Dev
/Dev: Behind the Scenes of VFX Updates

Learn more about the VFX updates process and how you can help!

VFX updates started out as a personal project a few years ago with Veigar (never forget the old Veigar cage ❤). Now, a few years down the line, we’re a small team of passion-fueled VFX artists working to modernize League’s roster and improve gameplay readability.

With more VFX updates coming, we thought it would be a great opportunity to talk about why we’re doing them, how we go about it, and how you can help us improve!

Veigar’s cage before and after the 2018 update

Unlike VGUs, VFX updates only affect the visual effects of a given champion, not all of a champ’s visuals. Most of the time, VFX are the spells they cast, or the effects that play around them when they emote. Explosions, magic, sparkles, you name it! There are a few exceptions to this rule, though. Occasionally the audio team might make a few tweaks or add new sound effects, and we may make small adjustments to animations or quickcast indicators if they’re really inaccurate (like Annie’s pre-update W). But when it comes to gameplay, models, textures, and character animations, there are no changes. This tight scoping allows us to ship VFX updates a lot faster than VGUs or ASUs (Art and Sustainability Updates).

Because VFX updates are a lot faster than VGUs or ASUs, we have a lot more free reign on which champions to tackle next. A huge factor for us is passion, but we also focus on the champions that need the update most. To figure out who this is, we have some goals we use as guidelines:

Our goals are ranked in order of importance, so gameplay readability will always prevail over thematic resonance, and the primary goal of VFX Updates will always be to prioritize the correction of inaccurate hitbox indicators.

Blitzcrank’s R, before and after his VFX Update

There are a few other things we have to consider when working on and shipping VFX updates. For example, just like our engineers have made strides to remove spaghetti code from the game, we’ve been hard at work removing the... marinara (blood) that dressed it. This is something we could get away with in the olden times, but not anymore, no matter how much it pains us (who doesn’t love some good marinara on their spaghetti code?).

We also try to add more flair to skins that under-deliver relative to their skin tier. That said, we have to be mindful of the time commitment when we’re approaching skin catalogs. Here are some general guidelines we follow when updating skins:

How We Approach VFX Updates

Are you still with me? Good! Now I’m here to tell you how we actually do the thing in seven simple steps!

How You Can Help

Because VFX updates are faster than other in-game updates like VGUs or ASUs, we don’t publish development blogs along our journey. That said, we still love to get your feedback! We always try to read as much as we can, but sadly we cannot reply to everyone. But if your feedback is constructive, helpful, and provides an alternative that we hadn’t run into before, there’s a chance we’ll follow up to get more of your insight! 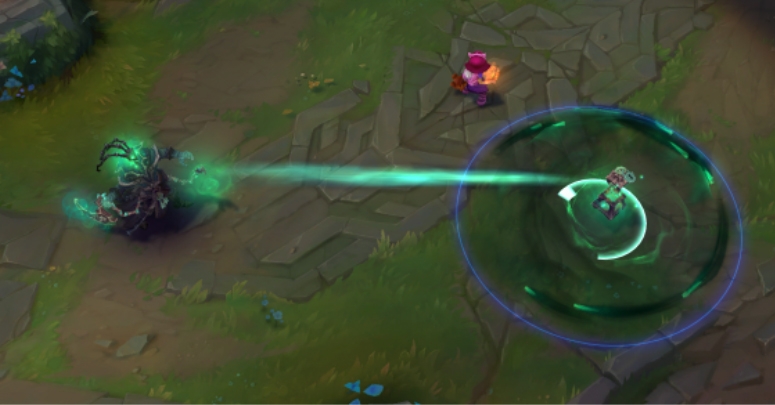 Working on the Thresh Lantern for his 2020 VFX Update

All this said, sometimes it can be hard to make feedback constructive, especially if we're talking about your main! Here are a few things we look for:

Specific feedback that points to a specific change is by far the most useful. This might look like “This skin could use a new Q indicator like the others of the same tier” or “This hitbox looks incorrect, can you take a look at it?” Or even, “The projectile isn’t very visible and is hard to read.” These are all examples of great actionable feedback that we can take a look at and address.

Vague feedback is hard to act on because it's less clear what would address it, and all-encompassing feedback (like adjusting theming) is usually out of scope for VFX updates.

Like all art, VFX can elicit opinions. While one person might love the original design, someone else could hate it. So saying “I hate the color green, can you change it?” unfortunately isn’t something we can solve. But we could potentially address “This color green doesn’t match the skin.”

3. Is it mostly unanimous?

This is a pretty big one. While we always try to make as many of you happy as possible, the reality is that not everyone likes the same things. We’re more likely to act on overwhelming consensus than we are a single person’s dissent (even a main's!).

Something else to note here is that League is a global game, so while something is trending in your language or region, that might not be the global response. At the end of the day we try to listen to the majority of people everywhere, not just the loudest! 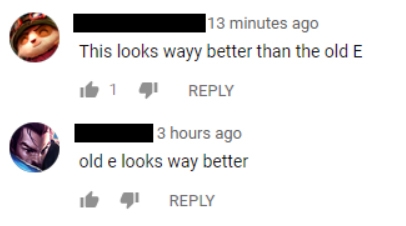 As a special callout, I just want to add that insulting an individual artist is never the right approach. Constructively calling out issues with the work is alright (encouraged, even!) but personal insults make it less likely that members of the team will want to keep working on these extracurricular passion projects. They also risk sending a signal to League leaders that VFX updates could be harming the community rather than helping it: Angry players + Discouraged devs = Not Worth.

We love getting your constructive feedback because it shows us you’re really passionate about this endeavor. This keeps us going and helps us make League a better game!

The Future of VFX Updates

We hope you learned something from this post! We haven’t talked much about the VFX updates process in the past, and that’s something we wanted to fix. Whenever a new VFX update happens and you see a post about it on social media channels, please don’t hesitate to leave your feedback! We always try to read as much feedback from all of you as possible.

And as for who’s getting the next VFX update... Well, that’s a secret! But don’t worry, we’re hard at work on more VFX updates to make sure your favorite champions get the sparkles and love they deserve!

Riot Sirhaian
Senior VFX Artist ― Kevin Leroy
Sirhaian loves everything that shines and blooms, especially if it's blue. He enjoys playing Annie, Teemo, Veigar, and Malzahar, and believes cats are better than dogs.