These posts will often contain talk about future work we're doing, or planning to do, that isn't yet guaranteed to ship. The nature of the work could change or, depending on what we discover, projects mentioned may get delayed or even stopped. If you'd like to see a Tweet whenever a new one of these posts goes up: https://twitter.com/RiotMeddler

Now that Clash has been out for a little bit we wanted to share a few details on how it’s going and what’s up next:

I also wanted to touch on our event rewards systems, with some context on how they’ve changed over time and then a bit on what we’re thinking for the future.

First off, looking at pass grind. The graph below shows the average number of games of SR per day during an event that were required to get that event’s prestige skin and how it’s changed over time. It covers the events from Battle Academia last year to our projections for the next event after Galaxies. Galaxies has separate columns for pre and post token buffs. Around Worlds last year, we realized the event pass/prestige skin system was much grind heavier than it should have been. We’ve been reducing that over time as a result, both by making rewards in general more available and by shifting rewards towards missions, rather than sheer number of games played.

With Mecha Kingdoms especially we felt we’d gone a bit too far in reducing commitment needed, both from the perspective of how exclusive prestige skins should be and also just from a revenue perspective. Event pass and related sales help fund things like game modes, ability to give away content in free missions/loot, etc. With Galaxies we pulled back as a result, though then realized we’d put too much grind back in. As a result we pivoted partway through Galaxies, putting more tokens into missions to reduce grind.

We’ll be adding more tokens again to weekly win missions for the next upcoming event as well, as per the May 2020 column in the graph, getting to similar levels as Worlds/Night and Dawn last year. 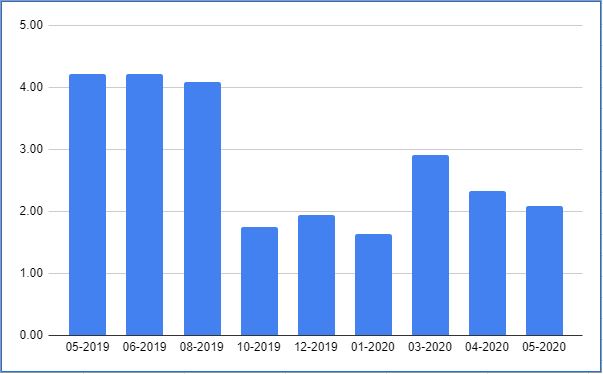 For anyone who wants to dig into the details more, here’s all the relevant data in table form. Some things to note here:

Looking to the future we think our event rewards, both free and premium, can be further improved. We’re working on moving to a track based system, like the one TFT and a lot of other games use, which should make it a lot easier to understand what rewards are available, how you’re progressing, what impact missions will have, which rewards you can get for free etc. We do want to ensure a higher degree of player choice remains as well though, in terms of what specific rewards you can get, which we think is a good aspect of the current system.

In terms of timing that work isn’t far enough along yet to talk about exact dates. We’re aiming for sometime this year though certainly.

TFT and the Galaxies system

Finally on the TFT side of things wanted to touch on the Galaxies mechanic that was added in 10.7. Our goal for it was that it should result in games where what was optimal was clearly different than normal, creating different decisions and therefore comps/experiences. Overall we think it’s doing a great job of that so far, giving a lot of game to game variety. It’s still a work in progress though certainly and we’ll be adding further galaxies over time, removing or reworking those that aren’t as enjoyable (or influence game outcome too much), tuning the frequency of how often galaxies show up etc.