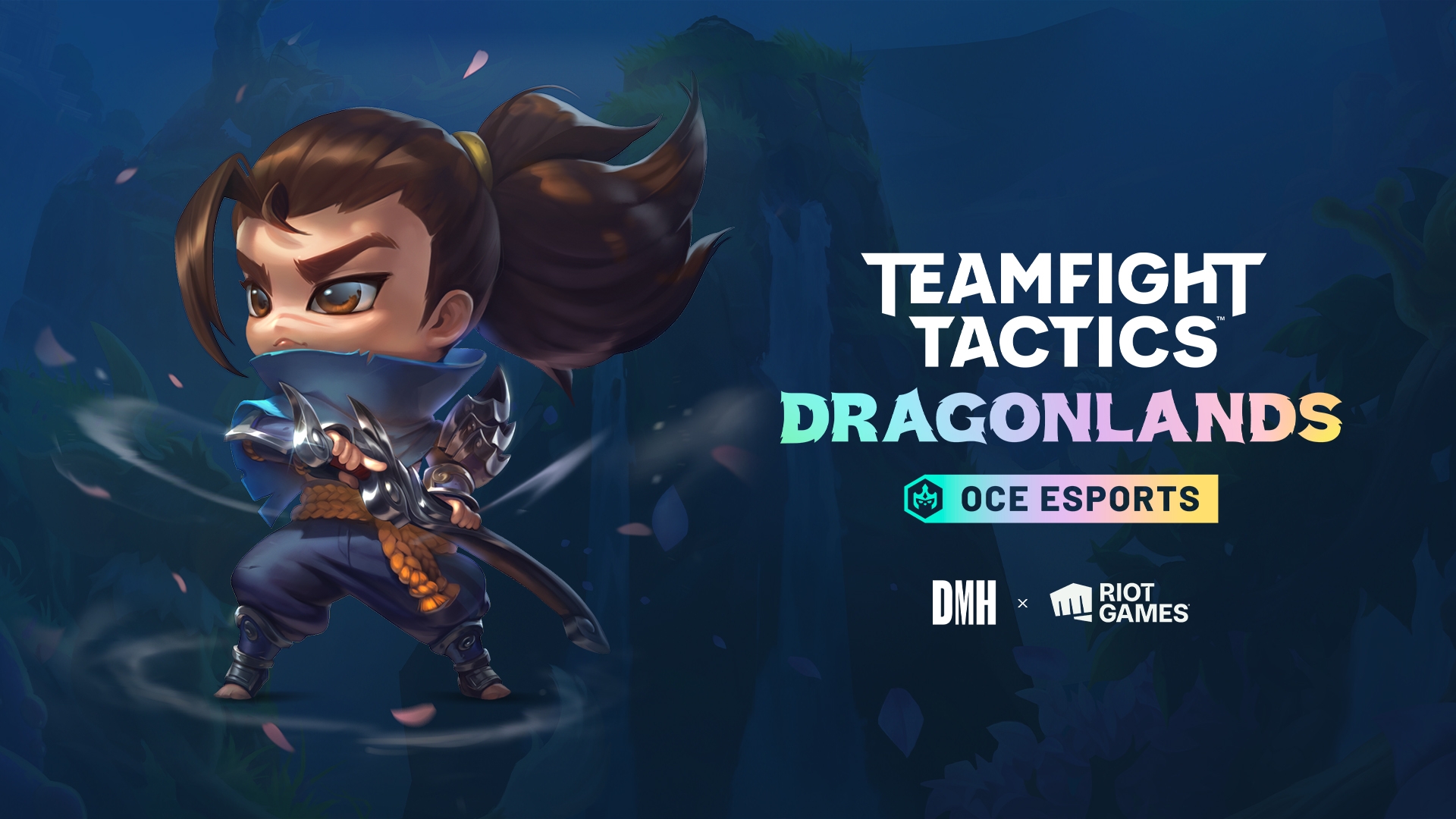 Get the full rundown on Dragonlands esports down under

We’ve partnered with Disorder Media House (ORDER) to bring Dragonlands esports to Oceania. After another top 8 showing at the Gizmos & Gadgets Championship, here’s the rundown on how the Oceanic TFT Dragonlands series will run!

With a combined prize pool of $13,500 AUD, we’re feeling fresh with the addition of a second World championship slot awarded to Oceania. With it, in Dragonlands, we’re bringing a brand new qualification pathway to life - the championship points ladder.

Whether you’re grinding the ladder for snapshot points, or signing up for one of our open qualifier cups, we hope you enjoy the new season of TFT esports here in Oceania. 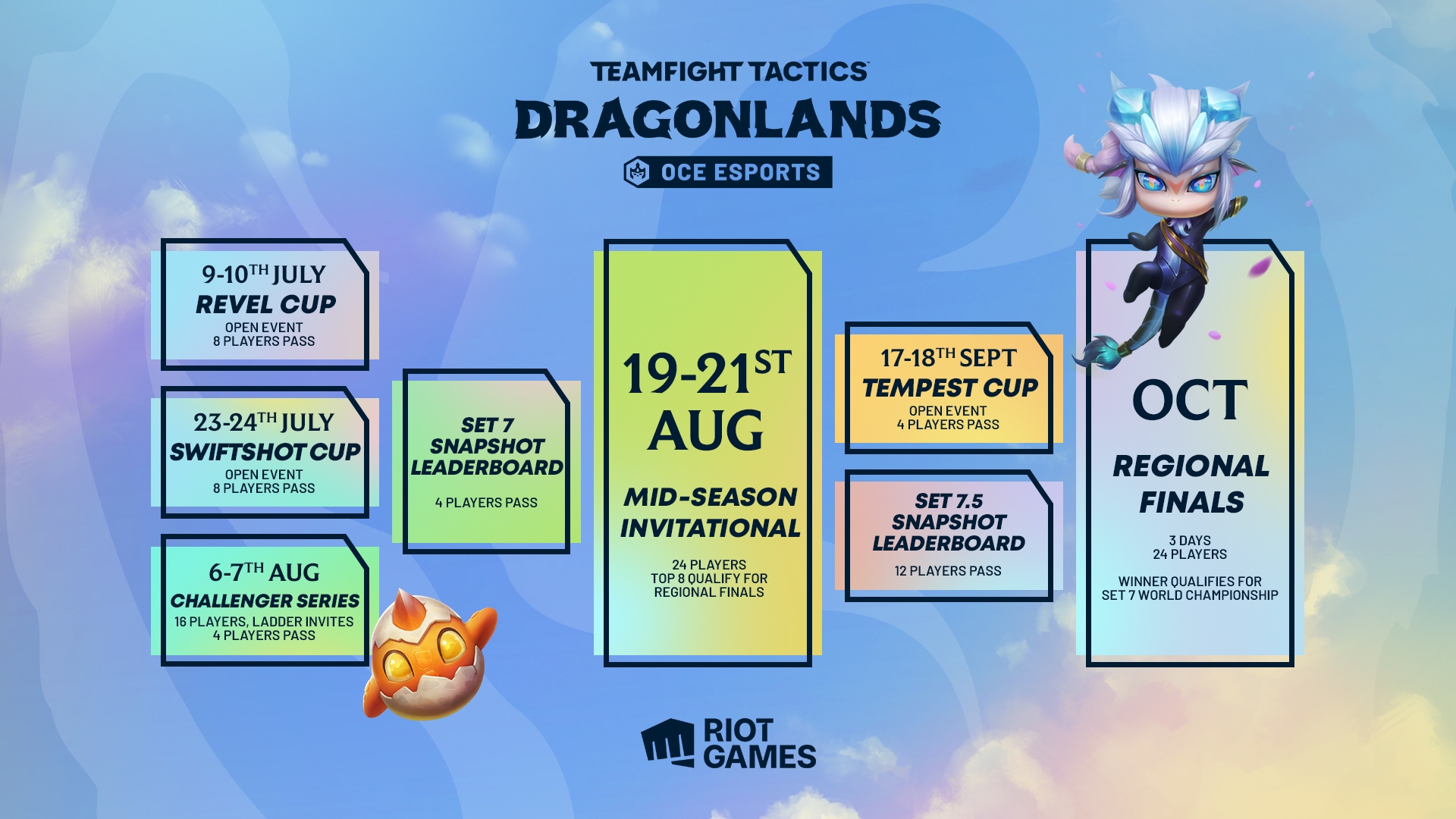 We will have three open qualifier events for set 7, with the top players from each progressing through to the next stage. The first event (Revel Cup) kicks off at the start of July and registration is open now - head to ocetft.com for the details!

In set 7, there’ll be little legend eggs up for grabs throughout the cups, stay tuned for more info on how and when they’ll drop for cup competitors.

The Oceanic TFT ranked ladder snapshots will begin on June 22 and will be taken each Wednesday at 12:01am AEST. The ladder leaderboard will reset when the set changes over to 7.5.

The rules for snapshots will be the same as before, but we’ll only be dropping every player’s lowest week in set 7, not 7.5 to help out competitors who suffer a rough patch. Snapshot points will also be included every week in the championship points system.

Brand new for set 7 is the championship points system. This aims to reward the most consistent players over the course of both set 7 and 7.5, with a special focus on tournament performances. Rewarding consistency and tournament performance was some of the most common feedback from players during the Gizmos & Gadgets series, here’s how it will work. 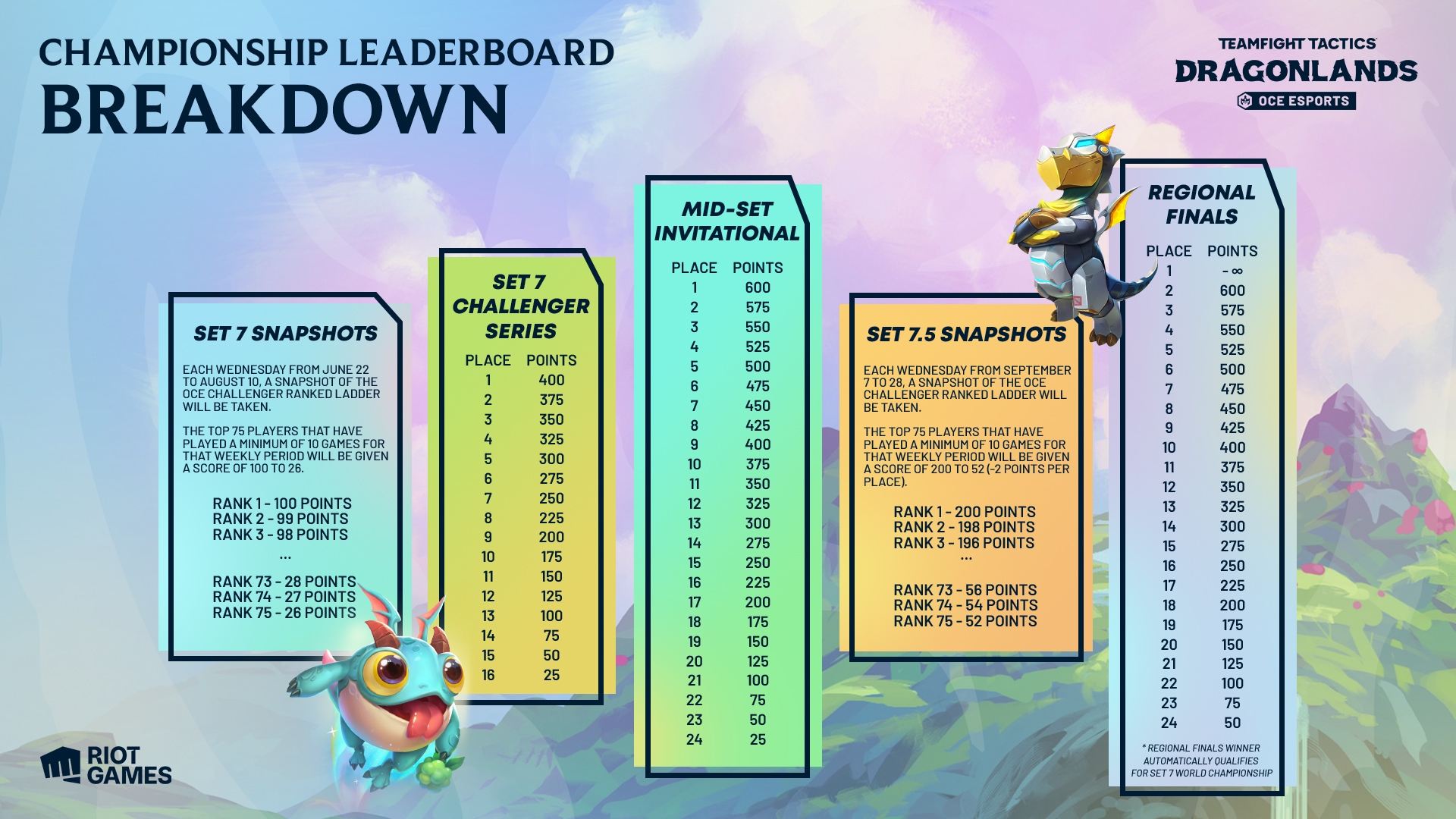 Competitors will be awarded championship points based on their placement in the following events:

Each event as the set progresses will be worth more and more points, putting greater emphasis on your performance in later events.

The challenger snapshots each week will also award points to your championship points leaderboard.

For more information and the full points breakdown, head to the official website ocetft.com

There might be only one of them in this set, but these closed, invitation-only events pit 16 of the top snapshot ladder competitors against each other over two days, with the second featuring the infamous checkmate format.

With a $1,200 prize pool and 4 invites to the Mid-Set Invitational on the line, you won’t want to miss this.

The Mid-Set Invitational returns for the third set in a row & will be held over three days in August to cap off the first half of the set!

24 players will clash for a prize pool of $4,500 and a chance at 8 slots directly into the Regional Finals in October. Players can qualify via 4 methods:

It all leads to this. The Oceanic TFT Dragonlands Regional Finals, the final stop on our domestic journey to find the two best tacticians who will represent OCE on the international stage.

While we’re not announcing the exact date just yet, the finals will be held in October and will be made up of the 24 best players in Oceania, featuring a prize pool of $6,500 AUD. You can qualify for the OCE Regional Finals in one of 3 ways:

The TFT Dragonlands OCE Regional Finals will take place in October of 2022.