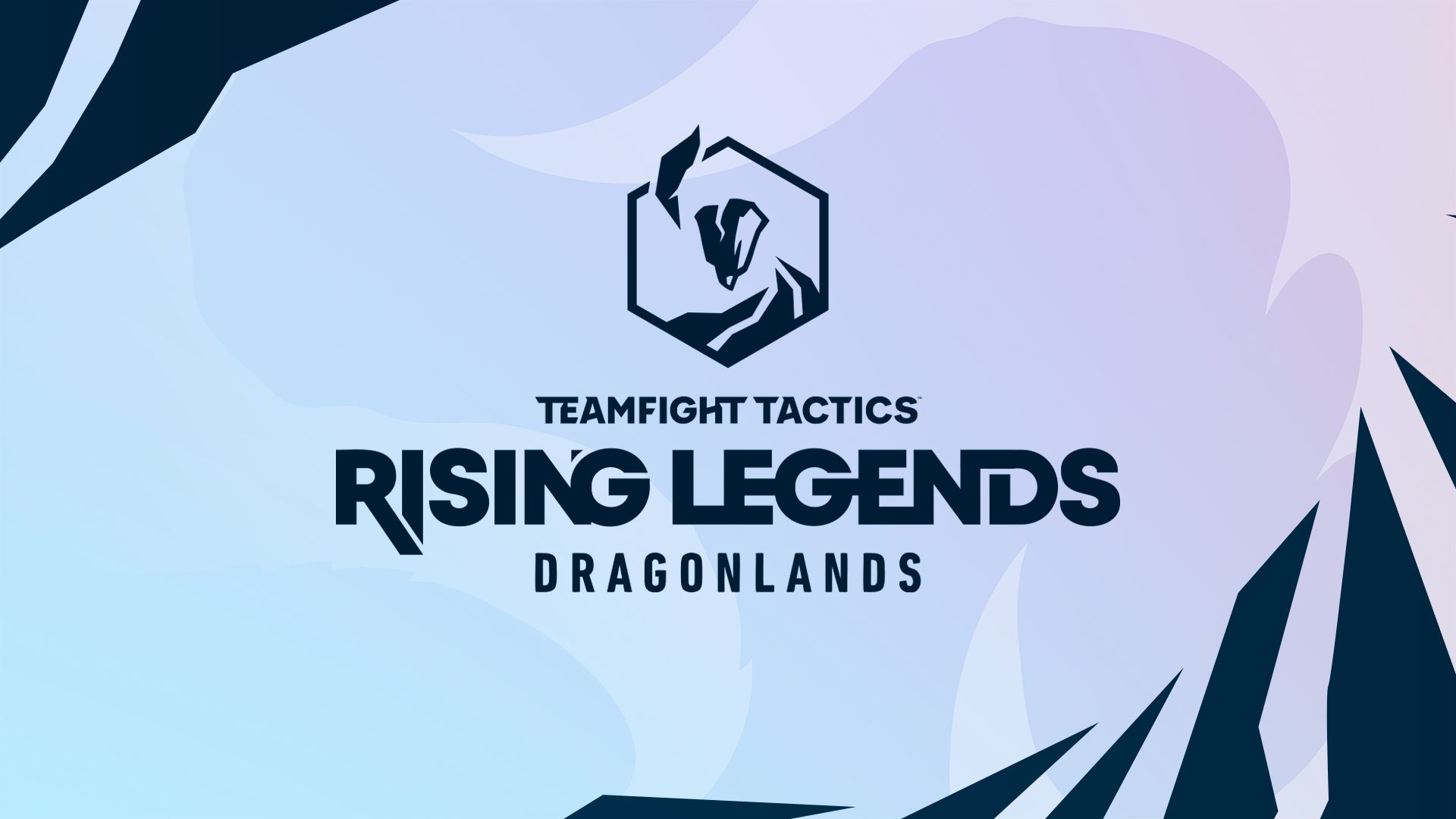 Esports
TFT Rising Legends is back with Dragonlands!

Tacticians all over EMEA are about to embark on a whimsical journey that will take them to the land of the Dragons! Through a series of Cups, Snapshots, and Regional Competitions, players will have plenty of opportunities to prove they are the best TFT player in the region. Next stop, the Dragonlands!

Rising Legends: Dragonlands will follow a similar structure as Gizmos & Gadgets, but we’re implementing a few tweaks to address some of the feedback you have provided.

The Circuit will still be based on a point system, with the winners and top 14 scoring players from the Golden Spatula Cups qualifying for the Rising Legends Finals. They will be joined by the 12 players from the Ranked Ladder and the best 3 Superbrawl players.

Tacticians that choose to prove their worth through the ladder will be able to do so in Dragonlands. Snapshots of the ranked ladder in each of the participating server regions (EUW, EUNE, TR, and RU) will be taken throughout 11 weeks and will grant Ladder Points to the top 100 players from each server region.

After those 11 weeks, the top 12 Ladder Points earners will get a direct pass to the Rising Legends Finals. 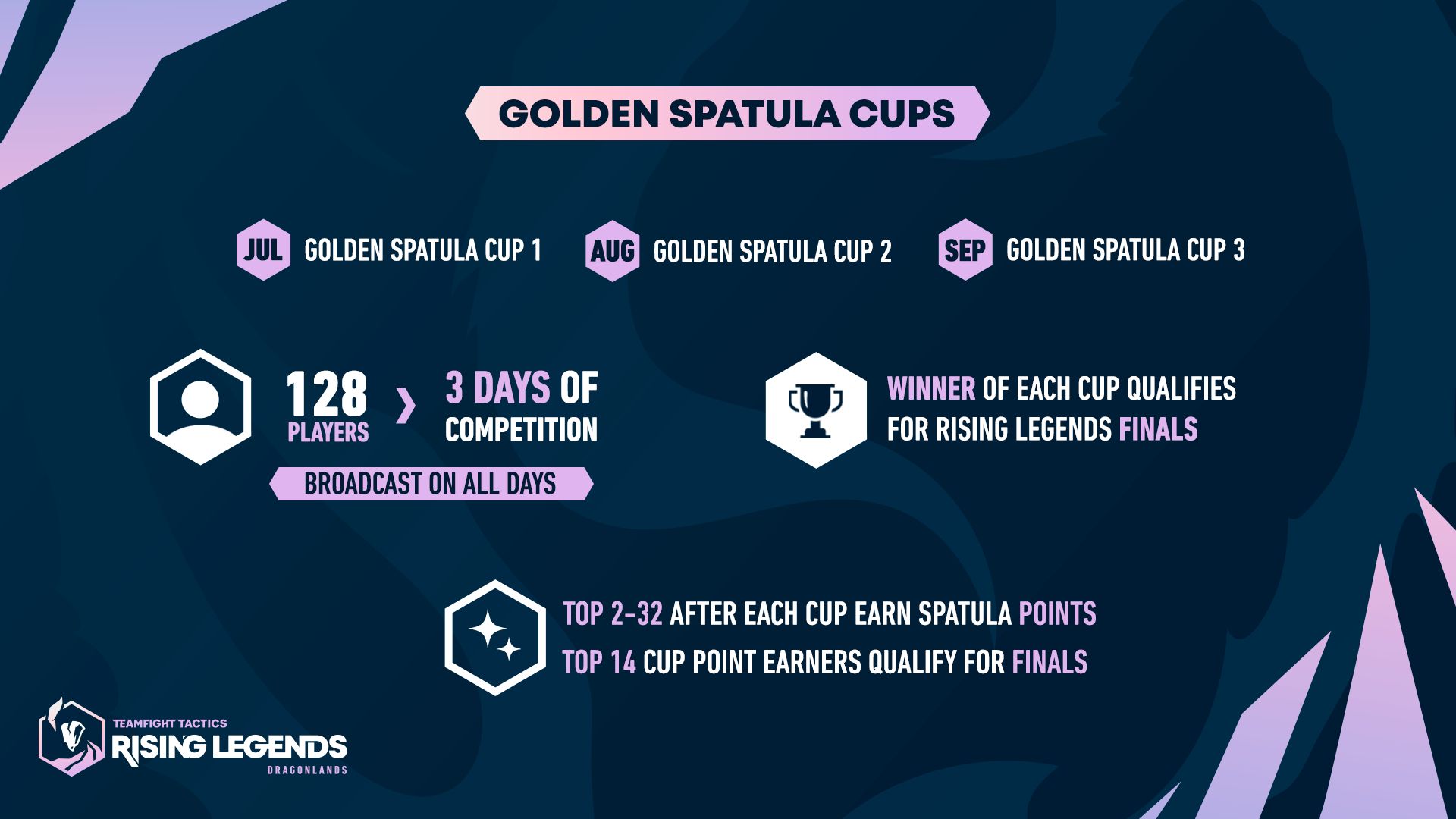 The Golden Spatula Cups will act as the main sanctioned tournament, with 128 players battling it out in a three-day competition. The winner of each Cup will automatically qualify for the Rising Legends Finals, alongside with the top 14 Cup Points earners. The prize pool for the Cups has also been increased to €8,000 per Cup, with the breakdown for each tournament looking like this: 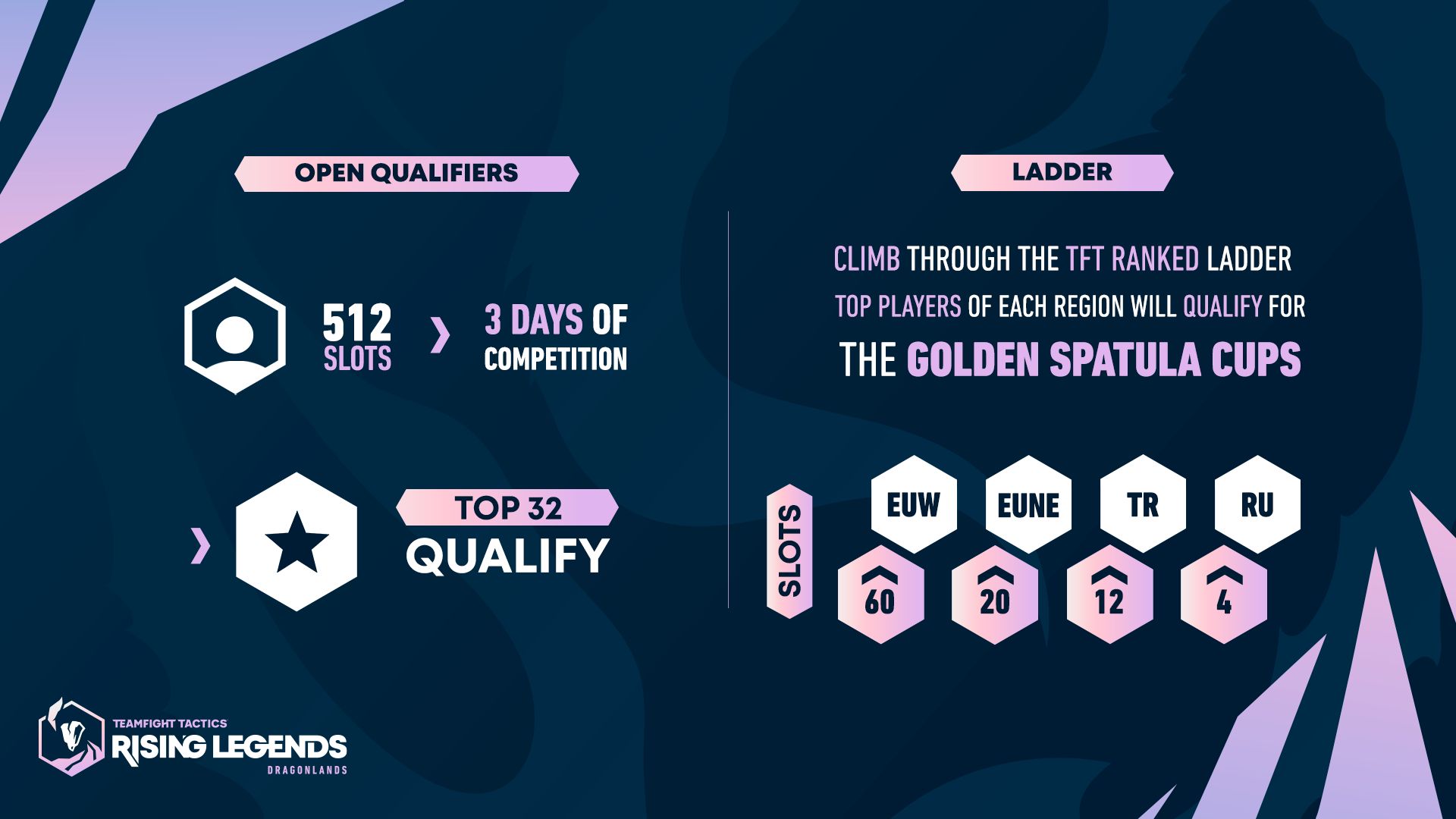 As in the previous season, tacticians will be able to qualify for the Golden Spatula Cups through Open Qualifiers and Ladder Points.

These Ladder Points will be granted to qualifying players in each region after the ladder snapshot. The first snapshot will take place on June 21 at 23:59:59 UTC+2, so make sure you’ve climbed the leaderboards before then! 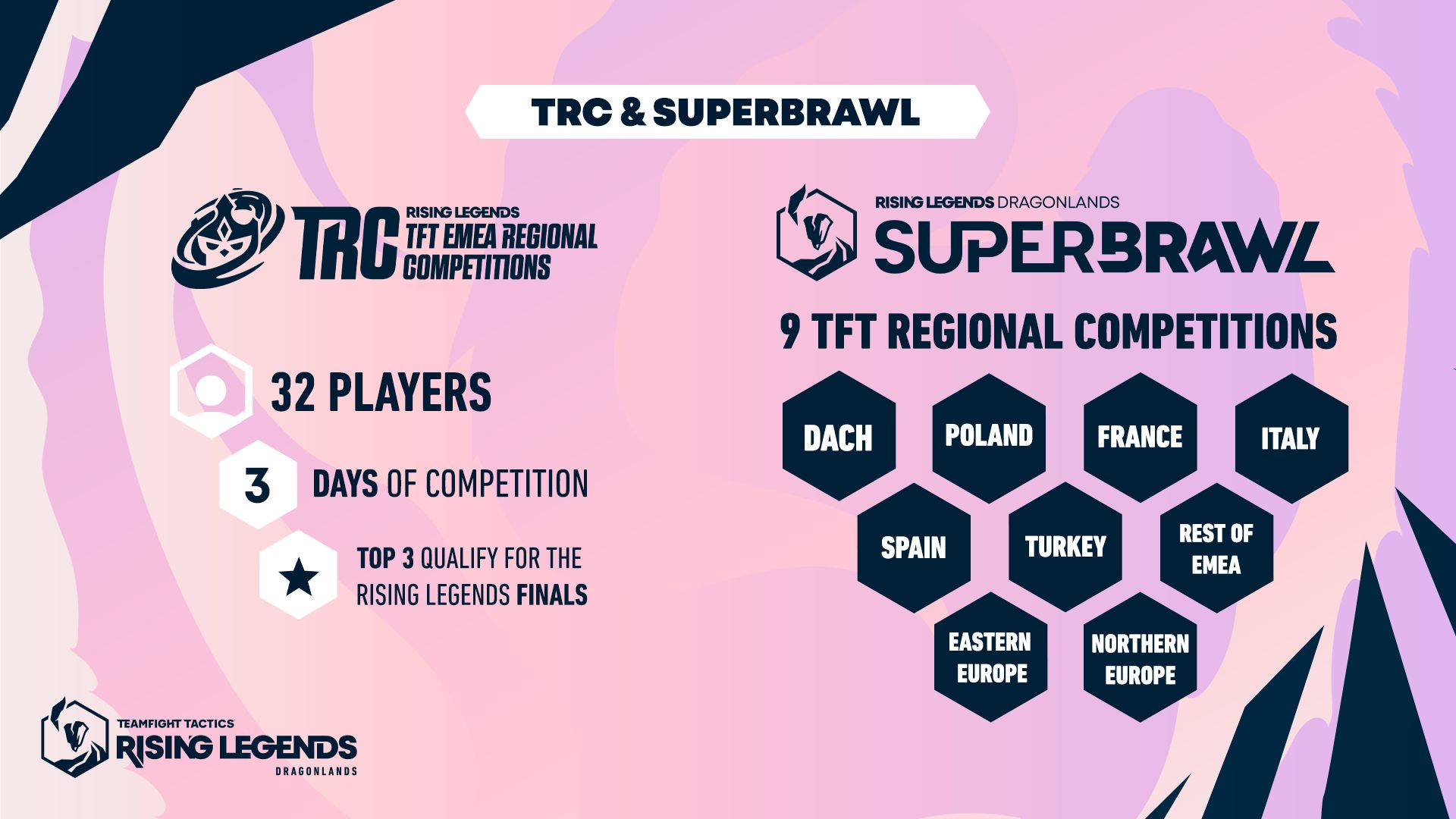 With Dragonlands we’re introducing the TFT Regional Competitions, or TRCs. These tournaments, which are sanctioned by Riot Games and run by local Tournament Organizers, will feed players into the Superbrawl.

The Superbrawl is seeing some small changes too. For starters, it won’t be a team-based tournament any more. While we love seeing tacticians cooperating for a common goal, we think game modes like Double Up are.

Additionally, we are increasing amount of slots for Poland, France, Spain, Dach, and EE to 4 which means expanding the player pool from 16 players to 32! Leading to having three slots in the Rising Legends Finals for the best Superbrawl players.

More info on each of the regions and TRCs will be shared in the upcoming weeks, so stay tuned! 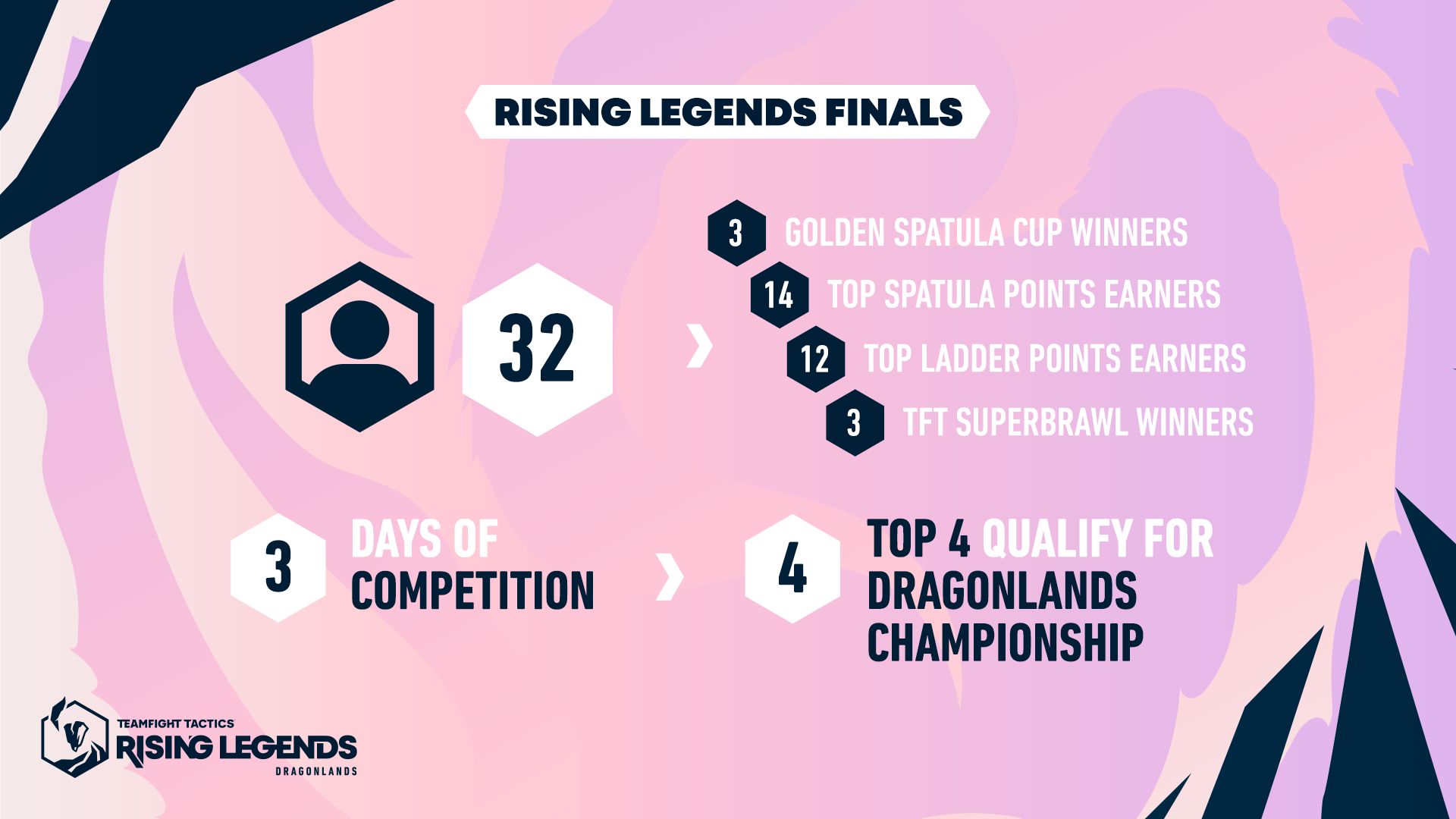 The season will culminate with the Rising Legends Finals, where the best 32 players from the GSCs, Ranked Ladder, and the Superbrawl will duke it out for the title of Rising Legends Champion, and the bragging rights of being the best TFT player in EMEA.

Just like in Gizmos & Gadgets, the Finals will run for three days. More info on the format will be shared on our usual channels. 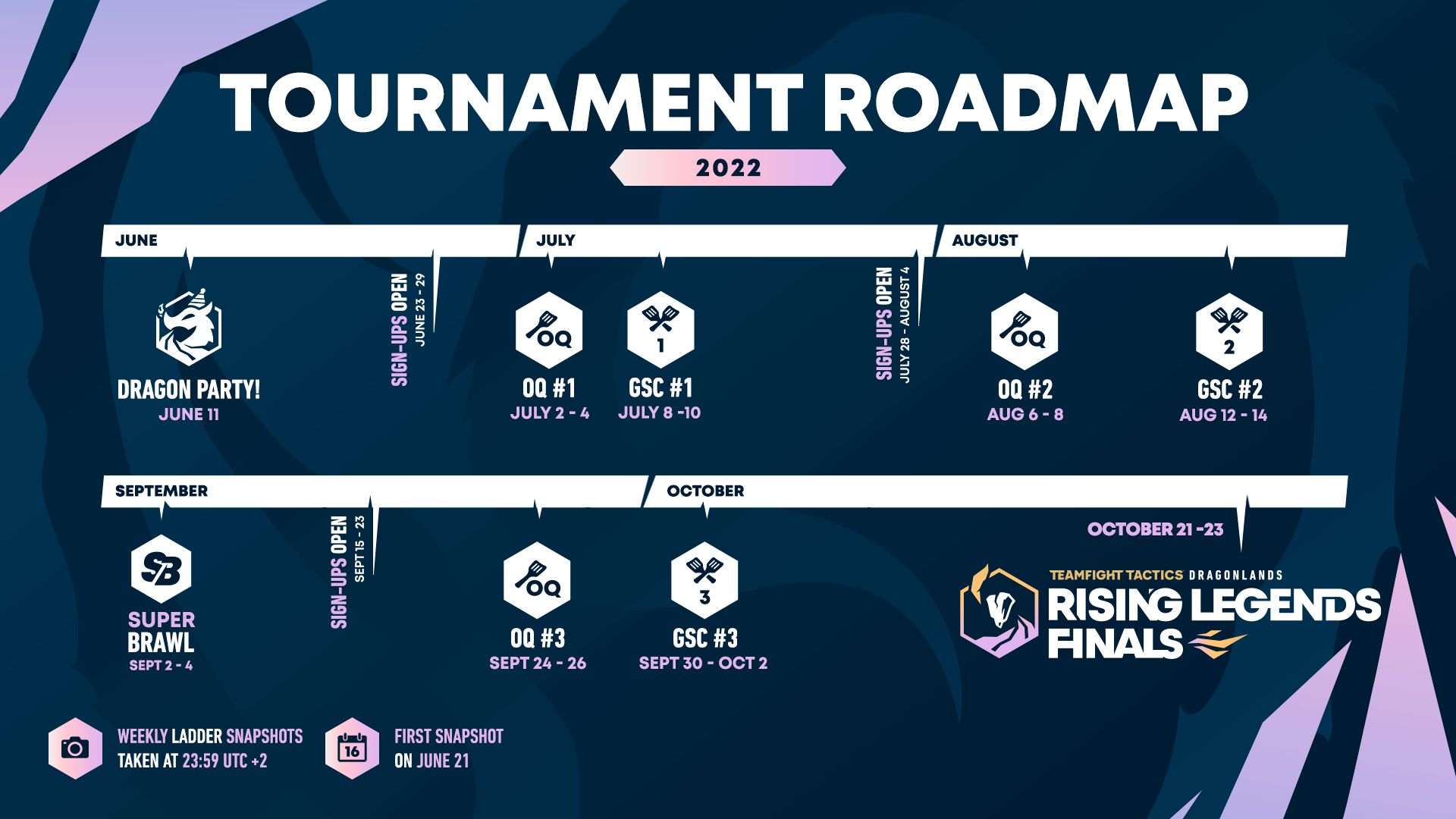 If you’re planning to participate in Rising Legends Dragonlands, don’t forget to register on the website. Sign-ups for the first Open Qualifier will open on June 22rd at 18:00 CET for one hour and remain open for challengers for 6 days.

More details on the competitive calendar and its different stops will be released at a closer date.

We have some updates regarding our broadcast too. In Gizmos & Gadgets we used to only broadcast the last day of each Golden Spatula Cup. In Dragonlands, we are leveling up and will provide broadcasts on all three days of the tournament, so you’ll get more content of your favorite tacticians.

In exchange, the Open Qualifiers will no longer have an official broadcast, but it will still be covered by selected co-streamers as well as the players themselves.

To celebrate this amazing lineup, we’re going to host a little gathering, and good news: you’re invited. On June 11 we will have our own Dragon Party! Where your favorite tacticians from EMEA and NA will give us a preview of what’s to come in this Set. 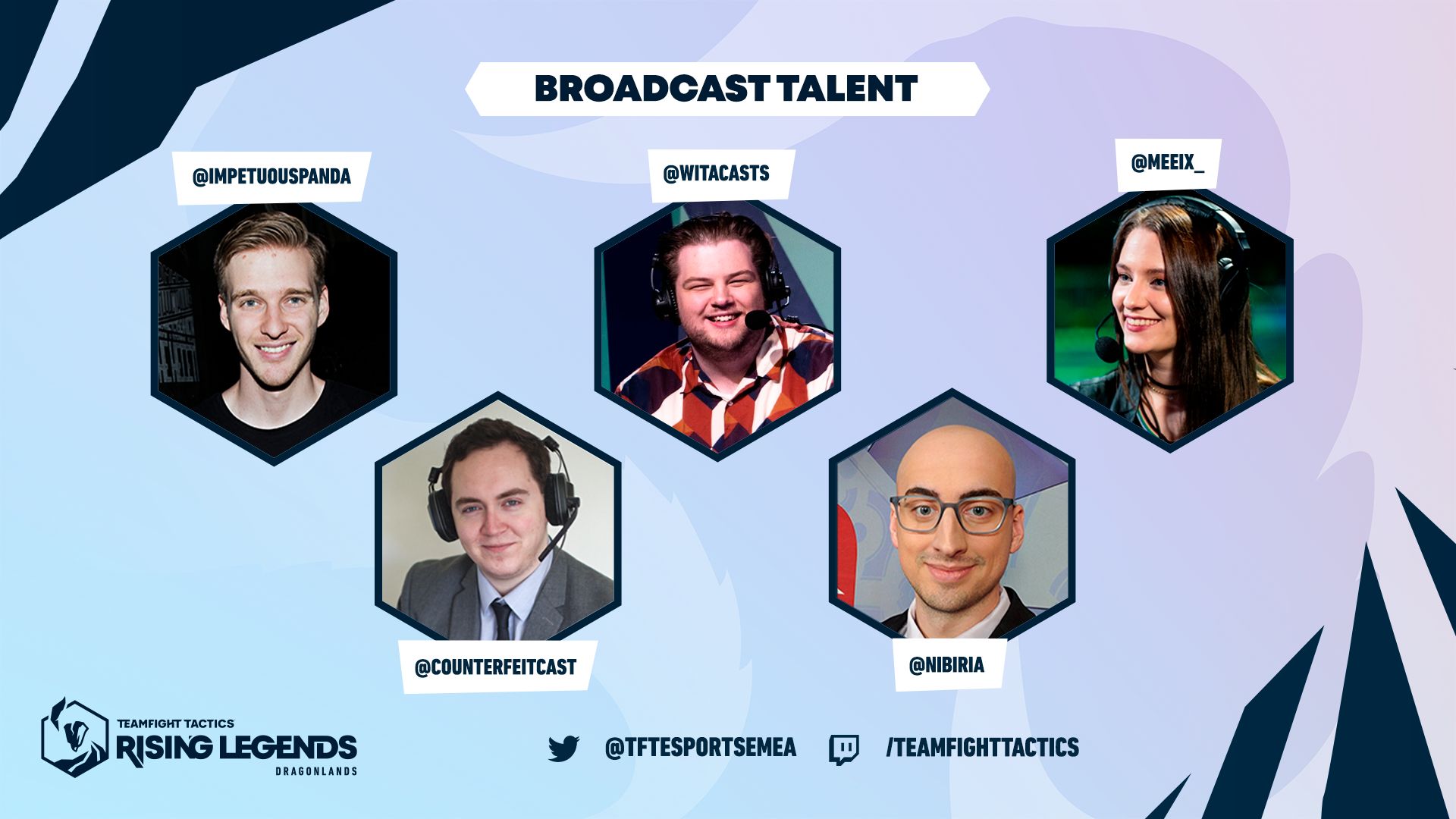 We just launched our new TFT Esports EMEA Twitter account, where we’ll feed you all the latest updates about Rising Legends. Don’t forget to follow us!

We hope that all these updates will make you as excited as we are for Dragonlands. We cannot wait for the season to start. Hear them roar!