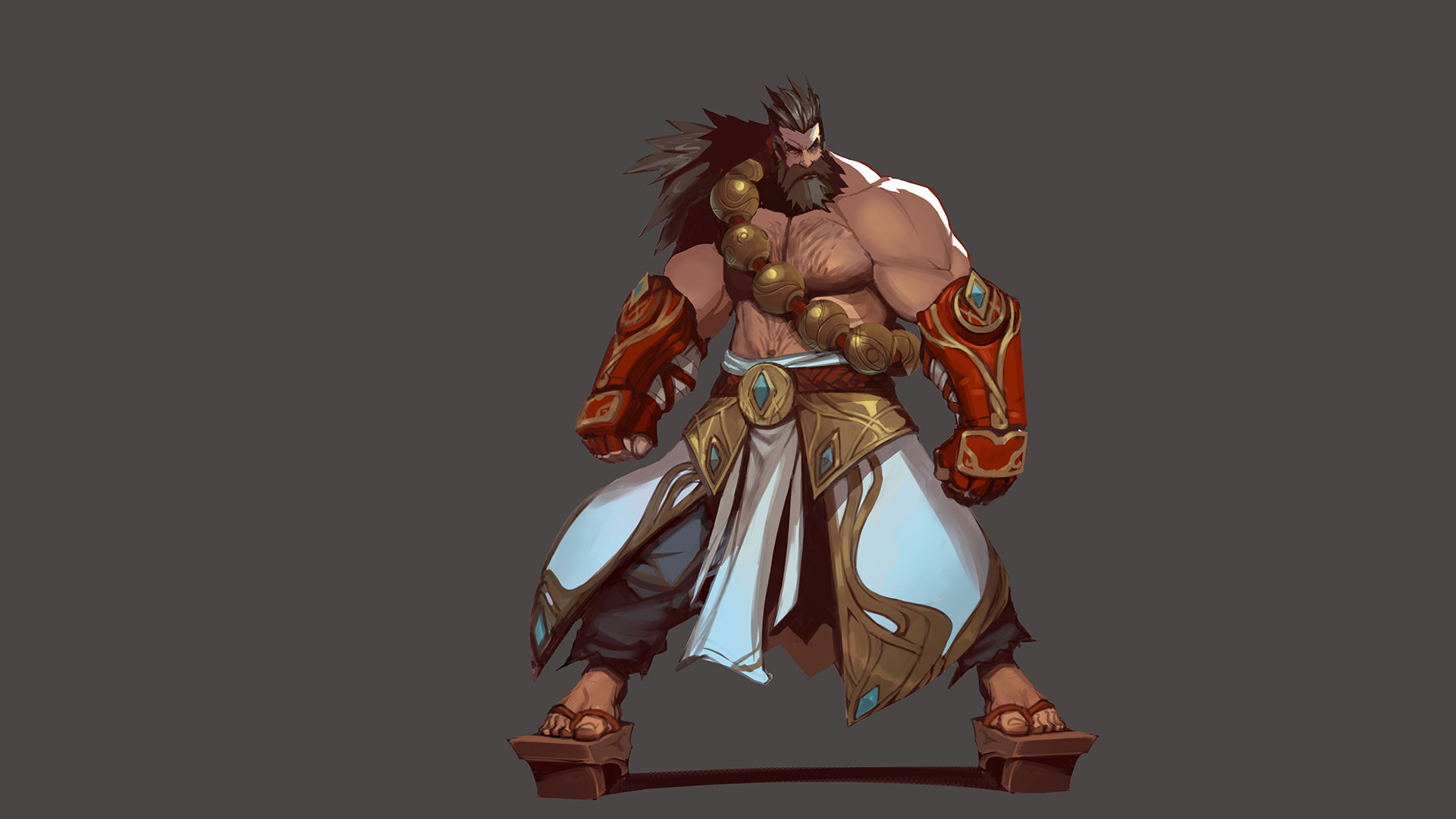 From “this should be base” to “he’s serving face”.

For years Udyr has been the embodiment of old League. Outdated graphics, simple kit, low poly model. He’s a relic of the old Summoner’s Rift, when raptors were wraiths and buffs had friends. And yet, he has an Ultimate skin.

Ultimate skins are the pinnacle of a champion’s fantasy. They’re a moment to celebrate the most exciting version of who they could be. But they’re also a ton of work. They’re essentially treated as new champions with new models, rigging, animation, VFX... the whole shebang.

Unlike skins where champions are cybernetically-augmented superhumans or UwU weeb teens, Spirit Guard Udyr is just more Udyr. The biggest difference between base and Spirit Guard is that where normal Udyr left Ionia to return to the Freljord, in Spirit Guard he decided to stay.

“Instead of rewriting Spirit Guard’s story, we took what already existed and expanded on it,” explains senior narrative writer Elyse “Riot apothecarie” Lemoine. “We knew he stayed in Ionia and didn’t return to the Freljord, so we asked ourselves why? What about Ionia kept him there? What was more important than the promise he made to protect Sejuani?”

The answers to these questions lie within the Hirana Monastery. Or more specifically, with a certain blind monk who trains there.

After training with Lee Sin in Ionia, Udyr achieves a level of spiritual calm and balance that he had never felt in the Freljord. And so he decides to stay in Ionia with his longtime friend and partner.

“In Ionia spiritual balance comes from harmony and coexistence. Udyr realizes that the world has a different idea of balance depending on where you’re located,” Riot apothecarie shares. “And as someone whose job it is to bring together the spirit and physical worlds, it’s his job to bring harmony and balance to them both. He achieves this global perspective of what it means to be a spirit walker, and it keeps him from returning home—for which he has a lot of regrets, but he’s also moving forward on this really intense journey in Ionia.”

So the team had the story. Udyr stays in Ionia to be with his roommate Lee Sin. They then used that to explore how the skin would look in-game. 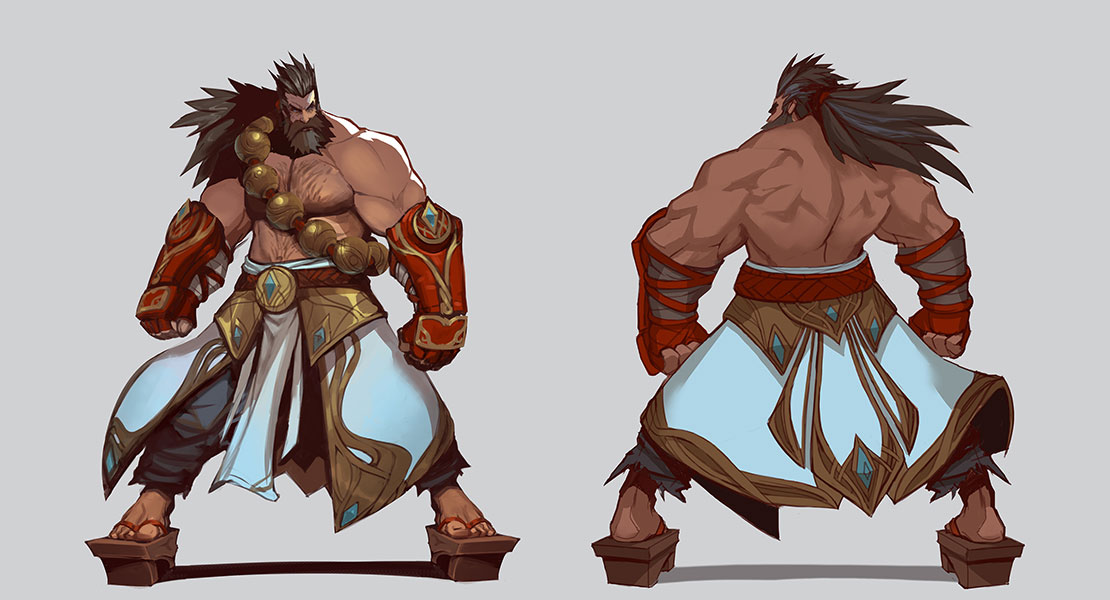 “When I began thinking about what an updated version of Spirit Guard Udyr would look like, I knew we wanted to deliver on the narrative story that Riot apothecarie landed on. So instead of trying to reinvent the skin, we just wanted to focus on modernizing,” shares senior concept artist Justin “Riot Earp” Albers.

Similar to Udyr’s new base, the updated Spirit Guard skin features Udyr in his gloriously new bulky stature with a few... minor differences.

“It was important to us that we keep Udyr’s body-type representation close to the strongman that we were using for his new appearance. But unlike his base skin, Spirit Guard reflects his lifestyle of living and training with the discipline and balance he’s experiencing in Ionia. All of this reflects back on his body. So it’s very similar to his base, except he’s got a little more definition and tone,” Riot Earp laughs.

A slightly more muscular physique isn’t the only thing from Ionia that made it into Spirit Guard Udyr’s skin.

“A lot of the visuals I did for Spirit Guard Udyr were based off of the world guide for Ionia that the Legends of Runeterra team made. A lot of the shape language for their architecture, the patterning for their clothing, even the symbols in their calligraphy,” says VFX artist Luis “Riot Bloois” Aguas. “I tried to blend that Ionian style with the Freljordian demigod-inspired style we landed on for his base. Because this skin is really a mixture of those two parts of Udyr.”

The team felt they had a good foundation for who the updated Spirit Guard Udyr would be. But there was just one problem: The new-and-improved Udyr left his former spirit animals in the dust. What would that mean for Spirit Guard Udyr? Would this version of the big ol’ beefcake call to his new Freljordian spirits in Ionia? Or would he find new spirits in Ionia to guide him on his journey?

“We decided to keep the original spirit animals when updating Spirit Guard because we felt it would be a good way to give back to original Udyr players. It’s a nice nod to his original spirits, but they also feel right at home in Ionia,” Riot Earp explains. 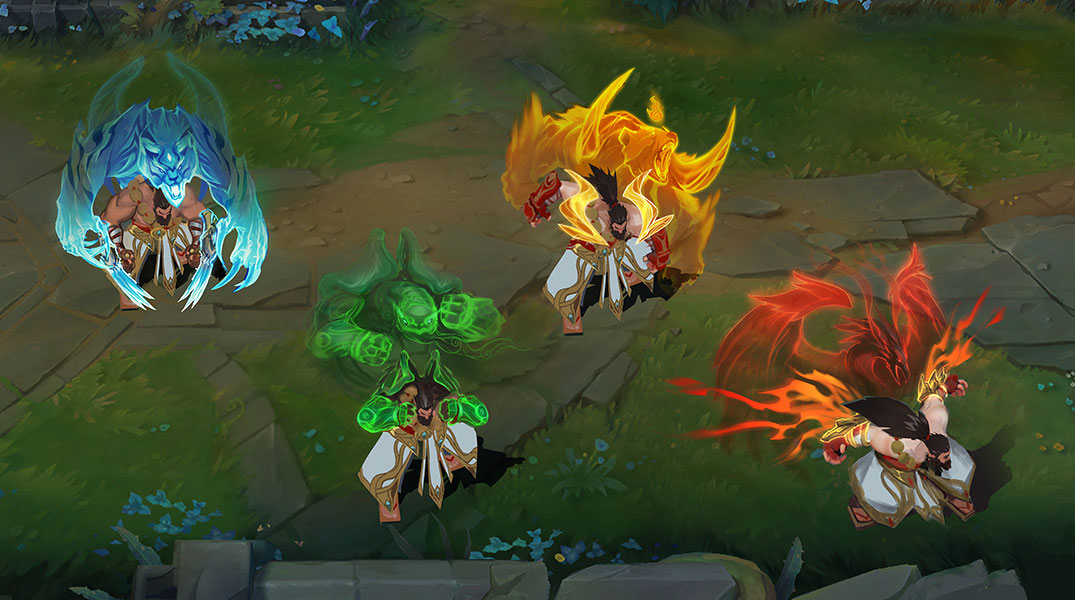 Part of the reason Spirit Guard Udyr chose to stay in Ionia is due to the peace he found with the spirits there.

“One of the biggest differences between base and Spirit Guard Udyr is that in his base he has a slightly more contentious relationship with the spirits he channels. Spirit Guard Udyr’s relationship is much more symbiotic,” shares Riot apothecarie. “He has formed individual relationships with each of these spirits, and understands their unique personalities. They have a mutual respect and understanding. So when he channels the Ionian spirits he actually walks with them—he projects both of their thoughts and they speak as one.”

To show this symbiosis, the team wanted the spirits to physically be with Udyr.

“At one point I pitched an idea that the spirits would be on at all times and would mimic Udyr’s attacks and abilities. It was cool in practice, but it got insanely busy insanely fast,” recalls Riot Bloois. “We ended up cutting it because there wasn’t enough Udyr on the screen, and it started to feel like the character was more about the spirits than about Udyr himself. So we looked for other opportunities to showcase the spirits.”

One of the ways the team did this was to focus on his Awakened and fully upgraded forms. How could they make these feel as cool as possible?

Part of Udyr's new kit is to Awaken his spirits. He unlocks their truest potential and empowers their base gifts. When Udyr Awakens a stance, the corresponding spirit animal appears.

“Turtle stance was really challenging to figure out. I always pictured Udyr as a mountain man living in the woods, but there’s an elegance to his Spirit Guard skin that you don’t have in his base,” says senior animator Eric “FattyLeesPlease” Lees. “His activations are all really, really quick. Riot Bloois did an amazing job of making everything clear and readable, but I had maybe 10 frames of animation to sell the spirit coming out. Turtle’s protective and solid, but still harmonious. There’s really only so much you can do. I hope it landed somewhere that really sells that, and that it plays up the spirit turtle’s personality.”

In addition to Udyr’s evolution forms, they also decided to focus on his weapons.

“We wanted a way to differentiate from base where he has spirit arms on top of his normal man arms. So we carried over the weapons that he has on the pre-rework skin,” Riot Earp shares. “He has spirit claws in tiger form, magic spirit turtle shell armor, golden celestial shoulderguards for the bear, and then fiery arm gauntlets for the phoenix. And when you max them out they all become empowered.”

Udyr’s a big boi. In personality. In spirit(s). In size—both in- and out-of-game. But League needs to be able to run on a potato. A huge amount of players only have access to 32-bit processors. So while the team was figuring out how to make Spirit Guard Udyr live up to his Ultimate status, they also had the challenge of getting it within the allotted memory constraints.

“Everything in League has a memory budget. Each champion, skin, emote, even the map itself. Champions are allotted 20Mb of memory, Epic skins get 25-26Mb, Legendary 26-27Mb, and Ultimate skins get a max of 28Mb,” explains rigging technical artist Dawon “Riot WONY” Lee. “I often say no to some concept and ideas to keep things within budget. But Spirit Guard is an ultimate skin, and we wanted to give a new experience to players. So I had to try not to say no to a lot of ideas, and instead we tried to cut down on memory elsewhere.”

Between the base stances, max stances, Awakened forms, spirits, weapons, emotes, and dad bod, the team needed to find ways to cut down on the “cost” to make sure they could deliver on the feeling of an Ultimate skin.

One of the ways they achieved this was by re-using rigs and models.

“We worked really closely with our creative studio in Hong Kong to make sure that we were being smart with our modeling resources,” says 3D character artist Jason “00Y00” Namgung. “It took a lot of thought and planning to make sure Udyr didn’t have three unique models for every stance, with base spirit, Awaken, and max stance... Plus his non-spirit base stance at the start of every game. That would just be so many resources in the files.”

The team tried to reuse as much as possible, treating each stance’s evolution as additive instead of a transformation. Basically this means that Udyr’s stances each have a single model, with visual effects and bonus models signifying the difference between each level.

“Yeah, the spirit animals themselves also share the same rig, so we didn’t have to use as many bones and joints for them,” adds Riot WONY. “The main difference between them is their animations and obviously the physical appearance, but underneath all that they’re really one model. We also tried to cut down on his hair textures. Texture files are often the biggest ones in-game, so we wanted to keep those simple and limited.”

That’s right. Hair. Did you really think we’d skip over the ponytail?

“Udyr’s ponytail is a pretty hot button issue,” laughs Riot Earp. “Some people love it, some hate it. But he needed some value breakup. We also wanted an easy base hairstyle to differentiate from his upgraded hair in each Awakened stance, and that’s where the ponytail comes into play.”

“I think it fits his character more, too! He’s a more refined, elegant champ now. Having his hair in his eyes just doesn’t fit anymore,” adds FattyLeesPlease.

“Ponytail lover or not, I’m obsessed with the turtle stance braid. Ionian spirits should be hairdressers,” Riot apothecarie jokes.