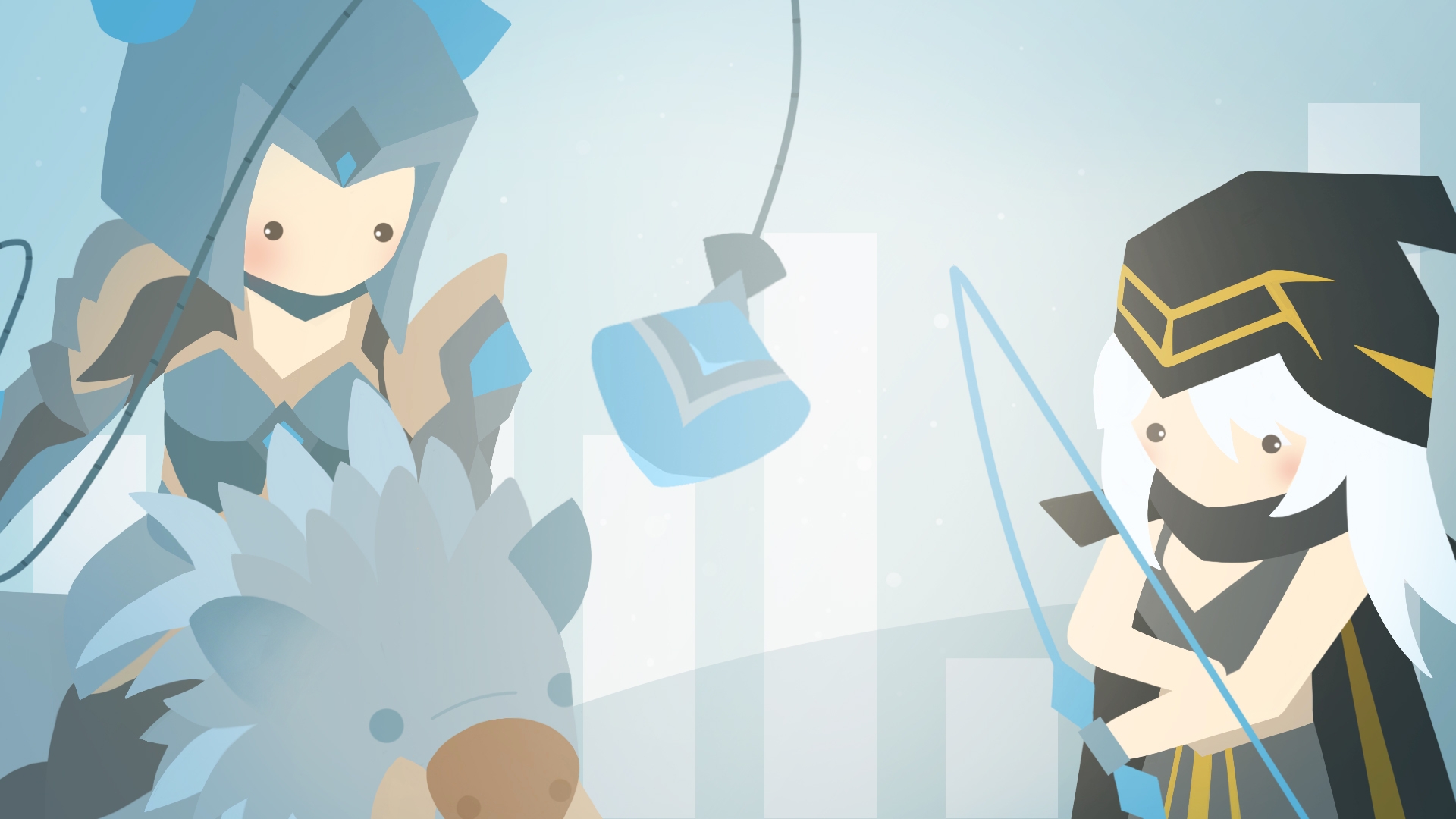 Lee Sin? Thresh? Yasuo? Thanks to data—and colorful graphs—we can tell you which champions are really the most popular.

Hi everyone, NovaAsterix here to reveal some secret tools we use to measure champion popularity at Riot. Hint: There’s more to it than doing a quick champion.gg search, and it involves a lot of data.

When we measure a champion’s popularity, we break it down into two dimensions known as breadth and depth. Each of these measures a different (but equally valuable) type of popularity, and together they create a comprehensive representation of how popular a champion really is.

In this equation, breadth is the number of unique players who played a champion during any given time period (such as a patch). If you, your friend, and your feeding top laner all played Riven, you’re collectively adding to Riven’s breadth score for that time period.

Depth is the average number of games played on a champion per player during any given time period. If you’re the only Yorick player in your crew, but you play the shit out of him, you’re single-handedly contributing to that champion’s depth score.

Breadth and depth can be used as two axes of a graph, and each of the four quadrants created represent a different type of champion popularity… or unpopularity. 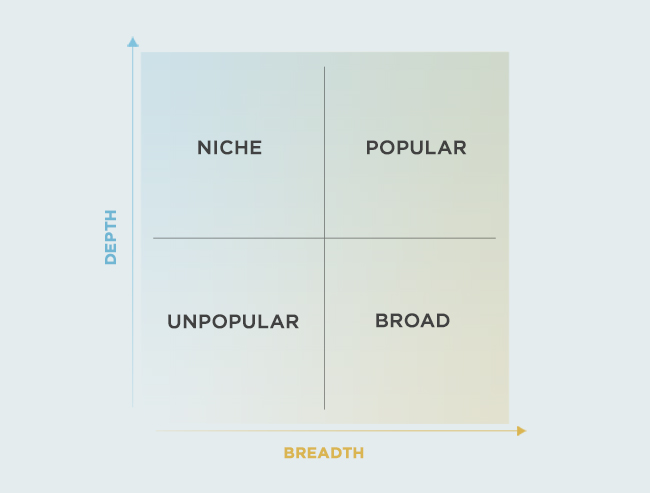 Popular and unpopular champs are pretty straightforward. We see popular champs in many games (and even in recent Clairvoyance Blogs); they have high breadth and depth scores.

Niche champions show up in games occasionally, and when they do, it’s likely a one-trick who’ll be a pain to deal with, like an Illaoi main. Niche champions score high in depth but low in breadth.

A broad champion is often relatively simple to play and understand, so more players might occasionally play them on a whim, like Annie. These champs rank high in breadth but low in depth.

It’s worth noting that broad and niche champions can be similarly popular, but how they’re popular differs greatly—one is through the number of unique players and the other is number of games per player.

Here’s what all of the champions’ popularity looked like as of Patch 7.16. 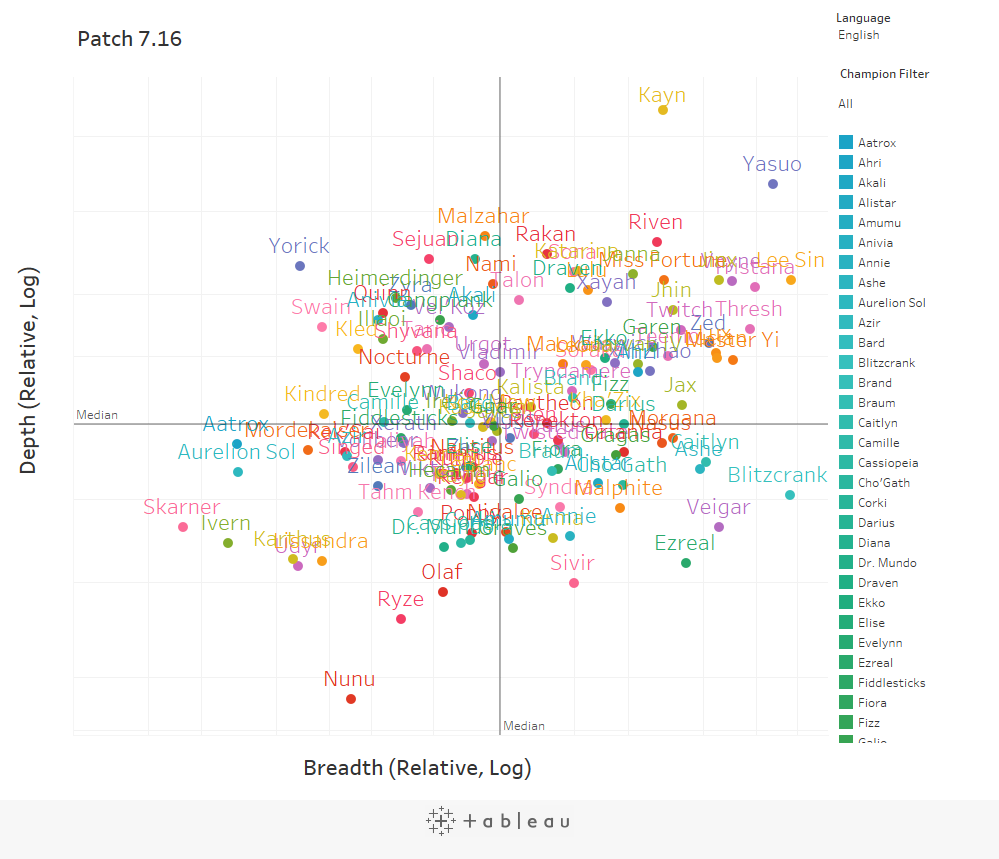 It’s important not to jump to conclusions off of a single patch. A champion could be strong, or just picked up in pro play, or maybe gotten a fancy new skin, like the Star Guardians. All these things can impact popularity in a single patch.

When we extend the timeline back, way back to Patch 5.24, we get the following, self-explanatory graph. 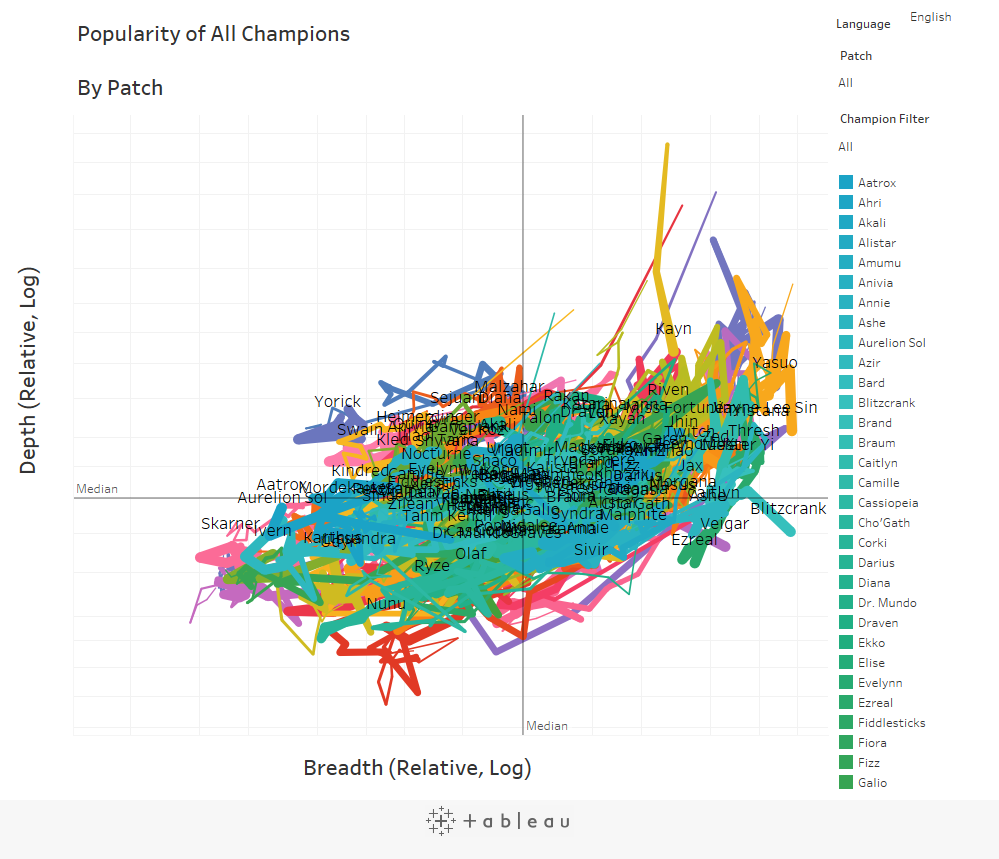 The beautiful art can be found at your local museum in the Jackson Pollock collection. But in all seriousness, there’s a lot of information tangled in this mess of colorful noodles. Let’s dig in.

(Note that each inflection point represents a patch, and the line connecting the points becomes thicker as the patches become more recent—so thickest part of the line = most recent patch.) 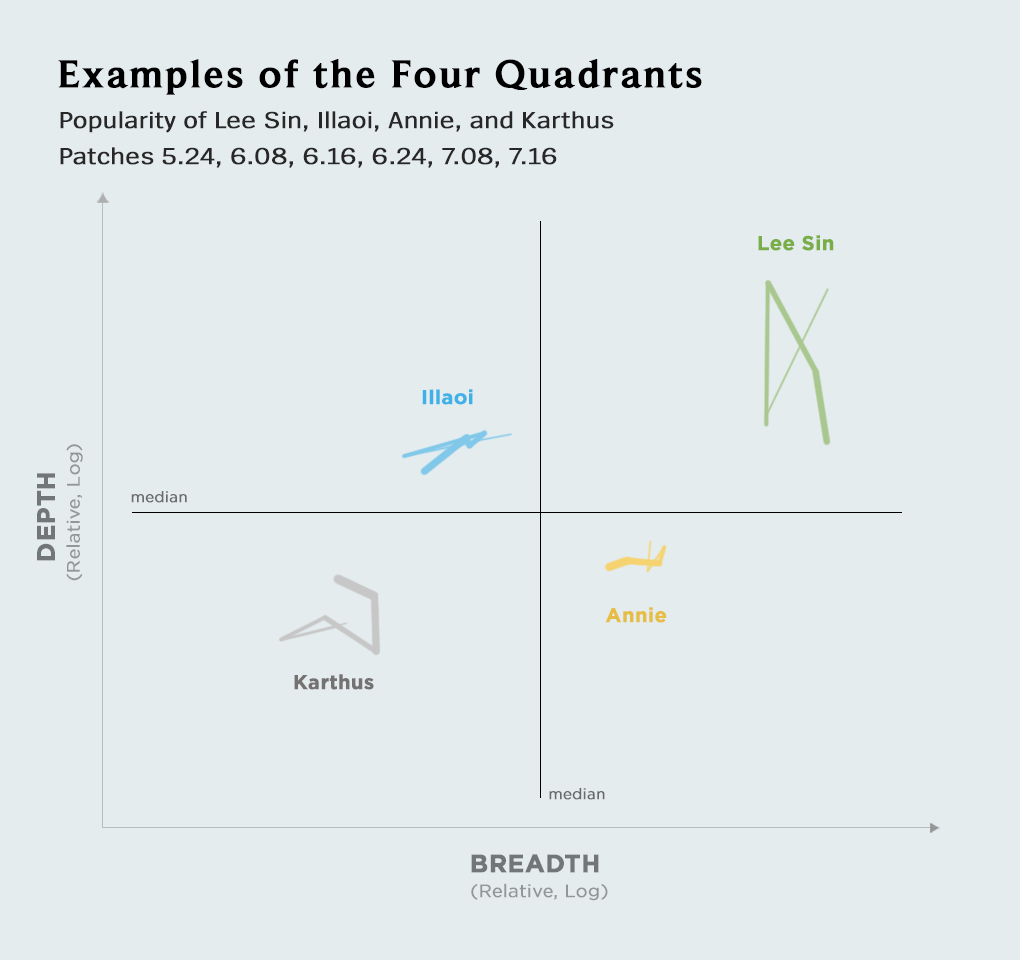 Going back to the four quadrants, here are a few examples of champions who’ve stayed within their boxes. Illaoi has been niche for a while, whereas Annie continues to be an easily-accessible broad champion. There’s the always-popular Lee Sin, and the unpopular-as-ever Karthus. This graph shows what it looks like when we talk about a popular, unpopular, broad, or niche champion. 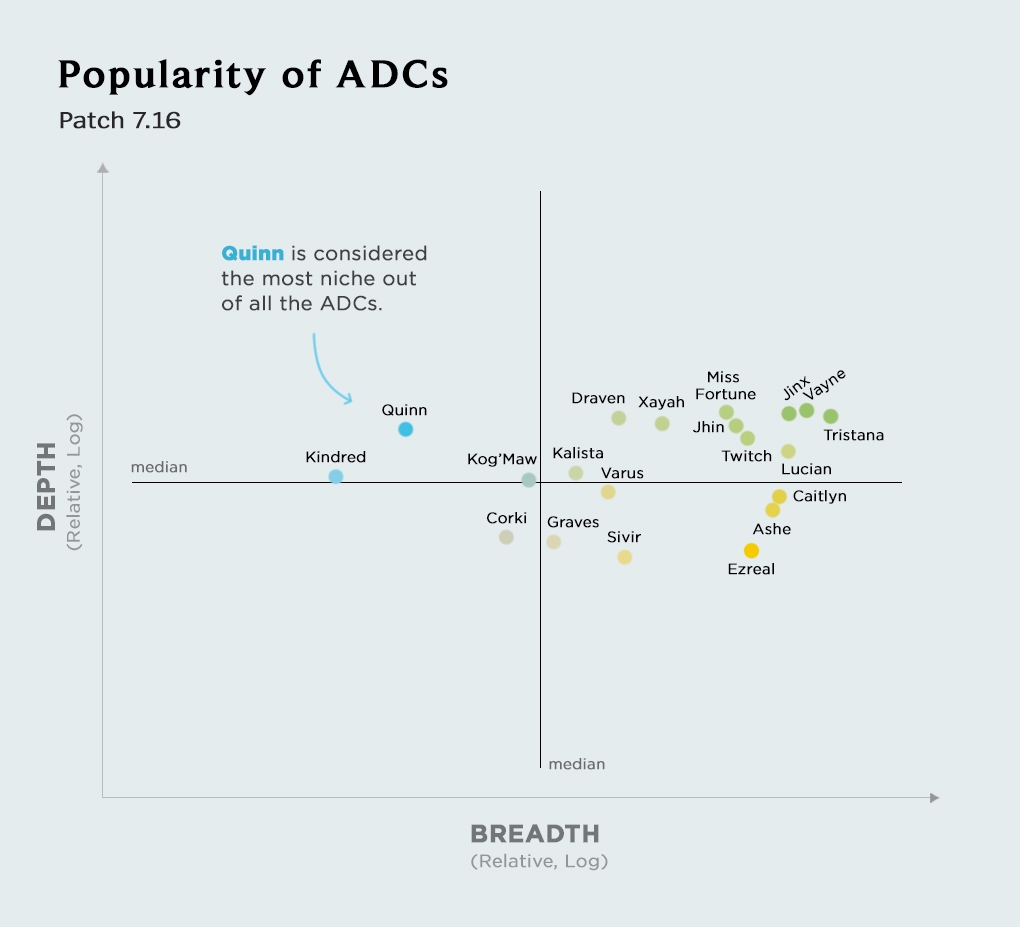 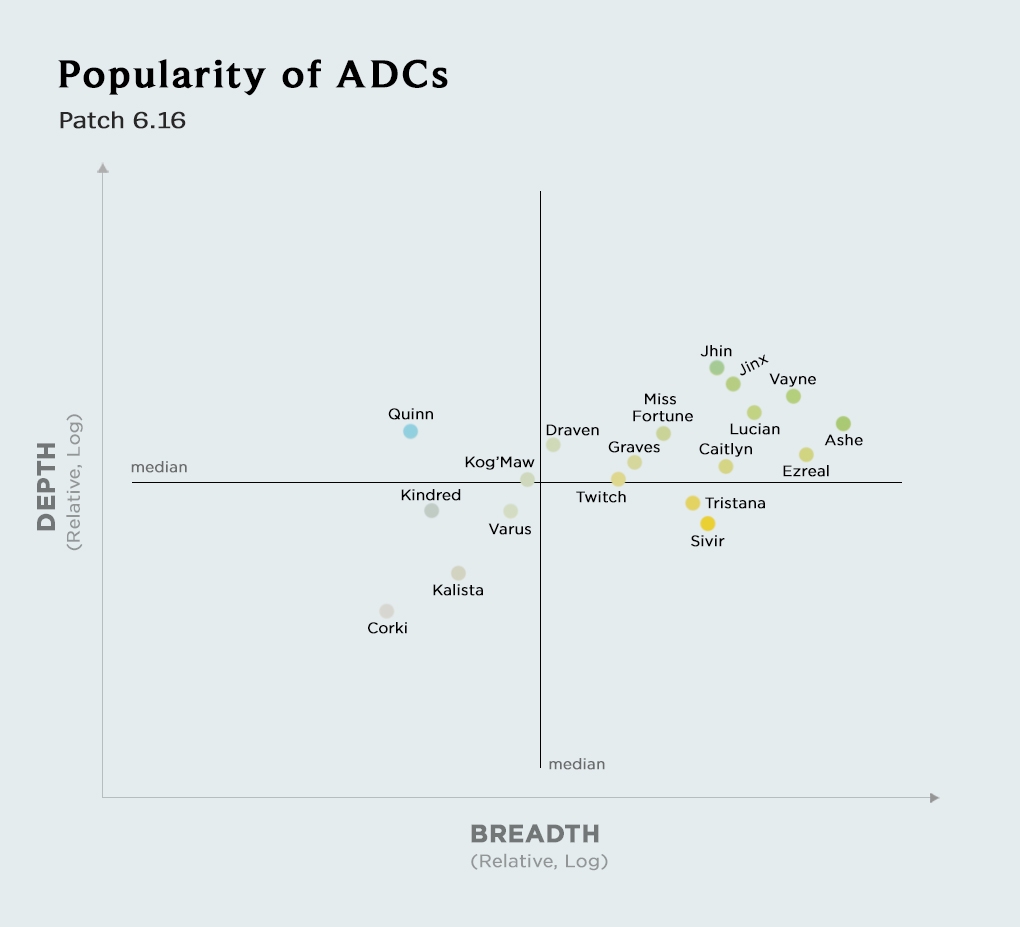 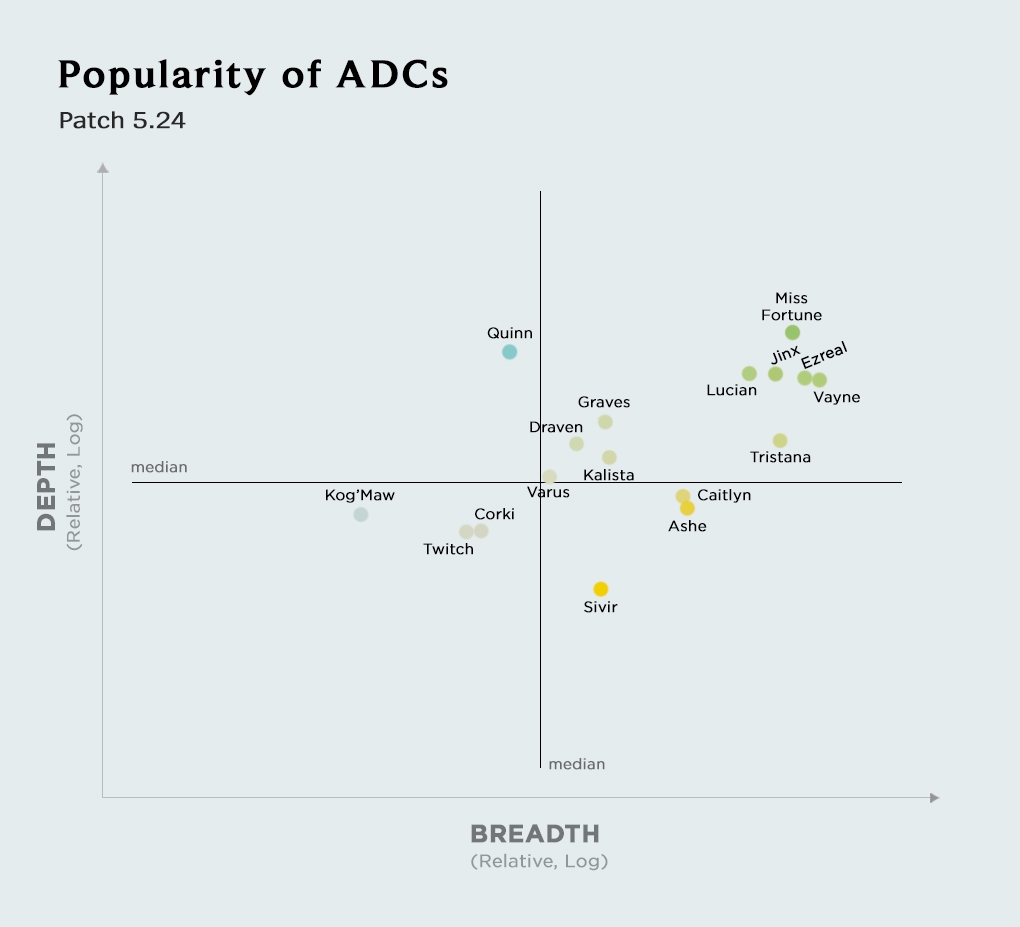 Marksmen are a unique group of champs—of the ~20 marksmen, few are found in the unpopular category. In fact, about half of all marksmen fall into the popular category at any given time. One theory about marksmen’s consistent overall popularity is due to the fact that 1/5 of the champs in any Summoner’s Rift game is going to be a marksman, assuming each team has an ADC (unless you’re a meta-defying bonobo… or genius). Since only 1/7 of League’s champions are marksmen, there’s a smaller pool to choose from, and this could result in marksmen’s popularity as a class.

Another thing that may contribute to their overall popularity is that the skills needed to be successful on one marksman apply to the whole roster: Positioning is key, and it’s all about maximizing damage output through right-click mechanics. This means if you’ve mastered one, it’s likely that skill set will help you to easily pick up another.

Perhaps we need to make more marksman to differentiate them further, but there is still one other theory that explains their popularity: Many marksmen are humanoid, and people apparently like playing people-y champions. 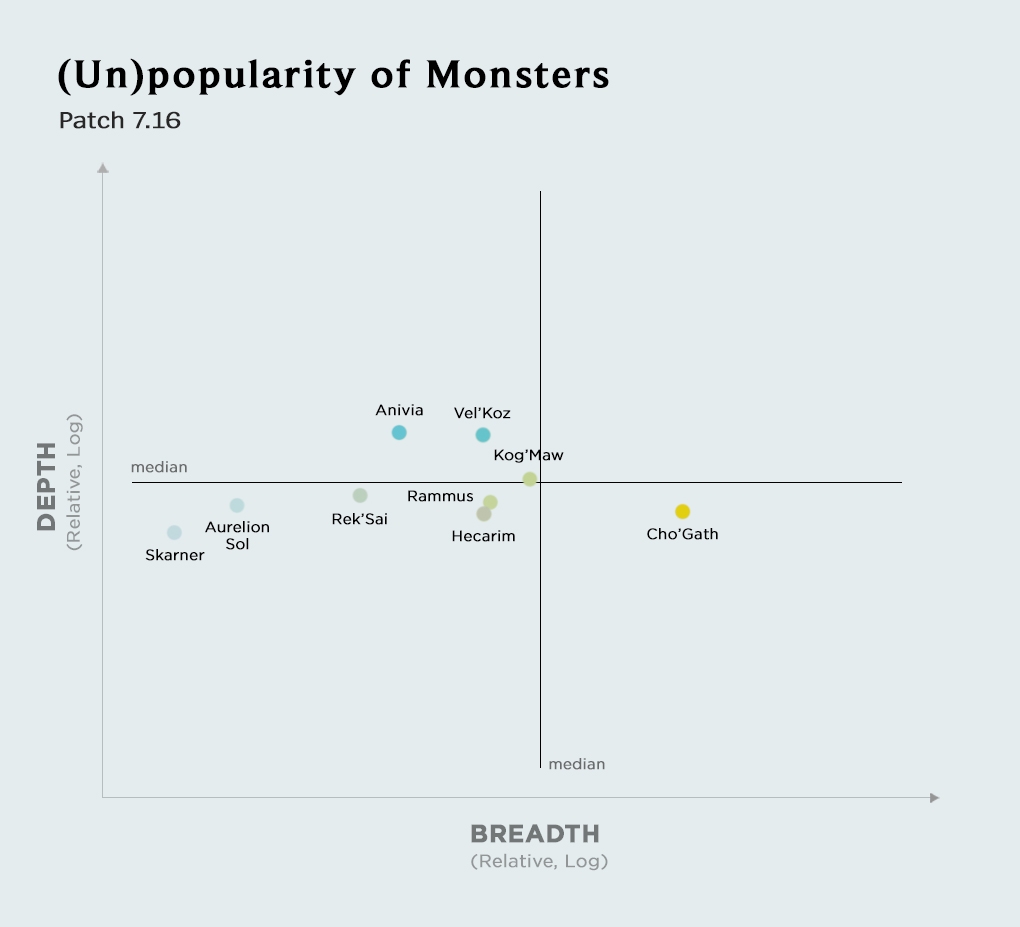 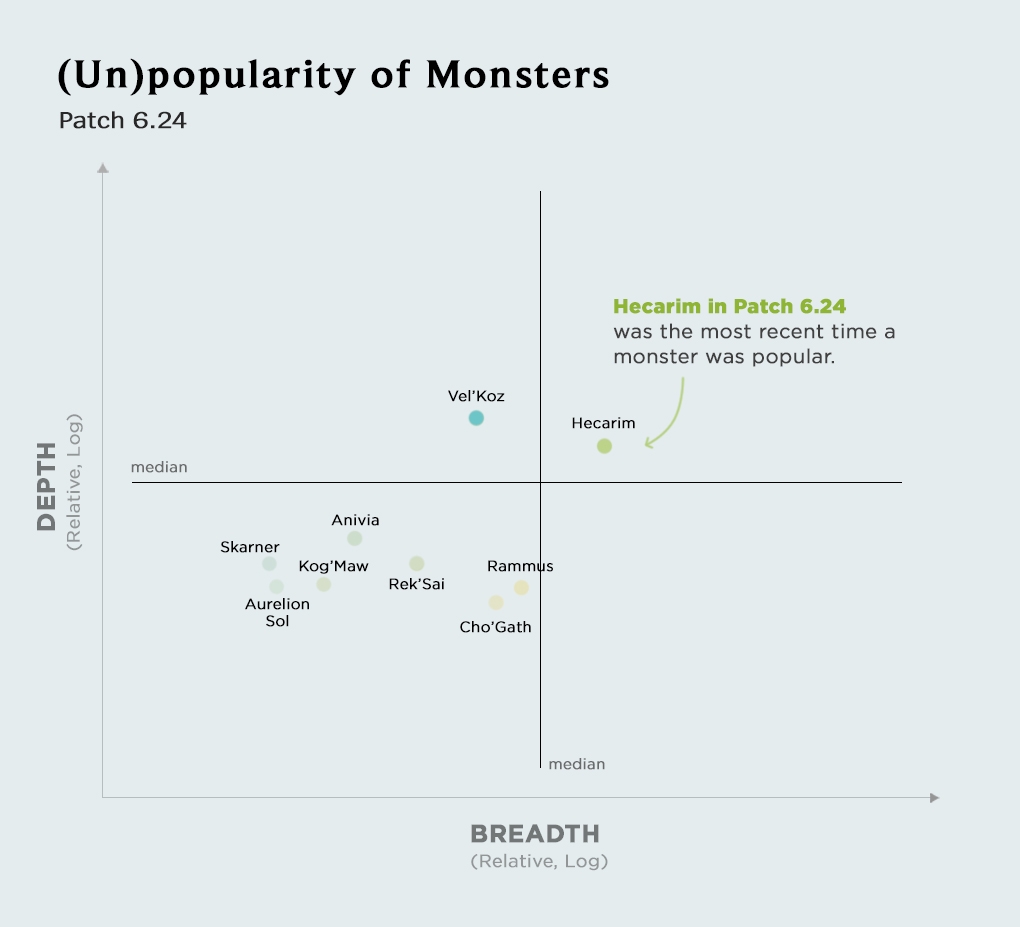 Monsters have a tough life as it is, being monsters and all, but it also seems like players don’t pick them as much as humanoids. Of the eight monsters, none are currently popular, with only one having been popular at all since we started collecting this data (excluding Aurelion Sol’s debut patch). One theory for their unpopularity is that maybe it’s just easier to identify with—or aspire to be—a badass demon hunter over a lonely crystal scorpion. But it’s also possible we, as designers, haven’t really hit on a fantasy or a kit that resonates across these creature types. 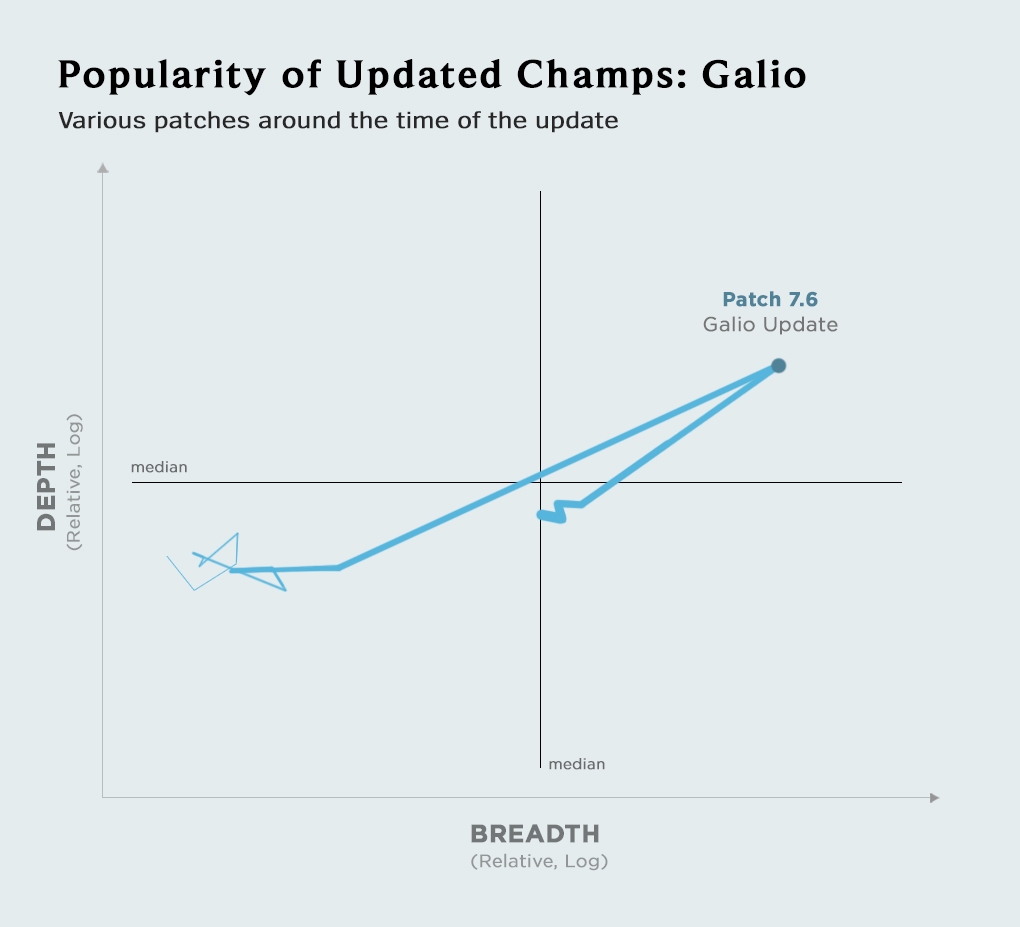 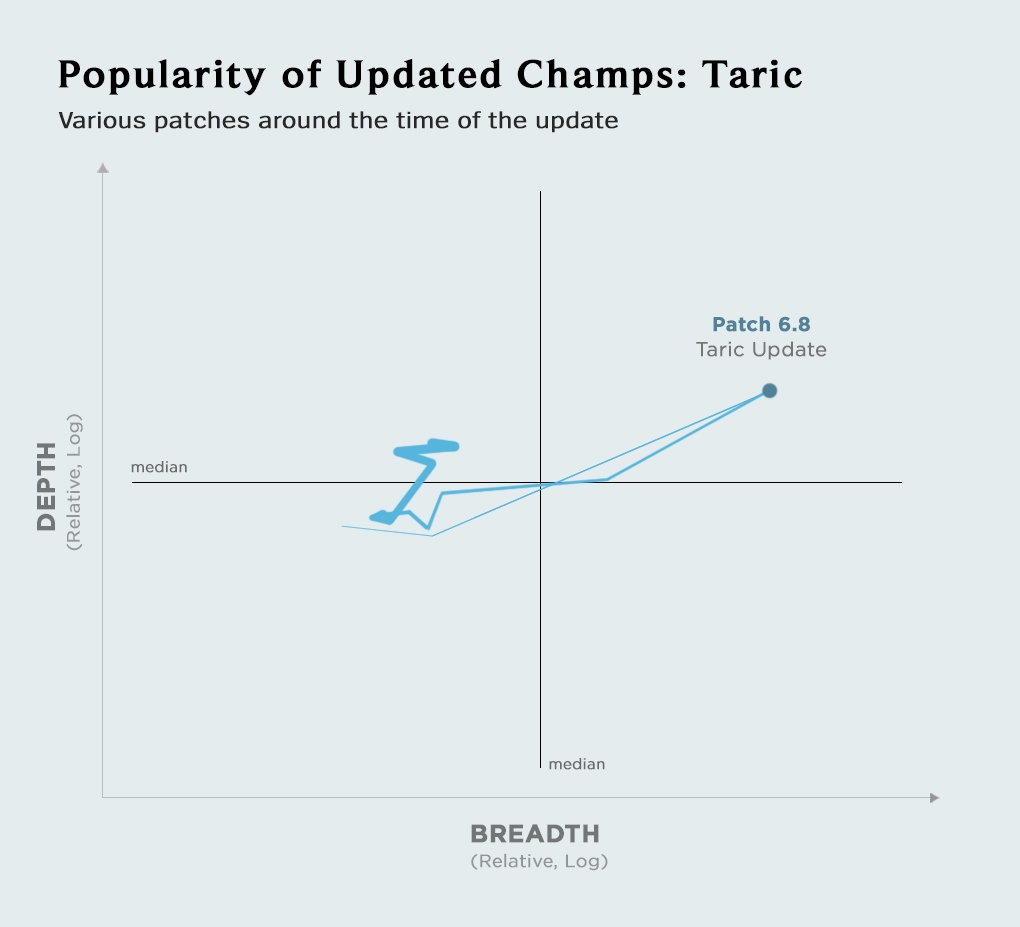 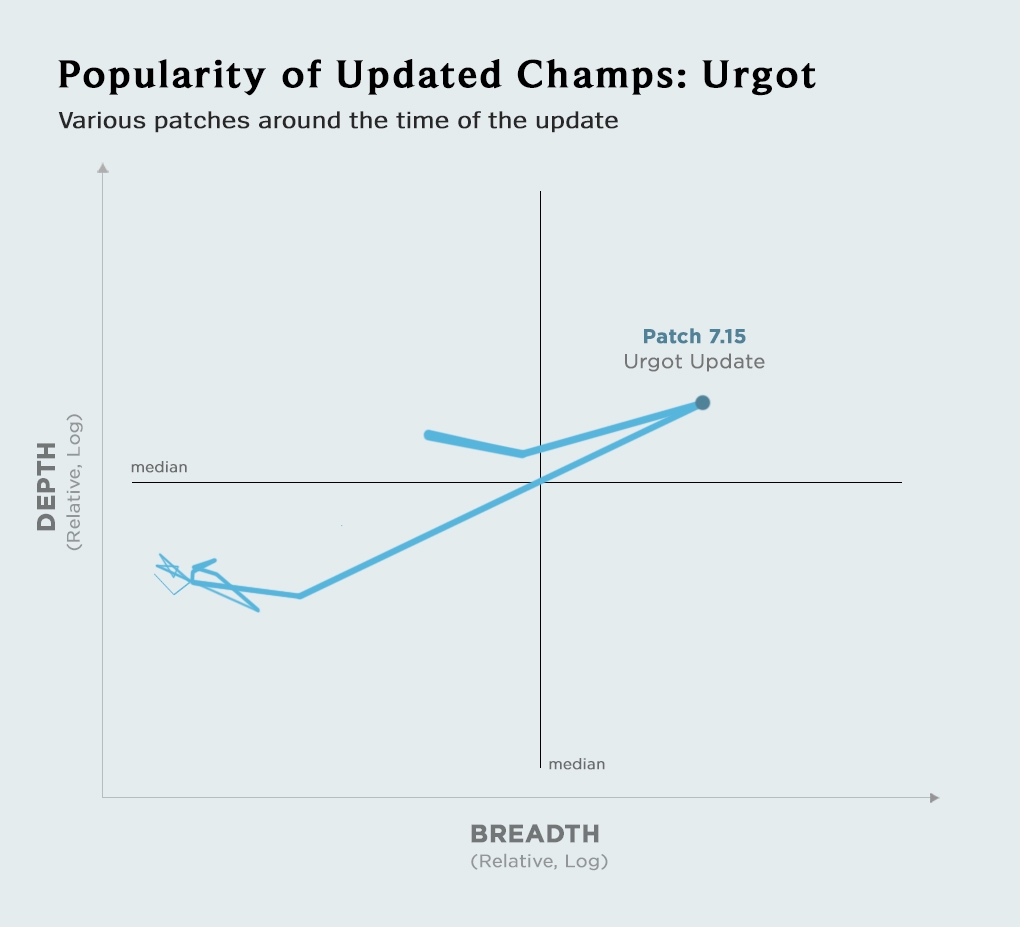 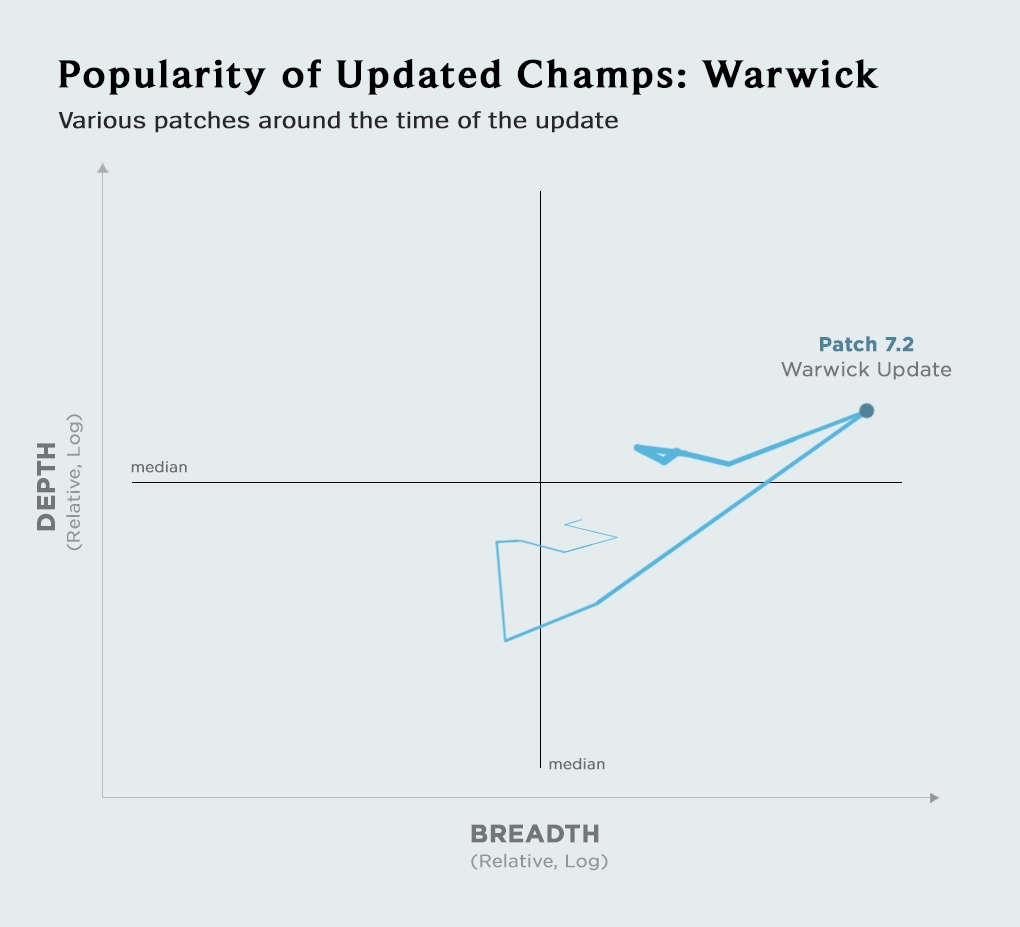 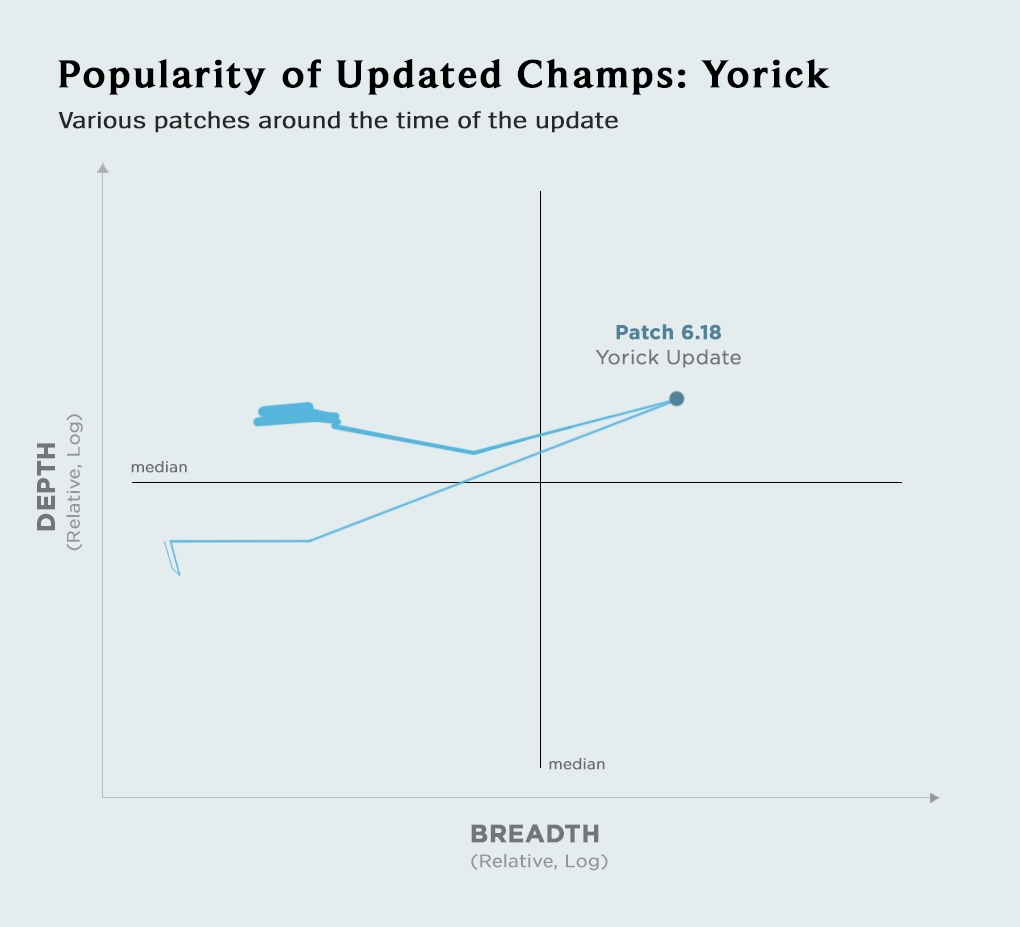 Breaking down popularity into breadth and depth also allows us to better measure the impact of champion reworks on their popularity. We don’t ever aim to arbitrarily make a champion more popular. Instead, we try to set a design target and push the champion’s visuals, thematic, and kit in that direction until it comes together.

For example, we never expected Urgot to become the most popular champion (or even a champion who falls into the “popular” quadrant), so we tried to embrace his unique qualities and make him the best, most Urgot-y Urgot he could be. In this case, one of our goals was also to move Urgot outta the unpopular category and into the niche one. It seems he’s heading that way but he’s still new, so time will tell.

How do we use this?

Our goal is to make champions players enjoy, whether that means everyone wants to play them or a select few want to main them. We’re happy with either, but the only thing we don’t want to do is make a champion who ends up being unpopular. We always want our time and effort to result in characters that players think are awesome and are excited to play.

This data isn’t the end-all be-all of how we view champions. Rather, it prompts us to ask questions to learn more about what players like: Why does Lee Sin stay popular for over a year and a half? Why do players like and play certain champs? Why are some groups less popular than others? Answering these questions isn’t easy, and we might combine this data with other work like the Champ Friendship Compatibility Device to try and find some answers. Even after all this time, we’re still learning more about players, and data like this helps us to create and update champs in a way that feels good.

That’s it for us! Let us know what other stories you plucked from the noodles in the comments below. 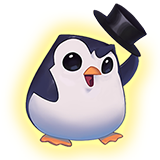 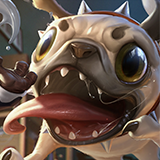 Nancymon
Insights Designer ― Nancy Lam
Nancymon works with Insights to make colorful data visualizations and annoyingly cute doodles. Outside of work, she is a sloth enthusiast stuck in the body of a cat lady.
Related Articles
Related Articles