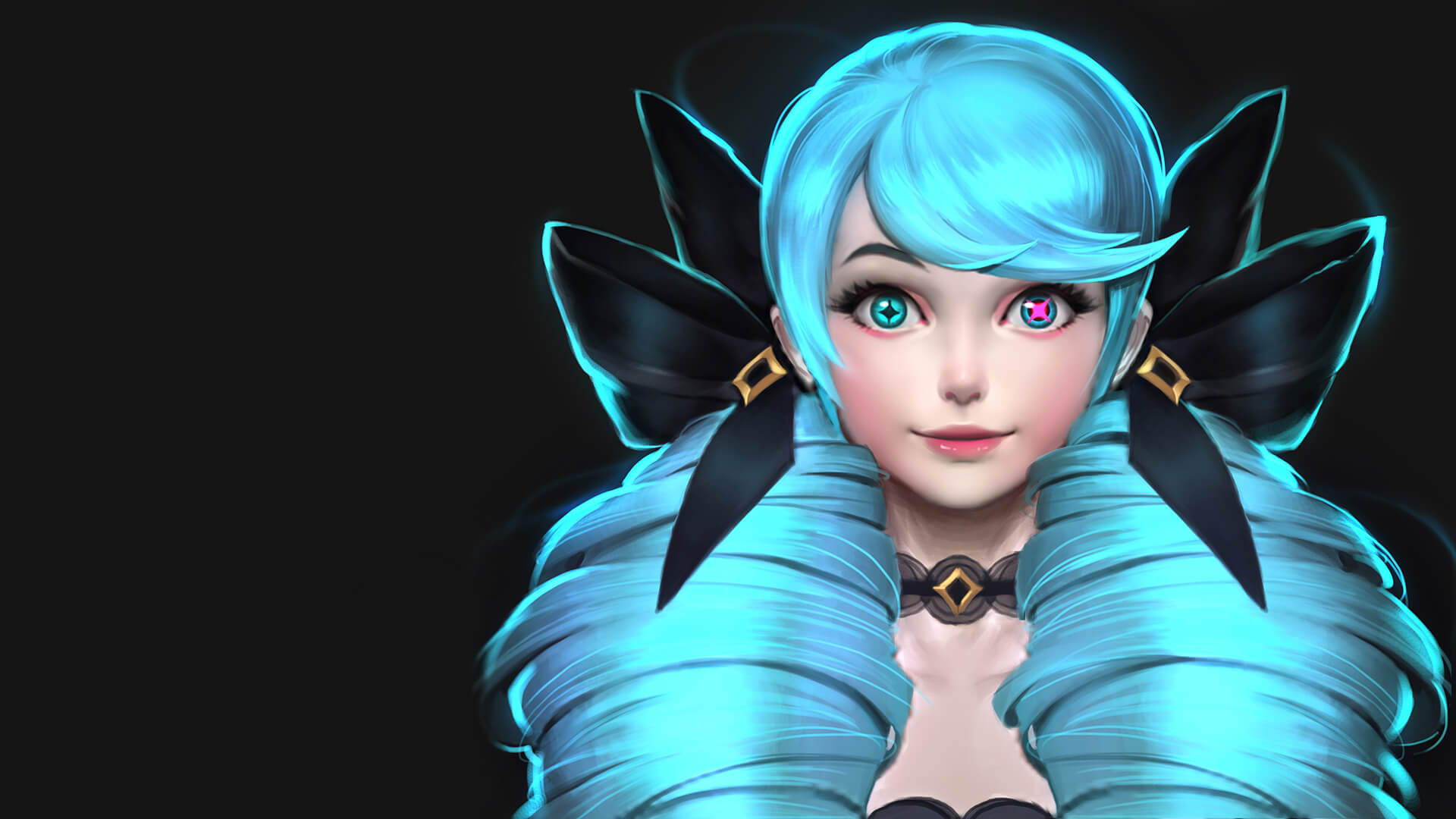 Cut from a different cloth.

Do you remember your favorite childhood toy? Was it a white teddy bear? Or a beefy action figure? Or perhaps a princess who reigned over Stuffed Animal Kingdom by day and fought crime by night?

These toys, and the memories they awaken, are universal. No matter where you’re from, no matter the circumstances of your childhood, no matter your race or identity or background... we all have that one toy. So what’s stopping a Runeterran from having one?

Who’s to say a Camavoran peasant girl never ran through a field of wheat with her selfmade princess doll in tow? They would’ve stayed in that golden field until day turned to night. Gwen, she’d have been called—a name that sounded so perfectly royal to her young maker. The doll’s dress lovingly crafted to match the intricate designs on the Camavoran warships in the harbor. Everything about her made by a girl who dreamed of one day going to the castle herself.

And maybe one day they’d get that chance. Doll and maker would travel across the sea, experience royal life, and maybe, just maybe, marry the prince. And then the three would live happily ever after.

Except that’s not how the story ended. Not this one, anyway.

A Toy From a Bygone Era

Gwen’s story started, as many champions do, with a goal: create a “peppy skirmisher.” Following Viego with a champion of similar seriousness and gloom would’ve left League feeling xX2edgy4meXx, so the team looked towards the opposite end of the edgelord scale, to joy.

“We have a few champions who fall on the ‘joyful optimism’ spectrum already, like Lux and Seraphine,” explains narrative writer Michael “SkiptoMyLuo” Luo. “So we needed to make sure we found a new approach. One of the perspectives we haven’t explored is someone who’s amazed by everything—even the little things like the feeling of grass or the smell of the ocean. Things we normally ignore because, to us, they’re so mundane.”

Gwen’s original concept artist, Paul “Zeronis” Kwon, used this idea to create a spread of characters who might understand the unbridled joy of life. But there was one particular concept that stuck out to everyone: the doll. 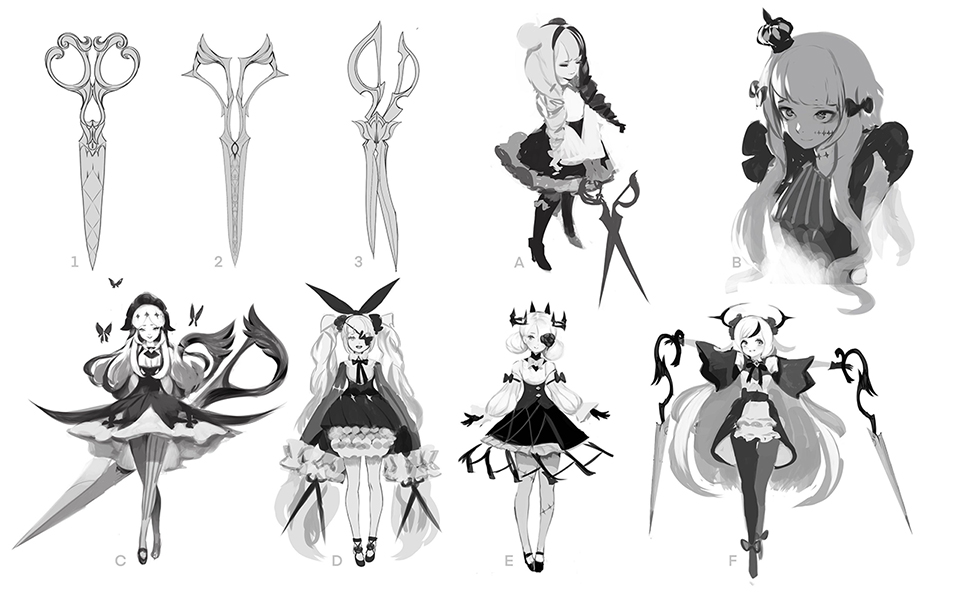 “Gwen has some memories of her life as a doll, but now she can finally interact with all the things she’s only seen before. And she’s amazed with all of it,” SkiptoMyLuo says. “The narrative team sort of envisioned her as someone during their first trip to an amusement park. They’re brimming with joy and excitement to do everything—eat cotton candy, ride the rollercoaster, play games. It’s just the feeling that everything’s really, really amazing and you just have to experience it all.”

But that still left the question of where Gwen would be from. Zeronis’ concepts showed a cherub-faced girl in a lolita-style dress, which could feel pretty foreign in Runeterra. So what would her story be? And how would the team make sure she felt anchored in League?

Luckily, it was around this time that Viego was taking form...

Isolde, Viego’s beloved wife, came from a land conquered by Camavor. The daughter of peasants, Isolde found joy in more “humble” pastimes, particularly sewing. But like most little girls her age, she still longed to travel across the sea to visit the kingdom’s lavish palaces. In an attempt to play out this life, she created her own princess doll, Gwen, whom Isolde imagined was the picture of regal elegance. 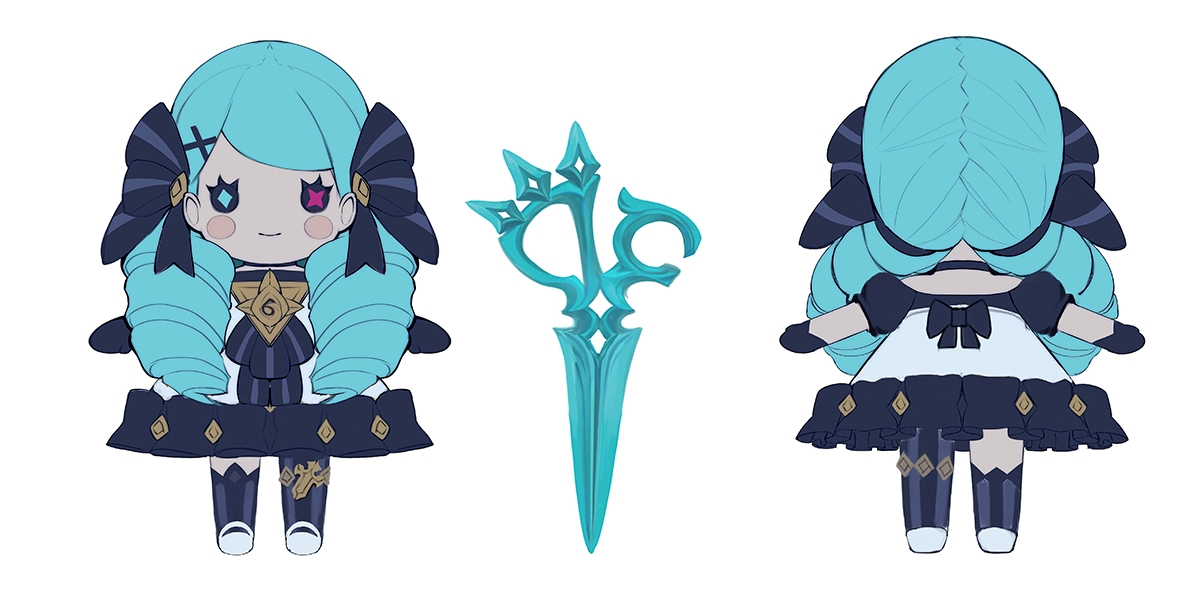 “Camavor’s culture is a hybrid of conquistador-era Spain and Victorian England. The style of that time is very baroque with emphasis on embellishments and attention to detail. We wanted to make sure that that style came through in Gwen, both as a doll and human,” shares concept art lead Gem “Lonewingy” Lim. “To help make her feel less modern and more high-fantasy Runeterra, we borrowed from shape language found in Camavor. The swirls on her broach and three-point embellishments can be found in the clothing Viego wears. But it’s different enough to still feel like a little girl tried her best to copy the style she saw on the royal family.”

Every champion should have a clear silhouette that highlights their source of power. Senna has her BFG, Darius has his axe, and Sona has her super rad keyboard etwahl. So when Zeronis drew Gwen’s early concept, he gave her absolutely massive scissors. And they just sort of cut struck a chord.

“Gwen’s interesting because she’s from a millenia ago, but I still needed to make sure she kept some unity with the Shadow Isles, which is where she’s from for League classification purposes,” Lonewingy explains. “So I focused on ways to add wickedness to her scissors and I just realized that... Scissor engineering is really complicated! I had no idea how genius scissors were! I spent so much time researching their design to make sure they’d open and close correctly—especially for something that’d be found in that time period.”

Lonewingy landed on a design that highlighted the intricate Camavoran craftsmanship while still feeling like they could belong to a Shadow Isles champion. But there was one more thing the team needed to complete Gwen’s scissors: their sound.

“I actually used a few different dollar store scissors to make Gwen’s scissor sound effects,” laughs Riot Zabu. “I have a very... unconventional way of working that involves a lot of DIY and just f*&^ing shit up. The upside is that it means I’m really familiar with audio repair tools, which was helpful when working on Gwen because I was able to use those tools incorrectly to create some really unique sounds to make her sound effects sound exciting and rewarding.”

So now we’ve got Gwen, the peppy, scissor-wielding doll-turned-human. But there was still something missing... like the whole skirmisher gameplay part. Only kind of important. 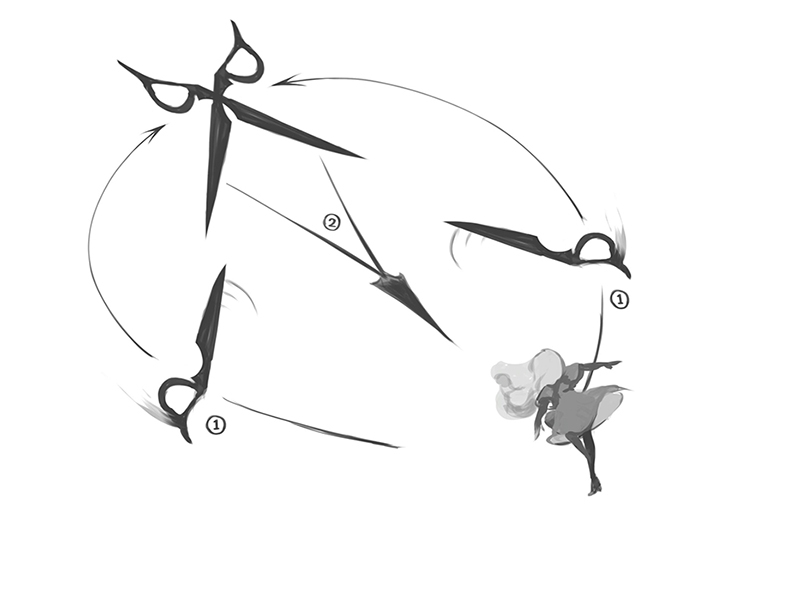 Skirmishers are League’s “1v1 me bro” mentality incarnate. They want to scrap with high-value targets and then get out to keep doing whatever it was they were doing (like stealing their jungler’s raptors). What they don’t want is to jump their target and then get dogpiled by the rest of the team. So it helps if they can isolate their prey or pick fights on their own terms.

One of the ways we can give skirmishers an edge in their endless fight for the perfect 1v9 is by giving them a zone of power where they excel. And when the team started working on Gwen, they already had one in mind.

“I’d actually been working on Gwen’s zone control spell before the rest of the team started—before peppy skirmisher was even an idea, actually,” recalls champion designer Dan “Riot Maxw3ll” Emmons. “When Gwen started to take form, we wanted to keep this particular spell because it fit with her personality. It’s like she’s saying, ‘I have all the fun tools and you don’t,’ then she gets to force her enemy to play her game with her on her terms.”

The problem was that her enemies could just leave her zone. No one wants to fight the enemy when they’re at their strongest, so the answer to Gwen’s “welcome to my thunderdome” spell was to just leave. And that’s when the team realized that they needed to give Gwen the tools toactually force enemies to play her game.

“When I took over Gwen’s game design, I tried all of these really wild ults that were centered around her being able to keep people in her zone,” explains game designer Stash “Riot Stashu” Chelluck. “Her ult was always needle-and-thread themed, so we used that to yank her enemies back into her zone. It was really fun to play as, because your victim’s teammates couldn’t do anything to help. There was another iteration where she’d spear two enemies with needles and then swap their locations.”

Every champ in League has a power budget that includes everything from CC to team utility to raw damage output. So if Gwen had a high-CC ultimate, then she’d need to do less damage in return. That’s not really what 1v9 skirmisher players are looking for, so we needed a better solution for keeping enemies in Gwen’s playpen.

The answer? Gwen now has the ability to move her zone of control once, letting her chase down any enemy attempting to leave. In other words… This playpen has wheels.

Weaving in the Ends

Gwen might feel strange at first. After all, she’s stuck between Camavor—a long dead empire—and Runeterra, a strange world she’s excited to explore. But she should still have an air of familiarity to her, of timeless comfort.

Perhaps she’ll conjure up memories of a favorite toy, of playing until the streetlights came on, or childhood dreams of the person you’d someday become. And if not, at least you’ll have a joyful new champ to run it down with. 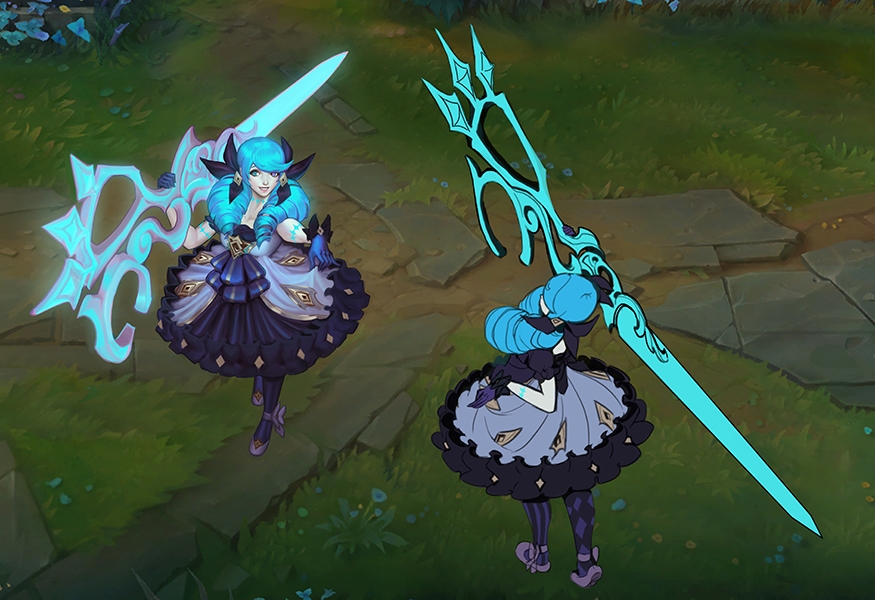