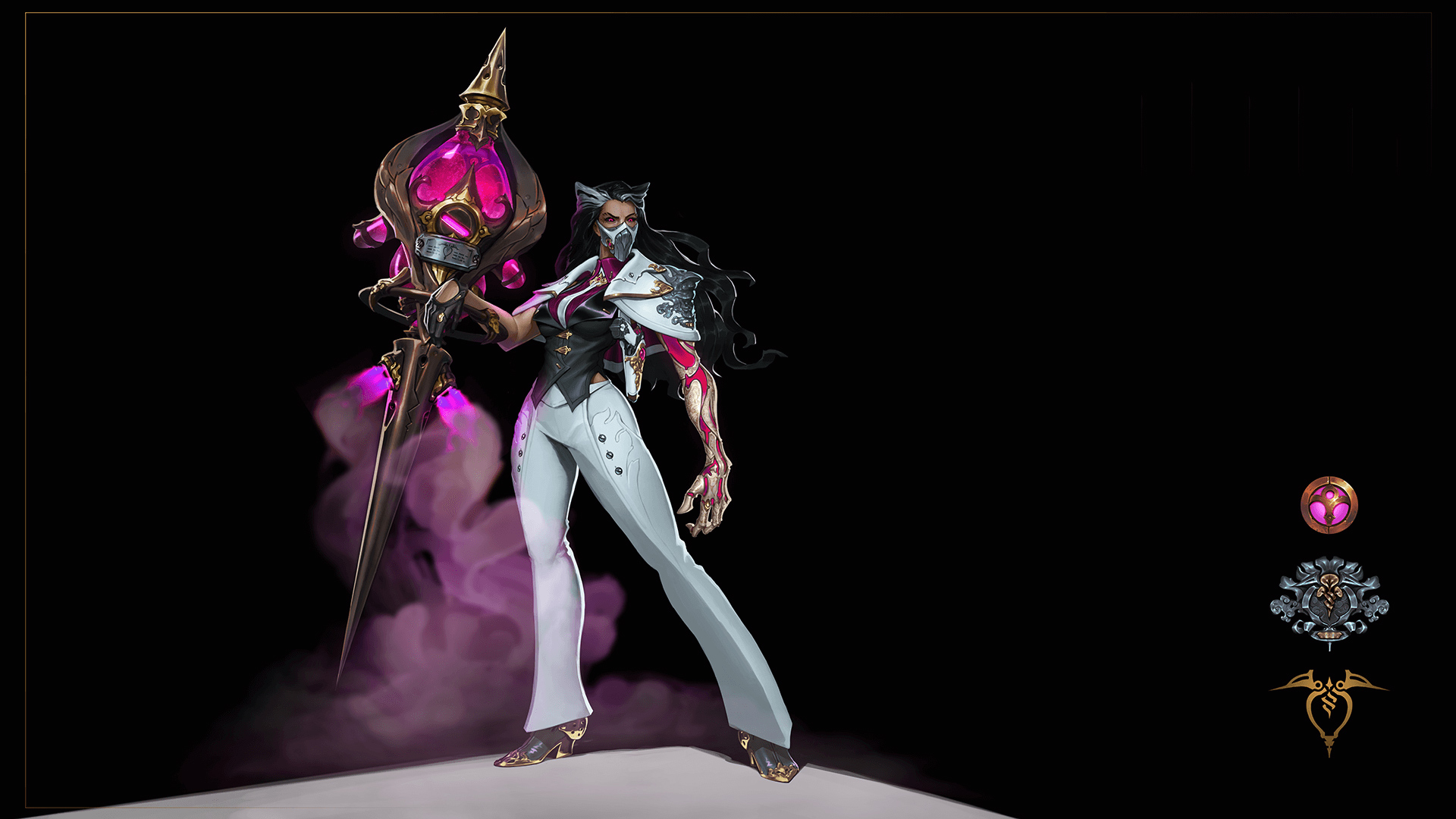 If Renata Glasc was in our world, she’d be investing in crypto while actively manipulating its economy via Twitter. But, thankfully, she’s not in our world—we already have enough of those types.

Instead we have Renata Glasc, the Chem-Baroness. A capitalist who saves the poor of Zaun with one hand while choking the life from them with the other. An evil enchanter who uses powerful chemtech to bend her enemies to her will and “empower” her allies (read: bend them to her will).

And honestly, what more could a girl from the Sump of Zaun ask for?

Support for a Price

The current enchanter roster consists of shy egirls, a handsome himbo, a fairy-flinging lunatic, and a cat. But what about us edgy Pyke-appreciators who want to play an enchanter while being baddies?

“We discussed making a dark enchanter pretty early in the process,” recalls game designer Blake “Squad5” Smith. “So I started by focusing on the outputs of an enchanter: protecting your teammates and enabling them to succeed. Then I thought about how I could give a more sinister twist to those mechanics.”

On the surface, it seems like there’s only so much you can do to make an enchanter evil. Healing, shielding, and buffing are inherently selfless—you’re granting a piece of your power to your ally and in return asking for nothing (unlike mage supports who ask for your kills so they can buy Deathcap). But if you dig deeper, there are plenty of ways to make enchanter mechanics more malicious. 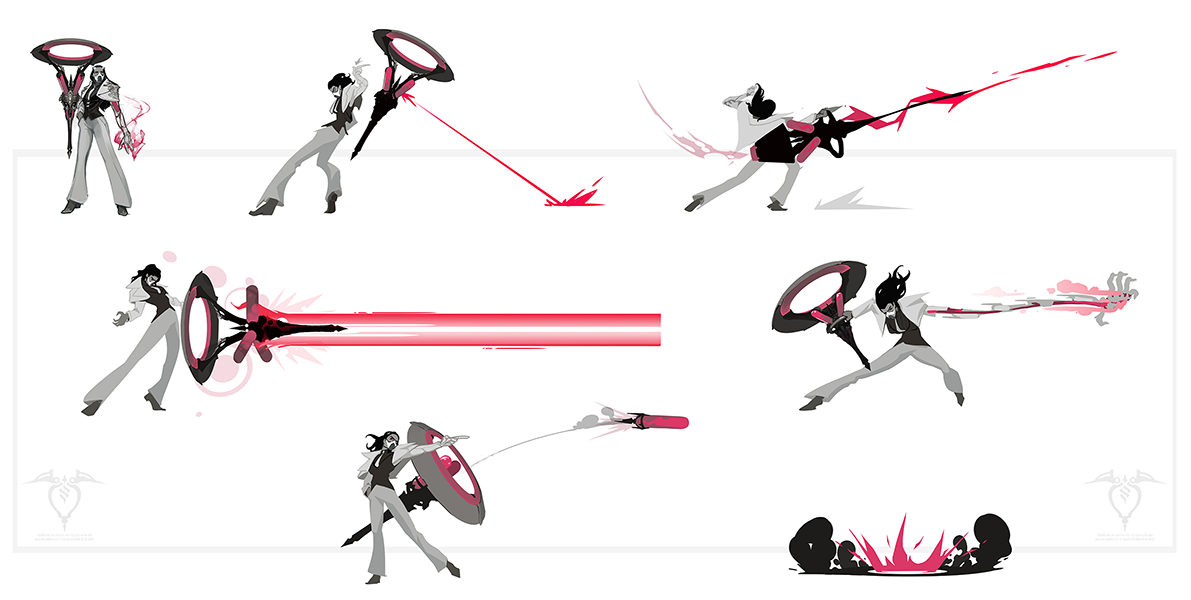 Power for a price, manipulating your enemies, forcing allies to fight beyond death. These are the avenues Squad5 found for making an evil enchanter.

“I narrowed in on the gameplay mechanics before Renata was even Renata,” Squad5 explains. “It’s pretty unusual for champion development, but because we had a strong gameplay thematic goal from the beginning, it was just clear what kind of kit we needed. Her R literally turns her enemies against each other. It’s kind of a remix of taunt, in that it taunts you to attack your allies if you’re Renata’s enemy. And she buffs you with increased attack speed, which makes you more deadly when you’re killing your friends. It’s this cool moment where she can turn your power against you. It ended up becoming my favorite spell in her kit because it’s a new approach to enchanters that we don’t currently have in League.”

Every enchanter needs a weapon, and when looking at the ones enchanters mainly use, senior concept artist Sundo "Kringlejim" Pambito realized there wasn’t much diversity. There are a lot of staves—wind, water, magic. But there were two things that tie them together: they’re big and they do many different things.

“I probably drew hundreds of designs for Renata’s weapon. I needed it to be clear that it enrages people, makes them immune to death, damages enemies, shields allies, makes enemies turn on each other... It does a lot,” Krimblejack explains. “And because she’s an enchanter I wanted some sort of twisted medical approach, so I tried a syringe, a weird chemical tank, even a machine gun. But in the end invoking the feeling of the caduceus staff felt the best.”

From there the team just needed to do the easy task of designing a whole-ass champion who embodied the malevolent kit Squad5 designed—what kind of evil do these abilities embody?

Evil in League takes many forms. From a comically tiny master of evil, to world-ending rage inspired by grief and loss, even an entire compendium of demons who’ll do everything from eat you to torture you. Yet we’ve never really had an evil that was relatable. Sure, we all remember the pain from our first breakup and the belief we’d never get over that world-shattering pain, but very few of us spawned Ruination from the Black Mist-creating hole in our chest where our heart once lived.

What if we created something a little closer to our world? Something a bit more modern.

Born among the Zaunite poor.

Who doesn’t love capitalism? Picking yourself up by your bootstraps, climbing the socioeconomic ladder, and building a corporate empire. All you need to do to get there is step on the people who helped you, destroy the environment, and commit tax evasion. Isn’t it amazing!

While we’re all very familiar with corporate evil, it’s something we’ve never explored in League. But there’s one problem: It’s so real—a modern creation from our world. How do we create a champion who embodies corporate evil while existing in a world full of dragons, demons, and magic?

We already knew the core of the kit, we knew they'd be evil (or morally gray), and now we knew we wanted them to be a rich entrepreneur. So where are they from in Runeterra and what's their story? 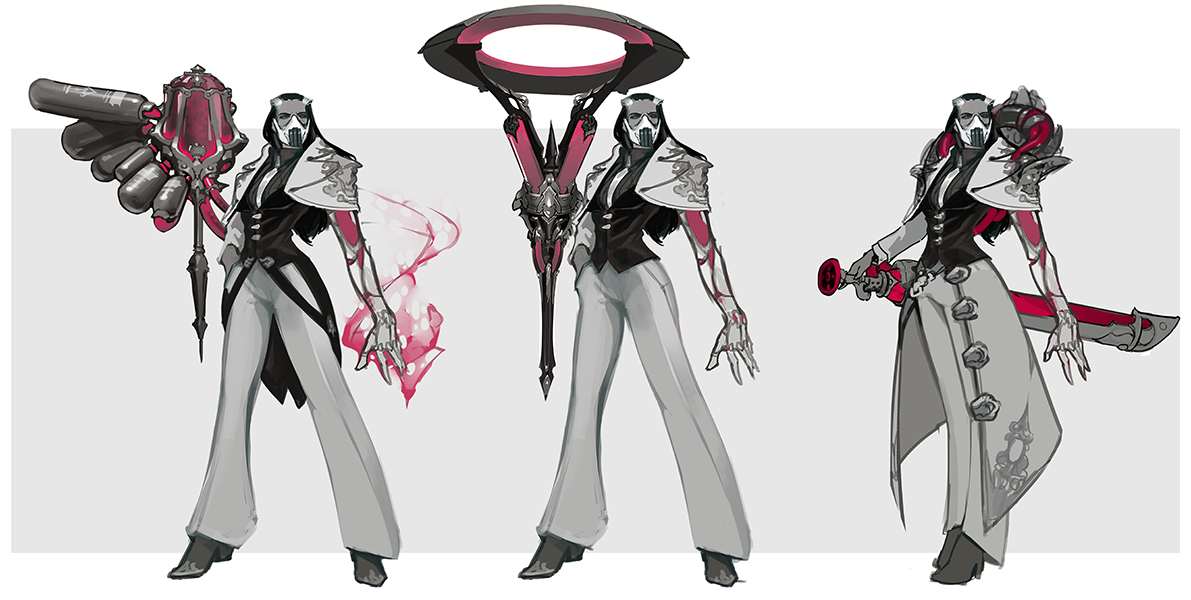 Zaun and Piltover are unique in Runeterra. They’re cities of progress, technology, and rampant inequality. We’ve got a lot of characters who give us a look into both cities and the subcultures that exist there, but none who show us the people who profit from it all. Well... actually that’s not entirely true.

When thinking about the type of character who’d fit the gameplay, personality, and archetype the team was creating, Silco’s name came up. But as champions team lead Ryan “Reav3” Mireles already explained, Silco isn’t coming to League.

“We explored Silco really early in the ideation process, but we just didn’t feel like he hit the bar of a League champion,” Reav3 explains. “Most of the characters in Arcane kind of fail to hit that bar actually, even Jinx, Caitlyn, and Vi. They wear muted clothes and have slightly more subdued personalities. It works really well for Arcane because the show’s more grounded and the characters are supposed to be relatable, but that’s not what we’re looking for in League. Champions need to be clearly readable, unique, and have clear sources of power. We tried to beef up Silco to hit those goals, but he stopped feeling like Silco. And we didn’t think that was fair to the character we fell in love with in Arcane, so we ultimately went another direction.”

Zaun is ruled by chem-barons—crime bosses who profit off of the most vulnerable citizens in the city. They’re ruthless. Cunning. Hungry for power. It simply was perfect.

“When thinking about who Renata would be, we knew we had someone very manipulative,” explains narrative writer Dana Luery “griddlebones” Shaw. “Someone who’s able to get people to do her bidding, doesn’t have to dirty her hands, and could turn her enemies into her allies. It reminded me a lot of crime bosses, and we spent a lot of time looking at organized crime lords.”

“I asked myself, ‘What kind of crime boss from the 20s or 30s would have these sorts of abilities?’ Because similar to Renata, a lot of these people wanted to be viewed as legitimate businesspeople, enough so that they had people killed left and right,” griddlebones continues. “So what would happen if we had a legitimate businesswoman who also had people killed left and right? That’s kind of where, personality-wise, Renata came from.”

Renata’s fortune comes off the back of her parents, Zaunite alchemists who were humanitarians to a fault. They provided medical care to the poorest of the poor, and instead of accepting compensation, they went without. Renata would go to bed cold, hungry, and bitter. So it shouldn’t come as a shock that when she grew up, instead of following in her parents’ footsteps and providing free medical aid for Zaun, she decided to build a corporate empire.

Unlike the CEOs and executives of our world, however, Renata Glasc knows she’s not the good guy. Sure, she might donate breathers to the citizens of Zaun after chemical disasters, but that’s the cost of doing business.

Everything about Renata should feel high class, like the Piltovan elite she secretly emulates (though don’t expect her to admit to that). From her white suit which stands out in the filth of Zaun, to her one-of-a-kind, beautifully lavish, triple barrel, magazine pistol. Everything about Renata Glasc is bespoke, elegant, and expensive. Including the things she’ll use to kill you.

Prosthetic limbs aren’t a novel concept in Zaun. Many of the city’s citizens work under terrible conditions and are victims of horrific accidents, sustaining traumatic injuries or worse. But Renata approaches things with more... pragmatism.

Within Renata’s prosthetic arm is a series of snaking pipes and syringes that contain her chemtech “medication.” She can control her enhancement at will, snapping it out to grab for things, manipulating the fingers to create custom keys, or, if there’s need, delivering a deadly chemical cocktail to any who would dare cross her. But if you’re brave enough to place your life in Renata Glasc’s hand, perhaps you’ll get close enough to see something beautiful and familiar.

“I try to ground characters in the world so every element of their design comes from things you’ve seen before. For Renata’s arm I looked at Orianna’s design,” explains Kinglejingle. “Renata’s prosthetic probably wasn’t made by the same person, but it most certainly was made by a craftsman who’s more focused on the artistry and beauty of design instead of the more serviceable or industrial styles you see in a lot of other Zaun champions. Even the color scheme should feel complementary to champions like Jinx and Mundo.”

But beyond the surface of beauty and class, Renata Glasc was always intended to be a terrifying and all-powerful figure in Zaun. And someone who wears a suit made of the finest elnuk wool doesn’t necessarily give off the “f*&^ with me and you’re dead” vibes Renata needed to exude.

“I looked at some other masks in League—like Urgot’s and Viktor’s—and thought about whether there might be styles and techniques that are shared between craftsmen in Zaun,” KrimbleMas shares. “I didn’t want it to feel out of place, but it should feel higher quality. Renata didn’t pick it out of a catalog or something, but perhaps an expert engineer she hired to design it may have shared notes with Viktor. Or perhaps they’d been in a class with someone who dropped out, went to prison, and then designed a mask for Urgot.”

As for why Renata’s wearing a mask... It’s the intimidation factor. She doesn’t need it to live (except when she’s visiting Piltover and breathing that disgustingly clean air), but it does microdose her with chemtech. The cartridges towards the bottom act as asthmatic inhalers and constantly keep her supplied with the finest medicine in Piltover and Zaun. (We get it, she vapes.)

And there she is, Renata Glasc, capitalist dommy mommy with ambitions to control the Sun Gate and with it, Piltover, Zaun, and all trade in Runeterra. But is that really enough for her?

“Nothing will ever be enough. Once Renata achieves her goal, she’ll always find something bigger to dream about. Maybe she’ll launch a car into space or something,” griddlebones laughs. “For me, at least, in the same way that capitalism is about constant expansion and never being happy with the profits you have now—needing to make more and more and more, hand over fist—that’s what Renata is. She’s an endless, gaping maw of ambition and greed. I could see her saying, ‘All right. I guess it’s time to hire some mercenaries and take over Noxus, maybe. Who knows? It’s a Thursday.’”