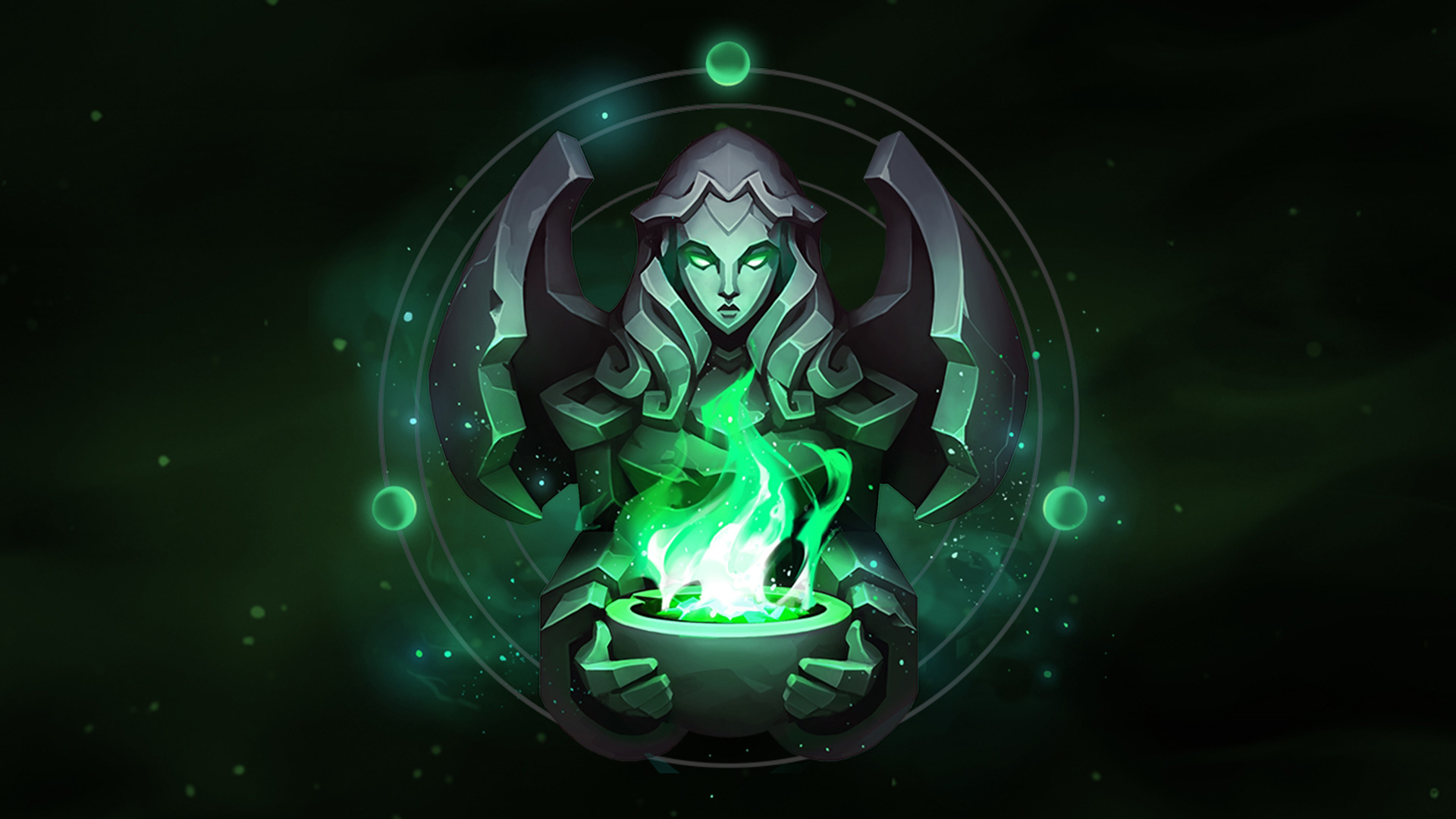 The design philosophy and goals of Leagues' latest feature, Eternals.

Hey everyone! Eternals, our new champion-based achievement feature that lets you showcase personal accomplishments for your favorite champs, is heading to PBE for release on 9.17. You can read all about how to unlock and equip Eternals in the FAQ. In this post, we’ll be talking more in-depth about Eternals, including details on our goals, how we designed these new achievements, and what the future holds.

Why’d You Want to Make Eternals?

Every couple months, we send surveys to players all over the world asking what types of new personalization features they’d like to see in League. One of the top requests is always for champion-based achievements. We decided to explore what we could do in the space, knowing that we’d have to push through some challenges. Not only is it tricky to add meaningful achievements for 140+ champs, but we also wanted to push the envelope on what this kind of game system could deliver for League.

After a lot of exploration, we landed on a few core goals that we wanted to hit:

With these in mind, we invited players to Riot to help lock down some of the details. For example, we worked with players to find the right balance between broadly-appealing accomplishments, like kills and takedowns, and unique, champion-specific moments, like Sylas’s “Stop Hitting Yourself,” an Eternal which tracks how many times Sylas kills an enemy with their own ultimate.

We do a game design review for every Eternal we create to ensure that, on paper, it’s not incentivizing a suboptimal playstyle. Then we follow this up with playtests to validate “in the moment” feels. This process has been hugely helpful in refining our designs to hit the goal of Eternals—they should reward positive play patterns that are exciting and meaningful to achieve. Balancing positive intent with satisfying Eternal design has been a challenge, so be sure to give us feedback once you’ve played with them if you feel we’ve swung too hard in either direction.

Additionally, we’ve taken several steps to minimize objective-setting with Eternals in game. You can always check how close you are to the next Eternals milestone with the hover tooltip in game, but a tracker isn’t always front-and-center. (At one point, we actually tried removing all ways to track your milestone progress in-game, but that felt pretty bad, so we compromised with the tooltips.)

Much like the Missions and Mastery systems in the past, we expect we’ll refine Eternals over time and tune them based on your feedback. We’ll keep an eye on how things are going after launch, and if you see players acting in bad faith to min-max their Eternals, feel free to report them in game and let us know.

Why are Eternals Only Available for RP?

We took a look at how other games have tackled similar systems to see what felt good and what could use some improvement. Existing systems like Counter-Strike: Global Offensive’s loot boxes for StatTrak weapons and Dota 2’s subscription model for Hero Relics showed us that rarity was a core component for these types of systems. As a result of what we were seeing, we initially designed an early version of Eternals with a loot-based system, but it felt overly complicated and too punishing to be a satisfying approach for League. As a result, we went back to the basics: We’d package sets of three Eternals for players to get with RP.

Additionally—and for complete transparency—Eternals were a huge undertaking to build. The system has a significant amount of new tech powering it to ensure that it works consistently and reliably. We also want to support and expand upon this feature for years to come, and with so many champions to build and maintain Eternals for, the only way we could justify supporting the feature was to attach an RP price to it.

What’s Up With All the Statues?

We wanted to create different visual representations of the types of achievements you’ll be showing off on the Rift. To do that, we explored the idea of appeasing ancient Runeterran gods that responded to your accomplishments, which allowed us to create multiple types of Eternals, with each representing different gameplay pillars.

Here’s a breakdown of each Eternal and the accomplishments they represent: 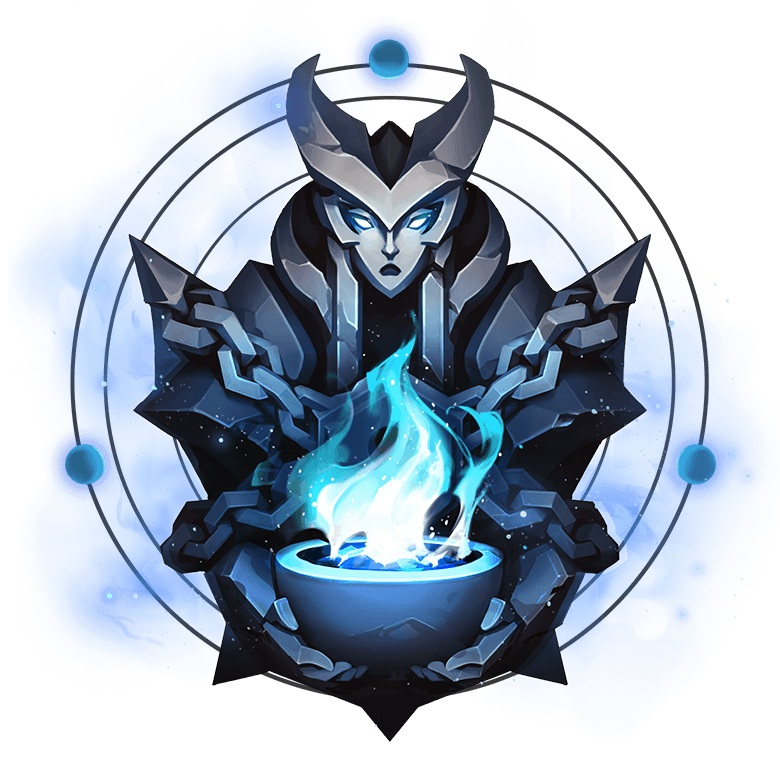 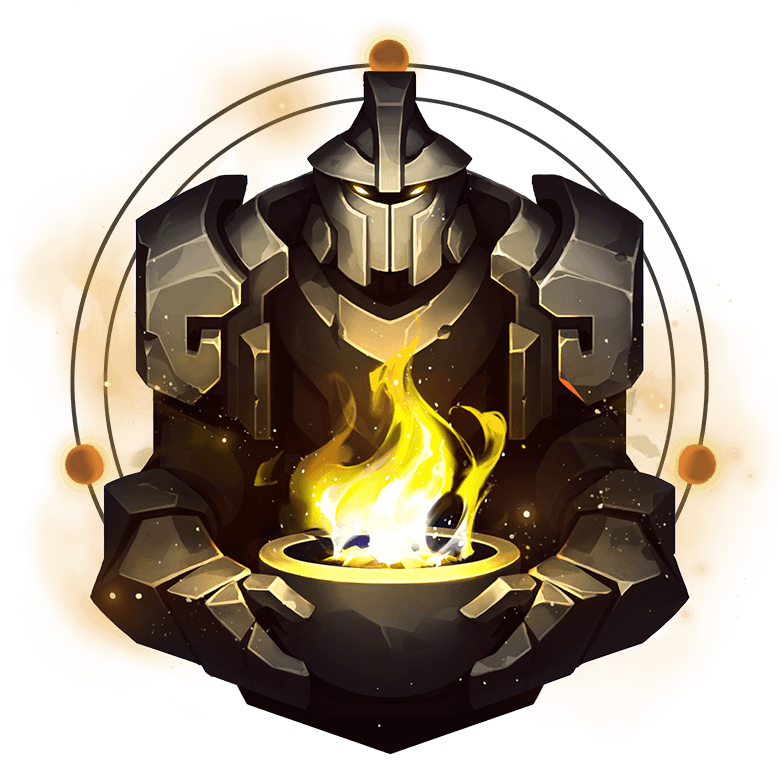 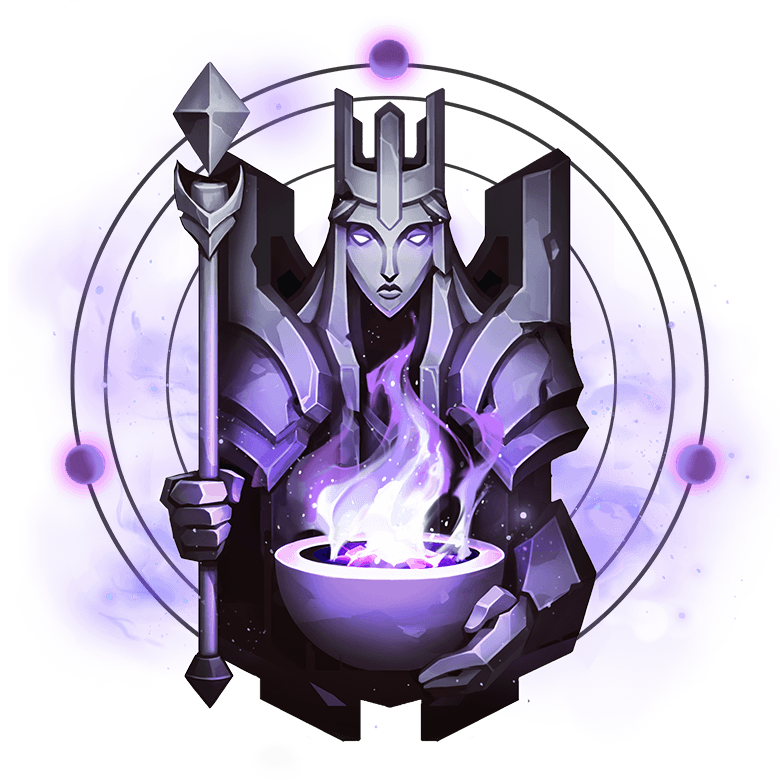 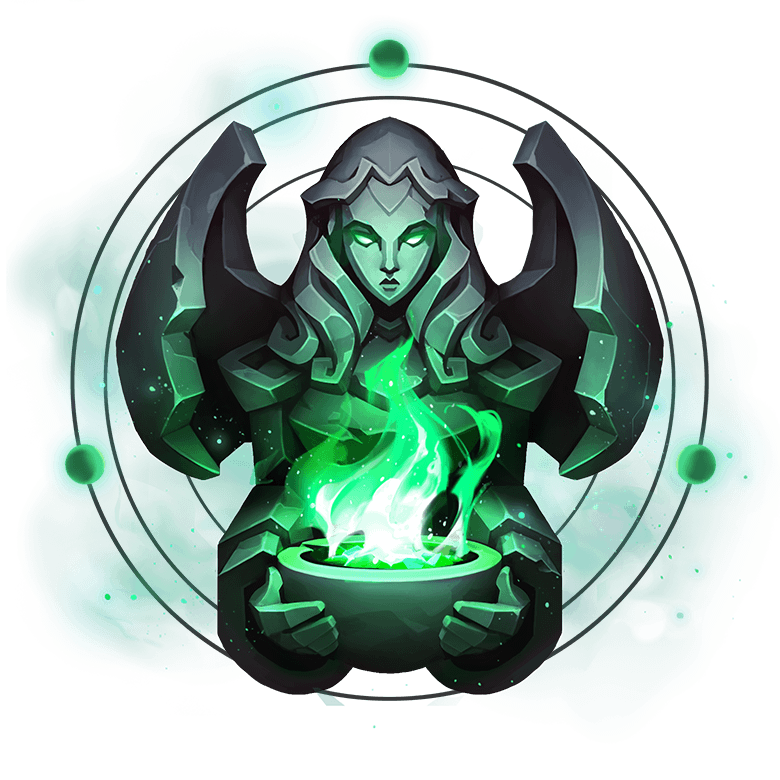 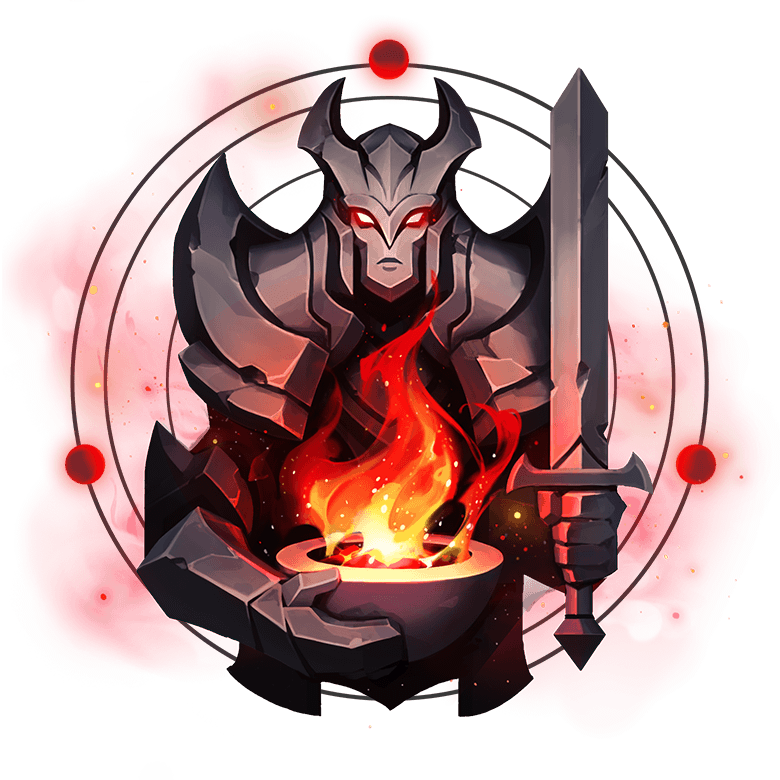 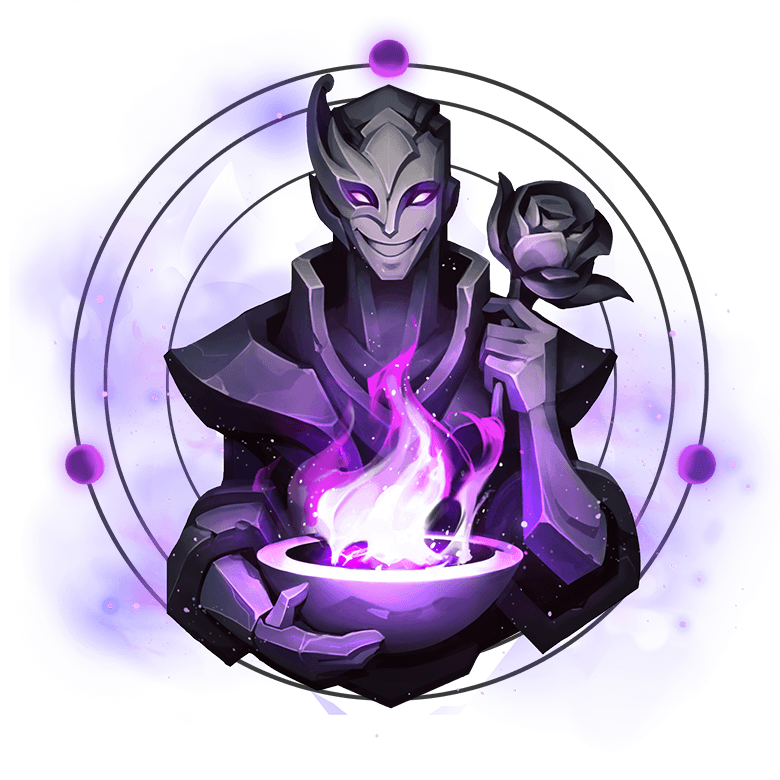 It’s important to note that these aren’t hard and fast rules. There were several Eternals that we heavily debated when assigning their alignments, like Shen’s Eternal, “Party Crasher.”

“Party Crasher” is a Protector Eternal that increments when you ult to an ally then taunt an enemy within a few seconds of arriving. You could make the argument that this is actually a Trickster Eternal, since in some cases a low health ADC is used as bait to turn a fight. However, we decided that in most instances, Shen’s intent for this particular moment is protecting his target and mitigating damage. There are a number of different Eternals that went through similar processes, and we weighed as many factors as possible in our decision for alignments.

Additionally, our launch set of Eternals has a healthy mix of different achievements to track, some of which are fairly skill-based and others less so. Our Player Labs indicated a wide-range of desires from this system, so we wanted to experiment a bit and see what resonates for our initial set. We’ve already got a list of potential Eternals for Set 2 that we’re playing with, but we’d love to hear what Eternals you’d want to see for your favorite champions going forward!

What Do I Get for Leveling Up My Eternals?

When we decided to add progression to Eternals, we wanted players to have moments where they felt especially awesome with rewards that felt unique. One of the ideas we were inspired by came from the fitness world: Personal Bests. We loved the idea of Eternals being a way for you to capture an awesome game on your main, and let you show it off to everyone in the moment.

We didn’t want everyone to hit their Personal Best in their first or second game, though, so we made it a reward that’s revealed after rekindling an Eternal. Rekindling is when you hit the 5th milestone on one Eternal, and it has a ramping progression that takes roughly the same amount of time as it does to get Mastery 5 on a champion. Once you’ve rekindled your Eternal and unlocked your Personal Best, the time between milestones flattens out so that you can see your achievements more frequently!

Additionally, beating your Personal Best in a match has a special milestone callout in-game that highlights the moment to everyone, and it will also be mentioned in the end-of-game screen!

A personal best milestone in action.

We also wanted to find a satisfying set bonus reward for rekindling all of the Eternals in a set that could scale over time. Like most great ideas, the answer came from players in early playtesting of the system: an upgraded Mastery Emote! This idea was really exciting for the team because it meant expanding on something that players already understand and use, rather than introducing a new keybinding. Now when you rekindle all of the Eternals in a set, your Mastery Emote will upgrade with special marks and an evolving flame effect to indicate how many sets you’ve rekindled!

The first Mastery Emote upgrade from rekindling a set.

What’s Next for Eternals?

Launch is just the beginning for Eternals! As we said earlier, we’re already in the process of making Set 2 for all of the champions in the game, but we want your feedback after you’ve had a chance to play with the first set. We’ve also been tossing around a few ideas for additional features for Eternals, like letting you skin your milestones (e.g. Star Guardian or PROJECT) or seasonal leaderboards, but nothing is set in stone just yet.

We’re super excited to get Eternals in your hands and can’t wait to see you all flexing your achievements to the world. See you on the Rift!