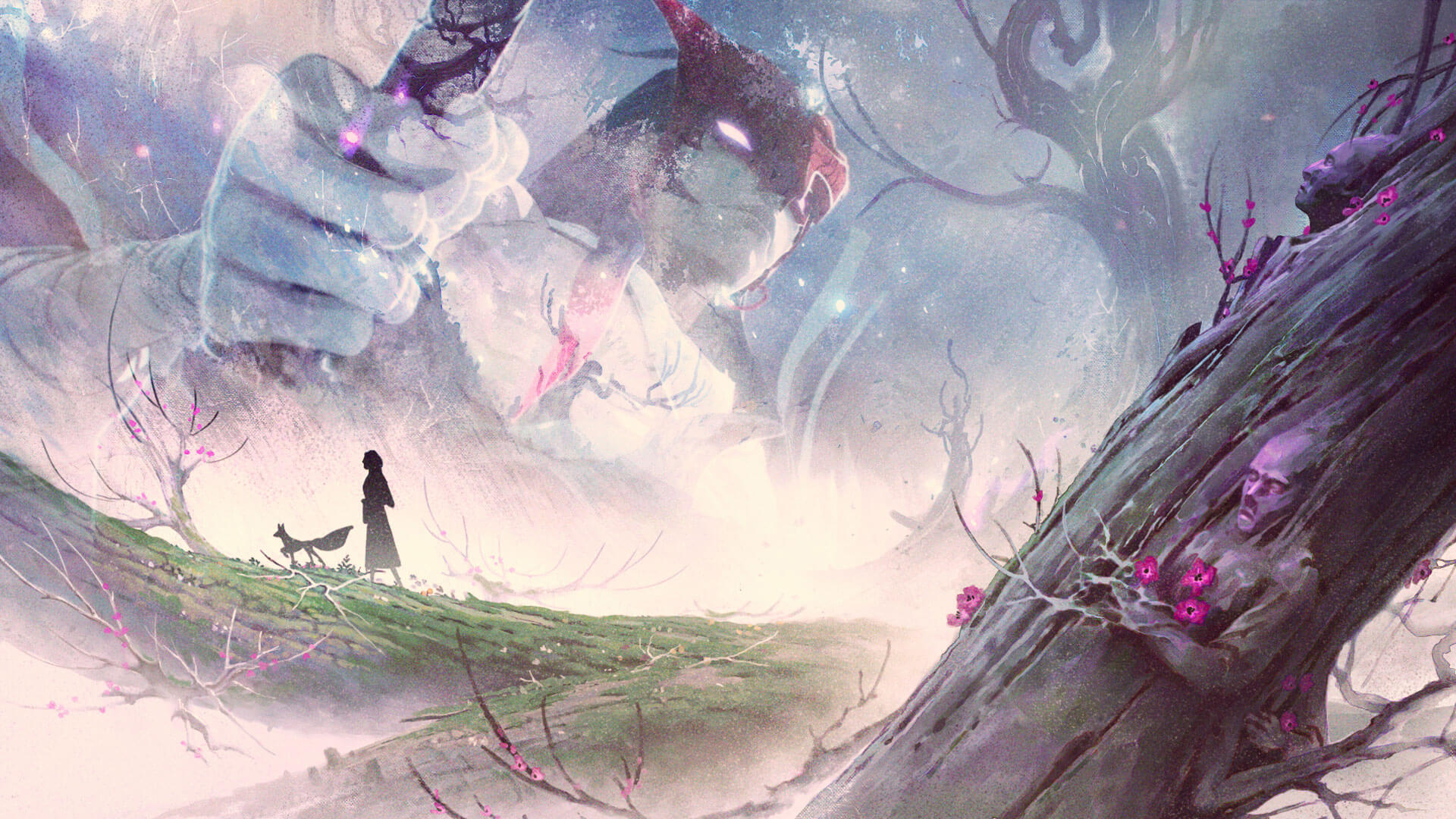 Dev
Finding the Spirit of Ionia

The videos that capture two brothers bound by one story.

Editorial note: Welcome back! We hope you’re enjoying Spirit Blossom as much as we enjoyed making it. In case you missed them, check out the worldbuilding and Spirit Bonds articles, and be sure to come back next Tuesday for a look at the Spirit Blossom skins’ sound design.

There’s a fine line to walk when writing new stories for champions in League. We want to move their lives forward, but at the end of the day they all have dedicated players who care, so we need to treat them with care. Yone and Yasuo are no exception—if anything, they’re more difficult to portray because of their complicated past.

Kin of the Stained Blade and The Path, An Ionian Myth give us some insight into Yone’s and Yasuo’s stories. We witness their years of training, the moments when the honor-bound elder brother tempered the steel of the younger, and the fatal day that brought it all to a grinding halt.

But that day couldn’t be the end of their story. Not when Yone has returned, Yasuo is still seeking redemption, and both can’t seem to shake their past. So how do we move their stories forward in a way that feels authentic to them both?

A Broken Past, A Reforged Present

“We had two really good stories to tell,” says creative lead Mike “Riot Grizzly” Berry. “There’s the story of Yasuo killing his brother and dealing with the aftermath—how it rips him apart and how he becomes disillusioned and has to find his path back. And then there’s the story from Yone’s perspective: How he goes into the spirit realm, ends up fighting his way out, and the changes he endures.”

In The Path, Yone’s origin story takes on a more... interpretive approach. When the folklore version of Yone arrives in the spirit realm, he’s led by a certain spirit fox on the path to peace and rest. But he’s confronted with a choice: Follow the fox or listen to the spirit of obsession and dwell on the decisions he made in life.

“Yone’s conflict in The Path is something every single person in the history of life on Earth faces eventually,” says publishing creative director Anton “Riot Manton” Kolyukh. “It’s the struggle to become overwhelmed by something that happened, or put it aside and move on. It’s really universal. We really wanted players to understand Yone’s struggle, and to empathize with his decision.”

Yone allowed guilt and rage to overwhelm him, empowering the azakana who’d been hunting him to strike. And while Yone survived the encounter, his path was forever changed. He found himself back in the mortal realm with a new look, new sword, and new purpose: Hunt down and slay azakana.

That’s what led him back to Yasuo.

“While I was writing the script for Kin, I talked a lot with Michael ‘Riot Pls’ Yichao, who was working on Yone’s character development,” says narrative writer Dana Luery “griddlebones” Shaw. “I initially was trying to understand who Yone is as a champion, but it became clear that this is the story of two brothers, and to understand them I needed to understand their relationship.”

Kin follows Yasuo’s struggle to overcome his despair, but his inability to make peace with the past has dire consequences in the form of an azakana that comes to feast.

The final chapter of the brothers’ story together is one of absolution. When Yone and Yasuo finally come face-to-face in Kin, they must choose to either confront one another for their past transgressions, or to move on, come together, and slay the azakana. It’s their choice in this moment that allows Yasuo to finally stop running from his past, and instead look towards defining his future.

The stories within The Path and Kin are really just a single one split into two parts. “But why, Riot? Why wouldn’t you just tell the story from start-to-finish in a single video?” Good question. Like the story within these two videos, the answer is multi-part. 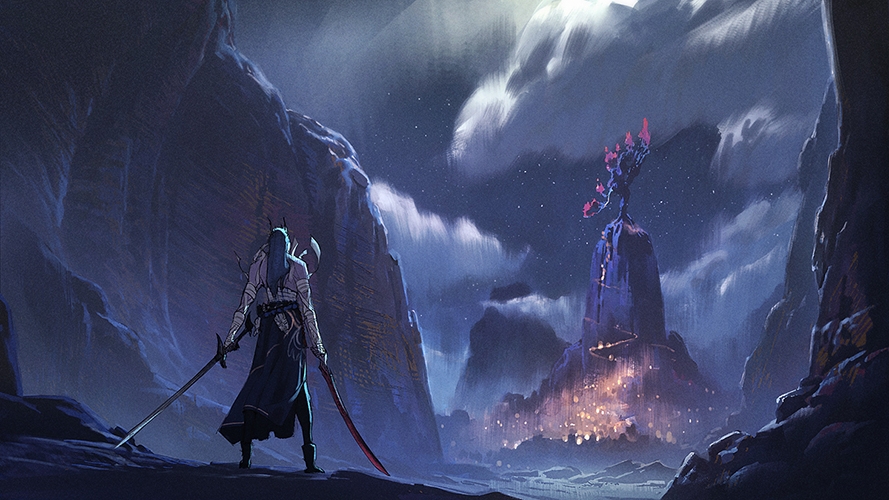 “When we first began thinking about Spirit Blossom, Yone, and the campaign as a whole, we identified that there are two parts of Yone’s story,” explains senior narrative writer Phillip “KneecapPhilly” Vargas. “One, of course, is the story of who Yone is now—the champion in League of Legends. The other is of the brother who was killed by Yasuo, and how he became the Yone he is now. We knew The Path would be released first, so we decided to focus on that story.”

Because The Path acted as the trailer for Spirit Blossom, it needed to tie into the broader event. And because Spirit Blossom focuses on Ionian folklore, the team felt it was fitting to take a more mystical approach. 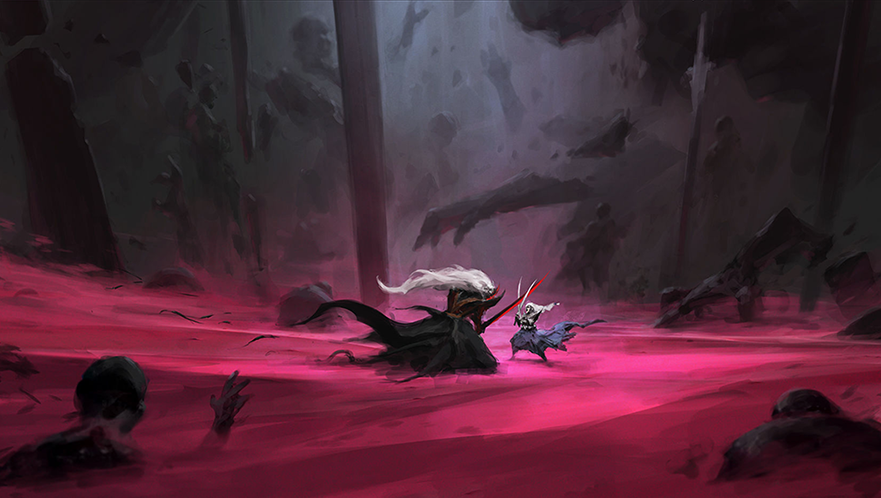 “We used the work that the thematic development team did on the Spirit Blossom skins as inspiration for the art style for The Path,” Riot Manton explains. “We really wanted to take players to a place they had never seen in League before. The whole feeling is supposed to be like folklore has come to life. The images should feel like a hazy memory of something that lives on the tip of your tongue, in your imagination but not entirely real.”

Music is an incredibly powerful component for visual storytelling. It helps set a mood and can draw viewers into the story. To mirror the approach The Path took with art, producer Joe “Riot Joepod” Schlamme needed to find a composer who could hit the folklore style that the team was looking for.

“It’s obviously really easy to go towards a traditional East Asian-inspired score, but we originally thought about using instruments and melodies from Slavic and Nordic traditions,” says Riot Manton. “But when Riot Joepod brought Yutaka Yamada to our attention, we realized we needed to go with what fit his musical style. He was showing us beautiful East Asian inspired music, and it fit with what we were looking for. So we ended up going a bit more traditional in the end.”

In contrast to the mystical elements The Path’s team took, the team creating Kin decided to go for a more realistic approach.

"It was tempting to just focus on Yone's journey. There's so much there. A murder, a fight through the Spirit Realm, even a cool new mask! But the beginning and the end of that path both lead you right back to Yasuo,” says Riot Grizzly. “I'm glad we were able to get both stories in front of people because while we don't know where they're going next, it's really impactful to know how they got here and the toll it's taken on both."

Focusing more on Yasuo meant the team needed to dive deeper into his past and show how he ended up where he was. Which meant showing the moment it all went wrong.

“We decided really early that we wanted to show the fight between Yasuo and Yone in the form of flashbacks, but we were concerned that it could get a little confusing for players,” explains senior video producer / Kin product owner Scott “RiotSkewt” Roukema. “We were working with Haoliners Group on the video, and they have a really beautiful 2D art style, and wanted to push their limits and do more 3D. We ended up using a blend of these two art styles to clearly show the transitions between Yasuo’s past and his present.”

The end result should feel like a seamless flow between Yasuo’s storied memories and the stark reality of his present.

“When approaching the score for the Kin, we really wanted to create a musical language that spoke to the real, organic, and natural feel of Ionia,” says Riot Joepod. “We felt Brian D'Oliveira's deep knowledge of a wide variety of world instruments, representing a huge array of cultural and stylistic influence was the perfect fit here.”

Originally the music in Kin was going to take a more stylized approach. Yasuo as a champion doesn’t fit into Ionia, and the team wanted that to reflect in the music as well. But as they narrowed the story down to the relationship between the two brothers, and their struggle to move forward, the team felt that doing anything too modern and irreverent might detract from that. In the end, the final score evolved into something that reflected a much deeper story.

“In my mind Kin is the slam dunk to The Path’s alley-oop,” jokes Riot Manton. “This story is about how these characters begin their journey of growth and put the past behind them. We see that in Kin with Yasuo, and we see the same choice made earlier by Yone in The Path. The coolest things about each of these champions couldn’t be the other, and I think each of these videos serves to highlight the differences in them, and helps make them each stand apart together.” 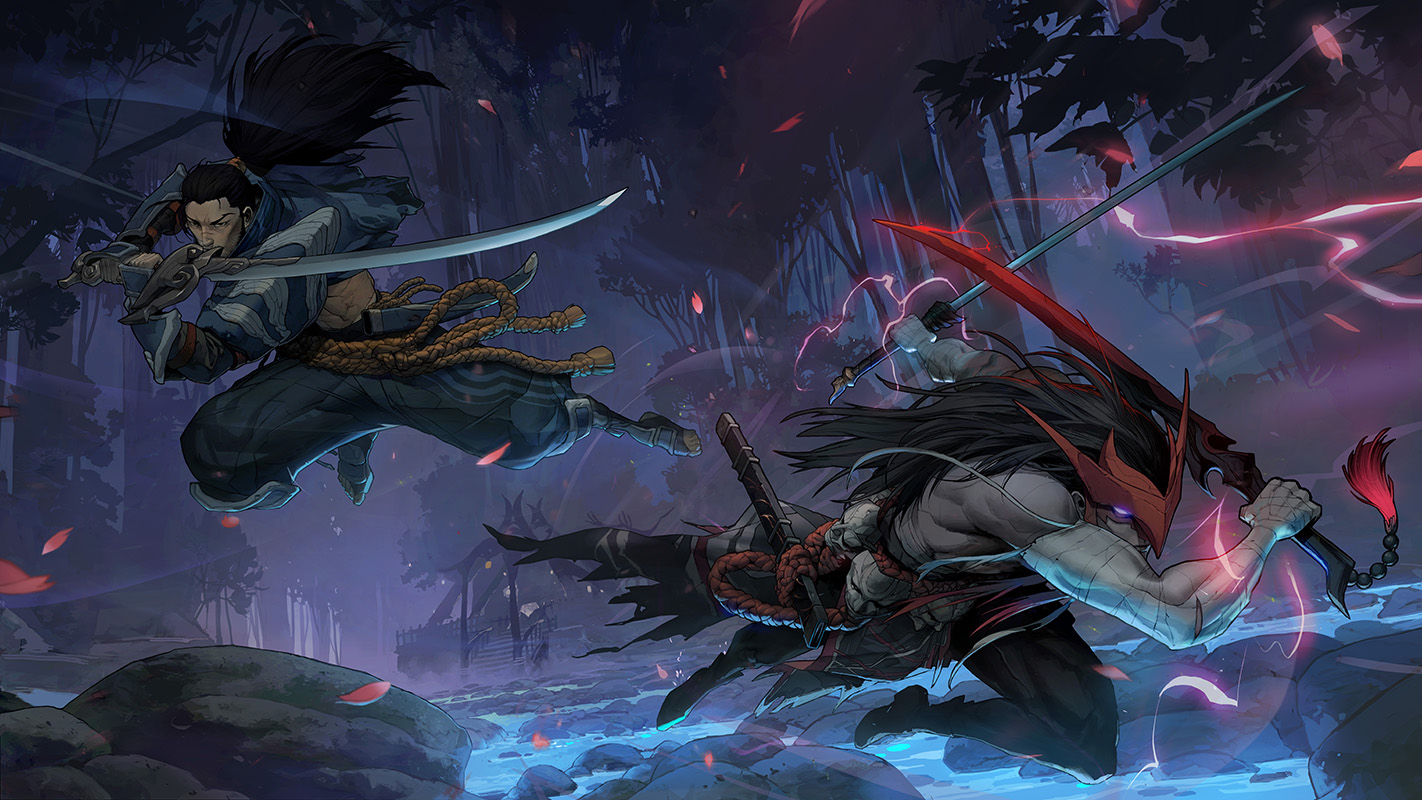 “So much thought went into the journeys that these two characters have gone on,” adds senior creative services manager Mike “fragilemk” Hunau. “I think for me, the most exciting part is seeing how the choices these champions made reunite them in the end, and instead of focusing on their past, they’re ready to continue their lives, no matter where it brings them.”