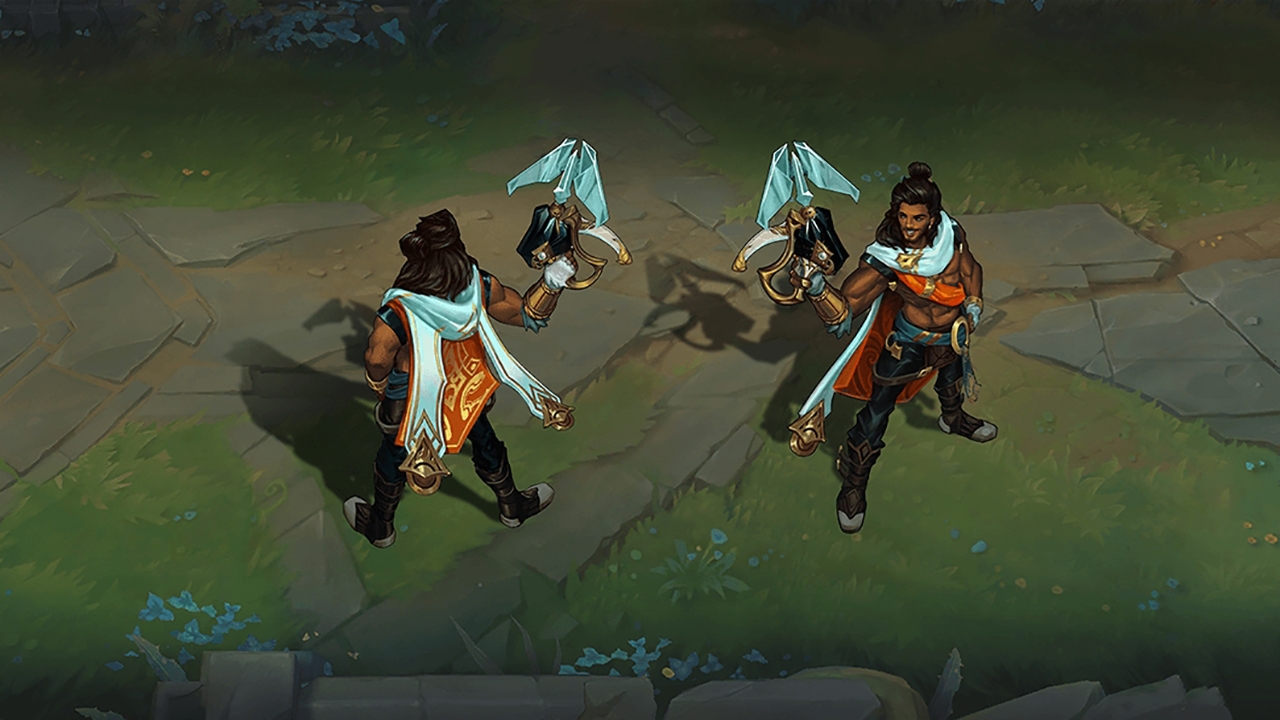 Why does Akshan have a revive?

Hi everyone, I’m Jag. Before I became the Lead Game Designer on Summoner’s Rift Team, I was a Champion Designer, and the last project I worked on there was Akshan (with Riot Twin Enso). I’m here to talk about him a bit.

Akshan is a mid lane marksman assassin, built to play aggressive early on in the game by roaming and skirmishing. His intended strengths include:

His intended weaknesses include:

But that’s not what you’re here for; you’re here to ask “do you have any idea exactly how powerful this revive is?”

To which I’d answer—of course not.

And that’s the point.

Our job as champion designers is to make new champions that excite players in unique and novel ways. You, the players, decide through your champion picks whether we succeeded when making a new champion: Whether they're worthy of pouring hours into discovering and optimizing. To go a step further, I feel our best champions are ones who can only be optimized by the community. If our teams can perfectly optimize a champion through internal playtests alone, there's not enough substance. Watching the community finally get to play a new champion is the most exciting part of the project for me, when players discover the ins and outs and the new mains show us something new.

So, no, we're not exactly sure how powerful this revive is. Sometimes Akshan will resurrect a single ally who will proceed to instantly run it down again. Sometimes he'll solo turn a game by killing a Scoundrel that just got a Quadra Kill, reviving his entire team to march forward and take the Nexus. We know just how much potential this mechanic could have, and that drove us to put constraints on this effect (like clearing all Scoundrel marks after taking down the first one), but we won’t know exactly how much power it affords until we get to see live data.

The follow-up question here is “Why would you do something so risky?” And our answer is because every new champion design owes you something unique, exciting, and new. Even when the new unknown factor isn't as loud as a revive, you deserve more than 1-to-1 repeats of champions in the same role with the same patterns and builds. Without taking risks, we wouldn’t have a support with a resetting execution ultimate, or a marksman that has to stop to reload, or a wind samurai that deflects bullets. Beyond that, one of League’s core identities is change, and that applies to how we design, not just what we design. We put stuff out there and sometimes we succeed, sometimes we fail. When we fail, we’ll make changes to keep trying and keep iterating until we get there.

The last question we heard a lot is “Why should Akshan have this revive instead of someone more support-y? I’d rather have more combat power.” The first answer, in terms of what led our exploration into the team utility space, is that it matches who Akshan is as a person. He’s a complex hero on a journey to find a way to be a part of the world. He’s lived his whole life on his own, but now wants to live in a way that lets him connect with people and help them, even if doing that could severely cost him.

Of course, it has to go beyond that—the revive has to make sense in terms of gameplay. Players talk a lot about champions that are not just fun to play as, but also fun to play against. We summarized those in the two lists up top and expect a lot of followup conversation will focus there, but I also want to talk about designing Akshan as a champion who's fun to play with.

League is a cooperative game. Winning requires teamwork. When designing an exceptionally selfish character archetype (the overlap of Assassin AND Marksman), finding a way to let them contribute to the team that aligns with the exact way they want to play was an incredible challenge. It's really important that when you see Akshan deep in enemy territory looking to hunt down the enemy Scoundrel instead of grouping with everyone else, you know he's still part of the team, and you can root for him to succeed because you know he's there for the team.

Tying it all back, that idea of hunting scoundrels to help your team rather than just padding your KDA is one of the key ways Akshan offers something unique. To riff on that one Henry Ford quote, "if I had asked [assassins] what they wanted, they would have said [kill squishies better]." No champion appeals to everyone, but I truly believe some of you are going to love playing this marksman-assassin who wants to help his team. That's a new experience for League. And that's why it's worth it.