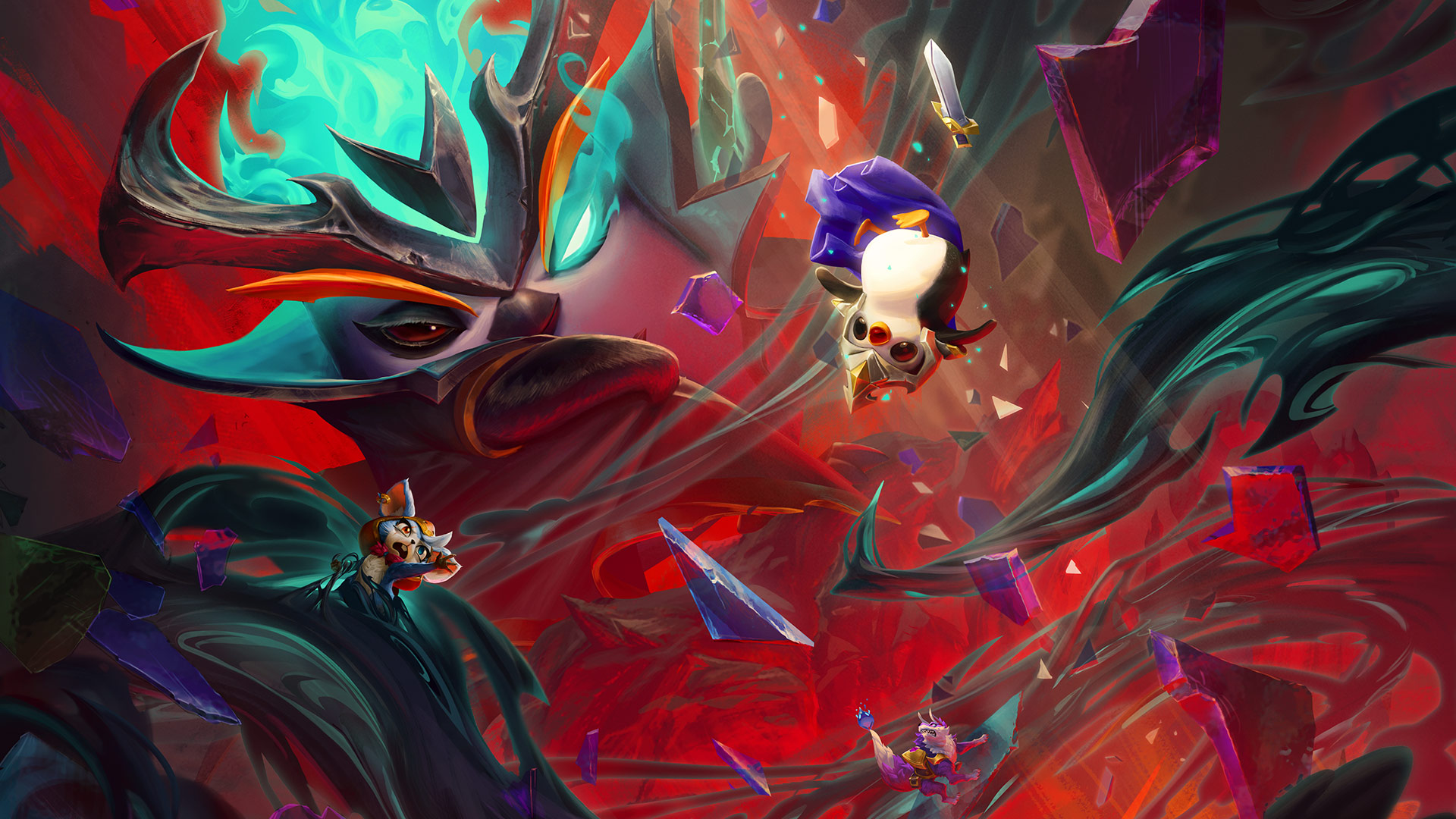 A sneak peek at a few team compositions that are coming with Reckoning.

Well, I reckon it’s about time for the Reckoning Gameplay Overview. About a month ago we officially announced Teamfight Tactics: Reckoning. By now, you know the drill: in with the new means out with the old. With the arrival of Reckoning we must say goodbye to the Chosen mechanic from Fates. But don't despair! With its departure comes the reckon-struction of a new set mechanic: Shadow Items.

The Black Mist has poured across the Convergence, corrupting everything it touches—including items! Shadow Items are the new set mechanic for Reckoning. Corrupted by the magic of the Black Mist, they’re more powerful than their original counterparts—but with a twist— and often, a price.

Shadow Components can appear in every carousel after the first one, as well as in the Armory—a pop-up shop where you choose from a selection of item components, similar to how you buy champions. It’s important to note that the Armory will also play a major role in Hyper Roll, and is likely to stick around. From a mix of Armory and carousel options, players should expect to get two to four Shadow Components in any given game depending on their choices.

The power of the Mist is all-consuming, so just one Shadow Component is enough to corrupt an entire completed item, even when combined with a regular component. And before you ask, no: two Shadow Components do not create an uncorrupted complete item. Once an item is corrupted, there’s no going back. That said, you’ll almost never get a Shadow Item that you didn’t opt into—the ‘almost’ depending on your luck in carousels. The Shadow Item mechanic is meant to increase the impact of strategic player choices. Only want one Shadow Item? You can do that. But I’d consider fully embracing the darkness, because in it lies power.

When used correctly, Shadow Items are MUCH more powerful than base items, but if used carelessly, they can cause your team more harm, than good. Here are some sneak peaks:

With great power, but risky drawbacks, Shadow Items can be mixed and matched with various team compositions to make for powerful win conditions. Can you imagine Draven throwing axes faster and faster while dealing damage to himself, but also healing back with a Bloodthirster? That’s a scary build, but it gets even scarier when we talk about the team comp you can run it in. Which is right after this disclaimer. We’re going to dive into a lot of gameplay content here, but as always, this stuff is subject to change if the devs find areas of improvement, and they’re always looking for those areas. I’ll also add that there’s a whole lot more in Reckoning, so let this article serve as an appetizer for your first couple of games.

In this composition, we’ll be running the entire Forgotten roster by level 9: 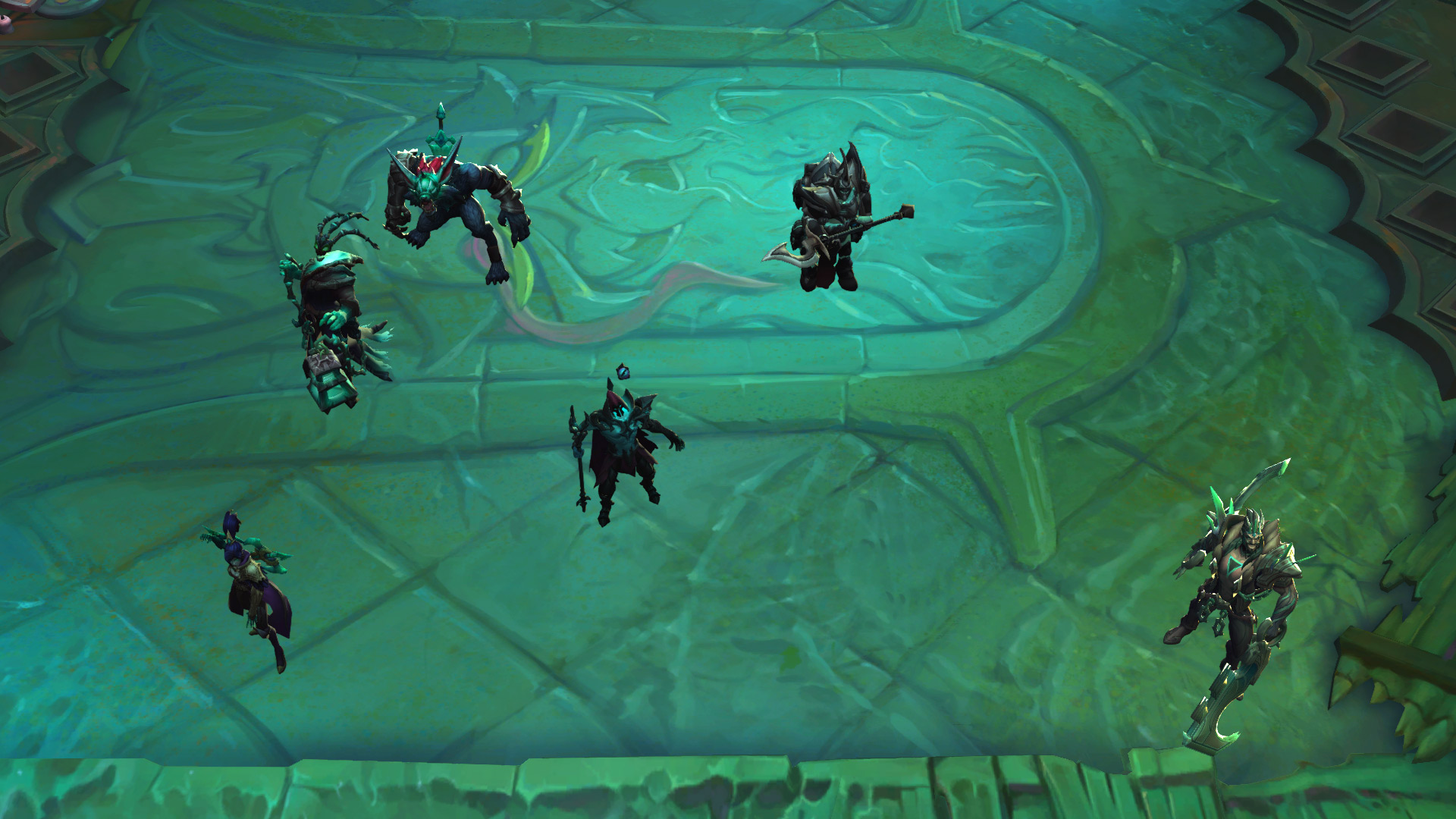 Forgotten compositions scale well into the late game with Shadow Items, but can drag through the mid game. If you’re struggling early, roll to get your 1 and 2-cost units to two stars and slam some Shadow Items to stabilize. Once you get to the late game, you have plenty of carry options that you should prioritize depending on your items. Have a lot of swords and bows? Draven’s your DRAVEN. Tears galore? Keep your eyes on Ryze, as his spell, Flux Prison, becomes empowered after its initial cast allowing the single target stun and damage to spread to enemies in a large area. Have protective items, or just a lot of Rods? Viego will take those to turn enemy champions against each other.

Hellions gain Attack Speed that scales at (3), (5), and (7) Hellion units. Whenever a Hellion unit dies, an imperfect Doppelhellion of the same unit will leap from a Hellion portal and join the fight.

In this composition we’ll be running all six Hellion units: 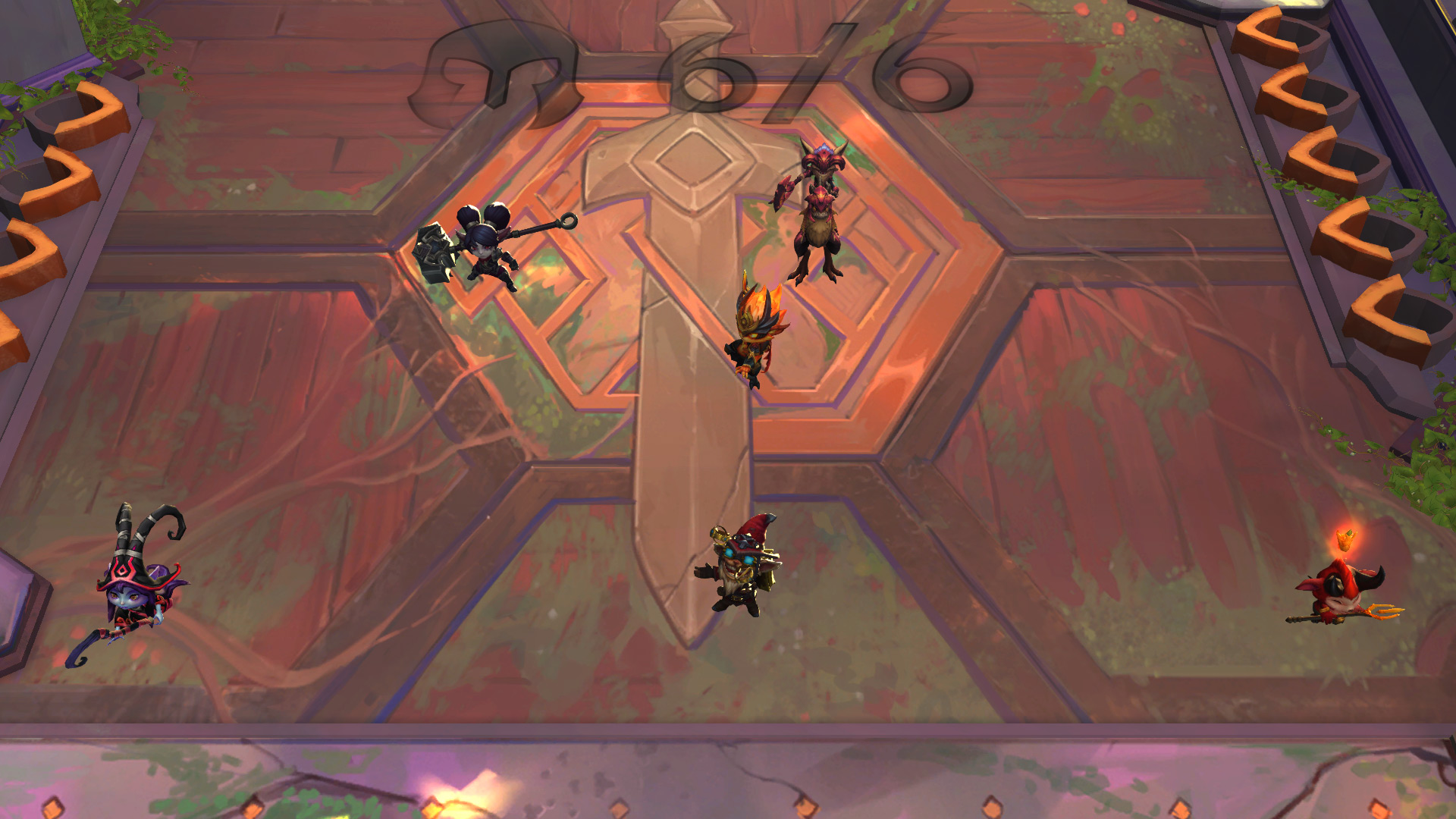 This comp comes straight from the fiery depths of Bandle City. It’s a reroll comp, so you’ll want to prioritize getting items on your three-star carries, who’ll likely be Ziggs and Kled. With only six Hellion units to choose from, you’re going to have to pick up a Hellion Emblem to hit the Attack Speed bonus at (7). Hellion Emblem can be made with Spatula and Recurve Bow, but one of these items has to be a Shadow Item—otherwise you’ll get a Legionnaire Emblem. Give your Hellion Emblem to a strong unit that shares traits with the rest of your devilish Yordles. Adding another Spellweaver or Cavalier will amp up your reroll carries even more.

Nightbringers (2/4/6/8) gain a decaying shield equal to a percent of their maximum Health the first time they drop below 50%. When this shield is applied, that Nightbringer gains bonus damage.

To hit the final tier of this trait, we’ll run the entirety of the Nightbringer roster below: 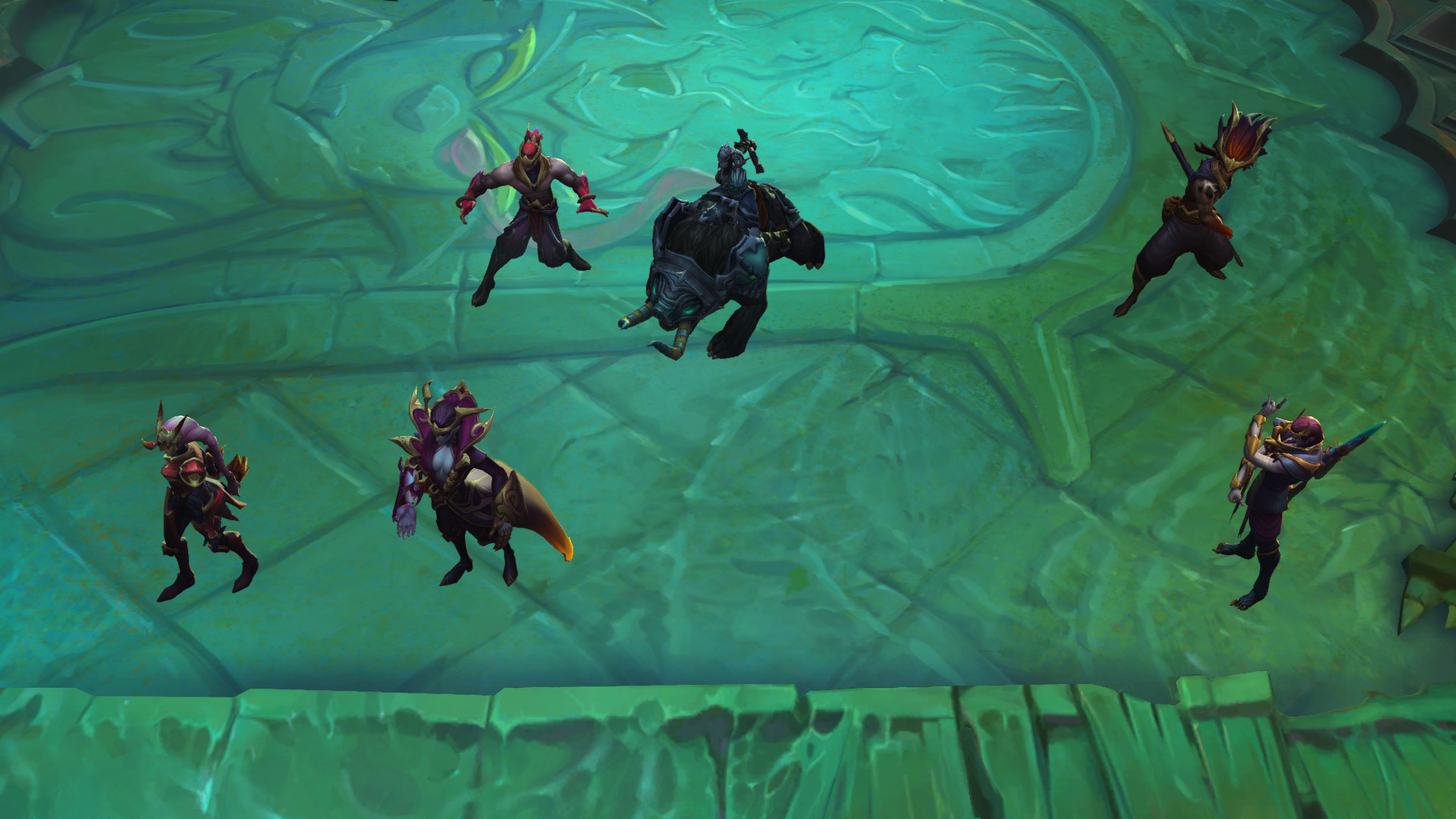 Splashing Coven (more on this later) can help you transition into Nightbringer, since these two origins have a lot of trait overlap. Once you hit late game, you can slam Attack Damage items onto your Aphelios and watch as he annihilates enemies with Dark Vigil, his aggressively scaling, multi-target burst spell. At this point you’ll also have plenty of disruption for the enemy backline, as Diana uses her assassin trait to jump to the backline and cast Moonfall, a disorienting AoE crowd control. Finally, you can grab yourself the Nightbringer God-King, Darius, who deals bonus damage to rival traits. Darius' rival traits are Redeemed, Ironclad, Verdant, Draconic, and Dawnbringer.

After night comes dawn. The first time Dawnbringers (2/4/6/8) drop below 50% health, they’re rapidly healed a percent of their maximum Health. When this heal occurs, all allied Dawnbringers gain bonus damage.

Here are the early-rising Dawnbringer units: 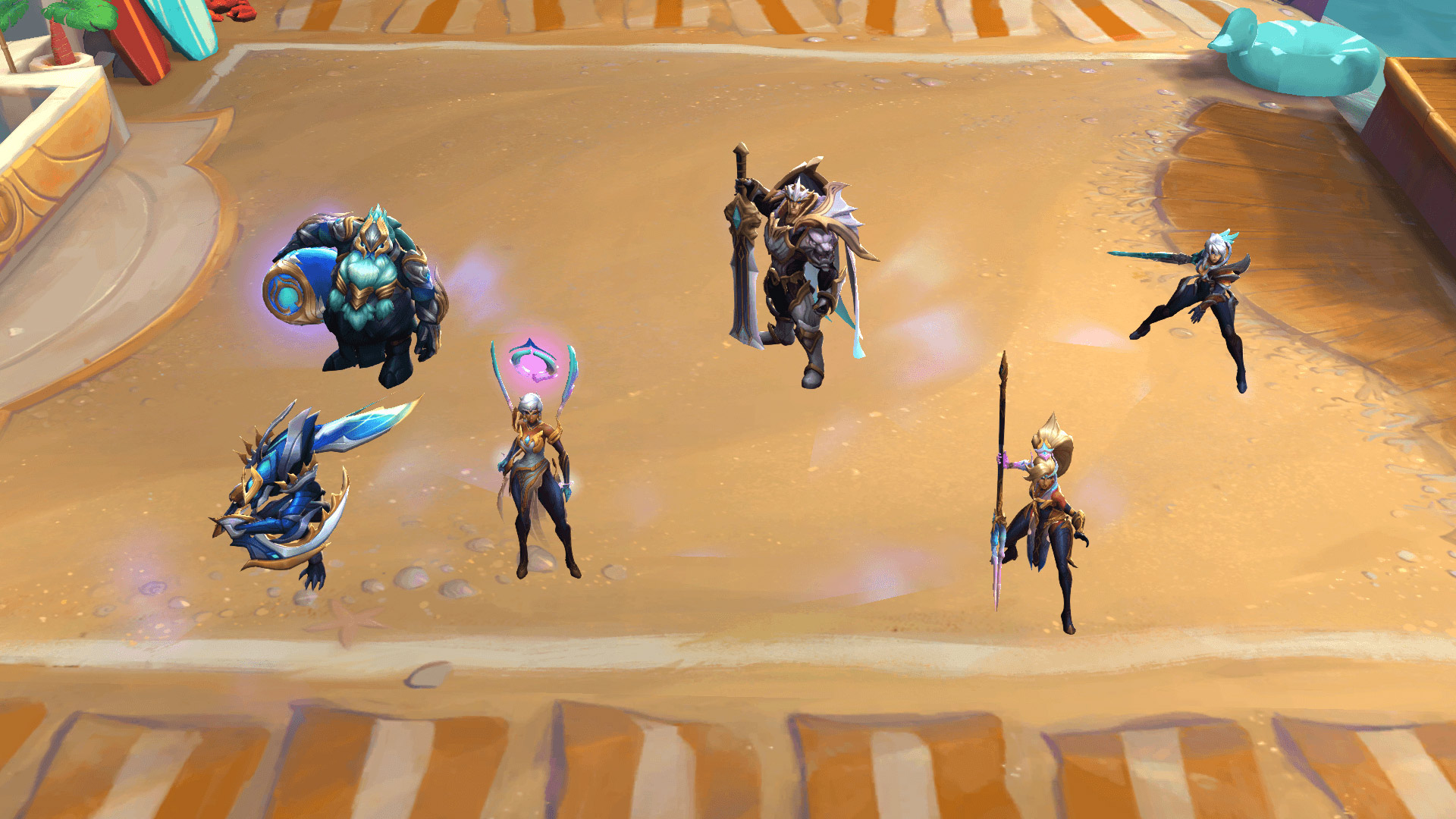 Dawnbringer comps transition well into the mid game when paired with champions of shared traits. Ivern’s a definite add to this comp, as he’ll activate both Renewer and Invoker synergies, empowering Soraka and one of this comp’s carries, Karma. Keep your eyes out for a Rod and a Spatula to create the Dawnbringer Emblem, which will allow you to hit this trait's final tier. Other items to look out for are Dodge Chance items to equip your Nidalee, who transforms into a cougar, leaps behind her target, gains dodge chance, and strikes with bonus magic damage after each successful dodge. Dawnbringer’s God-King, Garen, is wild. This 5-cost drops a gigantic sword from the sky, smashing into the ground with an AoE that deals a large percent of enemy max health in damage and shreds their Magic Resist AND shields Garen for that damage. Garen’s rival traits are Forgotten, Nightbringer, Coven, Hellion, Dragonslayer, Abomination, Revenant

Okay, let’s take a break from some of the big traits and talk about one of the most powerful 5-cost units in TFT history.

Kayle is back, again—and with a vengeance. Kayle now ascends every couple of seconds to gain bonuses. As she levels up, she scales faster, but also harder, better, and stronger.

The first time she ascends, her attacks will deal bonus true damage. Upon her second ascension, her attacks explode in an AoE around the target. Reaching her third ascension, she’ll gain immunity for 1 second after every 7th attack. Protect her long enough to reach the final ascension and she’ll become the most powerful unit TFT has ever seen, raining swords around her target and dealing huge amounts of damage.

*Shudders* Teemo’s back too, and you’re going to have to sacrifice more than gold to recruit him. Teemo’s going to cost 6 Little Legend health from the shop, but can be sold for the normal 5 gold.

Once you’ve recruited the Cruelest champion, he’ll happily scatter Infernal Souls around the enemy with the highest attack speed. When an enemy nears an Infernal Soul, or after 3 seconds, the souls explode, reducing enemy attack speed and dealing magic damage over 3 seconds. 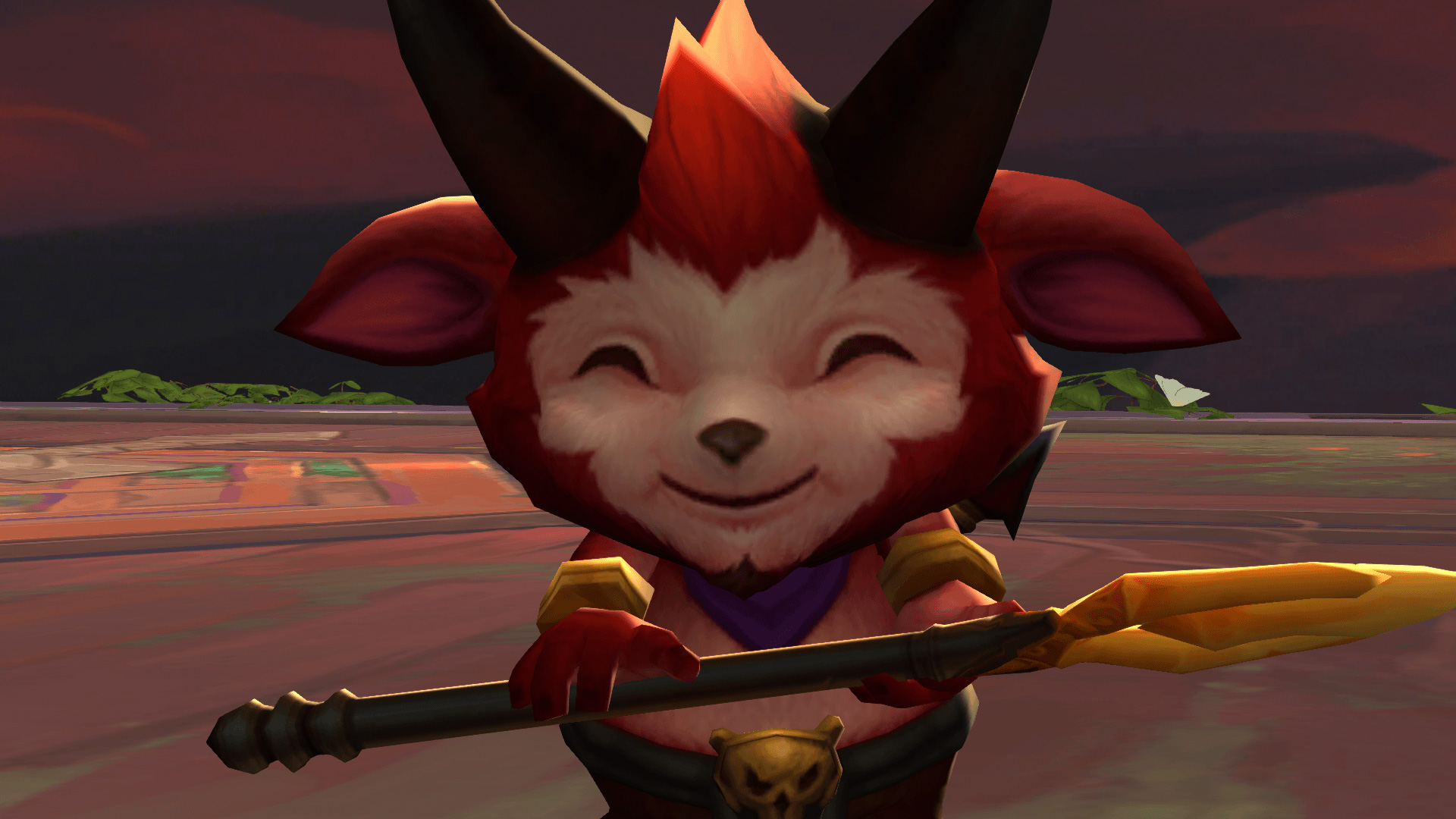 One more thing about Teemo. Never underestimate the power of his hunger in a one on one battle.

Speaking of hunger, let’s continue our spoilers with a splash of ‘splash’ traits. These are minor traits with two to four units that you can add to a variety of comps to play flexibility.

Cavaliers are charging into battle with the innate ability to dash quickly towards the unit they target. As you stack this trait, your brave Cavaliers will gain increased damage reduction (2/3/4) that is doubled for 4 seconds at the start of combat and after their charges.

Here are the champions leading the charge with this trait:

Mentioned earlier as a possible splash and early game supplement for the Nightbringer composition, the Coven trait is an all-or-nothing commitment. You’ll need all three Coven champions to activate this synergy, which elects the Champion nearest the center of your Coven units to become the Coven Leader, gaining 50% bonus Health. Additionally, each time a Coven unit casts their ability, a fraction of the mana cost is bestowed upon the Coven Leader.

Here’s who can elect your Coven Leader:

Physical damage got you down? Throw in Ironclad and you’ll be Ironglad you did it! Ironclad’s our new (2/3) piece trait that you can add to most compositions to counter an AD-heavy lobby. It works like Mystic (which is also returning) by providing all allies bonus Armor.

Here’s the list of champs that you can tech into your comp for bonus Armor:

Revved up and ready to die (twice), Revenants revive after their first death each combat. Once they come back, they take and deal increased damage. The more Revenants you add to this (2/3) trait will increase the amount of health they resurrect with.

And here are the champs who will live, die, and repeat: 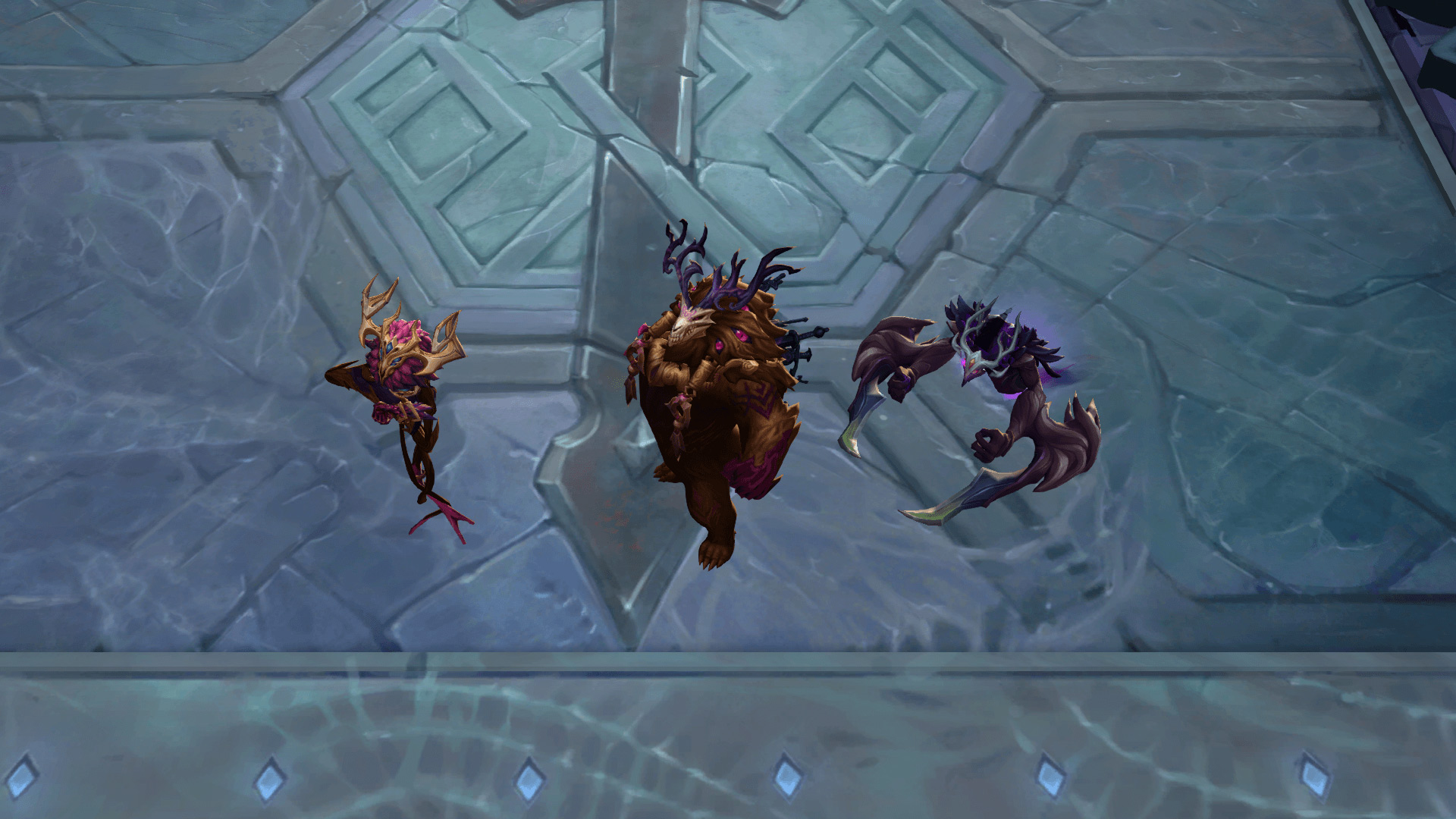 That’s all there is for now! With Reckoning hitting PBE tomorrow, we’re excited to see what compositions and combinations you come up with. The set goes live with patch 11.9, and it’s got a lot more to it than what’s mentioned above. Until next time!