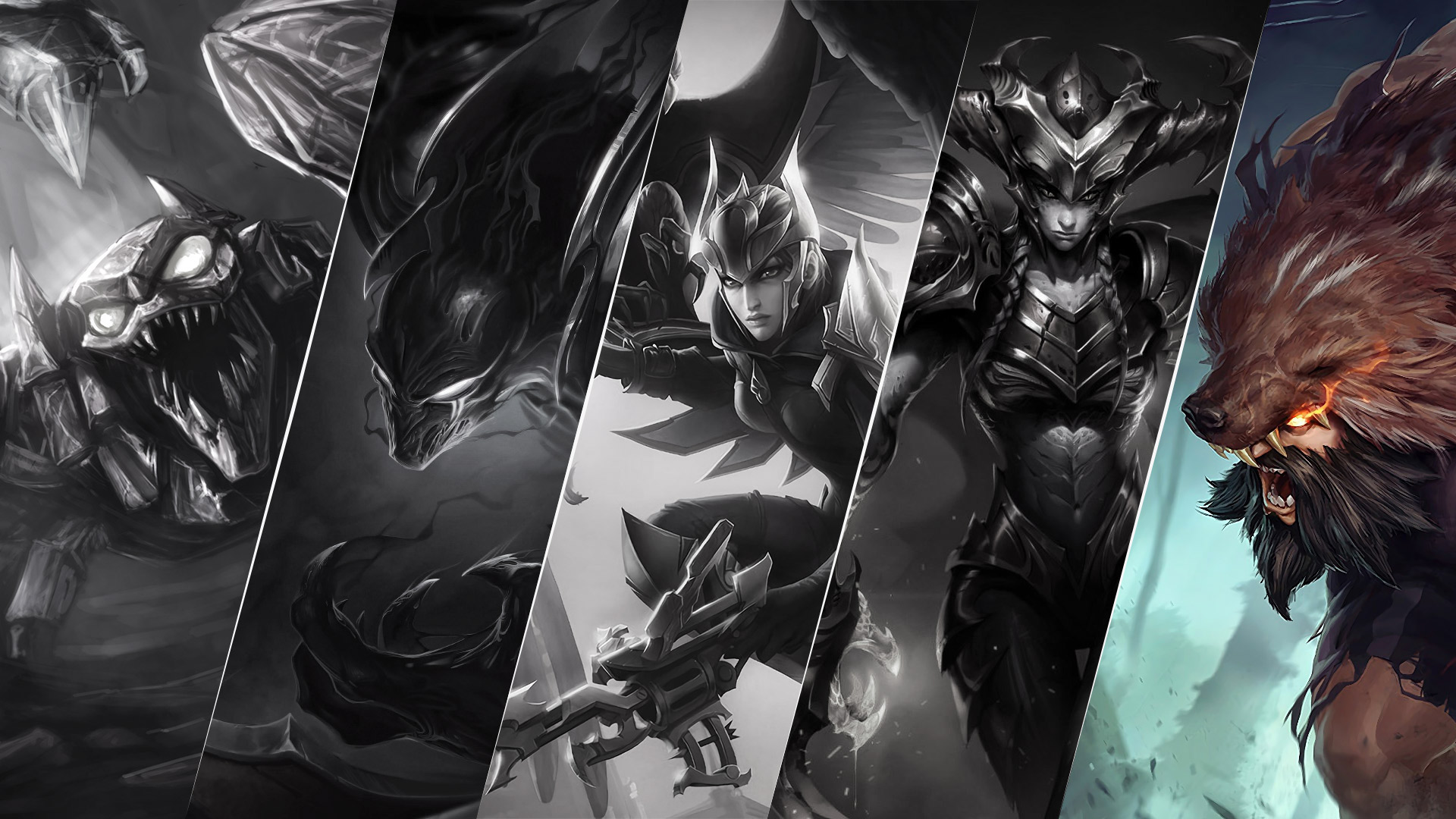 The votes are in! The thematic and VGU you chose are…

We asked, you answered: Udyr and Crime City Nightmare are the winners of the Season 2021 polls!

The votes are in, and unlike the last VGU poll where we had two candidates extremely close, this time we have a landslide victory. The champion that won by a large margin was Udyr! 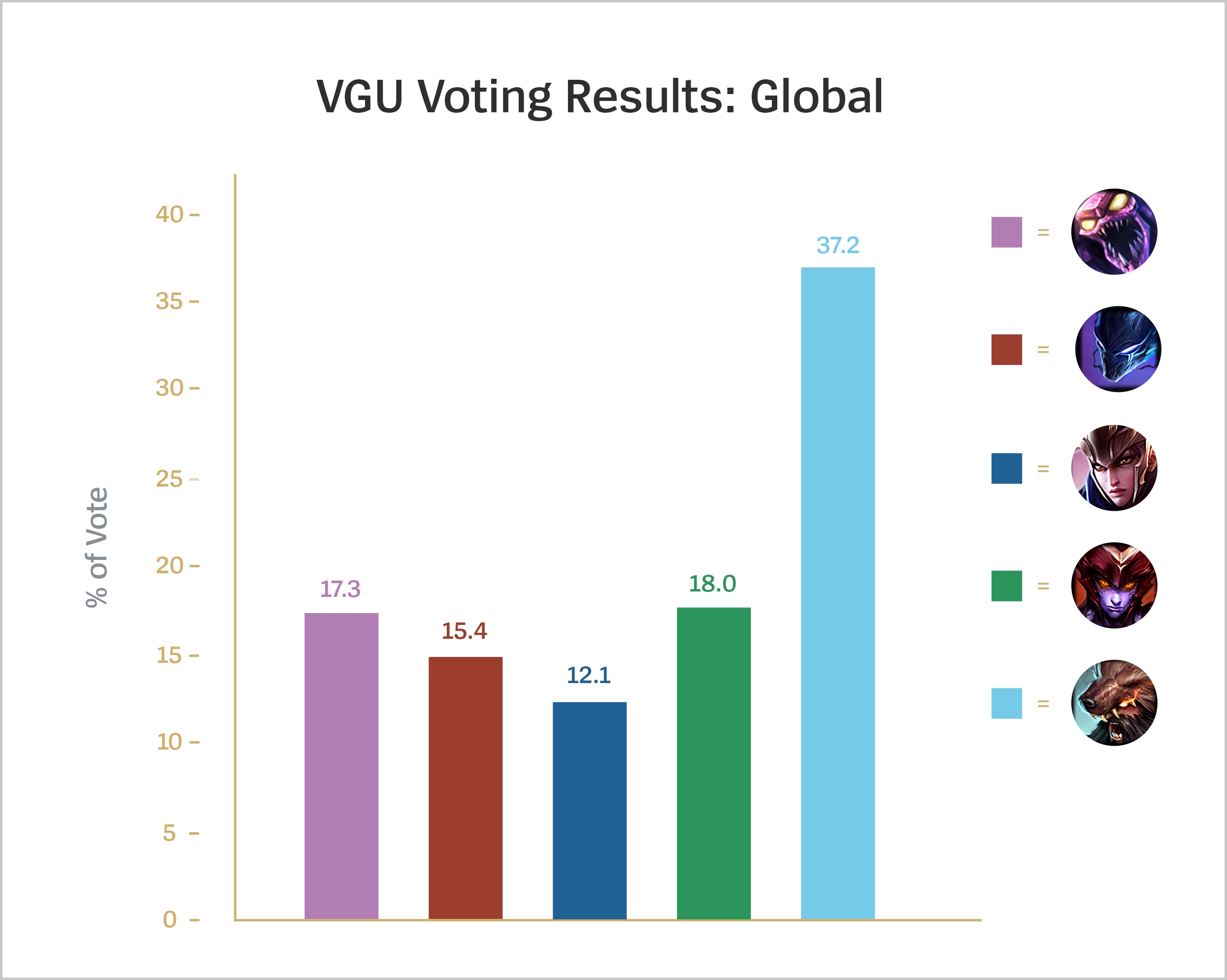 Not only was he ahead by a lot when all the votes were combined, Udyr was also far ahead in every region individually as well. We have heard loud and clear that you all want to see Udyr brought up to modern champion standards, and that's just what we are going to do.

Just like the last couple VGUs, we’ll be doing a few dev blogs to update all of you on the progress as we move along. We’ll start work on Udyr’s update soon and plan to have it ready for early 2022. Now let’s kick things off with a few words from some of the developers who will start to re-imagine Udyr for his big update!

Stash “Stashu” Chelluck, Gameplay Designer: Udyr's unique kit hook excited me ever since I first started playing League, but he hasn't quite kept up his luster as the game evolved around him. I hope to do his classic stance-dancing motif justice by pushing the unique powers and playstyles of each stance while keeping him the heavy hitting, full-melee fighter that really slaps when he closes the gap.

Justin “RiotEarp” Albers, Concept Artist: Udyr is one our oldest champions (2009?) and it's time he received his upgrade. He’s got tons of potential to be one of the coolest characters in the game, and I'm looking forward to exploring and figuring out what the best version of our bearded melee spirit shaman can be. There are lots of things with him that are already working and we can just embellish on those characteristics, namely his ancient, primal nature vibes, doing something really cool with those different stances, and making sure he feels right at home in the Freljord. 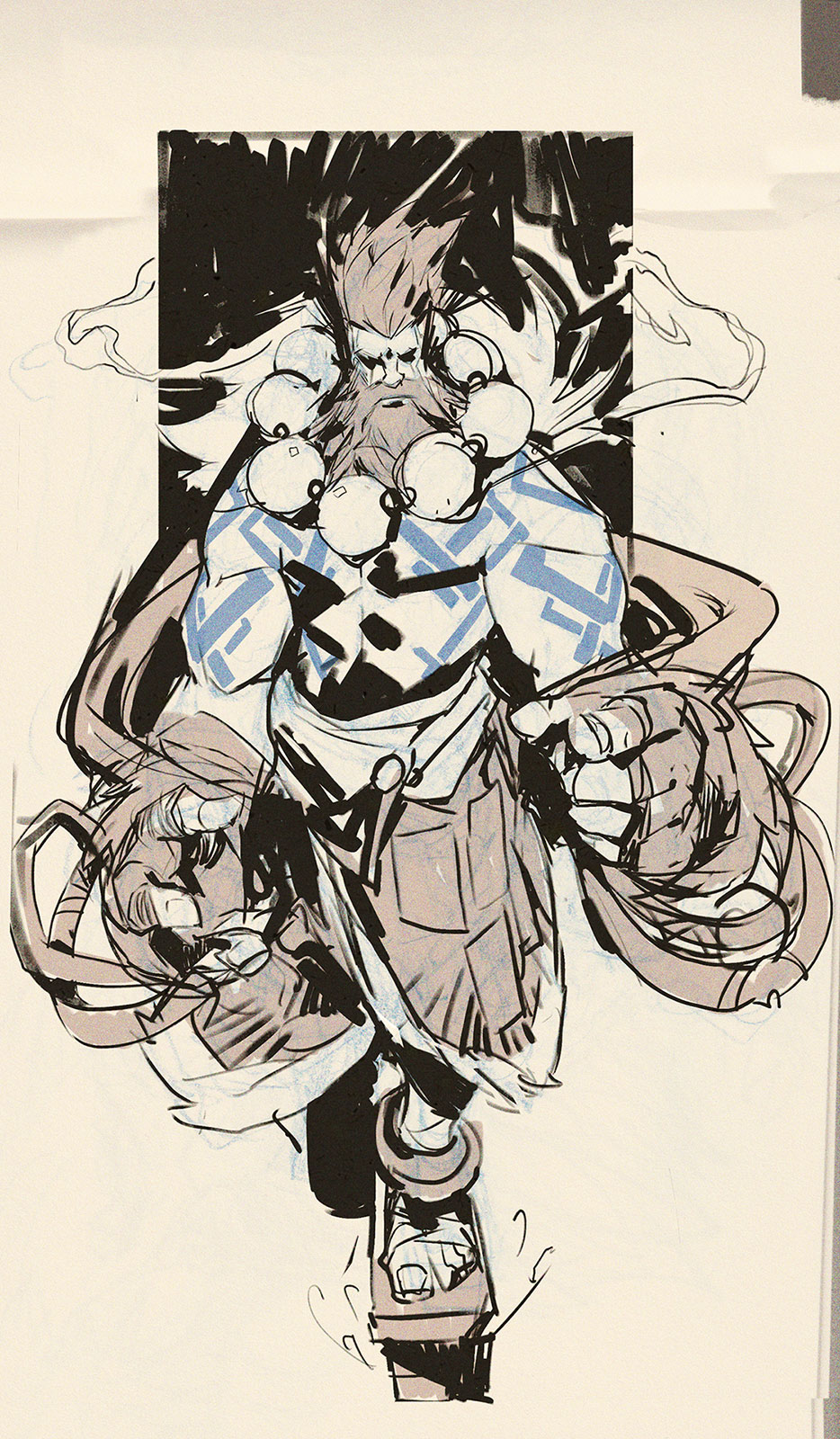 Mary “a highwayman” Gumport, Narrative Lead: Udyr has such an untamed, deeply human core. We want to do that heart justice, so we’ll be digging into how our favorite shaman can keep wrestling with everything on his mind while more deeply connecting with the ferocity and spirit of the Freljord in his own unique way. The Narrative team on League has been thinking about him and his place in Runeterra for a while now, so I’m excited to finally give him the full attention he deserves. 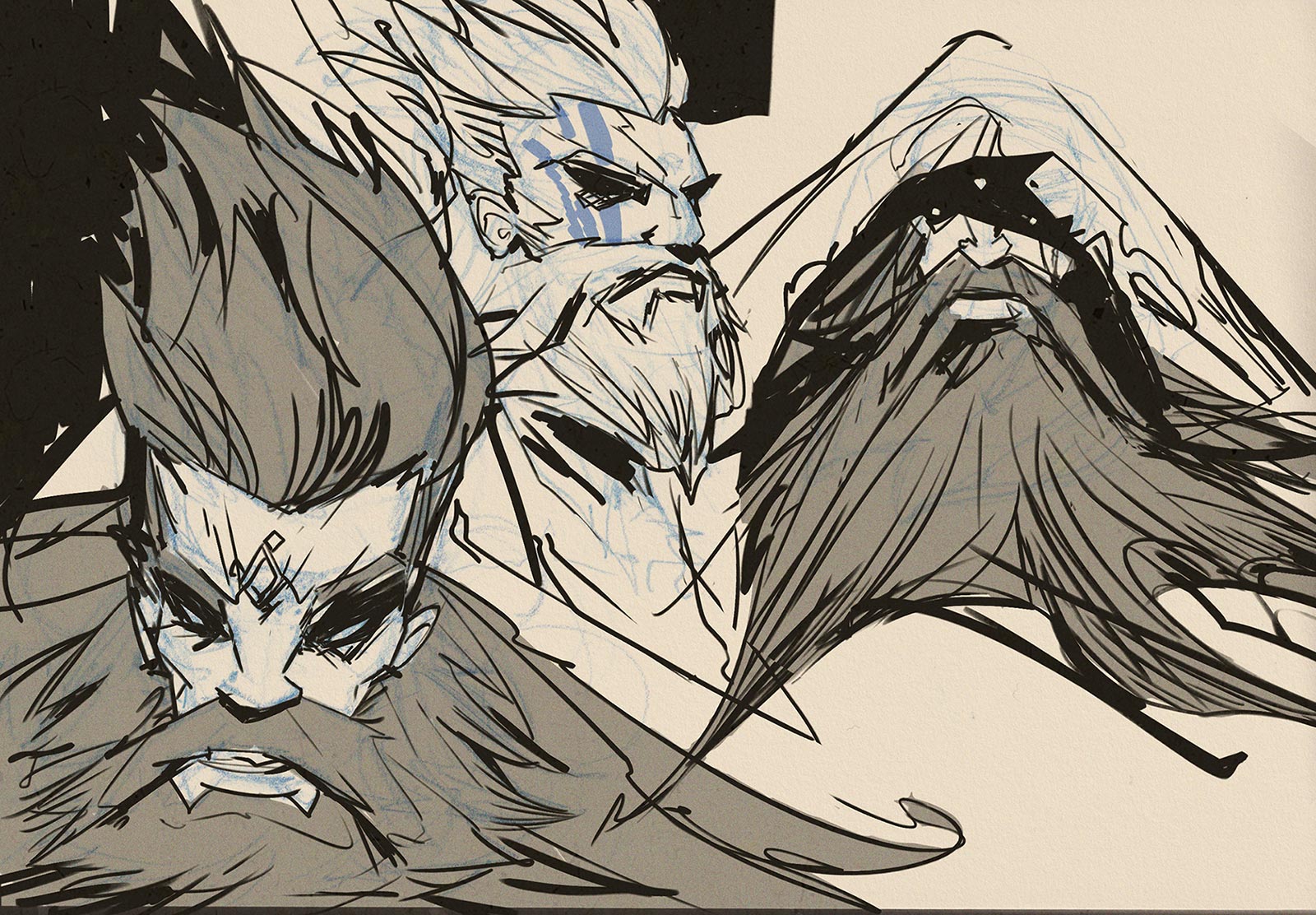 For the skin thematic voting, we’re excited to announce that Crime City Nightmare has come out on top with quite the lead! Next up was Debonair 2.0 followed by Monster Tamers closely after. Crime City won by a landslide in every region except for China, where Debonair was slightly more popular. 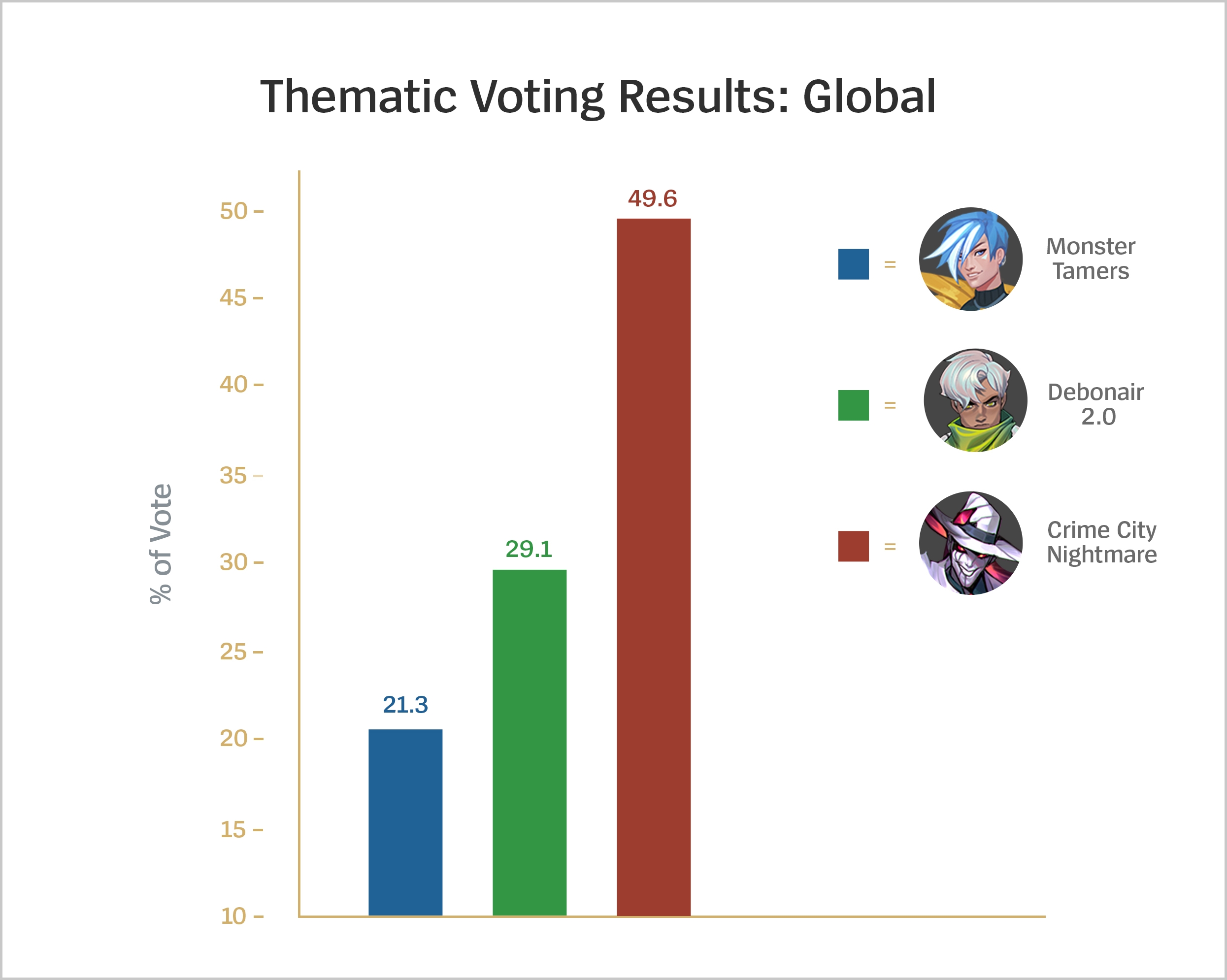 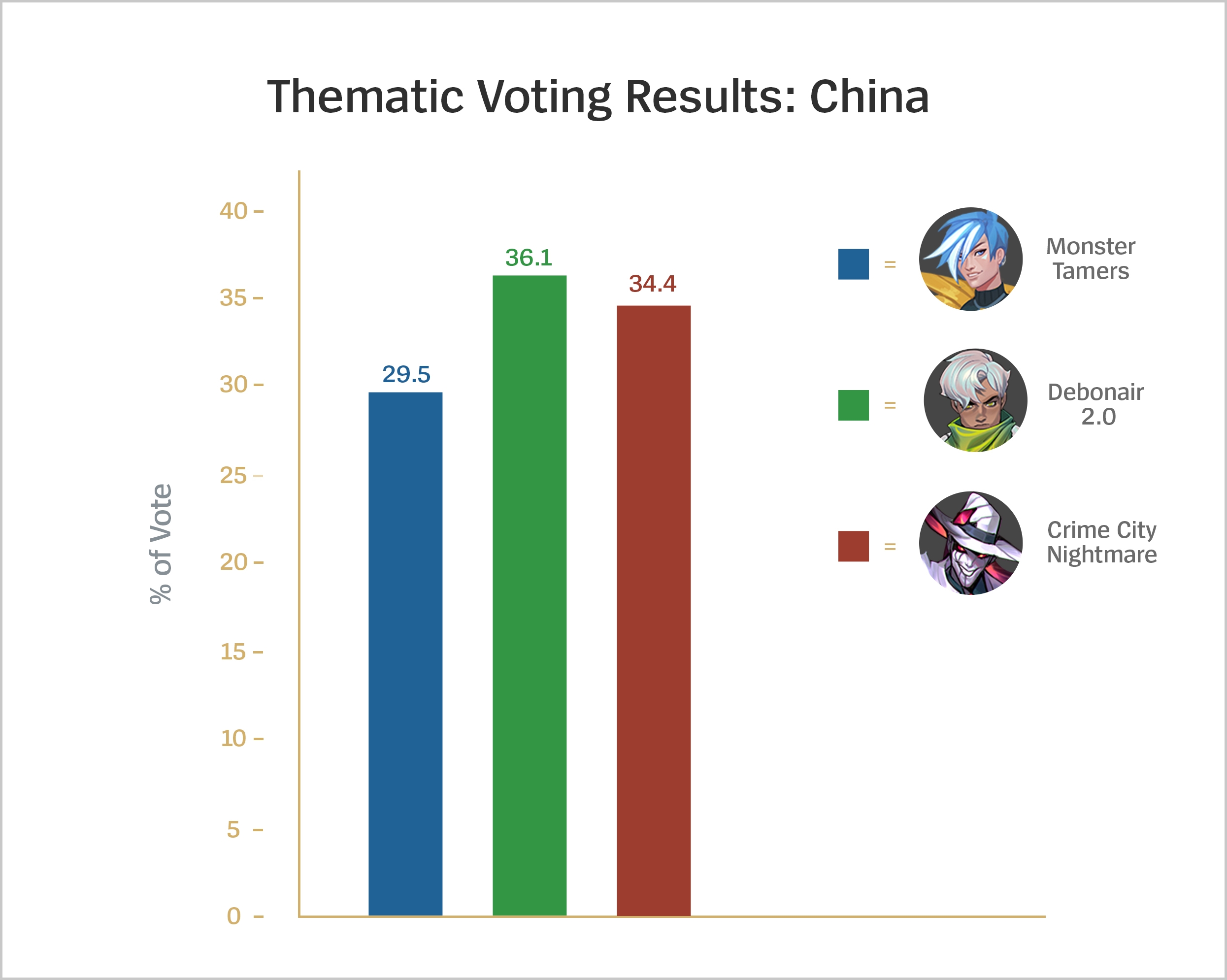 We mentioned before that we’re open to launching more than one of these thematics depending on results, and we’ve seen a lot of enthusiasm for all three choices. So in 2021, you can expect to see both Crime City Nightmare and Debonair 2.0 hit the Rift, and we’ll continue thinking about Monster Tamers further down the line as well.

We couldn’t be more excited to dig into deeper worldbuilding behind Crime City Nightmare and deliver a set of skins we hope you’ll love later this year. Right now we’re targeting Q3—so sometime between July and September—for their release and plan to give an update on progress around mid-year (without spoiling too much of the surprise!).

Here’s what some folks on the thematic development team are most looking forward to:

Karl “Riot LoveStrut” Abad, Thematic Development Producer: Fashionable crimelords making shady deals with Eldritch entities? What’s not to like? There’s a lot of exciting potential here to show a compelling horror-focused power fantasy that we haven’t explored yet. I can’t wait to see how our artists bring this eerie, sinister thematic to life. Hope we don’t go a little mad in the process...

Jared “Carnival Knights” Rosen, Narrative Lead and Chief Demon Advocate: Old-school cosmic horror meets 1920s gangland crime syndicates? Are you kidding me?! That thirst for power! Those innumerable, nameless monsters tumbling out from darkened corners at the edges of creation, cutting dark bargains as they spread across the world! A nightmare in every shadow, every flickering neon sign and rusted street lamp! Oh, it’s all so... so beautiful.

We wanted to send a big thank you from everyone on the skins and champion team for your excitement, feedback, and participation in this vote. It’s an awesome opportunity to connect with all of you as we gear up for everything we have in store in 2021.