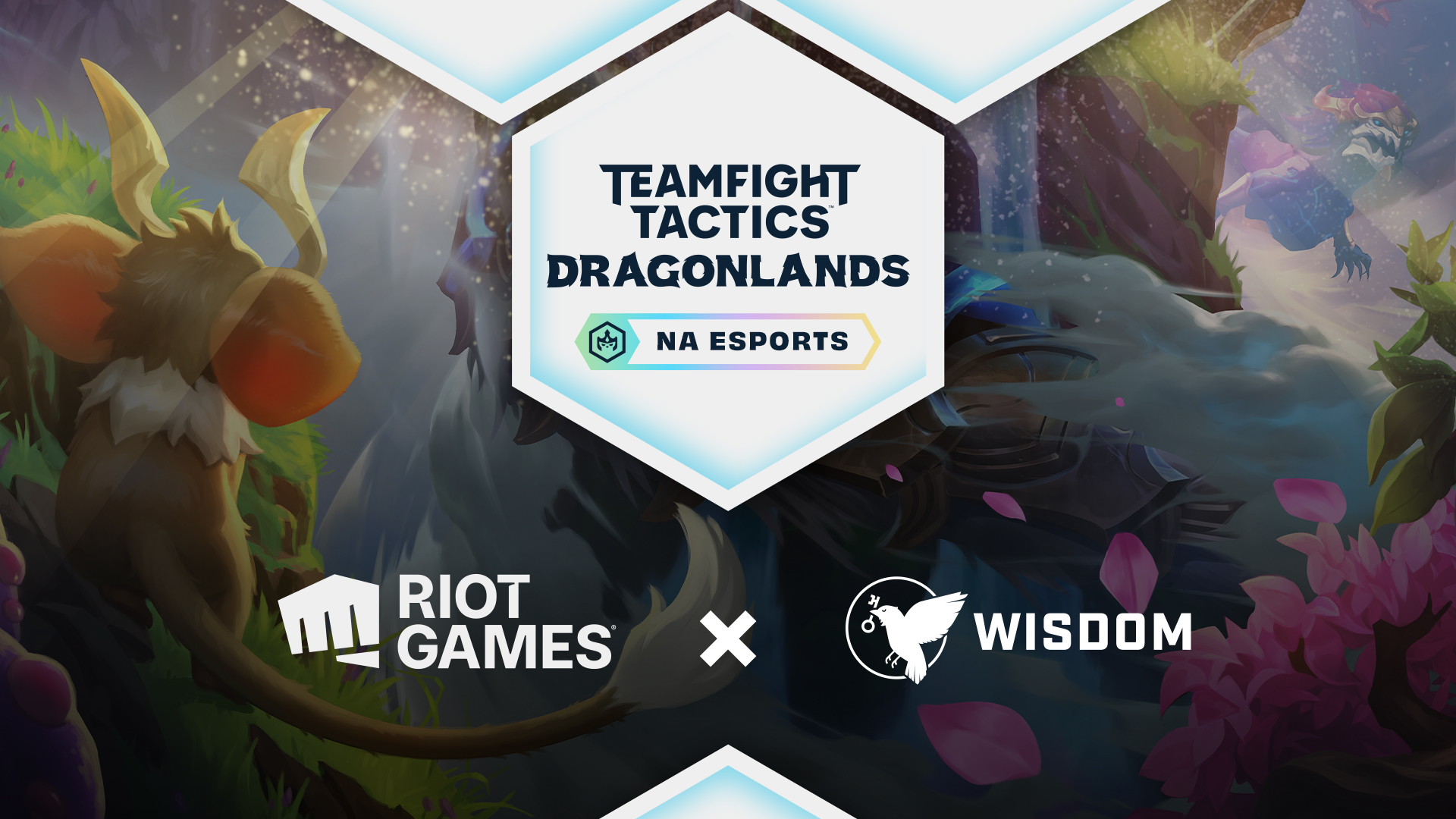 NA TFT esports is once again partnering with Wisdom / Giant Slayer, this time for our TFT Dragonlands series!

The North American TFT esports team is excited to announce that we’re continuing our partnership with Wisdom Gaming for TFT Dragonlands! Wisdom will handle all broadcast production and tournament organization as we journey through a magical set of dragons to crown the best TFT players in North America.

Wisdom has already updated riot.com/natftesports for the new set—head there throughout Dragonlands for info on format updates, upcoming events, standings, rules, and official ladder snapshots. 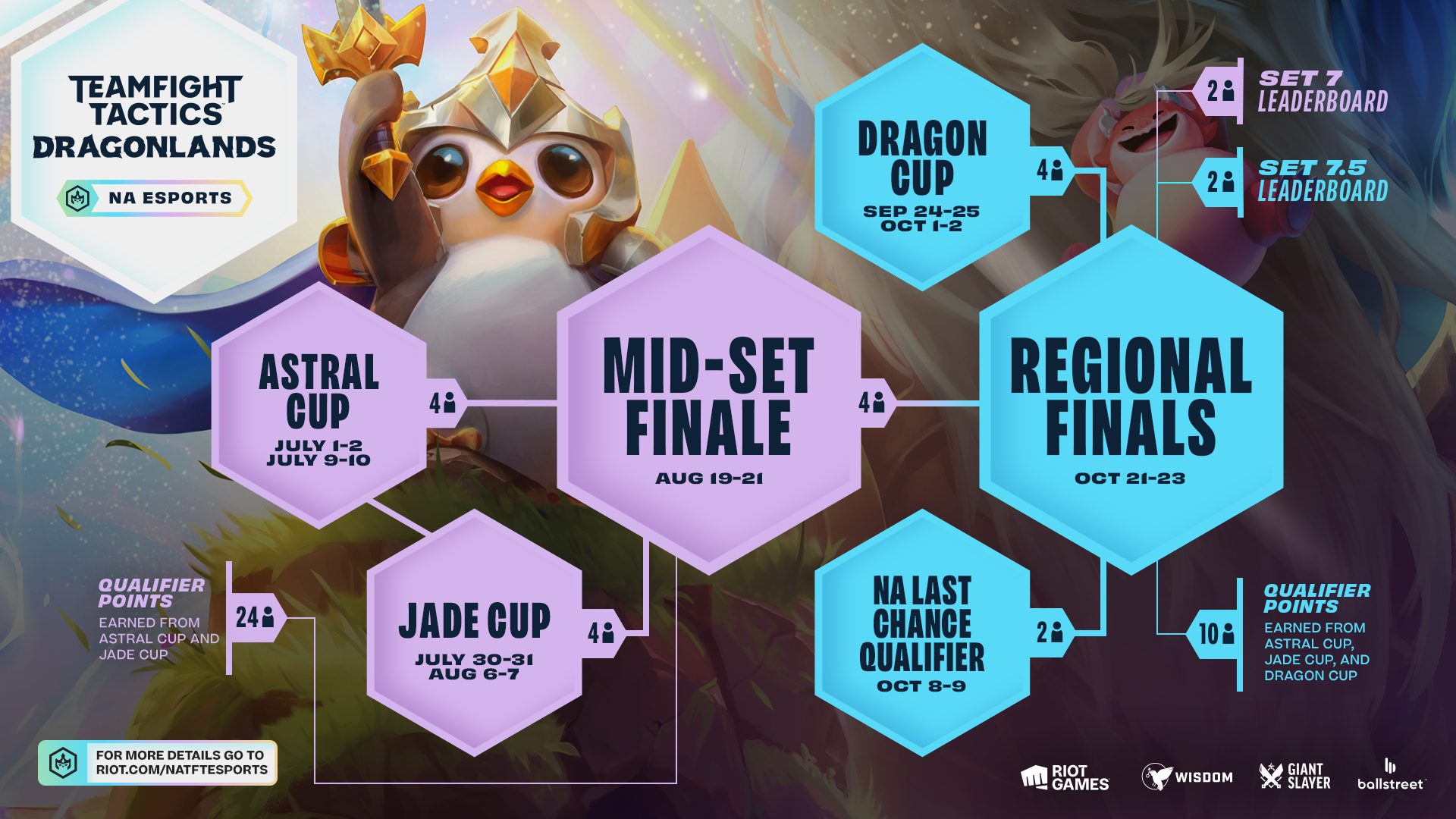 FantasyTFT is also back for the NA Dragonlands competitive series. They provide a free fantasy trading market where you can buy and sell shares of your favorite TFT players during live tournaments. It’s all free, and you get to compete against other viewers for prizes!

Our events throughout the summer and fall will qualify the best NA representatives for the Dragonlands World Championship. Keep reading for an overview of upcoming events and format updates, while full details can be found at riot.com/natftesports.

Our first two Cups will kick off the competitive scene in July and August. Each Cup will be a four-day, two-weekend event with the top 160 ranked sign-ups receiving an invite.

128 of the 160 players will participate in play-ins on Days 1 and 2. The top 32 sign-ups will automatically qualify for Day 3 where they’ll be joined by the remaining 32 players from play-ins.

The top 4 players from each Cup will qualify for the Dragonlands Mid-Set Finale. Every participating player will also have the chance to earn Qualifier Points based on their final placement.

This event will feature the top 4 players from both the Astral Cup and the Jade Cup, and the top 24 players from Qualifier Points. Players will test their TFT might over three days of gameplay.

The Dragon Cup is our first competitive event in North America after the mid-set update. It will follow the same format as the Astral Cup and Jade Cup—two days of play-ins followed by semifinals & finals the next weekend.

The top 4 players from the Dragon Cup will qualify directly for the Dragonlands NA Regional Finals. Players will also receive Qualifier Points based on their final placement.

The North American Last Chance Qualifier is replacing the Challenger Series seen in previous competitive sets. It will give invited players one last shot at qualifying for the Dragonlands NA Regional Finals.

Invites will be extended to the top 16 player sign-ups based on a leaderboard snapshot. The top 2 players from this event will qualify for the NA Regional Finals.

Our final Dragonlands event will determine who represents North America at the Dragonlands World Championship!

The total number of NA players who will qualify for the Dragonlands World Championship or the Western Last Chance Qualifier will be announced at a later date. We’re excited to bring back a World Championship spot for the player with the highest average placement across the entire event.

Qualifier points are making a return for Dragonlands competitive events. Players can earn Qualifier Points from all three Cups, with increasing point values in later tournaments.

Visit our Qualifier Points page to see the point values for each Cup and the current player standings.

We’re happy to announce an exciting addition to the competitive system that rewards exceptional player performance during events: Bonus Points!

Doing well on certain days of competition will award bonus points for the next day of competition. Every event leading up to the Dragonlands NA Regional Finals will incorporate Bonus Points.

Finally, leaderboard snapshots are returning to reward players who consistently maintain a high rank on the TFT leaderboard.

Snapshots will be taken weekly on Wednesdays at 12:01 AM PDT from June 22 to August 17, and from September 14 to September 28. To be eligible, players must have at least 10 ranked games on the same account each week a snapshot is taken.

And that’s it for our Dragonlands competitive overview for North America. Make sure you bookmark riot.com/natftesports and follow TFT and Giant Slayer on social media, where we’ll be sharing future info on upcoming Dragonlands events, standings, rules, and official leaderboard snapshots. We’ll see you when we kick things off with the Astral Cup in July!