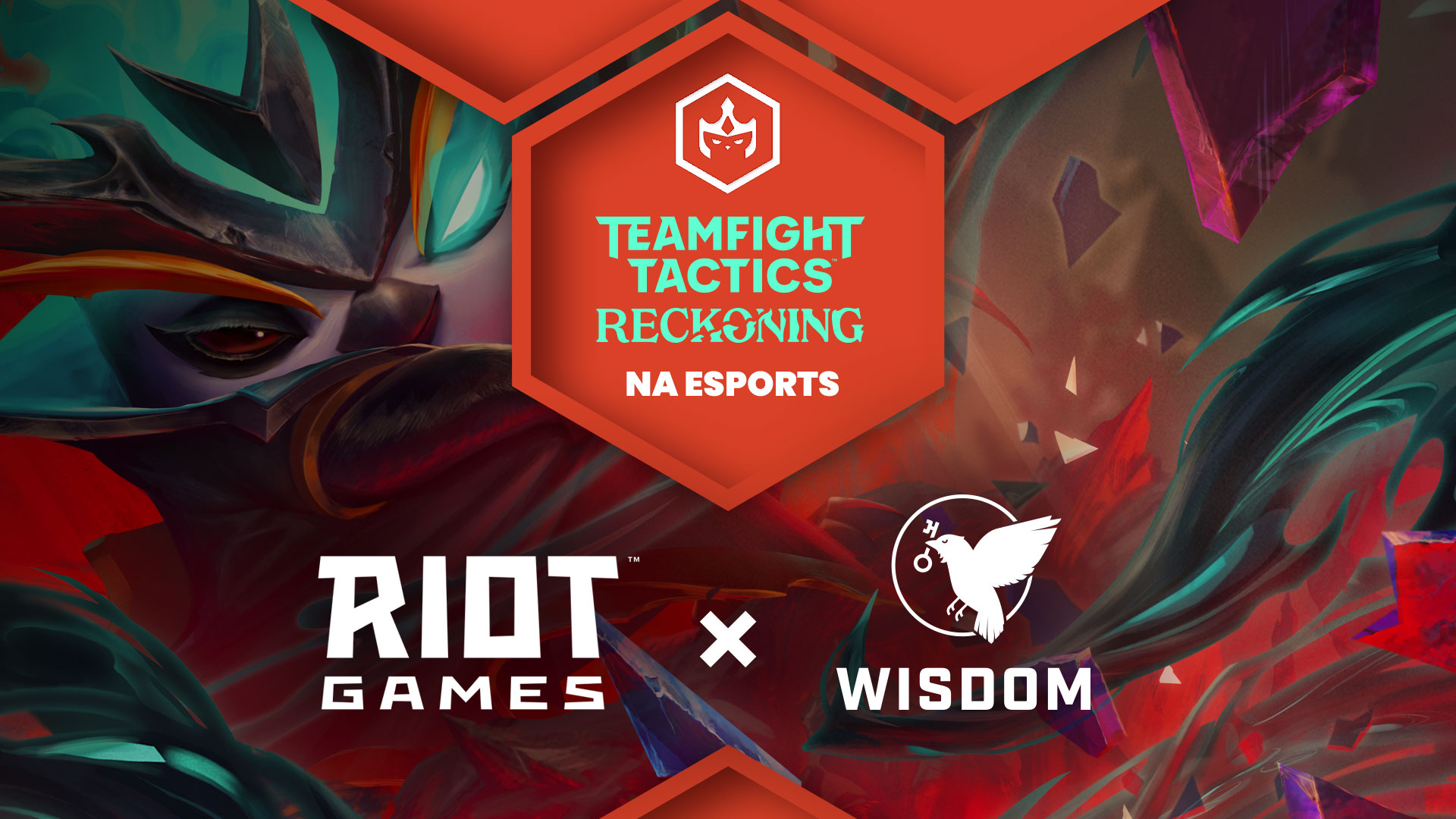 NA TFT esports is once again partnering with Wisdom / Giant Slayer, this time for our TFT Reckoning series!

The North American TFT esports team is happy to announce that we’re once again partnering with Wisdom / Giant Slayer, this time for TFT Reckoning NA esports!

We’re planning for this series to be better than ever, starting with an all-new hub hosted by Wisdom at riot.com/natftesports, which will house the official ladder snapshots for NA as well as information on all upcoming official events in the region.

As usual, atop this set’s NA events will sit the NA Regional Finals, which will qualify multiple NA players for the Reckoning World Championship. For the first time, the World Championship will be a live, in person event! Stay tuned for more Worlds info later in the set, but click or read below for more detail on the multiple routes leading to the NA Regional Finals. 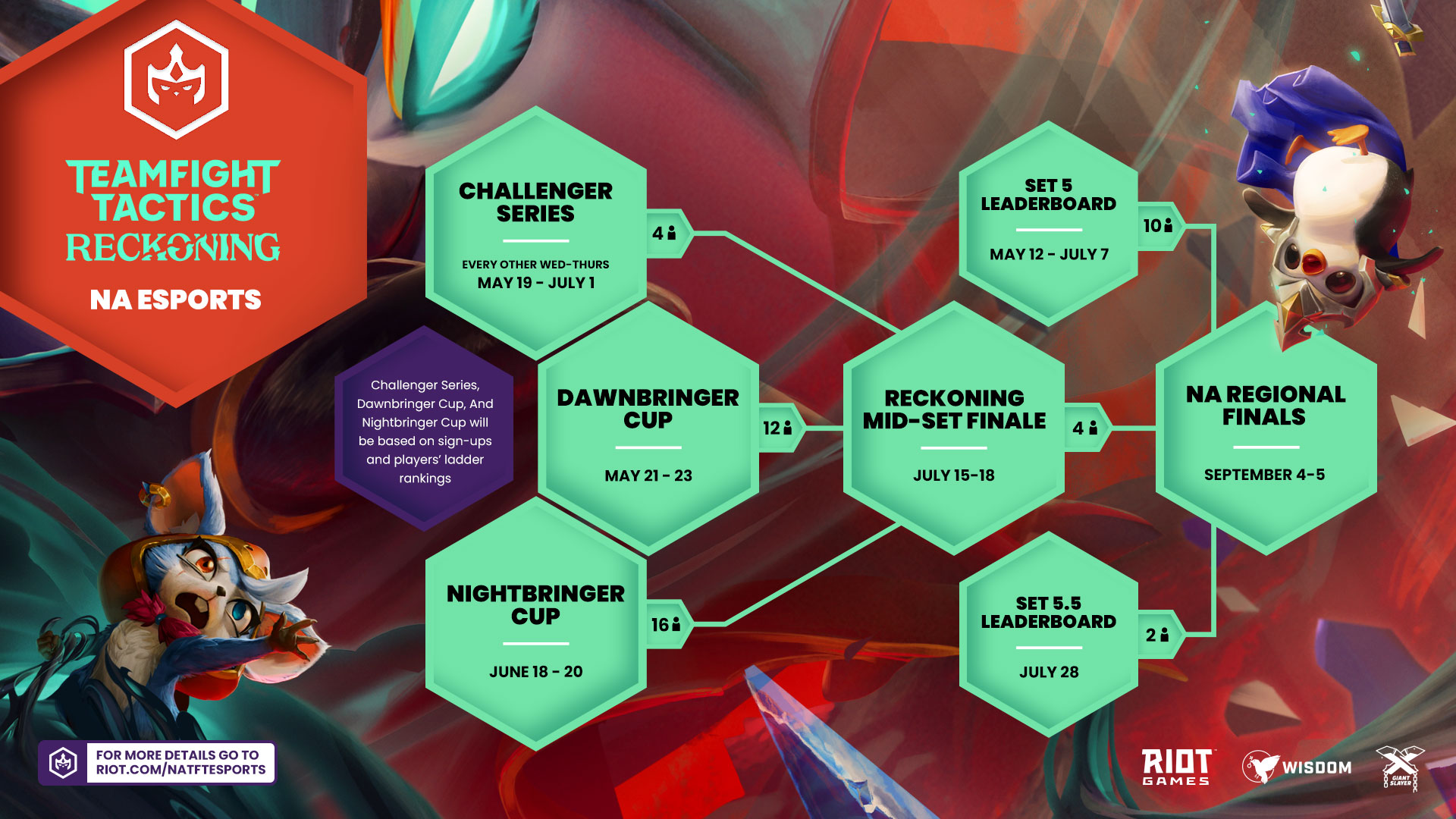 Ladder snapshots are back and will be taken weekly on Wednesdays, starting May 12th at 12:01AM PDT, and points will accumulate throughout the Set as one method of qualification to the NA Regional Finals. Generally the rules are the same as those from the last set, but we’ll be dropping every player’s lowest week to help out competitors who suffer a rough patch. Twelve players will qualify from leaderboards running until shortly after the Reckoning mid-set update, and advance to the NA Regional Finals.

Giant Slayer’s Challenger Series returns with an upgrade as the first tournament this set, taking place on May 19-20 and recurring on a bi-weekly schedule until June 30-July 1. Now featuring 16 players for each two-day tournament, the winner of each event will advance to the Reckoning Mid-Set Finale. Sign-ups for the Challenger Series will be based off of the last ladder snapshot taken previously.

The Dawnbringer Cup is a new tournament featuring 128 players and taking place May 21-23. Players will be chosen based off of their in-game ladder ranks at the time sign-ups close on May 15. The top 12 players will advance to the Reckoning Mid-Set finale; players placing 13-16th will receive priority seeding into the Nightbringer Cup.

We can’t have a Dawnbringer Cup without a Nightbringer Cup! This tournament will feature a very similar format to the Dawnbringer cup and will take place June 18-20. The top 16 players will advance to the Reckoning Mid-Set Finale.

The Reckoning Mid-Set Finale will take place July 15-18 and showcase the best 32 tournament players from our earlier Reckoning events. All players will be competing for a prize pool of $20,000, and the top four placing competitors will advance to the NA Regional Finals.

New for our Reckoning series of events, we’re partnering with BallStreet Trading to create free peer-to-peer prediction contests that will allow TFT fans to compete against each other during live TFT NA esports events. Fans will be able to buy and sell shares (for free) of their favorite players as they watch tournaments live. Rather than classic fantasy sports, this is a real-time market where fans can predict different outcomes and change their mind at any time. BallStreet creates a second screen experience for fans to win exclusive prizes while watching TFT events. Look for more info closer to the first events.

Be sure to follow the official TFT and Giant Slayer TFT social media channels for more information as Reckoning unfolds and we gear up for the most competitive set yet for Teamfight Tactics in North America!