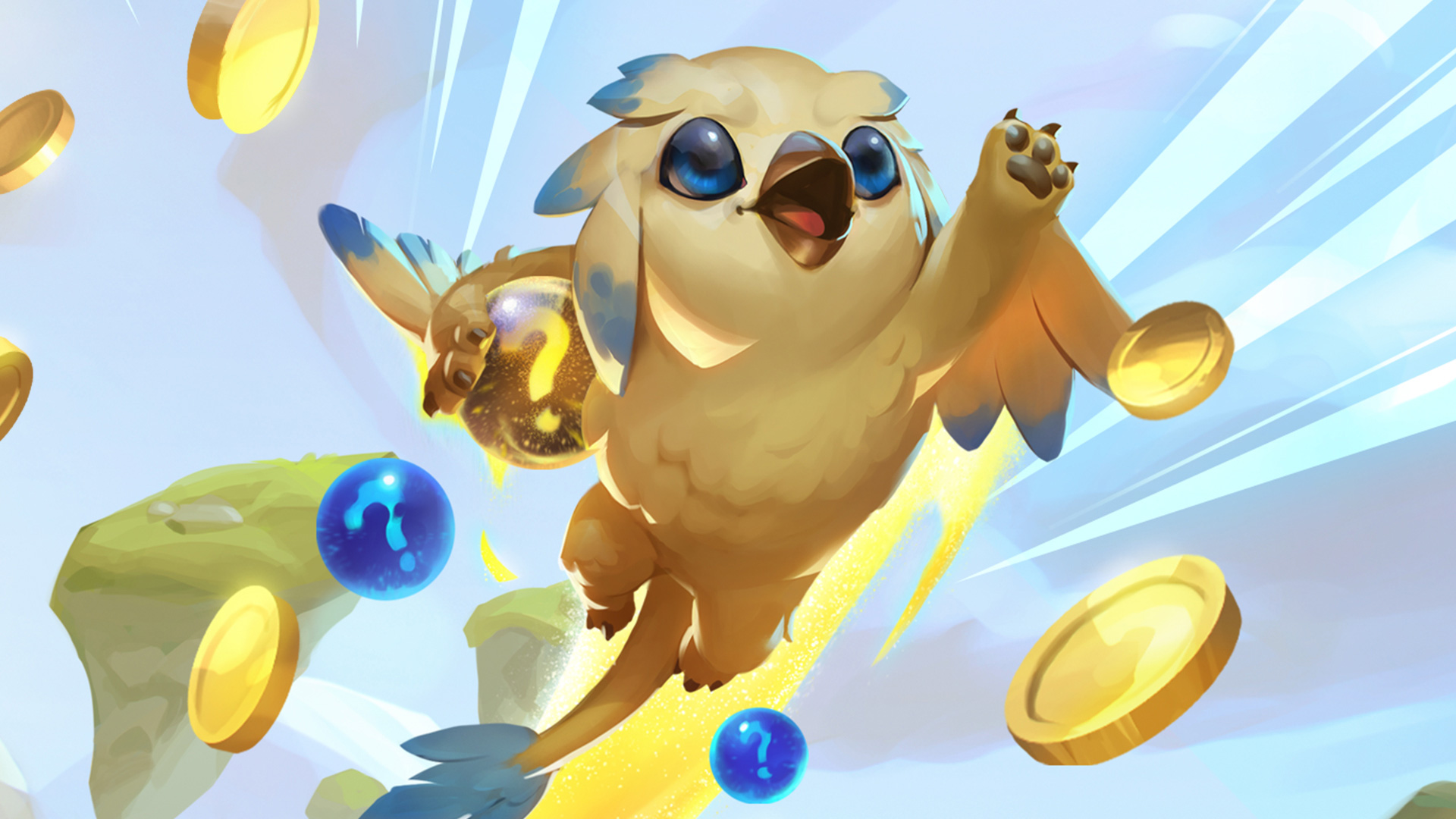 GET HYPED for Hyper Roll!

Hyper Roll is the new way to play Teamfight Tactics! It’s a shorter, slimmer version of the standard TFT you know and love. You will almost certainly finish a game of Hyper Roll in 20 minutes (or sooner… even a lot sooner).

Hyper Roll features a simpler economy that allows you to focus on fielding the very best team you can, and re-rolling your shop to do it. You'll want to focus on keeping your board as strong as possible at every stage. Losing rounds, especially in the late game, will get you eliminated—fast. So while standard TFT asks for patience and precision, Hyper Roll demands a few good presses of that sweet sweet re-roll button… usually.

There’s no bad time to play Hyper Roll. Maybe you’ve got some time to kill and don’t want to commit to a standard game, or maybe you just want to focus on learning the champions and traits without having to worry about managing your gold. Or maybe you’re looking to reach the top of the Hyper Roll ratings — Hyper Tier. Hyper Roll has a little something for everyone, and here's how it works: 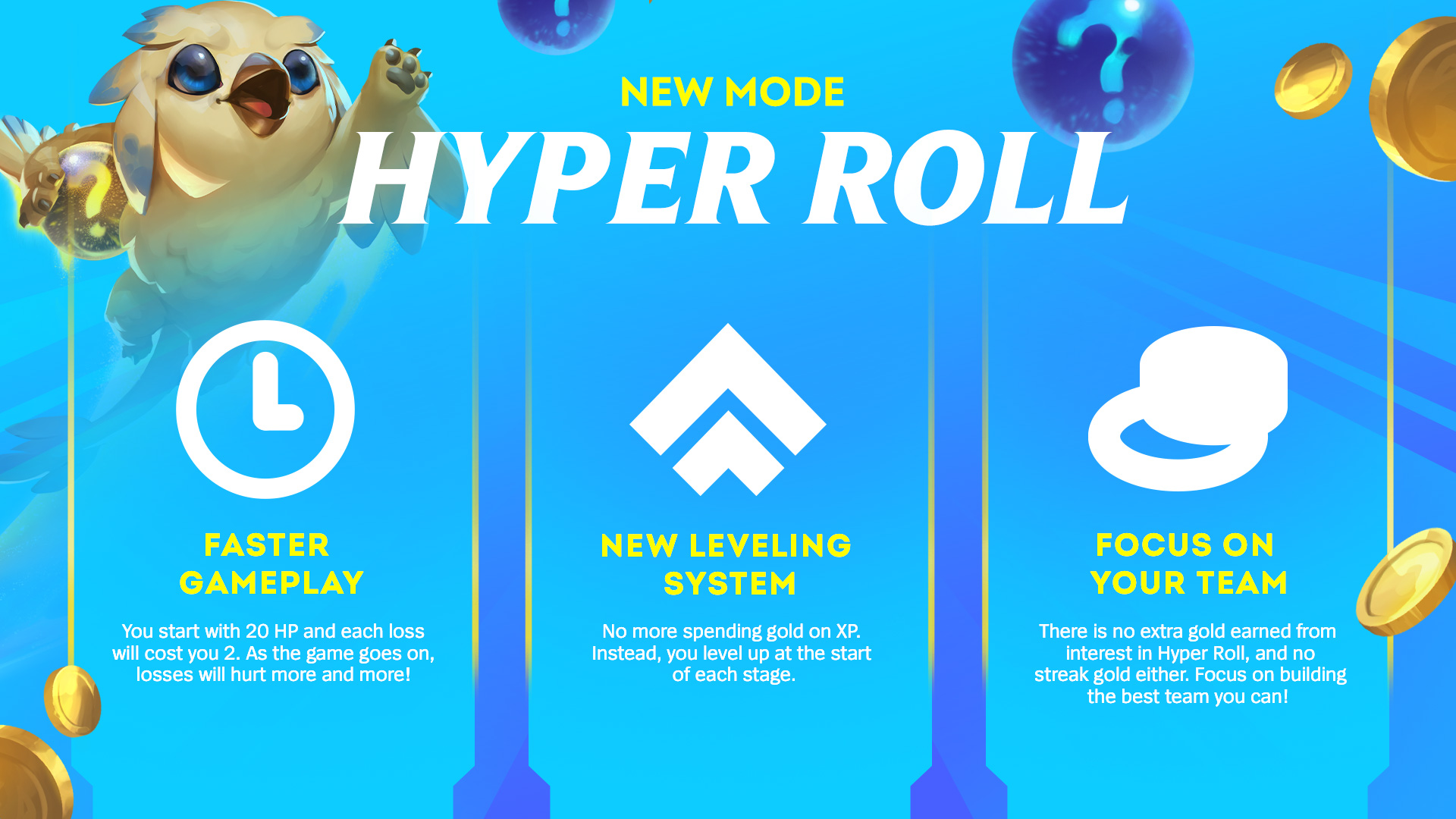 TFT: Hyper Roll has a lot in common with standard TFT, but it specifically challenges your champion choices and teambuilding thanks to a few rule tweaks. Here are the new rules for Hyper Roll:

Drafting and Round Structure

When you play Hyper Roll, you’ll get a rating that corresponds to your team-building and rerolling skill. Everyone starts in the Gray tier, but you'll progress through Green, Blue, and Purple tiers on your way to the pinnacle of Hyper Roll: Hyper Tier! We’re a bit more chill in Hyper Roll than in a standard Riot Ranked system: you’ll get Ranked rewards based on the highest rating you achieve each stage (starting at Blue Tier) — even if you later take a plunge. No need to worry about whether a bad streak will push you out of rewards contention. Last but not least, Hyper Roll will have its own rewards, separate from standard TFT!

In addition to standard TFT, you’ll be able to complete missions for your Reckoning Pass in Hyper Roll for full XP, so it can be a fast way to get a chunk of progress! That said, you’ll only get 50 baseline XP for each Hyper Roll match you play.

We’re going to take an active approach to balance in Hyper Roll just like we do in standard TFT. We have some theories about how this is going to go… and you’re probably going to burn all of those theories to the ground. It’s possible that Hyper Roll will need significant tuning to keep TFT’s fun and varied gameplay intact, so we’re going to be keeping a close eye on that as players experience the beginning of Hyper Roll!

The Same… but Different

Hyper Roll’s pace and rules mean we have to make some tweaks to how some traits and champions work. We’ll always make them work as similarly to their standard counterparts as possible; but, for example, Teemo can’t cost 6 Health in Hyper Roll — that’d be over a quarter of your starting Health! Even Teemo isn’t powerful enough to warrant THAT. So, in Hyper Roll, he only costs 1 Health. Similarly, any trait that changes according to rounds will need adjustments to ensure it makes sense in Hyper Roll.