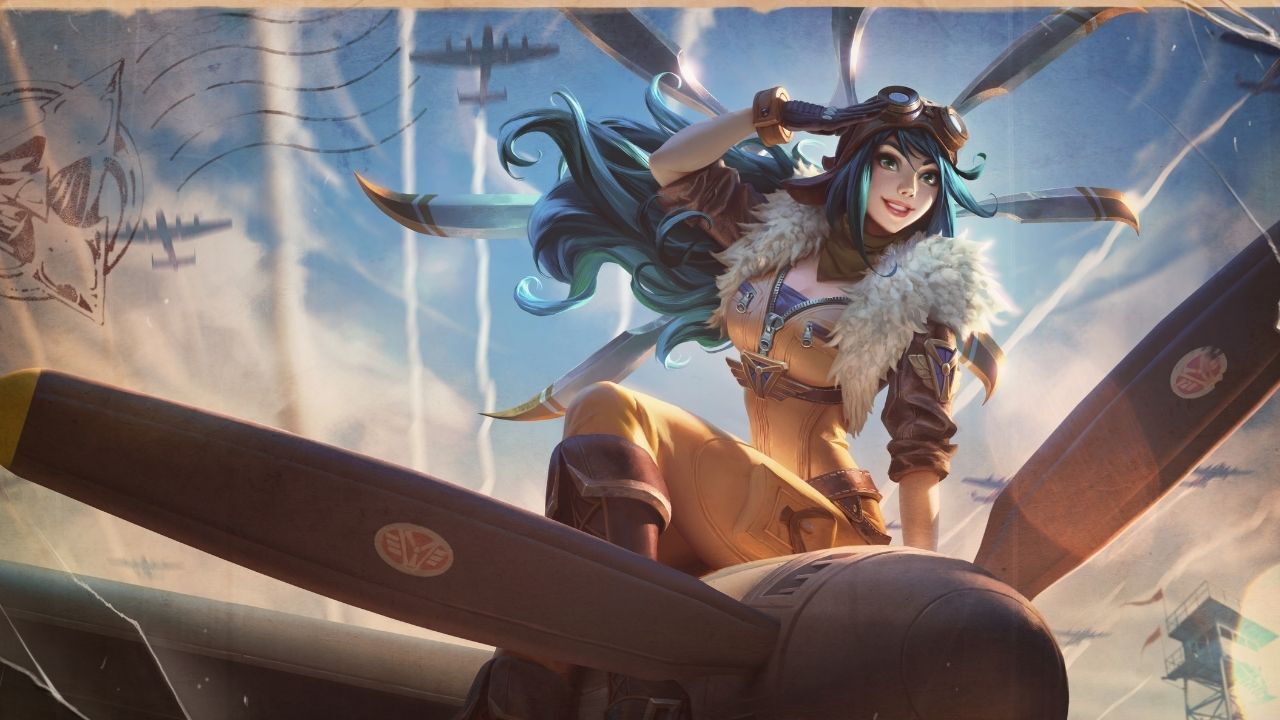 Did ya miss us during the long patch? Well we missed you, which is why we shipped two three different mid-week updates during patch 12.5! Refresh your memory on those here. As for this patch, we’ve made changes to Augments, just about every AD unit, and, well, just keep reading for that third, fourth, fifth thing and beyond!

You’ll now get more points towards missions that get you closer to unlocking those coveted eggs, orbs, Mythic essence, or any Anima Squad reward your heart desires. This has been effective for the entire Anima Squad Pass, but we’re just adding it to the patch notes now!

We’re doing a sweep of nerfs this mid-week update to address the dominance of the Recurve Bow (attack speed) meta (Talon, Warwick, Sivir, and Twitch) as well as some other overperformers. Much of this meta shift is a result of our extensive nerfs to AD that we’re simply cleaning up with a B-patch ahead of patch 12.7, the same patch Worlds will be played on. Many of the nerfs to particular comps are spread across individual champions and traits.

More context for the Lucian and Sivir nerfs in the next section.

Arcanist Lucian is a creative build sweeping the meta seemingly out of nowhere. With tons of ability power for Lucian, Malzahar to reduce MR, Brand to CC, and Vex to stall, you don’t even need Lucian 3 to find success with this comp—well, maybe now you will.

As the best user of the Hextech on-hit damage, our Hextech nerf not only targets the overperforming trait, but also Sivir, who we nerfed lightly above. But Hextech is overperforming, especially when considering how easy it is to scale hard into the late game.

We’ve got a number of bugs being solved for Mercenary, the most critical being a Double Up exclusive issue. 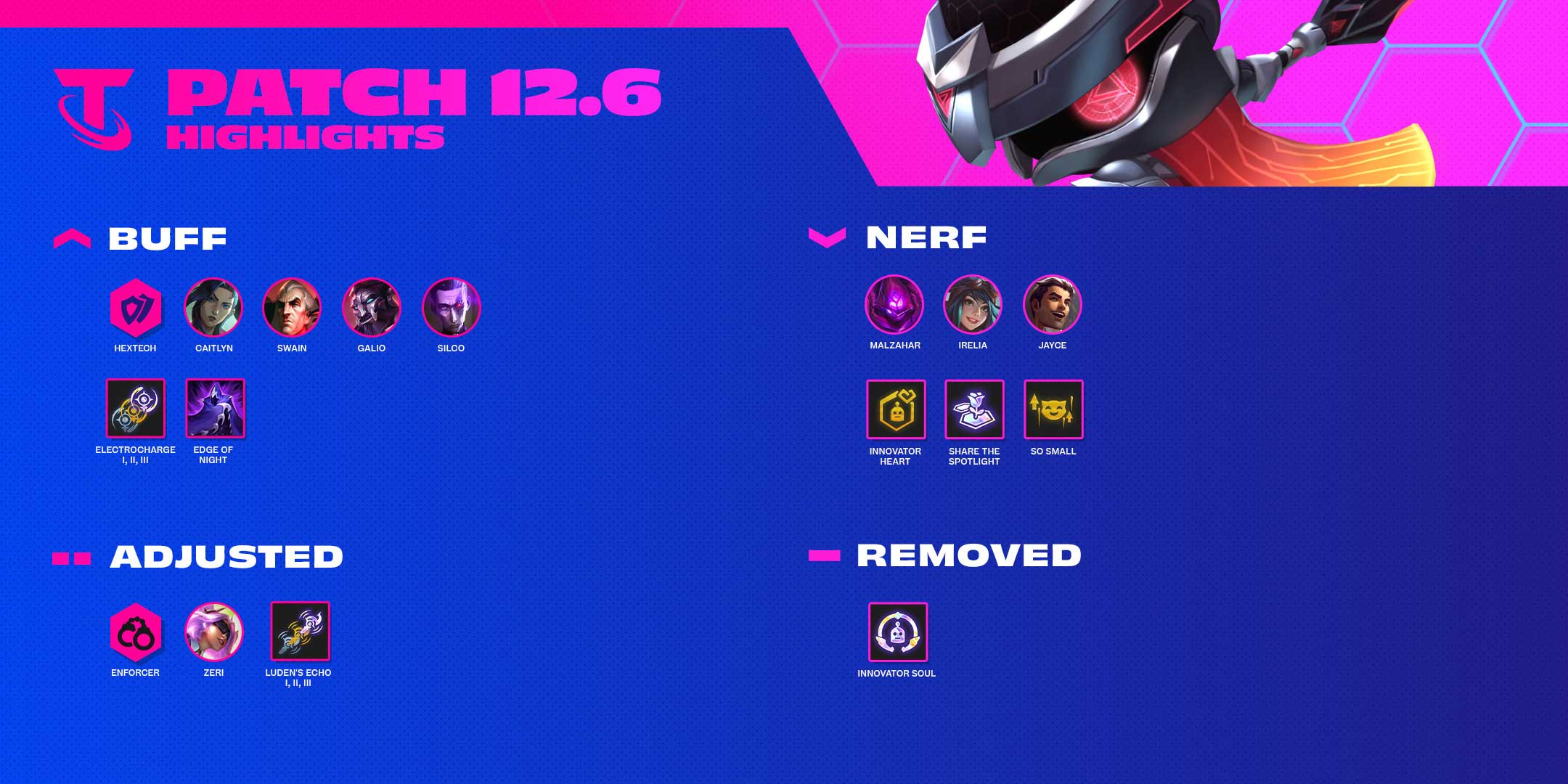 New hotkeys added for combat recap control on PC. Below are the defaults, but you can customize the hotkeys to whatever you want in the settings menu if the default isn’t good enough for you…

Large, like the mid-week update we shipped in patch 12.5 that you can catch up on here.

In addition to general balancing, we’ve got rule changes to Augments for more diverse playstyle options, as well as stage scaling to prevent combat Augments from being too powerful in early game, and too weak late game. The time to choose Augments has been slightly reduced to allow Augments like Recombobulator time to process before the next combat.

Innovator 7 is a super powerful chase trait that's fun and satisfying to hit, but it's balanced around playing some lower-cost units to hit the trait breakpoint, and hitting a 5-cost to turn it on. Innovator Soul breaks that balance by allowing players to both play multiple strong end-game units with the Dragon, and by allowing access to the Dragon early, making it by far the strongest Augment in the game. Instead of reducing its power, and therefore the fun and satisfaction of the Innovator trait, we decided to cut the Augment that's causing the most problems with balancing.

Perhaps the most confusing large change is our Yordle Augment change, because it’s So Small. Okay, I’ll see myself out. So Small has been tricky to balance as a Silver Augment, as it’s outperformed the rest of the trait-linked Augments so consistently that it may be impacting the overall strength of the trait itself. We don’t want to continue nerfing the Augment until it feels like it has no impact, so instead we’re buffing it and moving it up a tier, which overall is a power nerf, but importantly not a vibe nerf.

With Sejuani and Vi making Enforcer a free add for many compositions, we’re adjusting the trait to make it something you have to deliberately opt for while also addressing the unhealthy ‘my units don’t do unit things’ power of the trait.

Our Hextech adjustments address the trait’s current weaknesses (scaling), while leaning further into the high-tech, high-velocity,and high-energy thematic of the trait—but remember, all these highs are dependent on the power of Hextech (Augments)! The changes amplify the base values of the shield and magic damage the Hextech trait grants. Each Augment in your Hexcore will strengthen the value the trait gives by an additional 20 percent! For example, Hextech 8 shields for 400 Health now, but with 1/2/3 Augment(s) that’ll be 480/560/640.

In order to balance this, we’re drastically reducing the values to allow each additional Augment to meaningfully increase the trait’s power. There’s a lot of math in this change, so I’ll break down the power differences here: At the 2/4/6 trait breakpoints, the changes are close to neutral in power at one Augment, a small buff at two Augments, and a rather large buff with three Augments. For the prismatic trait breakpoint, at 8 Hextech, this is neutral at two Augments and a small buff at three Augments.

We’re currently seeing attack damage too high across the board, making champions that rely on star scaling and AD scaling spells do more damage than we think is healthy for the game. So we’re lowering the base AD of MANY champions.

Challenger reroll compositions have been showing their claws (talons) to great success, especially when you can reroll two for 2-cost carries.

Even raven demons can use a helping hand.

Our favorite purple voidling dad is actually pretty balanced, except when he’s combined with Synaptic Mutant. With this change, we’re trying to nerf Malzy with that Mutant variation, while compensating base Malzahar to keep him relatively power neutral.

Irelia casts too consistently, even when she’s not chaining together resets from last hits with her ability. With this adjustment, she’ll still have the potential to 1v9, but it will take her a bit longer to recast if she doesn’t get the reset, and that reset will be a bit harder to obtain. It’s worth noting that we did give Irelia a small buff-fix by allowing her to gain mana while crowd controlled in our mid-week update for patch 12.5 last week.

Recall that we also nerfed Irelia’s Attack Damage alongside other AD based champions *cough Sivir* in the previous section.

We’re shifting power from Galio's base spell damage into his max health scaling to open up more unique builds—like stacking Warmog’s for example. This change and the stun duration buff should help Galio’s struggling 1-star version more than anything else.

The golden boy (Jayce) may be gold in melee form, but his ranged form has emerged as Platinum quality—and that’s more Viktor’s vibe.

Power, real power, should come to those who will do anything to achieve it, and starring up any 5-cost unit is quite a lot to achieve. We’re making the investment worth it by adding an increased buff duration and something truly scary if you manage to 3-star Silco.

Finally, adding a bugfix into this section because we feel that it will greatly impact gameplay and help Zeri pop off—no cap. Of course, now that Zeri is uncapped, we’re preemptively shipping a compensation nerf to prevent Zeri the scary carry from being too unfair…y.

On release, we prevented units stealthed via Edge of Night from attacking or casting abilities to avoid the negative experience of being hit by an enemy that cannot be hit. But this negative experience is not the same situation for Edge of Night as it was with Guardian Angel, as the moment of stealth is brief while being highly visible. And since the item needs a buff, you could say that the stars have aligned for this Night.

Small, like your Yordles when you get So Small!

We’re continuing to use the balance lever of additional gold alongside standard number changes to tighten to the power of each Augment.

We’re hitting Innovator a lot in a couple different ways. The Innovator 3 opener continues to be one of the strongest early game boards. From there, it’s too easy to hit 5 Innovator and cash in on the powerful Bear while also being able to flex between multiple carries. We’re leaving the Dragon as a powerful chase reward, but with our Augment changes (look at large changes) we are making that chase reward harder to obtain.

You don’t need a map to find Ezreal over performing as a 1-cost.

One wants to be left alone, the other wants to bring people together. They’re destined to be enemies, sadge.

Currently, the cost of open forting (intentionally loss streaking) is lower than it should be in Double Up. When there are players open forting in a lobby, it creates feelsbad moments for others in the lobby who have to face two combined full strength teams (because one of them rolled over an open forter). Delaying reinforcements, and ensuring damage doesn't leak out of the system via rounding (next section), will make open forting less distorting on the game as a whole.

Previously when players took damage, we would take the amount of damage, divide it in half, round down, and throw away the remainder. We now keep track of the remainder damage, and apply it on the next loss if it adds up to a whole point of damage. Don’t worry, avoiding that extra point or two of damage is easy—don’t lose.

Mercenary can give a team full loss-streak credit with only one member of the pair (the Mercenary player) taking losses. This effectively cuts the Health cost of loss-streaking with Mercenary in half, which makes Mercenary too powerful in the hands of experienced and coordinated pairs.