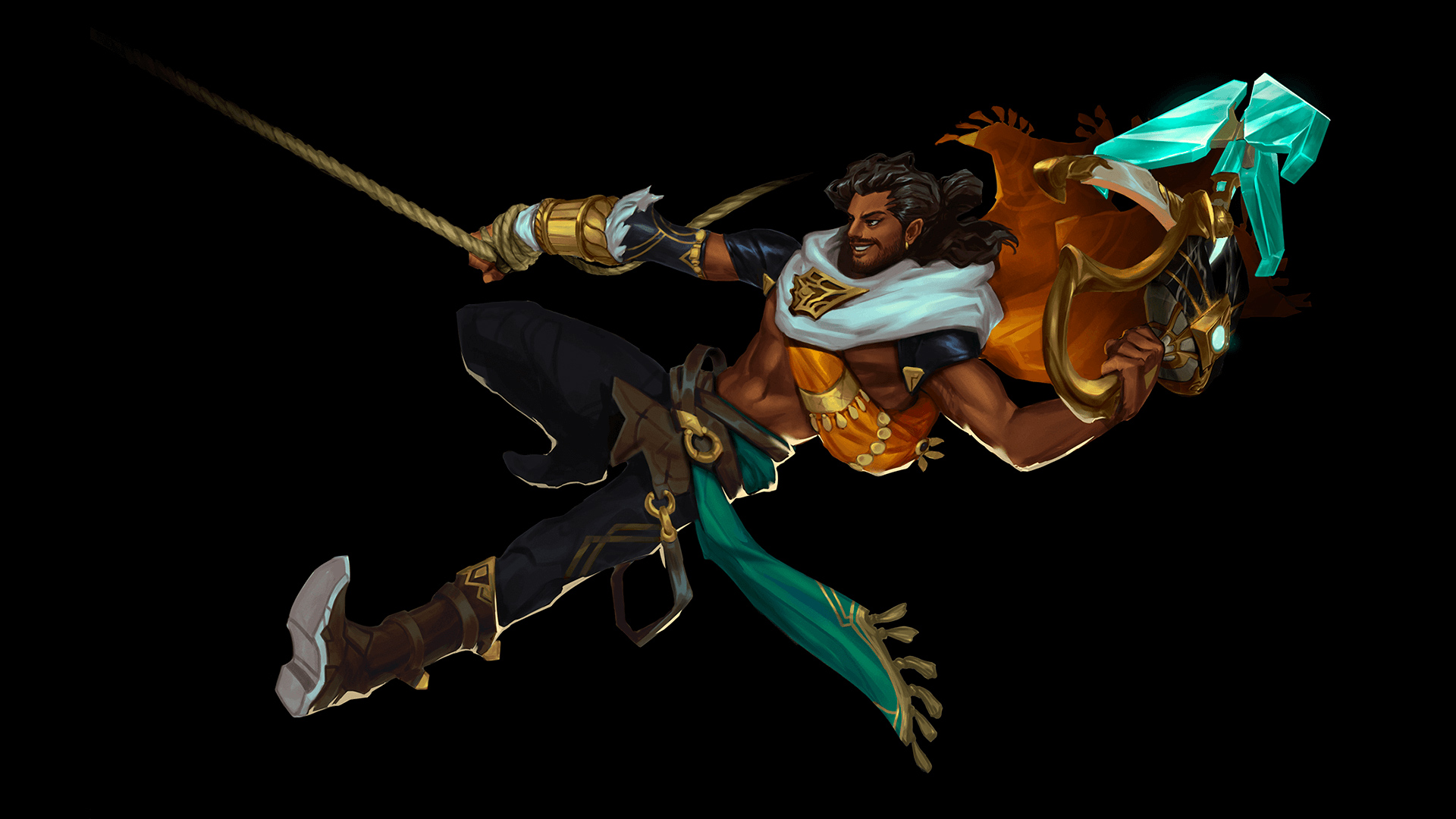 A hero among scoundrels.

Akshan’s got a lot going on. He’s a Sentinel of Light who swings into battle wielding an ancient weapon of tremendous power. He’s a man who believes in doing the right thing, no matter the cost. And he’s got a nice smile to boot.

Oh, did we mention he’s a midlane marksman with a grappling gun, stealth, and a revive? Don’t worry, we’ll get to that later.

A New Kind of Assassin

Before we get lost in his dreamy eyes, let’s start with his origins. Akshan’s gameplay development goal was to create a roguish assassin. Someone who fits the “let’s-make-this-Lux-playing-fool’s-life-miserable” playstyle. Someone sneaky. 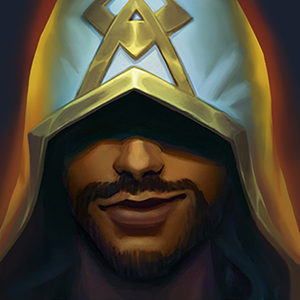 One of the things that make assassins effective is their ability to attack you before you can strike back. In League, that looks like untargetability in the form of Akali’s shroud, crowd control like Pyke’s stun, and invisibility like Talon’s ult. They’re all slippery, and they all promote guerrilla-style attacks where you burst down an enemy before disappearing into nothingness. Since the team was making a roguish assassin kit, stealth seemed like the obvious choice. But stealth isn’t exactly a new concept for a League assassin, so our next question was, “How do we make him feel different?”

The answer came not from thinking about game design, but from watching players define the meta.

“We’ve been watching marksmen go mid in pro and regular play for a while, but none of them feel like they belong there,” recalls game design lead Jeevun “Jag” Sidhu. “They don’t provide the things that champs designed for mid should, like crowd control or target access. So we wanted to craft an experience that would feel like a distinct assassin style, but also clearly feel like a marksman... and put those two worlds together in mid lane.” 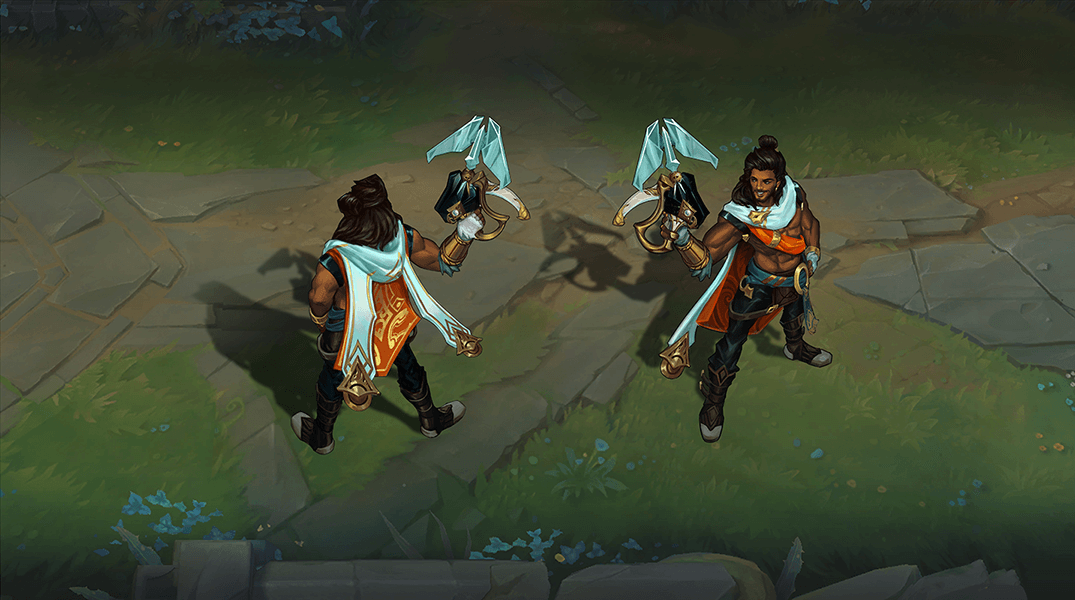 Positioning is an incredibly important part of playing both assassins and marksmen. As an assassin, you want to flank and annihilate squishy carries, not awkwardly poke beefcake frontliners with an inflatable dagger. And as a marksman, you are the squishy carry with a big target on your back, so one wrong misstep can mean insta-death. Akshan is both of these things, so the team wanted to give him more control over his positioning in fights. That line of thinking led the team to some high-flying, super cool, suave gameplay.

“I wanted to represent some part of South Asian culture in Akshan, as that’s something I grew up with—my mom would watch a ton of Bollywood movies when we were young. And one signature element of Bollywood movies is that they’re dramatic, with over-the-top action style that’s all about spectacle and fun,” Jag says. “League’s signature movement spells are often the coolest part of the game, and I have a light design goal to try to make a unique movement style for each champ I work on. Akshan’s original narrative writer David “Interlocutioner” Slagle and I talked about ropes as a power source for a long time at the start of the process—we talked about things like tripwires and traps. Those didn’t work but a grappling hook sure did.”

And while all this was happening, the team also needed to think about the man behind the moves. What kind of person is Akshan? Why would he use stealth and a grappling hook to fight enemies head-on? And how did he get this way?

Rules Are Meant to Be Broken

When you think about assassins, the champs who come to mind are a lot of xXshad0wslayrXx 2edgy4me assassins, a very friendly succubus, a demonic clown, and a stupid fish thing. But none of that really felt right for Akshan. He swings into combat on a grappling hook, for pete’s sake. Certainly he should be more... cool.

“As we started to really flesh out Akshan’s gameplay, it became clear that he was very much a charming rogue,” says game designer Glenn “Riot Twin Enso” Anderson. “And what do charming rogues do? They break through a glass window on a grappling hook, do a parkour move, and then shoot the bad guys in the face. That personality just fits his gameplay so well! But he’s not cocky like Ezreal. He won’t boast about all of his good deeds for attention, he’ll quietly do them and maybe just throw a wink at you.”

Beyond being the kind of guy who’d make you weak in the knees, Akshan doesn’t play by the rules. He’s firmly a “f$%^ the establishment” kind of guy. Even if that establishment is the revered ancient order, the Sentinels of Light.

“We’d always intended for Akshan to become a member of the Sentinels,” shares senior concept artist Justin “Riot Earp” Albers. “But it was important that we capture his rule-breaking personality even when it came to the Sentinels. He has his own style of clothing—he’s not defined by anything other than who he is. Even his weapon, which is an ancient and extremely powerful Sentinel weapon, is something he has modified to fit the combat style he wants. It doesn’t matter that it’s revered and feared by other Sentinels—Akshan has MacGyvered it by slapping a grappling hook on.” 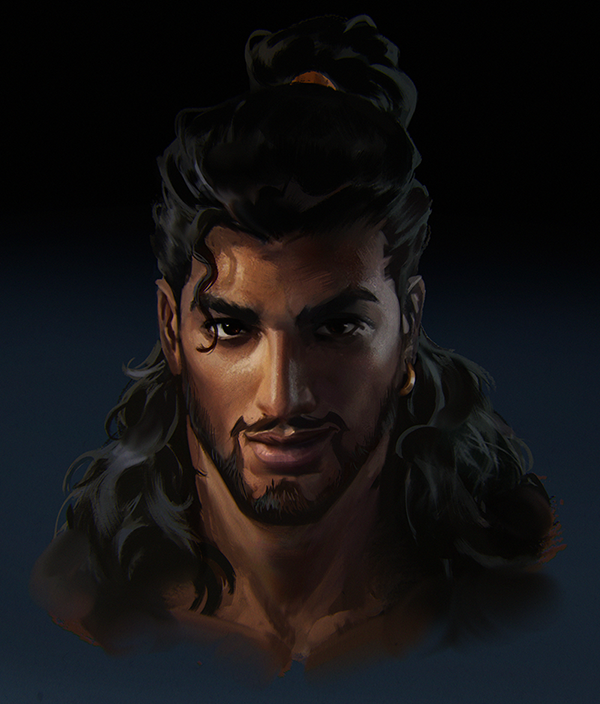 But no one’s as simple as that, and there’s pain behind that smolder. A lifetime of hardship. A loss so great it nearly broke the man he’d worked so hard to become.

Akshan grew up a street urchin in a Shuriman village. Even at a young age he struggled to turn a blind eye to the injustices around him, and would stand up to even the most frightening warlord if he viewed their actions as wrong. Until one day he pissed off the wrong man.

He was beaten and left to die in the street, and even succumbed to death’s sweet embrace. He was saved by a kind woman Shadya, who used a weapon both terrifying and powerful to resurrect the boy. She eventually became his mentor, training him to join the Sentinels and to put his convictions to good use.

Together the two traveled across Shurima to stockpile ancient Sentinel weapons. You know, to help against Viego’s eventual return and the final battle between good and evil, light and dark. The usual stuff. And then everything came to a crashing halt when Shadya was murdered. Akshan took the weapon that once saved him and forgot all of Shadya’s talk of stopping the oncoming Ruination. He wanted one thing and one thing only: vengeance.

“We had a hard time finding the right balance between revenge and hero,” says principal narrative writer John “JohnODyin” O’Bryan. “There were points during development where we made a slight adjustment to who he was, and he swayed too far into evil, and lost the good part about him. There was a span of time where he wasn’t the type of man you’d want to root for. I think he’s landed in a place that’s morally grey. He has strong morals and a good motivation, and that’s what keeps him from being the type of man he hunts.” 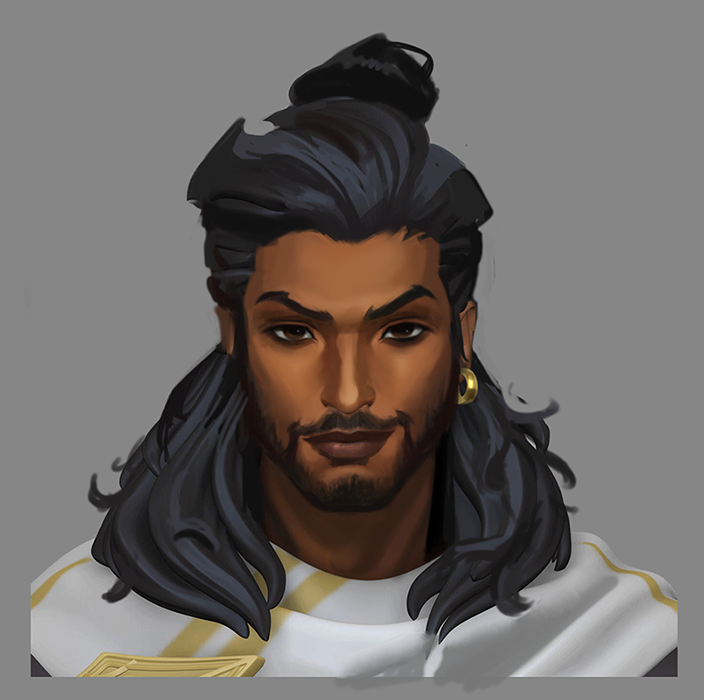 Finding a balance between spite and justice was key to finding Akshan’s personality, which is especially important when you consider who he could’ve easily become...

Two Men, Not a Shirt Between Them

Akshan and Viego are two sides to the same coin. They’re two men who’ve lost people they loved. Two men who are driven by the need to get them back. The thing that separates them is the choices they made throughout their lives.

Viego was a spoiled prince who viewed a woman as his. Akshan was a street kid beaten to death—literally—for standing up for what was right. Viego murdered thousands when he refused to put his grief and selfishness aside. Akshan trained as a Sentinel of Light to defend those who can’t defend themselves. Viego wants to destroy the world, and Akshan must save it.

This is all well and good, but League’s a MOBA, not a visual novel. So no matter how much goes into the differences and similarities between these two men, none of it matters unless it’s captured in game.

“When thinking about Akshan as a midlane marksman, I couldn’t help but think about how much I hate playing with them,” admits Jag. “Top lane, too! Either they kill their opponent at level two, snowball, and just carry the game and get all the credit... Or they fall behind and are totally nonfunctional. They don’t provide the CC a mage can, and they take longer to scale. Basically, solo lane marksmen can be terrible game experiences for teammates. I didn’t want that to be the case with Akshan. I love creating champions that remind players that working together is fun and has rewards... And it makes sense for who Akshan is as a person.”

Akshan has unparalleled target access—and that became an answer to a question that the team hadn’t asked yet: Who does he target?

The answer seems easy. Akshan goes after bad guys. Killers. Scoundrels. But there has to be a reward for hunting down individual people. A reward that expresses that he cares about his allies. What if he... brought them back to life? 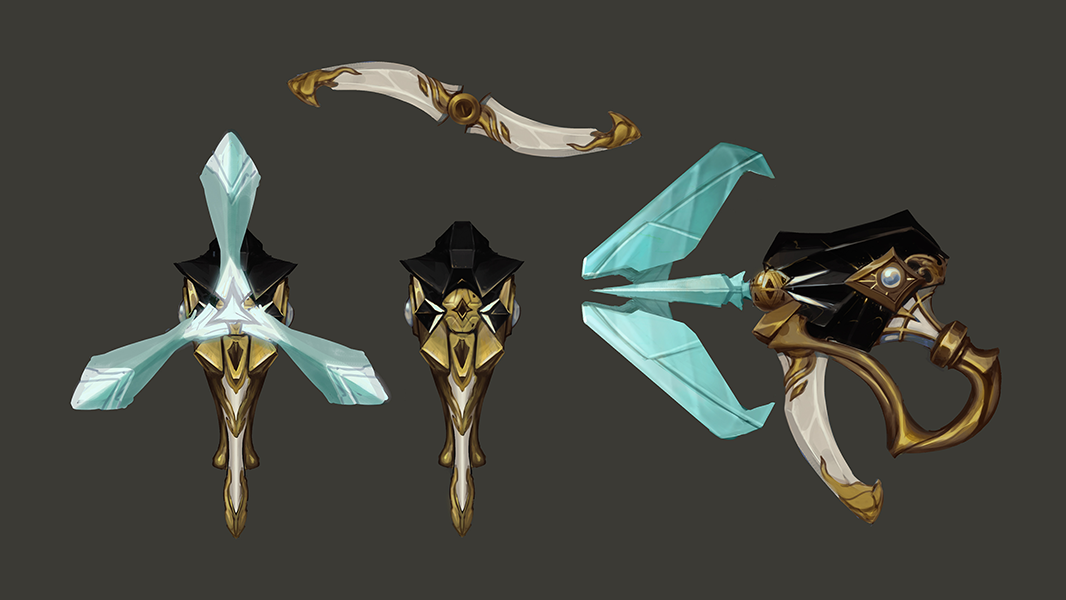 “A lot of Akshan’s power comes from his weapon... and the modifications he has made to it,” explains Riot Earp. “I kept his grappling hook and boomerang as part of his gun to simplify his read and prevent him from coming across as ‘gadget guy,’ but it also serves to show the importance of his weapon.”

Resurrection is a pretty difficult mechanic to get right in League. Especially when considering a champion needs to forfeit power elsewhere in their kit to have such a game-changing mechanic. When a champion has crowd control, mobility, or some other tool, they need to relinquish power in other ways. So the tradeoff for Akshan’s ability to revive his fallen teammates was to give up some of his actual combat power.

What this means in-game is that Akshan’s power is truly limited to burst—not the sustained front-to-back teamfight style of a traditional marksman—and unlike many assassins, he has no forms of slow or crowd control. But what he brings to a teamfight is equally powerful. And besides, who doesn’t love getting bailed out of a bad situation by a charming lad with a nice smile?

Akshan’s at his strongest when his allies are dying around him to an incredibly dominating opponent—like an enemy Viego who’s just gotten a quadra. It’s in those moments that the rest fades away, and Akshan gets to be who he was destined to become: a hero.

“Akshan’s resurrection mechanic doesn’t just speak to who he is, but his personal growth as well,” says JohnODyin. “He took his weapon—the thing he uses to revive his teammates—against Shadya’s wishes. Because he didn’t care about Sentinel rules. But when he’s confronted with the reality of his decisions, he realizes that he should be honoring her life instead of avenging her death. He knows he has to move on from his vengeance.”