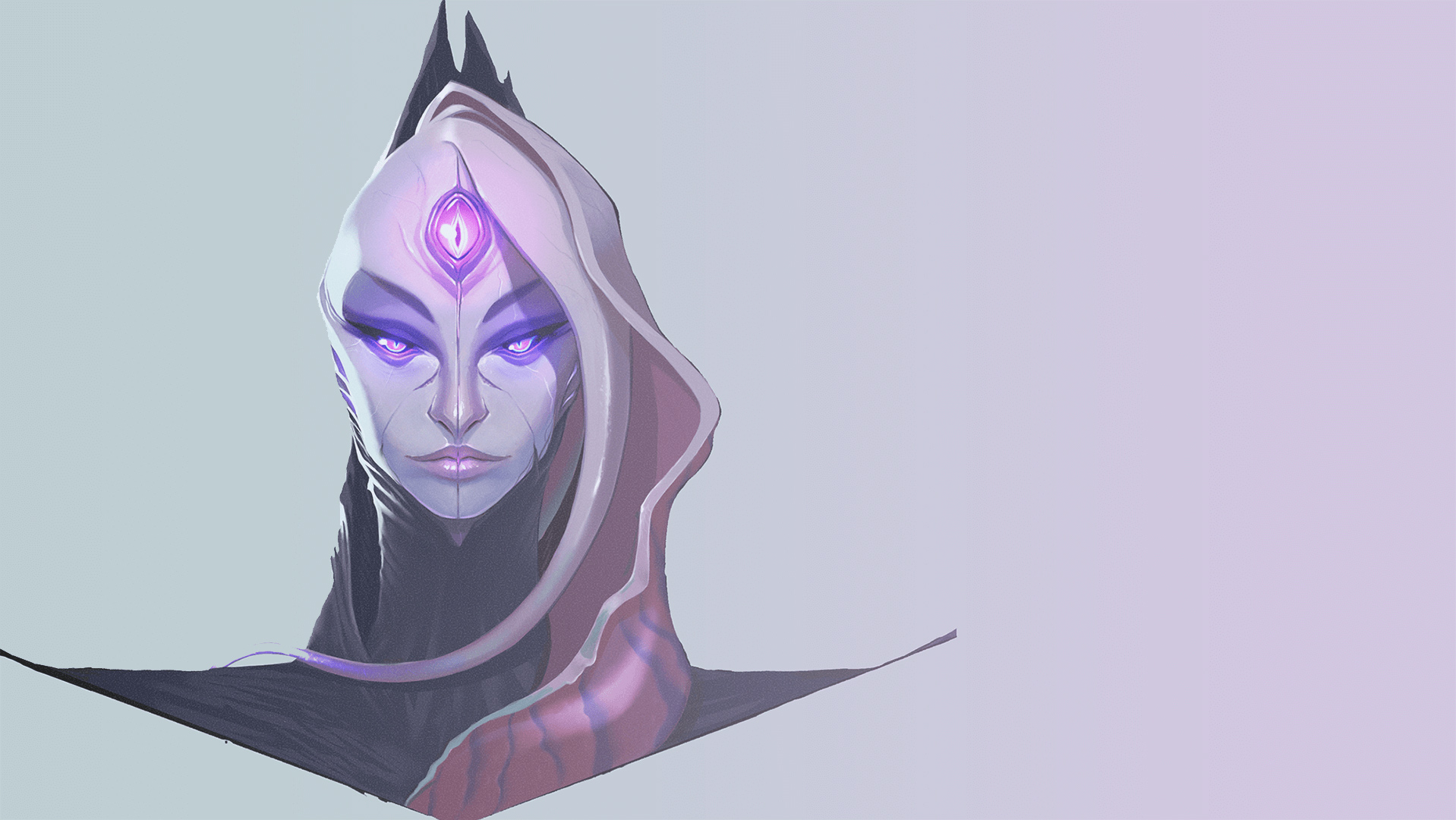 Bow down to your Void Empress.

The Void is the antithesis of life. It wants the end of existence. It wants nothing.

Though the Empress of the Void has only just now graced your screens, she has always been inevitable. She is the predestined product of a cancer that has been growing in the Void and changing it from within, undetected.

A Leader for the Void

The Void has always been something of a mystery, even to us. It’s a complex, overwhelmingly powerful concept that seeks to unmake the material realm. On a physical level, Void champions are insectoid, prehistoric, or gloopy—they don’t offer much humanity, no matter what Rek’Sai simps say.

With this in mind, the Champions Team wanted to create a character that would evolve the Void and bring in more storytelling potential. Someone who could move the Void’s story forward and offer an avenue for future conflicts.

“We needed an established leader with a voice and a role. Someone that looks and acts different than the Void stuff that we’ve seen before,” explains principal narrative writer Jared “Carnival Knights” Rosen.

The greater Void and the Watchers—the god-like masters of the Void—want existence to end so they can return to peaceful nothingness. But a new part of the Void is forming, and its goals go against everything the old Void stands for.

This new, cancerous pocket of the Void—the Lavender Sea—wants to exist on its own, a plan that flies in the face of the old Void. It has been slowly consuming parts of the mortal realm and recreating a broken, corrupted version.

When Malzahar opens a Void rift that swallows up the bustling metropolis of Belveth in its entirety, a massive flood of information is consumed. In a flurry of malignant growth, a new form comes into existence. Bel’Veth is born.

“She is very much a product of what a malevolent, metastatic cancer wants for the new Void. It wants a leader. It wants to be like the world above, so it makes her,” Carnival Knights explains.

Every piece of information from every mind of every being within the swallowed city has been consumed and used to create Bel’Veth. And though she has only just been “born,” she knows all of this information. She understands all of it. She can use all of it.

“Even though she’s essentially a baby, her mind contains millions of (Editor’s note: definitely over 200) years of compressed knowledge,” says Carnival Knights.

And what does a hungry baby Void Empress want? To consume everything in the universe, of course. But Bel’Veth doesn’t just want to consume.

“She uses the information she consumes to expand her mind and build a world of her own so that she doesn’t have to deal with the world of reality or the world of the Void,” Carnival Knights says. “When she destroys both, then she’ll finally have enough information to make the world that she wants. She believes that when she eats all of it, it will be perfect.”

She’s not your typical “evil” character though. She’s methodical and calculated, yes, but she doesn’t have an ego. She never lies—she doesn’t need to. She has simply done the math and come to the conclusion that she will win. Her victory is inevitable.

The rise of Bel’Veth and her newly enlightened Void will mean different things for different Void champs.

To Vel’Koz and the Watchers, Bel’Veth is a complete horror. In their eyes, a Void creature cannot want to exist.

Malzahar, on the other hand, sees the opportunity in Bel’Veth’s rise to power. She is a new path for the Void that he could get on board with, because he wants to bring about the end of the mortal world.

The more animalistic Void creatures may not even register that anything is going on. For beastly mother Rek’Sai, there’s an animalistic need to protect her offspring, the Xer’Sai, from Bel’Veth’s influence. Creatures like Cho’Gath, Kog’Maw, and Kha’Zix may ally with—or be forcibly changed by—Bel’Veth.

And as for Kai’Sa and Kassadin... They could find themselves in an unfortunate alliance of circumstance with Bel’Veth.

“Do you side with the creature who tells you that she’s going to eat you, but maybe it will take a little while because she’s gotta beat these other guys first? Or do you destroy her, fight her, maybe lose, and then the Watchers destroy everything anyway?” Carnival Knights ponders.

But we’ve only just witnessed Bel’Veth’s genesis—her ascent is yet to come. For now, Bel'Veth remains in the Lavender Sea, growing in power until the day she emerges and Runeterra is forced to face her.

Outside of expanding the Void’s story and impact on Runeterra, our new Empress also presented an opportunity to bring a new look to the Void.

In the past, the Void has been insectoid or alien with lots of hard, bony shapes. For Bel’Veth, the team wanted to go in a more natural direction, so they started considering inspirations like fungus and deep ocean creatures. They saw a lot of potential in concepts that inspired awe, but also fear.

Art director Larry “TheBravoRay” Ray pulled out a concept that had been put on ice long, long ago in a small indie company far, far away: the Void ray.

“The Void ray was iceboxed more than 10 years ago,” TheBravoRay says. “Brandon ‘Ryze’ Beck and Marc ‘Tryndamere’ Merrill approved the concept, but we couldn't figure out a kit at the time and didn’t have the proper tech to support the idea.”

So the giant manta ray has been waiting in the wings for a long time—but it’s not Bel’Veth’s only form. In fact, she hides her true manta form most of the time.

As the team started exploring the deep sea as an aesthetic direction, they latched onto the concept of lures—think anglerfish with lights dangling from their heads or creatures with bulbous, bioluminescent eyes that draw in prey. By the time the prey realizes what it’s looking at, it’s already too late.

And that’s precisely how Bel’Veth operates.

Using the information she has consumed, she creates the facade of a human woman. A false head is perched atop her manta body, framed by a flowing fin carefully draped to mimic hair. Her manta ray “wings” wrap around her to create a regal cloak. She moves as though she has legs, though there are only tentacles. She creates the eerie picture of a human, with none of the soul that comes with being one.

“We wanted to bring beauty, danger, and horror to the Void,” TheBravoRay explains.

But when Bel’Veth returns to her true manta form, she’s at her most powerful—and most terrifying.

“When she unfurls and the head goes away, you’re like ‘Oh, that’s what that actually is. I’m dead now,’” Carnival Knights laughs. 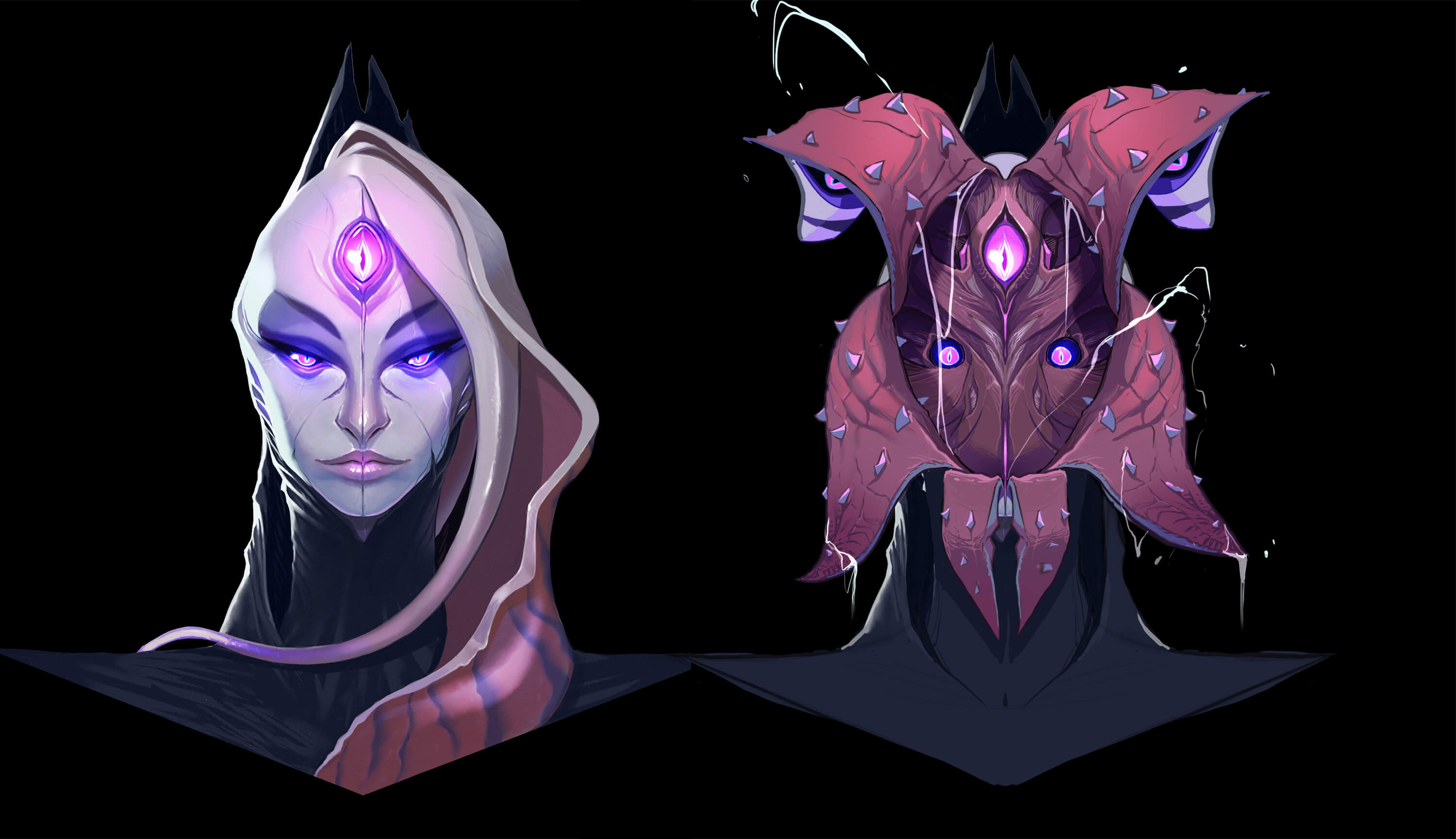 “I created sounds to match the colors purple, grey, or pink. A lot of those textures come out sounding goopy or guttural—thick, round, and both organic and synthetic at the same time. And then I added in organic textures by recording myself talking and making noises with my mouth into a microphone,” Riot Sound Bear says.

But he took things a step further to reflect Bel’Veth’s ultimate goal—consuming to expand her knowledge.

“I thought, how cool would it be if Bel'Veth consumed the audio of some older Void champions? So I decided to reprocess and re-create a lot of their iconic sounds.”

Daughter of the Void meets Empress of the Void
Vel’Koz’s thick, bassy waves were transformed for Bel’Veth
Rek’Sai’s audio is now part of Bel’Veth’s ult scream

The horror of Bel’Veth reaches far beyond her lore and physical design, all the way onto the Rift. She’ll bring terror to your late game, courtesy of game designers August “August” Browning and Jonathan “EndlessPillows” Fuller.

Bel’Veth’s kit revolves around feeding in the jungle. (No, not like your ranked teammates.) She wants to eat everything she can get her wings on. When Bel’Veth consumes (meaning kills) a large monster or champion, she stacks attack speed… infinitely.

And then there’s her ultimate. When August started on Bel’Veth he wanted her ult to feel like Bel’Veth was finally unveiling her true form.

“I was imagining what would happen if she actually managed to trick you. What would happen if she drew you in? The ultimate is the in-game expression of this,” he says. “She draws you in, she kills you, and then she devours your body. And then uses that energy that she got from devouring you to show who she truly is in all her grand splendor, which by the way isn’t even remotely human. It’s just a giant, angry manta ray.” 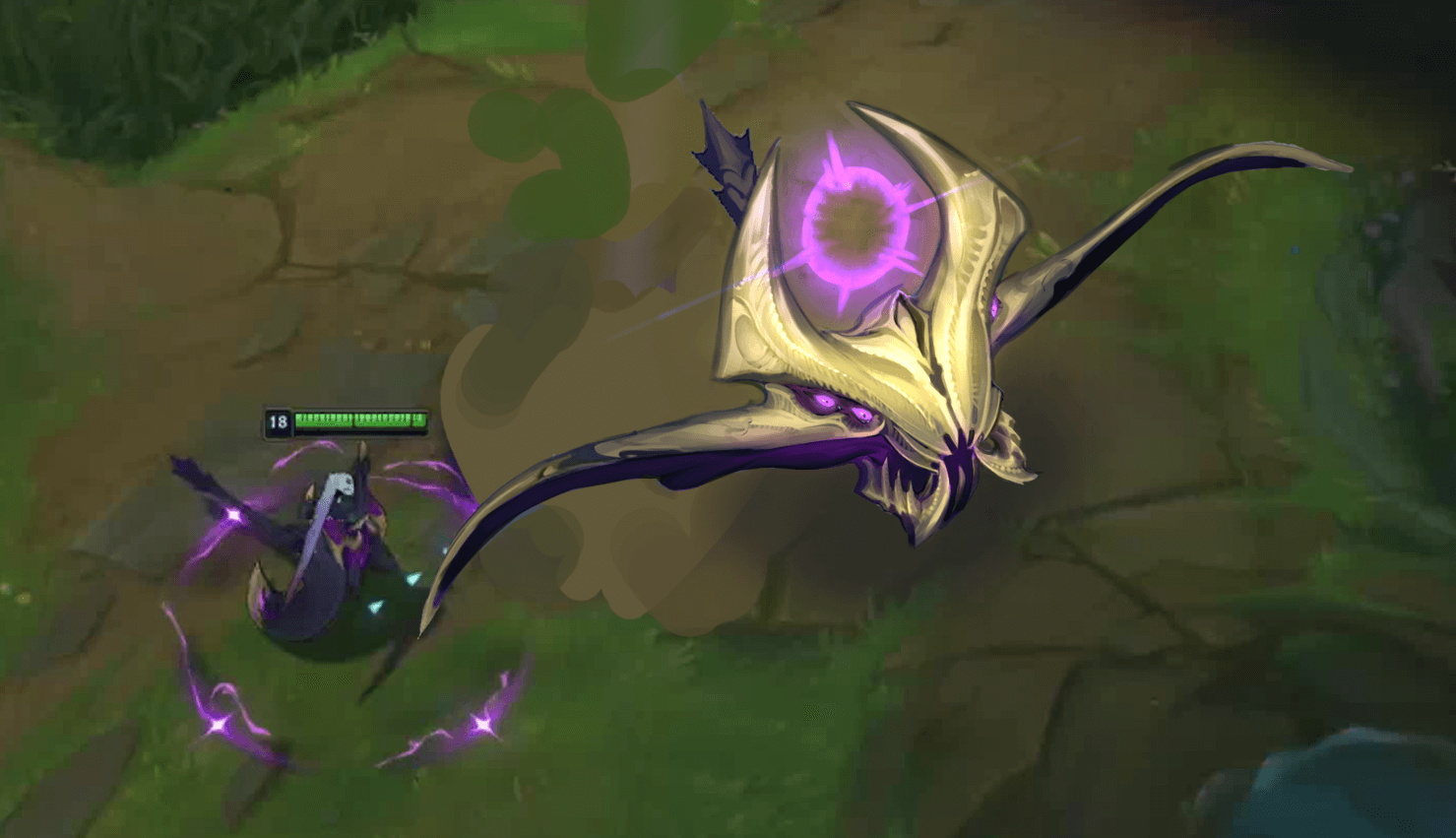 Bel’Veth’s base kit is already incredibly powerful, so her ultimate is less of a big in-combat moment and more of a long-duration steroid. After eating a body, she temporarily unleashes her True Form, which grants her increased max health, out-of-combat move speed, attack range, and total attack speed. She can also dash through walls while in her True Form by using her Q.

You can strategically use this ability where you want, whether you're navigating a team fight, pushing a lane, taking Baron, farming your jungle, or plotting the end of the mortal realm.

“Something we asked ourselves was does she really need a reliable in-combat ultimate like most melee champions? Or could she have something a bit different that can be used in different situations, given that her base kit has a lot of damage and movement already,” August explains.

And what is a Void mommy without her spawn? Using Bel’Veth’s ult to consume a Void monster—Baron or the Rift Herald—allows her to start summoning an army from the Void.

“Bel’Veth is the Void Empress, so she can rip open the fabric of reality and create rifts to another world that bring the Void to bear. She has that power,” August says. “So we expressed that by giving her a very special moment when she eats a Baron or a Rift Herald, where she will transform minions that die into voidlings.”

Before you pull out your pitchforks and “200 years of experience” signs, Bel’Veth should be pretty weak early (she is a newborn, after all), but as the game progresses all will witness the true power, beauty, and devastation of the Void Empress... and her super fast slappy wings. 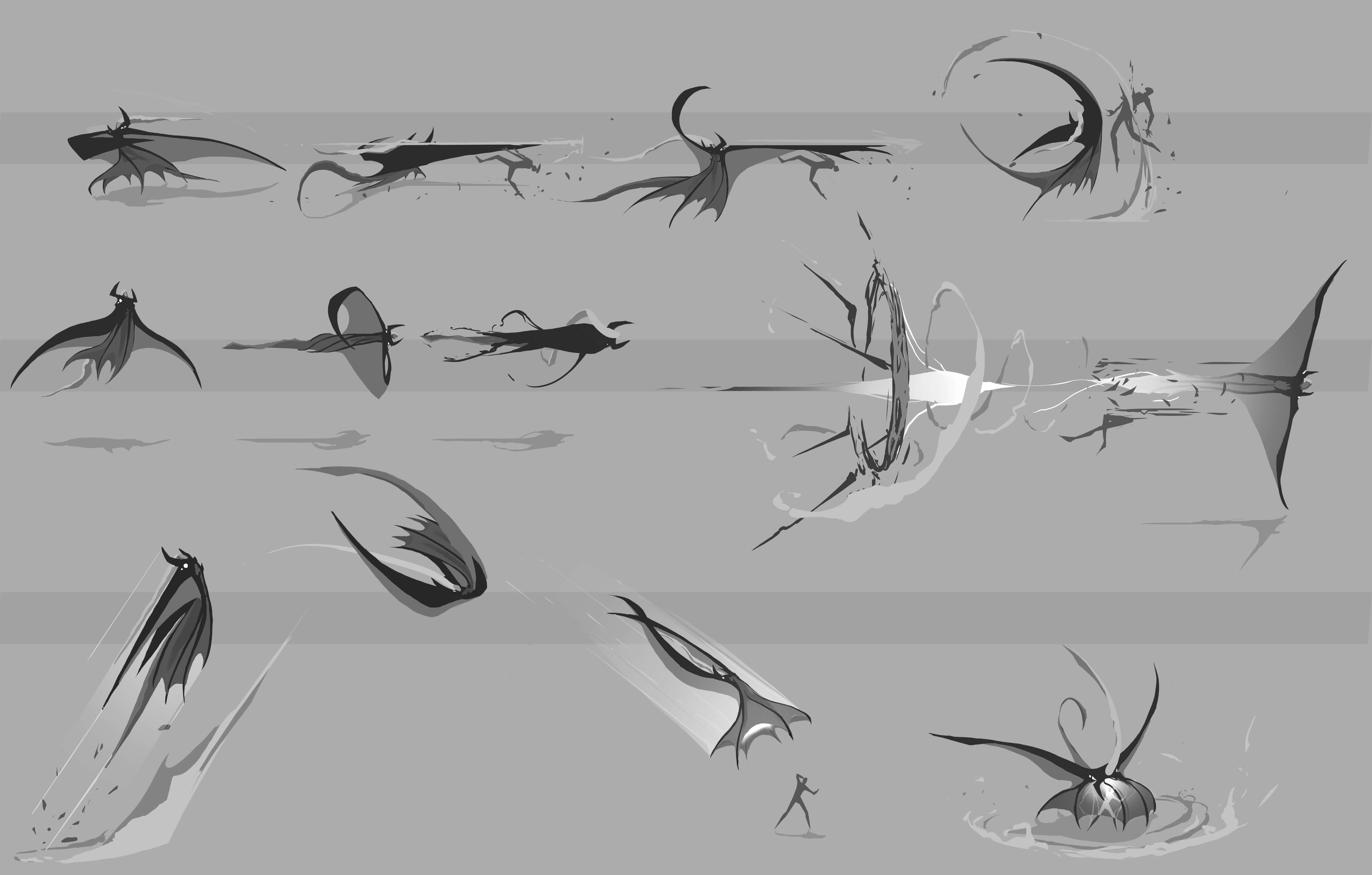 Bel’Veth may be a whole new frontier for Void champions, but she’s still a big ol’ monster when it comes down to it.

“Bel’Veth is 10 feet tall from head to ‘feet,’ but she’s 15 feet long from tip to tail, with a 22-foot wingspan. And then in her leviathan form she’s like Galio-sized,” Carnival Knights says, noting the team’s excitement for how players will react. “The taste for a giant lady champion is high right now, so I think the memes will flow heavily.”

A deserved welcome, as this giant lady takes a giant step forward for the Void.

“Bel’Veth is someone who can bring some logic, feeling, and personality to the Void, regardless of where it ends up. The Void just didn’t have the complexity that it deserved,” says TheBravoRay. “I hope that players will pick up on the fact that the Void is moving somewhere… and hopefully they like a big manta ray.” 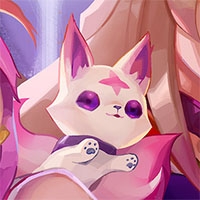