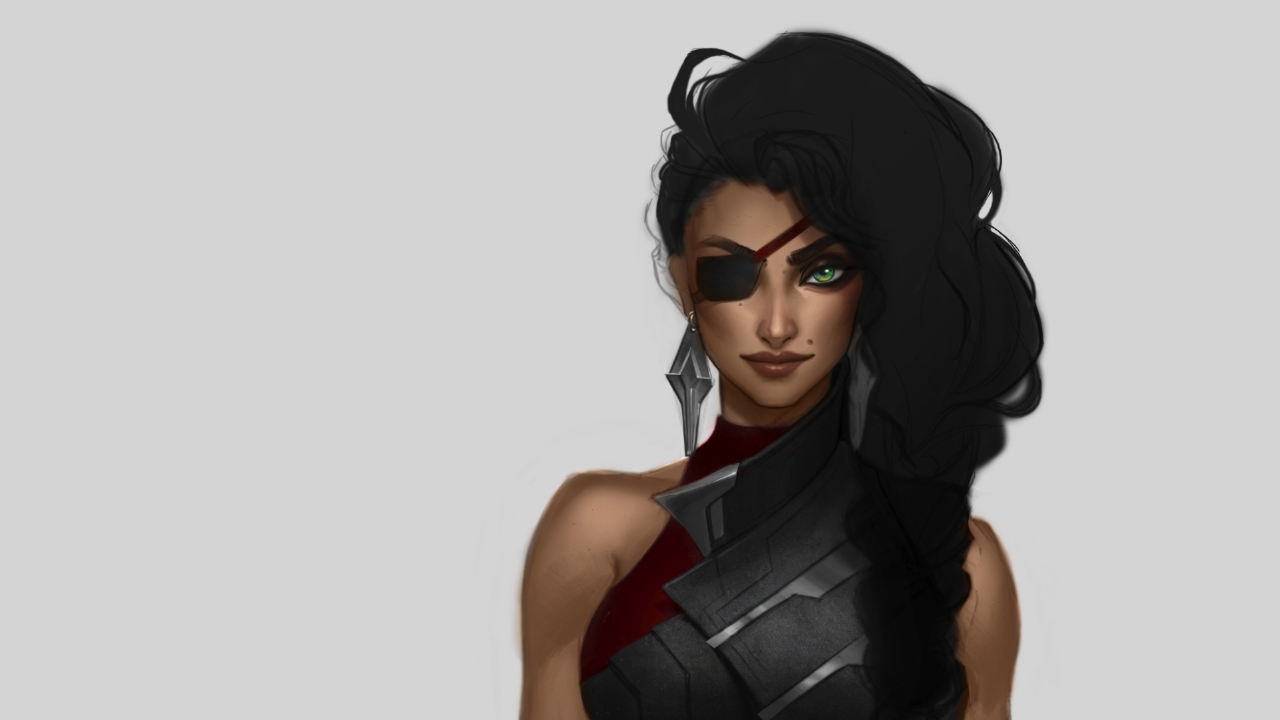 Many of League’s recent champs are charged with serious tasks, like saving their tree-mom from nightmares, finding an end to the Black Mist, or ridding the world of azakana. So what if we made a champion who’s not about all that and just wants some fun?

If that sounds good to you, then get ready to meet Samira.

Bringing a Gun to a Sword Fight

Samira’s gameplay was designed before she was even an idea for a champion. Game designer Blake “Squad5” Smith was already working on a combo-based kit that’d act as an homage to action-adventure fighting games when he was asked to make a champ.

“Everything just kind of lined up perfectly when the Champions Team lead Ryan ‘Reav3’ Mireles asked me if I wanted to design an ADC,” recalls game designer Blake “Squad5” Smith. “I told him the kit I was toying with and his response was, ‘Sick, we’re making that.’ And we just went from there.”

When the rest of the team joined, Squad5 already had a paper kit that was pretty close to what Samira has today: style meter, ranged/melee switcheroo, and limitless ult.

… hold up. An ADC who also uses melee attacks? Yup. Samira wants to dive into the fray to take out her enemies—just sniping from the backline is too easy. Sure, it’s breaking the cardinal rule of ADC and giving support mains everywhere a heart attack, but Samira doesn’t really care. It’s the thrill she lives for.

“I really wanted Samira to feel like a drastic change from ADCs like Jhin and Senna who just stand back and shoot you from a long range,” Squad5 explains. “Here’s a kit that actually wants you to go into melee range as often as possible. She wants to take risks and go for all-ins.”

So what kind of weapons make sense for a champion who fights just as well up close as she does from a distance? As an ADC, Samira should probably have some sort of projectile weapon. And if she’s fighting in melee range, she needs something suited for hand-to-hand combat.

“I had just finished up on Aphelios, so I’d been thinking a lot about arsenals of weapons. But I was sick of magic moonstones and all that—I really wanted some gun-ass guns and sword-ass swords,” jokes concept artist Sunny “Kindlejack” Pandita. “I wanted Samira’s weapons to be all metal, gunpowder, bullet shells, and greasy, big, belching smoke blasts.”

The only problem: How does someone from Noxus have guns? If they’re so accessible that a Noxian resident has them, then wouldn’t Noxus just wipe out all of Demacia with their superior weaponry?

Runeterra’s a diverse place in terms of weaponry. There are swords and shields, relic canons, magical books, sniper rifles, demonic swords, and a lamppost. Tons of technology is widely available, especially to someone who’s willing to pay... and maybe risk their life a little in the process.

“Samira goes on crazy missions for exorbitant amounts of money. She’s willing to take risks all the time, so why wouldn’t she be willing to do so on her weaponry?” explains Kindlejack. “She’s not going to use her great grandmother’s warsword or whatever. She wants the latest, craziest, most dangerous stuff because that’s what’s exciting.”

This is what made Kindlejack realize how to make guns work in Noxus. Samira gets paid fat cash for the crazy missions she takes on, and because she doesn’t really care about the money, she’s willing to drop it on the best stuff. Stuff made by the best weaponsmiths around. And it doesn’t come cheap. So Kindlejack came up with his idea of who’d craft Samira the thrill she was after: Lani and Miel Munitions, expert weaponsmiths.

That doesn’t mean Samira could run around the Rift using a glock, but she could use some pretty badass spring-loaded weaponry: Two gun-ass guns and one sword-ass sword (that has explosive ammunition of its own).

So, how did a woman from Shurima end up becoming the best gun-for-hire in Noxus?

“From the beginning of development, we really wanted to create a character from a less represented ethnic background,” Kindlejack explains. “My father’s from Kashmir, and I really focused on that region of our world. When we think about Middle Eastern or Southern Asian influences in Runeterra, the obvious region is Shurima.”

We don’t really know much about modern Shurima. We’ve got a bunch of animal-like demigods, a mummy, a girl who rides rocks, and a fortune-hunting mercenary. Most of the lore is tied up in events that happened thousands of years ago. Samira could give us a way to take a look at what’s going on in Shurima now. What’s it like for the average person? What’s happening in this desert wasteland?

The problem with Samira hailing from Shurima is Sivir. Samira’s a gun-for-hire and Sivir’s a mercenary captain. They’re basically in the same profession. Sure, Sivir’s in it for money and Samira’s in it for the fun, but does that really make a huge difference?

“When we ran into the block with Sivir and needed to make sure Samira felt different from her, we looked at another region in Runeterra we thought would work: Noxus,” says narrative writer Michael “SkiptoMyLuo” Luo. “Noxus allowed us to explore a completely different story, one that we haven’t done in League: an immigrant’s.”

“Noxus is the land of free-living ‘be yourself’ people, and we could still hit a bunch of the Shuriman heritage while giving Samira the agency to choose to go to a place that fits her lifestyle. Both Kindlejack and I have that immigrant experience, and we thought it was a really authentic and interesting story to tell,” says SkiptoMyLuo.

So taking a step back and focusing on Noxus, the team had to ask themselves, “What do we really know about this region?” As it turns out... not as much as they thought. We essentially have two points of view: Champions like Darius and Swain who buy into the Noxian colonization ideals, and those like Xin Zhao and Riven who really, really, really don’t. We haven’t gotten to see Noxus through the eyes of someone who adopted the nation as their own.

“Samira’s not caught up in Swain’s political maneuvering, Draven’s glory in the fighting pits, or even Darius’ expansionist goals. She loves Noxus for the excitement it offers her,” SkiptoMyLuo explains. “She can join up with a warband and go on crazy life-or-death missions, or take a mission from The Black Rose without thinking twice. She’s just there to have a great time and to do the things that no one else dares. She’s just living her best life and getting paid to do it.”

Samira’s at her peak, and it’s your job as the player to get on her level. She’s always ready—everyone else is just trying to catch up. And that’s the vibe Squad5 was trying to hit when he decided to make her ultimate cooldown-less.

“Riot. Stop. You literally made a champion with a moving Katarina ult that has no cooldown. What’s wrong with you?”

Samira’s passive is a style meter. Weave unique attacks together to increase your style, and when you get to S, you unlock your ult.

“Samira looks really difficult because you have to alternate different attacks constantly to build up her style. The first question when you see that is, ‘Why should I use unique attacks?’” Squad5 says. “The payoff for a system like this needs to be really good, so we landed on it being her ult.”

Samira could simply unleash a hellfire of bullets and sword slashes on her enemies, but that’s no fun. She wants you to play her mini-game, style on your enemies, and then you can press your ult. Your reward? It has no cooldown... except for how fast you can style on ‘em again. But don’t hold back, because the queen of slay is impatient.

While gameplay’s sick, and that’s what we’re all here for, Samira’s style goes beyond her mechanics:

Animations(as told by senior animator Tom Robbins): Samira was a challenge not because she was particularly difficult, but because I had no boundaries. In fact, I usually wasn’t going far enough. We typically have to keep our character motions somewhat reasonable, but I had to embrace a level of unreasonable I hadn’t before. I mean, we don’t usually have champions doing things like surfing on their swords.

Tattoos (as told by Kindlejack): When I was thinking about how to create Samira’s tattoos I was inspired by the art of henna, but I’m also in love with the Noxian script. I got to introduce players to it with Mordekaiser and Fiddlesticks, and I wanted to continue it with Samira. But when I was thinking about the style of tattoos Samira would get... She’s not the kind of person who’s going to plan out elaborate tattoos that have deep meaning. She’s impulsive and fun-loving, so she’s just going to get something cool to commemorate a really fun fight. I imagine she gives her artists a bit of liberty.

Eyepatch (as told by SkiptoMyLuo): A lot of our “performer” champions are all about perfection. Jhin’s definitely obsessed with everything being perfect, and to an extent so is Draven. But not Samira. She’s the type of person to lose an eye and go, “Yeah, I’d do that all over again. It was really fun.” She doesn’t care about losing an eye. That’s why we’ve got two.

Clothes (as told by Kindlejack): I wanted to capture Samira’s love of freestyling on her enemies in her clothing while keeping her fashionable. In Legends of Runeterra we released Vladimir’s followers, and they showed a more stylish side of Noxus. I wanted to bring that into what she’s wearing while still highlighting her Shuriman heritage with the gold tones and a subtle green hue to match her eye colour. Even Samira’s gloves have a purpose—her guns are dangerous and can spit back ignited gunpowder at any moment.

Coins: Samira doesn’t care about money. In fact, she’s the only champion who actually gives gold away.

“I really wanted to create a champion with a BM taunt. Back when I was working on Sylas it was something I wanted, but it didn’t fit,” recalls Kindlejack. “So one day I messaged Squad5 and said, ‘Coins.’ And he was like, ‘What do you mean coins?’ So I said, ‘What if there are just coins involved in her attacks somehow?’ ‘That’s not guns and a sword,’ he said. So I said, ‘But think about it. Coins, right?’ So we came back around to the BM taunt and we had her throw a coin at her target. And then Squad5 was like, ‘What if it actually gives them gold?’ So yeah, it’s a skill that’s been three years in the making.”

“Just as a note, the taunt counts as a unique damage source for her passive,” Squad5 laughs.

“It’s the first skill-based taunt in League! You have to aim it! And it hits monsters, right?” SkiptoMyLuo asks.

“Yup! Epic monsters. It only deals one damage though,” says Squad5.

“One true damage! You could stand outside the Baron pit and if the jungler doesn’t know how to smite, you could steal it,” jokes SkiptoMyLuo.

“I reckon it’ll be about a day before there’s a highlight video of someone flexing and stealing Baron with a coin in true Samira style,” says Kindlejack.