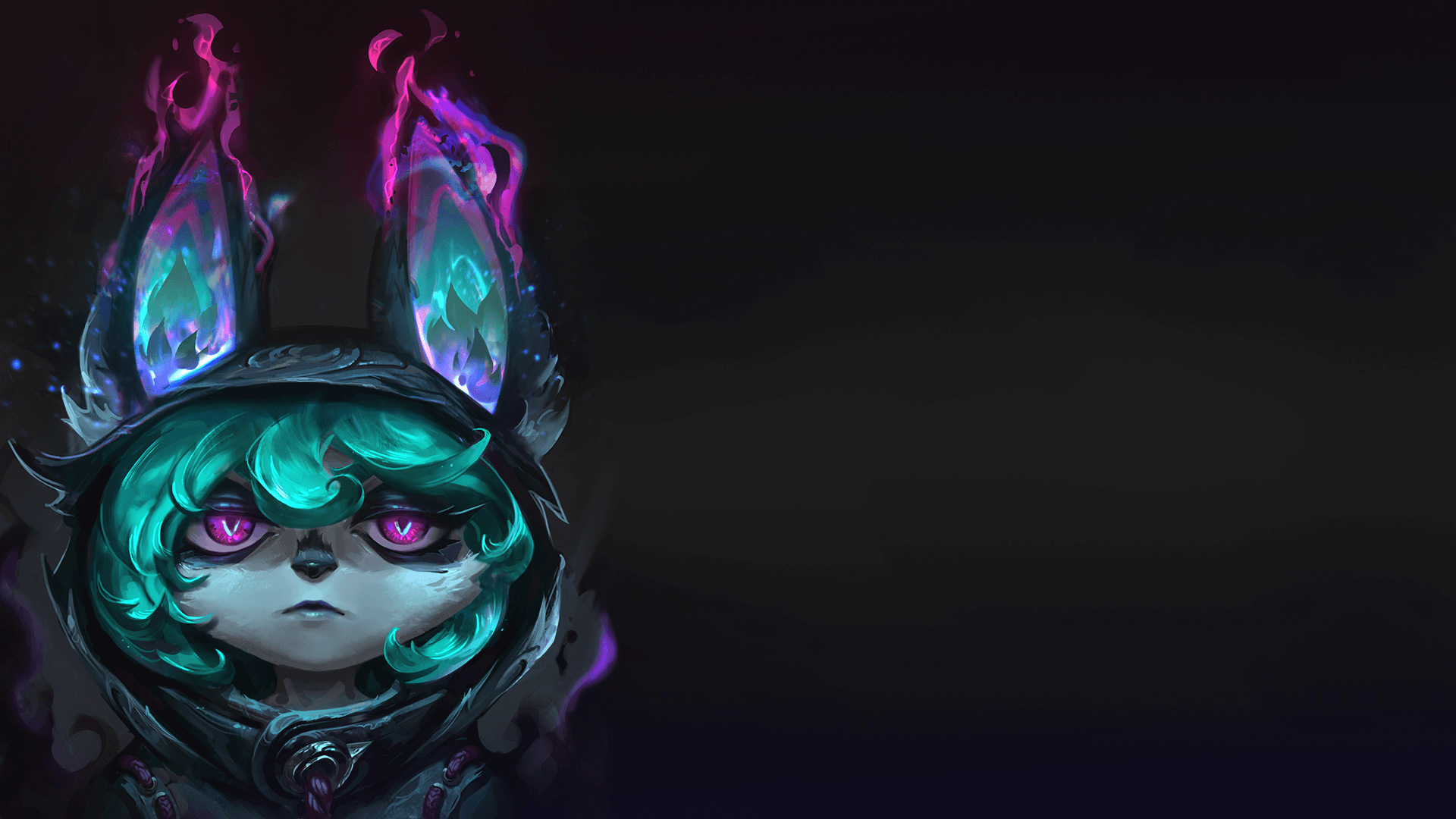 Dear Vex, Count Me In

Editor’s note: Hi. Just as a heads up, we talk about depression in this article.

Picture this: It’s 2006. You slam your bedroom door and flop onto your bed, the most recent argument with your parents replaying in your head. Reaching for your journal, you start to document their latest torture.

“they just don’t get me... NO ONE gets me. i swear they don’t even try,” you scrawl furiously. “they say they want me to be happy. don’t they know how miserable i am here? i’m not their little ray of sunshine. my clothes are black to match the pit of my despair—the darkness in my soul.”

Does this bring back memories of regret ringed with far too much black eyeliner? Yes? Good, this champ is for you. If not... Whatever. We don’t care, and neither does Vex.

She’s Not Okay (We Promise)

When Vex’s development began, the team knew she’d be a mage and a yordle. And while we make mages often, it’s been a while since a new yordle has graced the Rift—seriously, Kled was released in 2016 (congrats you’re old).

Bandle City has a pretty diverse cast of champs who call it home. There’s a shark-summoning psychopath who plays painful practical jokes, a pilot who sounds like he should be talking over a HAM radio, and a sorceress who has definitely never licked a psychedelic toad, to name a few.

But what do they have in common? What makes a yordle, a yordle?

Yordles are spirit creatures who are deeply fascinated by Runeterra. So fascinated that they often leave Bandle City to learn more about the mortals who live there. Some yordles become so invested in their “studies” that it affects their own personalities, leading to some interesting results. In other words: Some yordles glom onto a specific aspect of mortal culture and it slowly becomes who they are. For example, Poppy is an ultra-humble hero, Kled thinks he owns Noxus, Heimerdinger saw a scientist once and is now one of the most genius inventors in Runeterra. (You know, normal mortal stuff.)

This breath of human experience meant the team had loads of options for what could define Vex. But they wanted something unique among yordles. Something darker. Something...angsty. 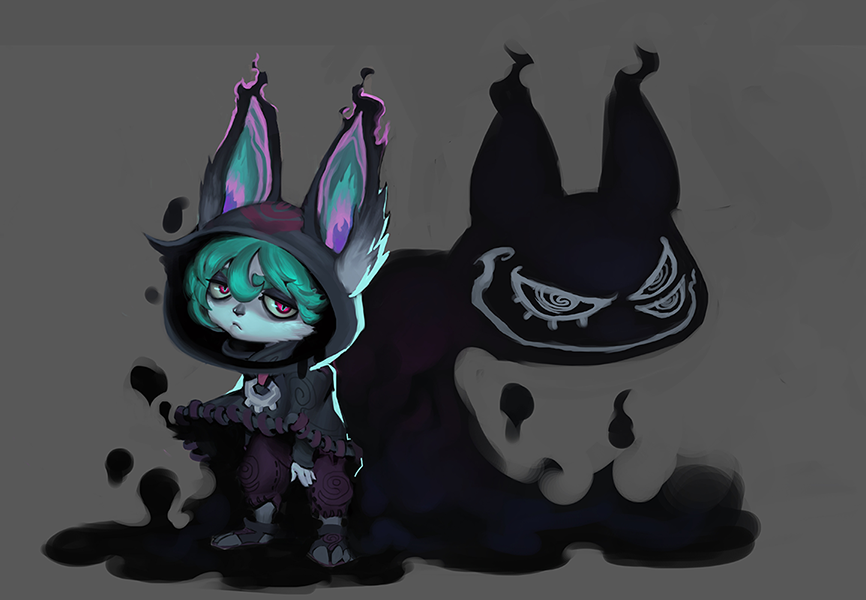 League champs are usually designed to be aspirational. They’re often brave heroes who are destined to save Runeterra, or powerful villains hellbent on world domination. So what if we had a champion that’s just meant to be relatable? Someone you might see yourself in. Somebody who just doesn’t give a damn.

“I became an adult in the ‘90s, and Vex isn’t all that different from the surly ‘90s slacker. She’s kind of too cool for everything,” shares principal narrative writer John “JohnODyin” O’Bryan. “Beyond that, a lack of motivation is something that me, and a lot of other people, identify with. I really wanted Vex to resonate with anyone with a history of depression. Who the f&^% hasn’t wanted to not get out of bed and go do what they gotta do? But with Vex, we leaned more into the teenage feel of apathy and angst more than outright depression.”

Which, let’s do something we don’t normally do in these articles and break that pesky fourth wall: We’re not asserting that teenage angst is the same thing as clinical depression. But for many of us growing up (your friendly shitposting author included), we weren’t sure if we were dealing with normal teenage hormones, perpetual bad moods, or actual clinical depression. And this is something the team poured into Vex, because they wanted to create a genuinely relatable experience that isn’t often done in media.

Anyway, back to Vex.

Teenage angst is practically universal, and it felt like a unique personality for a yordle champ. But a surly, unmotivated teenager ran the risk of being kinda one-dimensional, and people are far, far more complex than that. Vex is more than that. She’s not just moody and apathetic. There’s more going on in her furry little yordle head that the team wanted to express.

When concept art lead Gem “Lonewingy” Lim started to think about what Vex would look like, she needed to consider more than which shade of black the yordle would wear. She wanted to give Vex an outlet for her emotions. 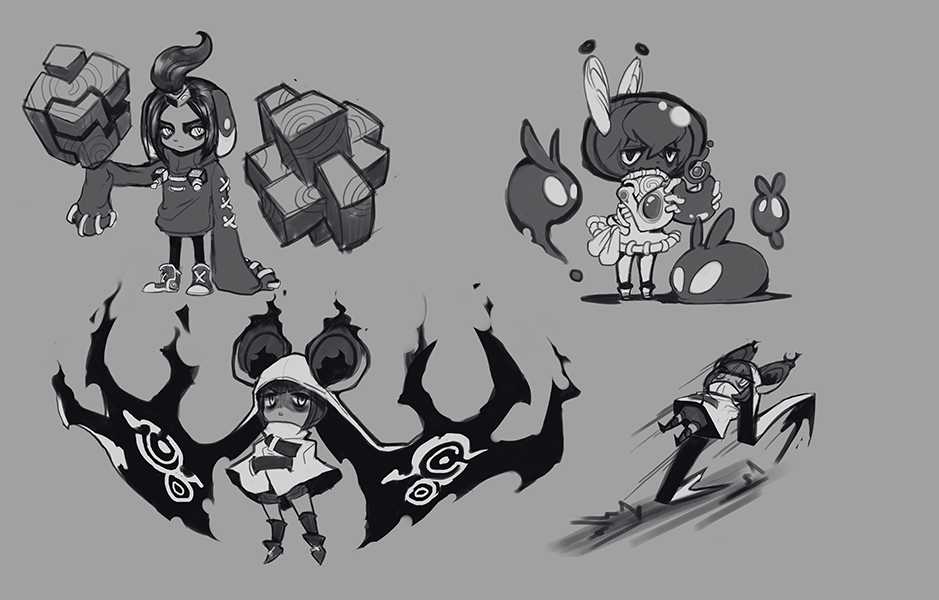 Of all the apathetic teens in the spread, the “big arms” concept stood out the most. Vex could keep her air of cool, collected goth yordle while her hands betrayed her true feelings. But there was one problem: Vex was a mage, not a fighter. 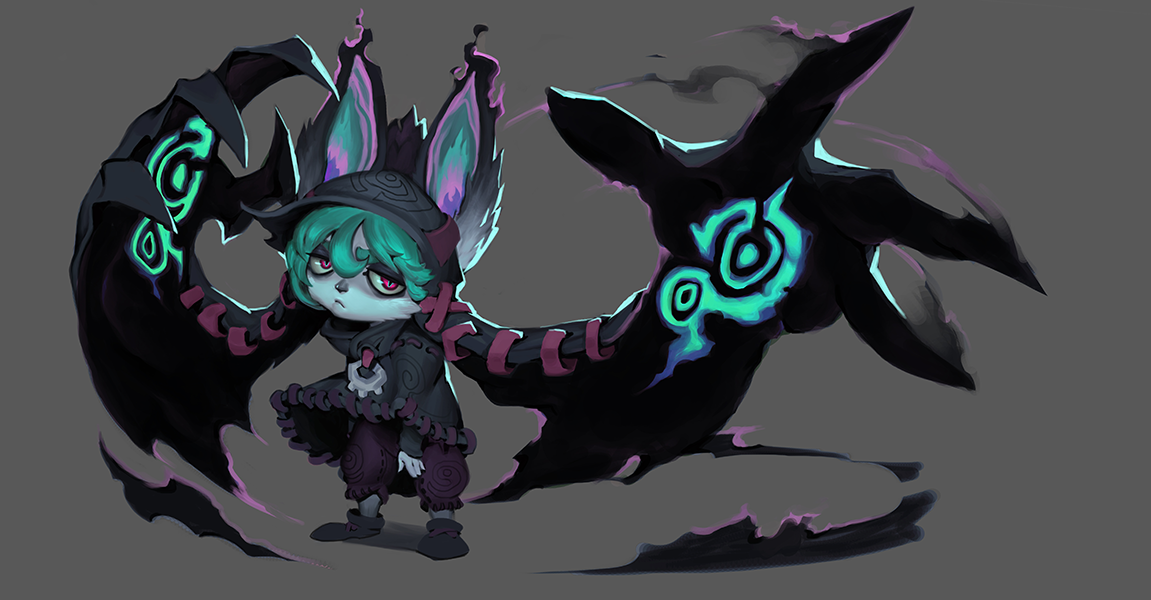 “When you see two big hands on a champion, you’re limited to what you can express with their animations and gameplay,” Lonewingy explains. “It basically boils down to things like grabbing, controlling, and puppeting. That direction was really risky because it didn’t communicate how a mage’s gameplay is supposed to feel. So it wasn’t the right direction for her. That meant we needed to find a new way for Vex to express herself.”

Luckily there was another concept in the original spread that spoke to the team. The “goo bunny-mancer.” But the team had some questions, like “where did the bunnies come from? And why would this apathetic loner have pets?” The answer was that maybe they weren’t just pets. Maybe they were more than that. Maybe they were a part of her all along.

The goo bunnies weren’t the thing the team really liked—it was what they represented. So when Vex’s kit shifted to a control mage (more on that later), so did her visual design. And that’s when Shadow was born. 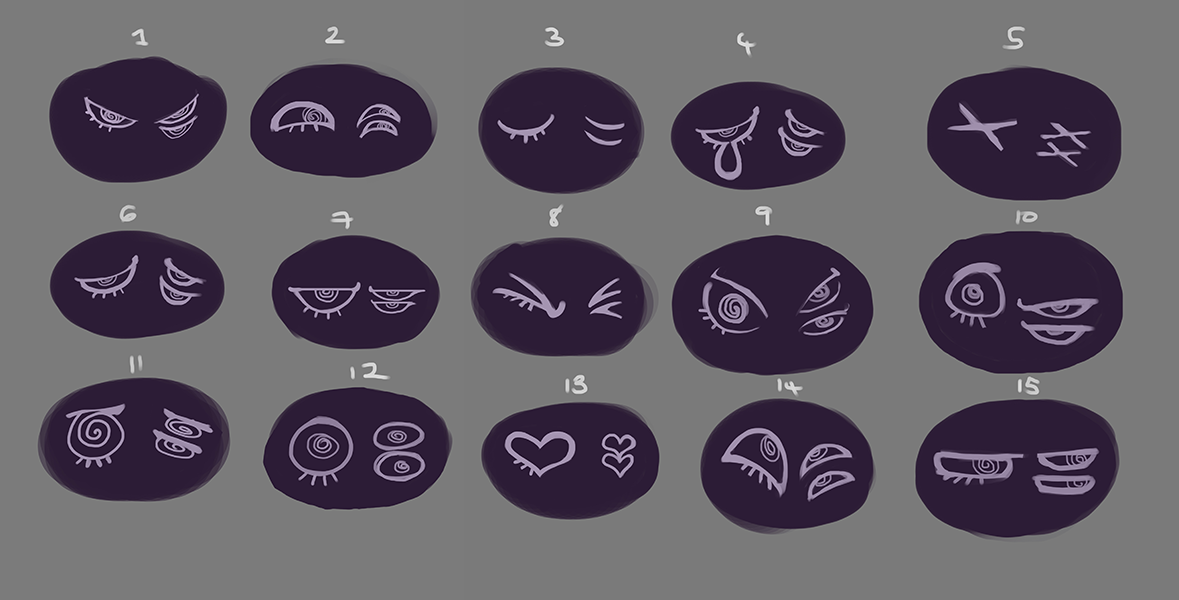 Long before teaming up with Viego and becoming empowered by the Black Mist, Shadow was simply a shadow (huehue) of the power it is today. It was merely a tool Vex used to grab a bag of chips from the cabinet when she was too lazy to get up from her beanbag, and not a powerful source of shadow magic that almost caused Runeterra to fall to the whims of a shirtless simp king.

But the Shadow we have today almost wasn’t. And the reason why is pretty dark... literally.

“Vex’s color palette is almost all black, including Shadow. And that’s a really difficult thing to get right while maintaining readability,” Lonewingy recalls. “The first version of Shadow was a giant puddle of black ink with eyes and ears. It’d get disturbed and ripple out, but it was really just an amorphous blob similar to Vladimir’s pool.”

“It was really difficult to see whether Vex was facing forward or backward because of her clothing and how dark Shadow needed to be,” continues Lonewingy. “It caused a huge headache for us because there were so many technical hurdles. We didn’t have the tech to support a living shadow, and the engineering team put in so much work to make Shadow feel like a living, active part of Vex and League.”

Vex and Shadow’s interactions in-game might raise a few eyebrows. She often speaks to it with annoyance and anger—which certainly says something about how she sees herself. But more importantly, it grants a glimpse behind the carefully crafted mask of indifference to the thoughtful, crazy expressive yordle underneath... and to the crushes she pretends not to have.

When we first talked about Vex, we mentioned that we were making an artillery mage. A lot of players were really hyped for that—and for the record, so were we. Before we jump into the Vex we have today, let’s talk about how she started.

Vex’s original gameplay, designed by Nathan “Lutzburg” Lutz, created portals that extended the distance allied missiles traveled. You’d essentially have Miss Fortune ults that went double distance, Blitzcrank hooks from out of nowhere, and all these other really scary, but really cool experiences. Except there was one problem: It cost multiple years of VFX budget.

That’s not an exaggeration. Nearly every missile ability in League needed to be completely redone with updated VFX just to interact with Vex’s kit. And that just wasn’t feasible.

Vex’s artillery mage kit was centered around the extension mechanic, so when that was scrapped her entire kit needed to be reconsidered. Taking a step back to rethink her kit, the team realized they were overlooking the thing they loved most about Vex: her personality.

Vex is annoyed by everything around her, especially if it’s hyper and, *shudder* peppy. And you know what’s high-energy and annoying in League? Dashes. There are so. Many. Dashes. And Vex is having none of it.

“Every so often, Vex’s next basic spell fears and interrupts dashes. And whenever an enemy dashes near Vex, they’re marked with Gloom and then her next basic attack, Q, or W deals bonus damage and refunds cooldown on the fear. Basically, the more an enemy dashes, the more damage she deals and interrupts their dashes,” explains game design manager Bryan “Riot Axes” Salvatore. “Because her new kit hook is only cool if people are nearby, Lutzburg and I needed to pull back on her range and make her feel more powerful when enemies are close. That meant she needed to not be an artillery mage anymore. Because if someone with range like Xerath is good against divers, they have no weaknesses, and that’s not good game design.”

In short, if Yasuo’s dashing around and hasagi-ing minions half a screen away, Vex doesn’t care. But if he and his toilet-paper-wearing brother come at her directly, she’s going to get real annoyed and shut them down.

But Vex is a mage and not a fighter, which means she needs to be able to sling spells from some amount of range. Luckily that’s precisely what her Shadow’s for.

“Vex’s ult is really its own thing in her kit. It’s basically a dash that resets on kill—it’s a very high mobility, high octane, exciting moment which is actually super awkward for Vex! Because she’s more into putting down high octane and exciting moments,” Riot Axes shares. “Vex’s ult is Shadow, her expressive side, taking the wheel for a moment. How it all fits together is pretty simple, enemies dashing around near her annoy her and empower her to do more damage, and then if they try to escape she can turn the tables and dash to them to continue taking out her annoyance on them until they’re dead.”

Welcome to the Vex Parade

Before you trudge off to lock in Vex the next time you see any high mobility champs on the enemy team, we wanted to leave you with one last conversation that didn’t quite fit in but we wanted to share anyways:

“A question I kept coming back to during development was, ‘Can you make a MOBA champ that doesn’t want to be a MOBA champ?’” JohnODyin recalls. “I found that question super compelling. We never know how a champion’s going to land, but Vex is a bigger gamble than we usually take. I think some people will really love her, and some won’t.”

“Exactly! And that’s okay! Not every champion has to speak to you, and that’s completely fine, because sometimes they’re targeted for someone else,” Lonewingy adds. “You’ve got your Sett players, Maokai players, Bard players... I’m not expecting everyone to like Vex, but she’s for the people who will.”

“I remember hearing her VO for the first time and some people thought it was too over-the-top. But I swear I actually knew this person in high school,” laughs Riot Axes.

“Yeah. Making champions is just like making a rainbow,” offers JohnODyin. “You have to make a rainbow when you’re making all these champs, and Vex gets to be our dark gray.”