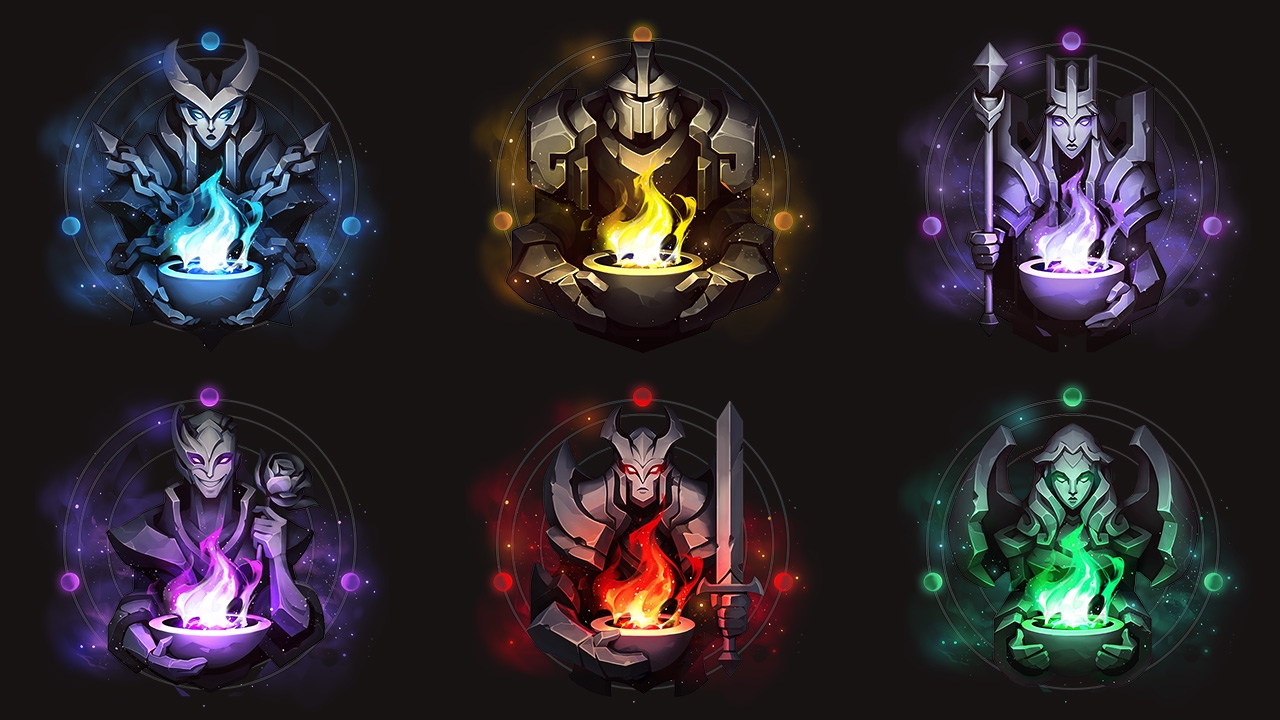 Thanks to your feedback, Eternals are launching with more unique stats & ways to earn without RP.

When we announced Eternals last year, we were really excited to bring champion-specific stat-trackers to League of Legends. Eternals introduced more reasons to play your favorite champs, new ways to flex on your foes, and a novel form of progression that made the game more fun. However, it was clear from your feedback after our PBE reveal that we missed the mark in a few key areas.

As a result, we made the call to delay our launch while we took a step back and identified three ways to make Eternals a better experience:

Before we get into specifics on how we’re addressing these goals, let’s cover the basics: What are Eternals? And why are we excited about them?

In a nutshell, Eternals are champion-specific stat-trackers that capture, celebrate, and flex your moments of glory in and out of game.

Check out this video for the TL;DR:

At launch, there will be two Eternals series available: a Starter Series (more on this later) and Series 1. Each series contains a set of three Eternals per champion, and we’ll release more over time as we see what stats players enjoy tracking. 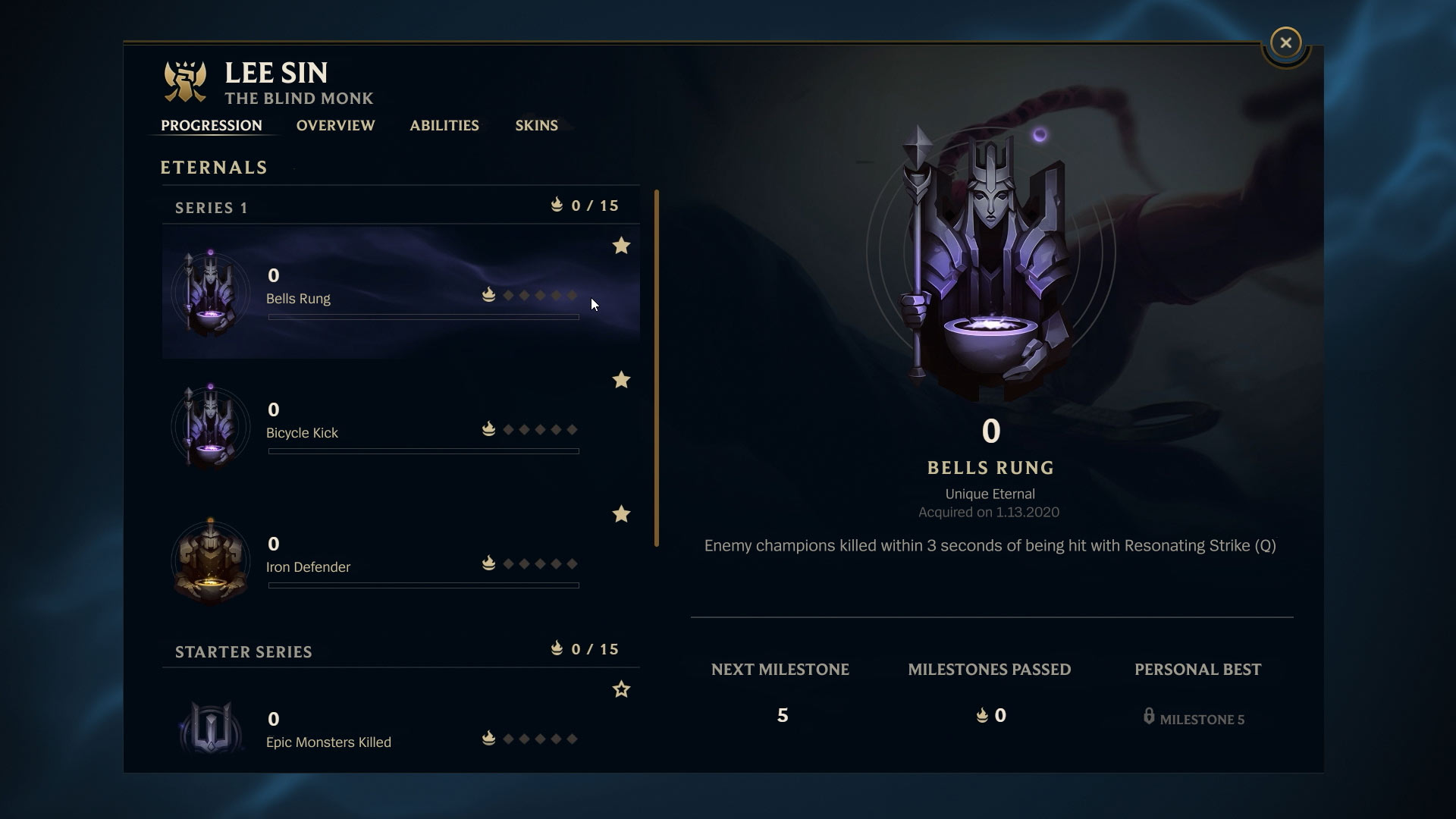 Stats begin tracking as soon as you unlock them. When you pass a milestone, like 50 Bicycle Kicks on Lee Sin, a callout pops up in game that all players can see to celebrate the moment.

Note: The in-game callout is smaller than what’s represented here!

Eternals are also visible to other players alongside Champion Mastery in your Player Showcase. The Player Showcase is visible in two places: on the back of your champion card in the loading screen and on your opponent’s death screen after you kill them or assist in their death. The first set of Eternals you unlock for each champion are featured automatically, but you can customize which Eternals you want to feature. If you don’t have any Eternals, no problem, we’ll still show off your Champion Mastery just like on the loading screen.

Here’s how your featured Eternals look on the back of your champion card:

And finally, here’s what your enemy will see when you kill or assist in killing them:

A set can contain two types of Eternals, Common and Unique:

If you're curious, you can see the full list of Unique Eternals for all champions here.

For example, Series 1 contains sets with 3 Uniques and will cost 600 RP per champ, while a hypothetical future set with 2 Commons and 1 Unique would cost 350 RP.

What Did We Change (and Why)?

Based on your PBE feedback, we identified three ways to make Eternals a better experience:

Many of you told us our first series of Eternals wasn’t exciting enough and didn’t let you show off your skill in the ways you wanted. To address this, we've added two more Unique Eternals per champion to their launch sets, with an emphasis on capturing the high moments unique to each champion. Here’s an example of how one champion’s set evolved to be more skill expressive based on this feedback:

We also took some time during development to post our designs for all 435 of the new unique Eternals to get players’ feedback on where we were headed. It was really fun to work directly with you on designs, and it ultimately resulted in a bunch of modifications to the launch series. Here are a few more examples of the changes we made based directly on your feedback:

There were so many great ideas that you shared with us during our discussions that we couldn’t fit into our initial release, so we’re really looking forward to making them for future series. In the meantime, let us know what other top moments about playing your favorite champion you’d want to track and flex with Eternals. They could make their way into the next series!

We think League will be a lot more fun for everyone if more players have access to Eternals, so we’ve created a Starter Series for every champion in the game.

We specifically chose these stats because they encourage teamplay and are applicable to all champions in the game. You won’t need to last hit a turret or dragon to get credit for these, so long as you participate in taking the objective or kill, your stats will go up. 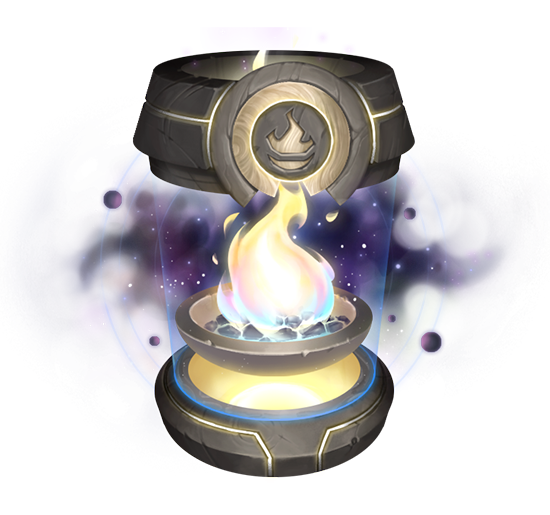 Sets in the Starter Series behave just like any other set: hitting 15 milestones across any of the Eternals in a Starter Series set will upgrade your Mastery Emote. You can also unlock Personal Best for all of these stats by hitting milestone 5 on each of them.

In addition to the Starter Series, we’ll also be releasing Eternal Capsules as an additional free reward in Ranked Splits.

Eternal Capsules contain Orange Essence and two random Set Shards, which behave similarly to Skin Shards. A Set Shard will unlock an Eternals set for a specific champion when upgraded with Orange Essence. You’ll also be able to disenchant unwanted Set Shards for Orange Essence if you so choose.

With these updates, players will have multiple ways to unlock Eternals without spending RP. We’ll have more to share on Eternal Capsules and Set Shards after launch.

When we announced Eternals, we got lots of feedback saying that players with large champion pools didn’t have a great way to get Eternals for their entire roster without breaking the bank. Originally, we anticipated players would only unlock Eternals for one or two champs, but we realized we could do much better for players who want Eternals on every champion (or a whole lot of ‘em).

So at launch, you can grab a Series Pass that instantly unlocks all the Eternals in a Series for every champion at a massive discount. 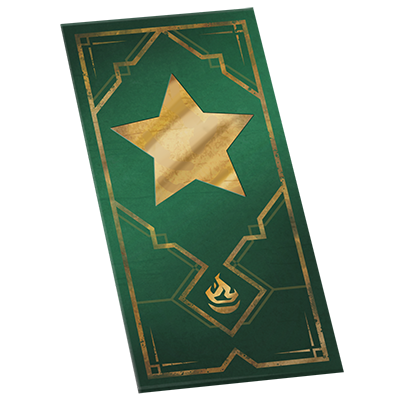 We’re really excited about all of these changes to Eternals, and can’t wait to see how high you push all of your stats in the years to come. Thank you so much for all of the feedback on Eternals thus far, and be sure to let us know if you have any more ideas on how we can continue to improve. Also, hit up our FAQ if you still have questions about how certain parts of Eternals work or if you want to know more about the lore behind them.

See you on the Rift!