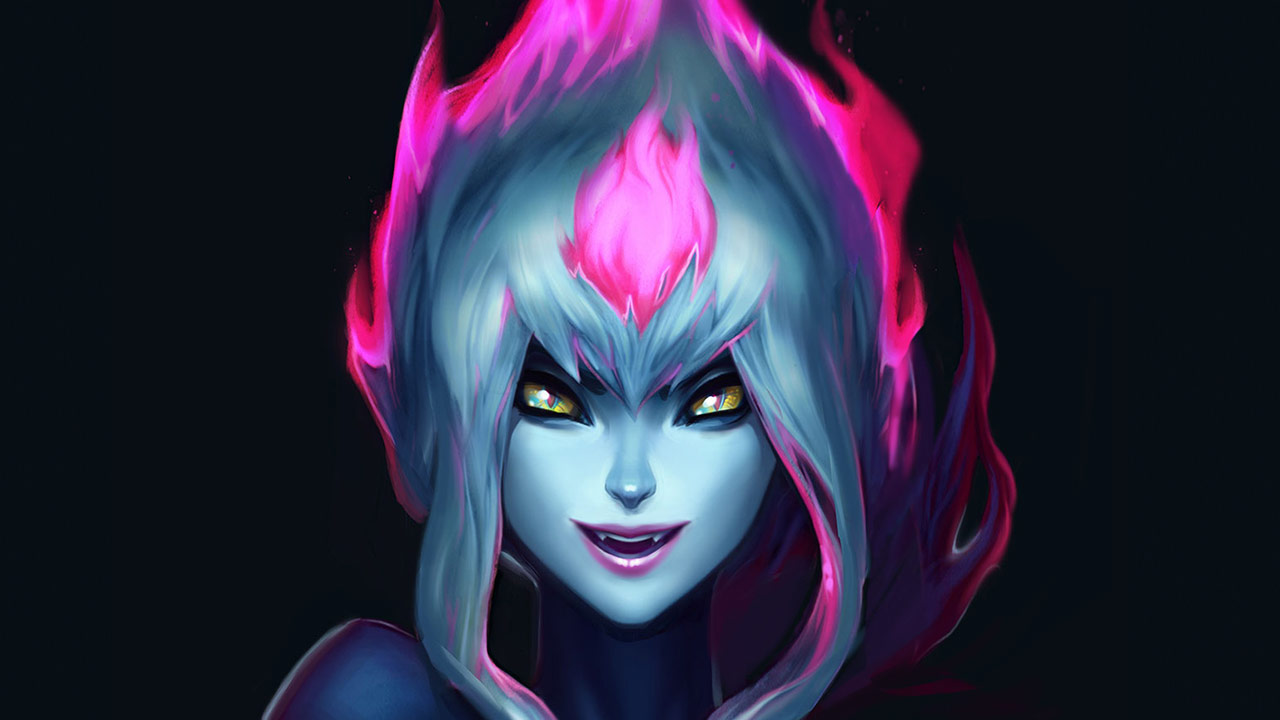 Evelynn’s old identity was… a bit confusing. She was a badass shadow assassin who’d slit your throat and disappear before the blood dripped but was also inexplicably blue and quite scantily clad for a professional hitwoman. Plus, she might’ve been an assassin in the world of Runeterra, but in reality (or at least in-game) she didn’t always play like one.

New Eve is still a shadow assassin, but she’s also a demon. A succubus demon. Who wants to make you very, very happy… before tearing your flesh off.

Born of a Thousand Screams

Evelynn doesn’t want the quick and easy target. For her, the real enjoyment comes from luring in unsuspecting prey, getting their hopes up, and then replacing their exhilaration with torment. “She’s messed up,” says narrative writer John “JohnODyin” O’Bryan. “Evelynn feeds on happy people because she thinks they have more to give.” If someone is already at the bottom, there’s no room to fall, and where’s the fun in that?

A quick and simple death is never enough, though. Evelynn attracts her target with the promise of physical pleasure, striving to elevate them to their absolute pinnacle of happiness, before revealing her true intentions. It’s about seeing the hope in their eyes fade into fear and turning their anticipation into agony.

Evelynn s l o w l y tortures her prey until there’s nothing left for her to take. But even the sweetest kill isn’t enough to sate her hunger, and as soon as the warmth leaves their body, she’s already looking for the next target.

She’ll stalk them in the darkness, waiting for the moment when they’re most vulnerable before using her command of the shadows to once again take a human-like form. Evelynn’s perfected her female facade over centuries, honing her seductive skills victim by victim.

Where does a demon like this come from? “We knew Evelynn had acquired a taste for inflicting pain,” says JohnODyin. “So I asked myself, ‘What’s the point in Runeterra’s history where there was so much suffering, it could’ve created a demon like that?’” The answer was clear: Evelynn was born from the amount of agony present in the most recent Rune War. The Runeterrans’ colossal loss and suffering nourished the young demon, and she’s been chasing that feeling ever since, one victim at a time.

Evelynn’s livelihood hinges on her ability to attract prey and make them feel excited and hopeful, so she’s deliberately shaped her human appearance to do just that. “If Miss Fortune is a 10/10 on the sexy scale, Evelynn needed to be an 11/10. It’s what her character deserves,” says Lonewingy. Exaggerated proportions, dramatic poses, running in high heels—Evelynn’s not constrained by biological limitations.

From the beginning stages of conception, Evelynn never had clothes… well, she never had human clothes. For one, Evelynn isn’t human. She’s a demon imitating a human form, so she uses shadows to mimic clothes rather than dealing with the inconvenience of a physical closet. And two, having Evelynn wear human clothes would make her seem more like a generic girl in a bikini rather than the powerful demon sadist she really is. Eve’s attractive appearance is a weapon—not a fashion choice.

The biggest challenge of redesigning Evelynn was finding a way to communicate her stealth that wasn’t just “let’s make her model semi-transparent for 75% of the game.” Lonewingy went hard in the creepy, horror-inducing designs at first: Spider legs, cracked porcelain skin with shadows pushing their way out, the cavity of a missing eye you could peer into and see three eyes within. “Then the team and I were like, ‘Alright, let’s hold back a bit so players still feel like they’re playing an attractive succubus,’” says Lonewingy. 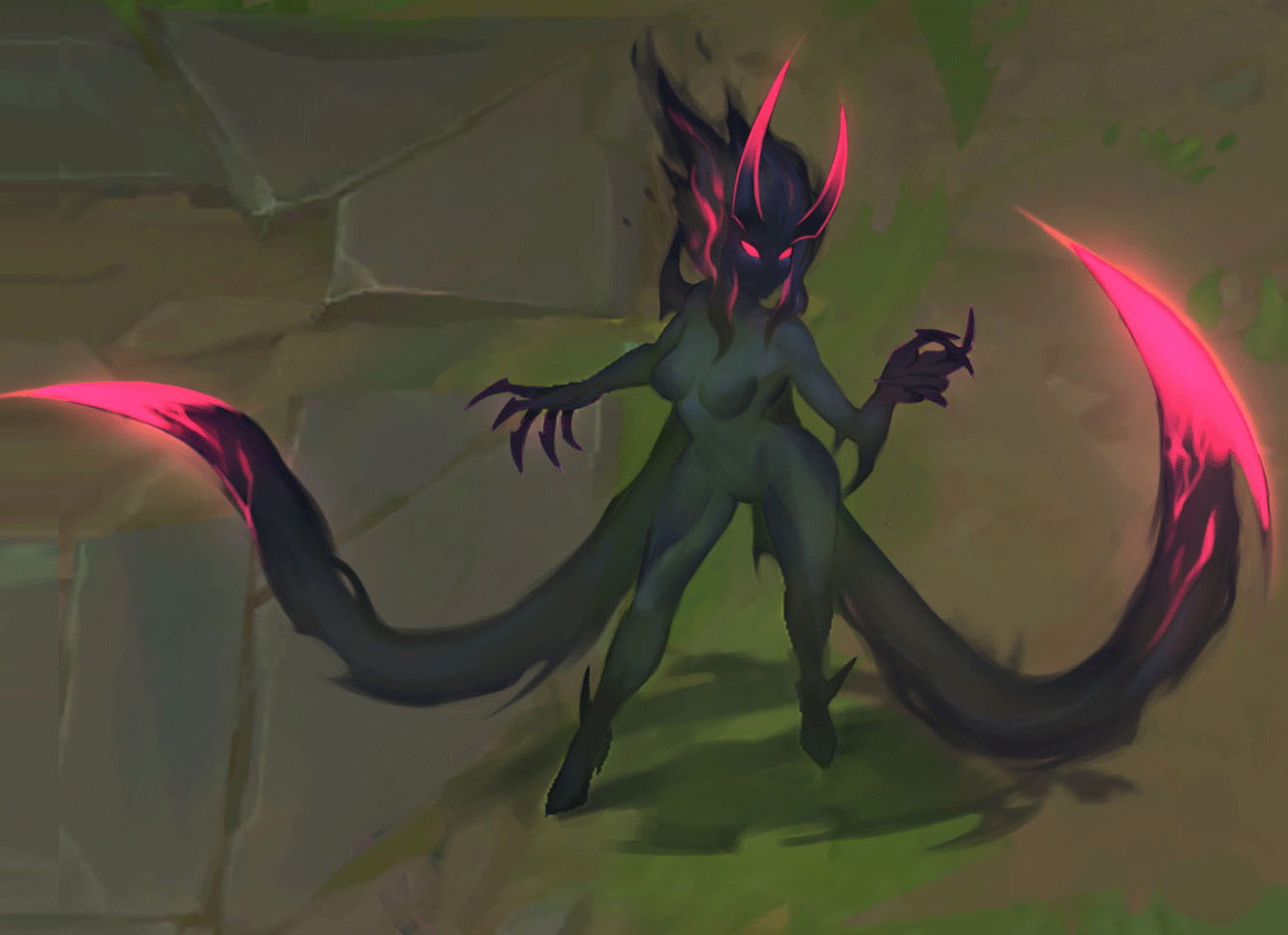 Evelynn’s stealthed (or demon shade) form is kind of how she really looks, but not exactly. It is the form she takes while stalking her soon-to-be toy from the shadows. There’s no need for Eve to hide her demonic lashers or horns in the darkness—she’s free to stalk as she pleases, waiting until her target is most vulnerable before revealing herself as a beautiful woman. “My goal for Eve’s demon shade form was for it to feel like you are the shadow stalker hunting down your prey,” says Lonewingy.

My Pleasure, Your Pain

Possibly the most iconic part of Eve’s kit is her high-uptime stealth. This mechanic was pretty fair in most situations, but it proved to be so frustrating on a jungler that Evelynn was tuned out of the jungle for everyone else’s sake. Still, permastealth was so attractive to junglers and Evelynn fans that they’d always find a way to make it work (Smite+Revive, anyone?), and it became clear that Evelynn was going to stay in the jungle no matter how weak or strong she was. “We knew this was something players really wanted, so we committed to finding a way to implement it that feels good for everyone,” says game designer Stash “RiotStashu” Chelluck.

The main problem with permastealth in the jungle is that it becomes very difficult to track the jungler’s location. Early iterations of Evelynn’s stealth revolved around giving some type of information to her enemies. For example, one iteration was a cloud that covered about ¼ of the map. It moved along a predetermined path throughout the game, and everyone could see it on their minimaps. If Evelynn was in the clouded area, she’d be invisible, but if she was somewhere else, she wasn’t. “These types of mechanics ended up feeling very chore-like for the Evelynn player,” says RiotStashu. “It was a lot to play around but didn’t have a very satisfying payoff.”

Instead of playing the information game, Evelynn’s stealth was delayed until level six. This gives laners time to set up vision defenses, farm, and play aggressively without the paranoia of having an invisible Eve in their lane at level two. But once Evelynn hits six, no jungler (or carry) is safe from her demonic shadow stalking.

The rest of her kit was designed to balance the innate strength of being an assassin who also has a high-uptime stealth, while still giving her the tools to kill people. For example, Eve’s W marks a target, giving them a heads up she’s somewhere nearby, but if they don’t gtfo in 2.5 seconds, they’ll be charmed when she strikes. Plus, the whole thing feels very… Evelynn. Your screen turns pink as she whispers into your ear, and then you wonder if she’s coming from the river, or the brush.

Or perhaps, she’s already right behind you. 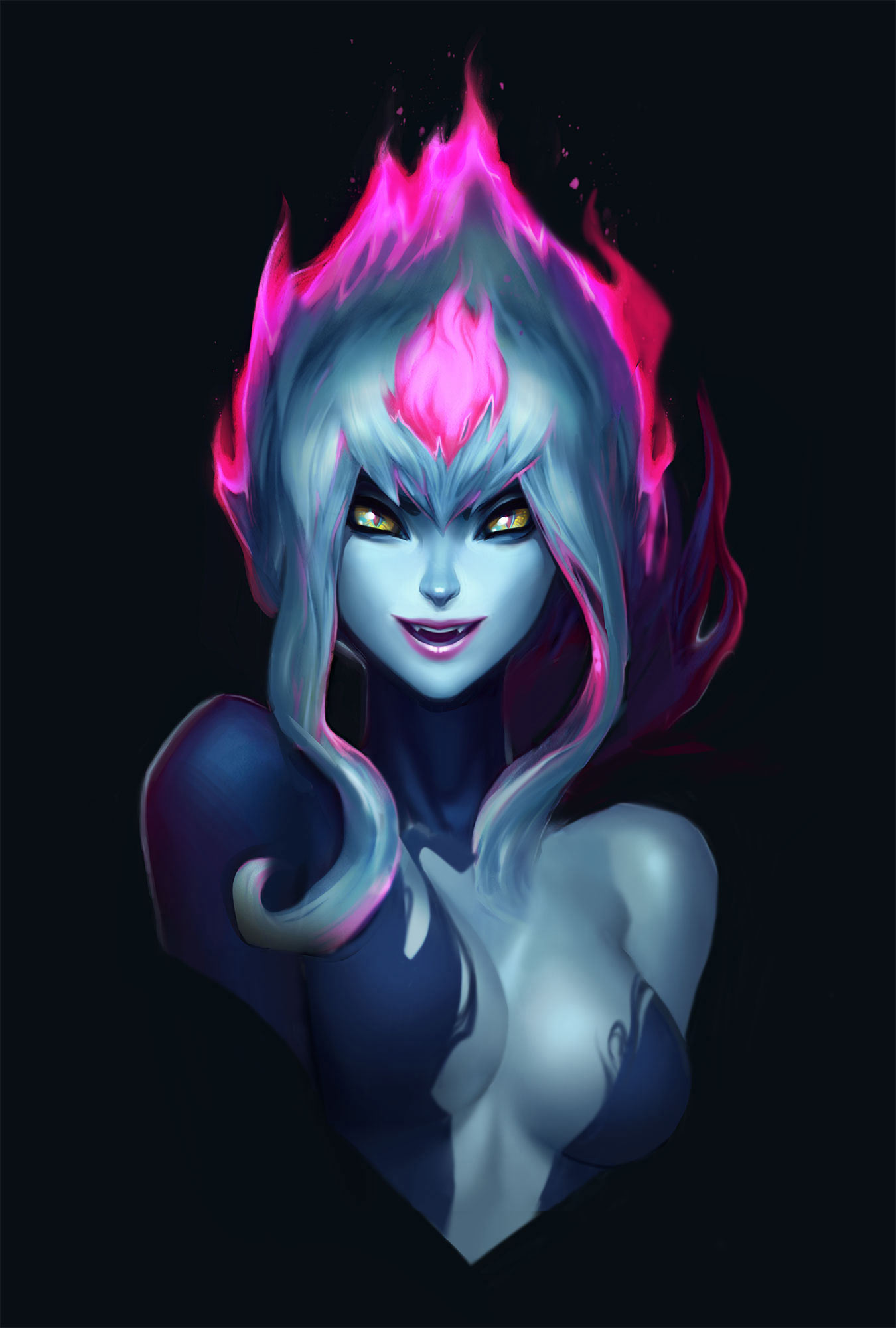