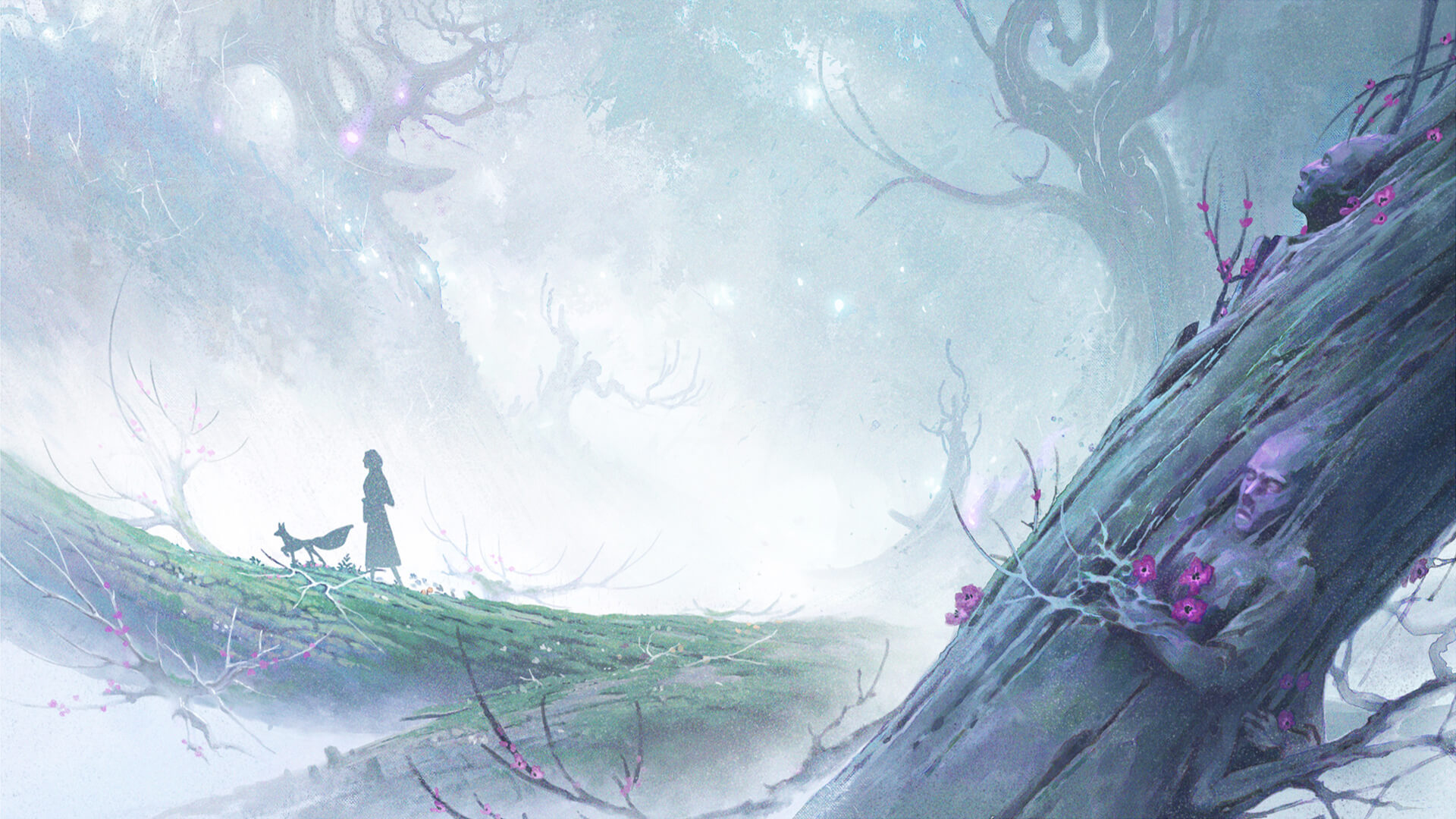 Editorial note: May your past joys bloom and your present sorrows wilt. Welcome to Spirit Blossom! Every Tuesday for the next four weeks we’ll be dropping a behind-the-scenes look into Spirit Blossom, including worldbuilding, Spirit Bonds, the animated short, and sound design.

Spirit Blossom started as a simple pitch: What if we draw influence from spiritual folklore to create a League skin line? As the team started by looking for inspiration in films, anime, and folklore, it soon became clear that this skin line could be much more.

Folklore is deeply tied to history and tradition—it's a way for people to connect and share stories across generations. What would that look like in Runeterra?

The idea blossomed, and soon, other teams wanted in on the unique new thematic set in the world of Runeterra. Flash forward to today, where we have handsome human Thresh, actual fox Ahri, and even more annoying flute-playing Teemo. There’s also an in-depth look into their characters through a visual novel, a shiny reskin of Nexus Blitz, new Legends of Runeterra Guardians, new champions, and... a lot more.

But how did it begin? Where did this idea come from? And who do we have to thank for yet another Ahri skin?

The thematic development team is made up of writers, artists, and producers who handle multiverse worldbuilding, aka creating alternate universes like Star Guardian, K/DA, and Odyssey. They work with the rest of the skins team to create new thematics, reinvigorate old ones, and explore new ways to look at champions.

Every few months they hold a meeting where anyone at Riot can share an idea, and that’s exactly where the seed for Spirit Blossom was planted.

Spirit Blossom’s initial pitch was to take spiritual folklore and apply it to League. Champions would take on somewhat familiar spiritual archetypes, and that would be that. But when the concept artists shared some early exploratory art, the team realized they could push the idea further.

“We were driving on the idea of creating a badass, surreal experience for players,” says associate art director Jon “Riot DrPh8” Buran. “We’ve sort of dipped into the spirit world theme before with Blood Moon, but that was dark, twisted, and blood cultish. We wanted Spirit Blossom to be elegant, whimsical, beautiful, and unnatural.”

The team initially started with a world defined by absolutes: There were good and evil spirits. The good spirits sort of just existed, living in this beautiful world for all eternity. But the evil spirits lived up to their name. Like, really. At one point players would witness an evil spirit feast on the flesh of some unfortunate new resident of the spirit realm. And while that certainly was an interesting take, good versus evil was something we’ve already done.

“We didn’t want this to be another versus event, so we had to make sure there was no overarching tension in the spirit realm,” explains thematic development narrative lead Jared “Carnival Knights” Rosen. “It was important that this world and its inhabitants had a blue-and-orange morality, rather than black-and-white.”

This blue-and-orange morality led to the version of the spirit realm we have today. The two sides of the spirit realm aren’t necessarily in conflict. Instead, they coexist in a world in which they’re inherently connected. It’s a balance between peace and passion, and the spirits all exist somewhere on that spectrum. 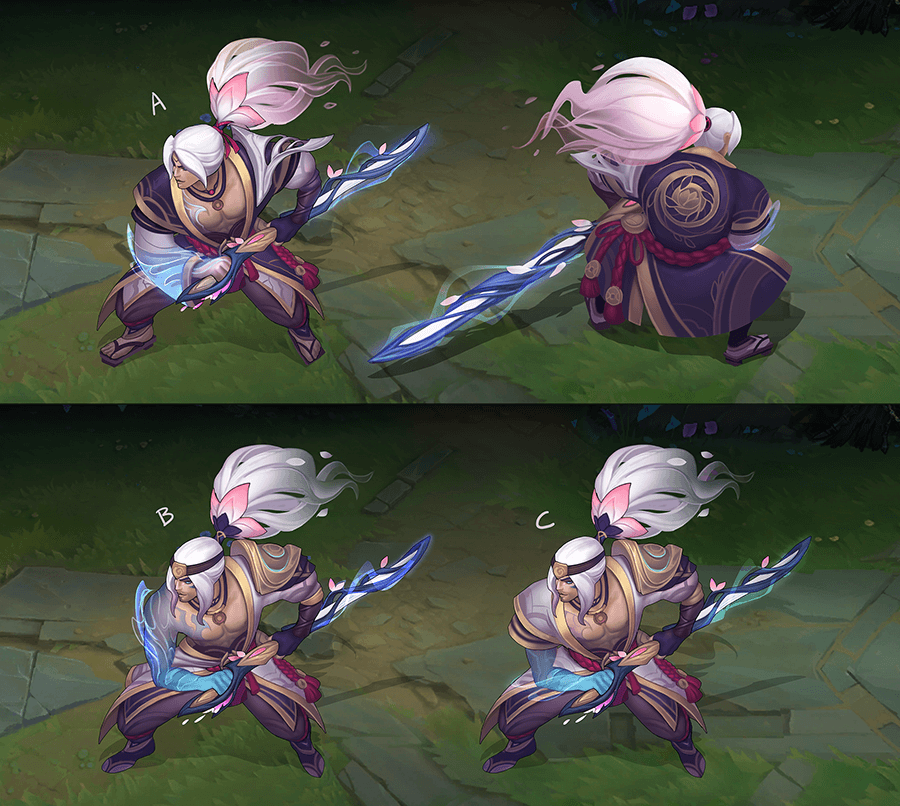 The more peaceful spirits, or the kanmei, have found peace in the afterlife and reside in the spirit realm for all eternity doing... well, whatever they want. Then there are the more passionate spirits, the akana. Unlike the kanmei, they haven’t found their peace and obsess over the choices—or mistakes—they made in their lives, causing them to take on a more obsessive and chaotic nature.

For a while, the world of Spirit Blossom was designed to be an alternate skin thematic, like Star Guardian or PROJECT. But eventually, a new idea took root: What if we made Spirit Blossom canon Runeterran lore?

We’ve recently tried matching the release skin for new champions with a thematic that makes sense for their character. Aphelios is a Lunari, so he received a Nightbringer skin. Sett’s a punchy guy, so he got Mecha Kingdoms. Lillia’s literally a flower from Ionia, so hers is Spirit Blossom.

“Originally Spirit Blossom was just going to be a skin thematic for Lillia and the other champions, but people really liked what the team had created,” says Carnival Knights. “We were discussing ways to make the event a bigger deal because more teams kept joining in—people were working on other Spirit Blossom content, Legends of Runeterra, and so on. That’s pretty much why we decided to make it a canonical thing within Runeterra. It just kind of... happened.”

That meant the world needed to be fleshed out to fit in Ionia. The team eventually landed on the concept of a Spirit Blossom Festival. The festival signaled the blossoming of an actual spirit blossom flower, and is a time for Ionians to commune with their deceased loved ones, celebrating their peaceful passing into the afterlife, or mourning their inability to rest. 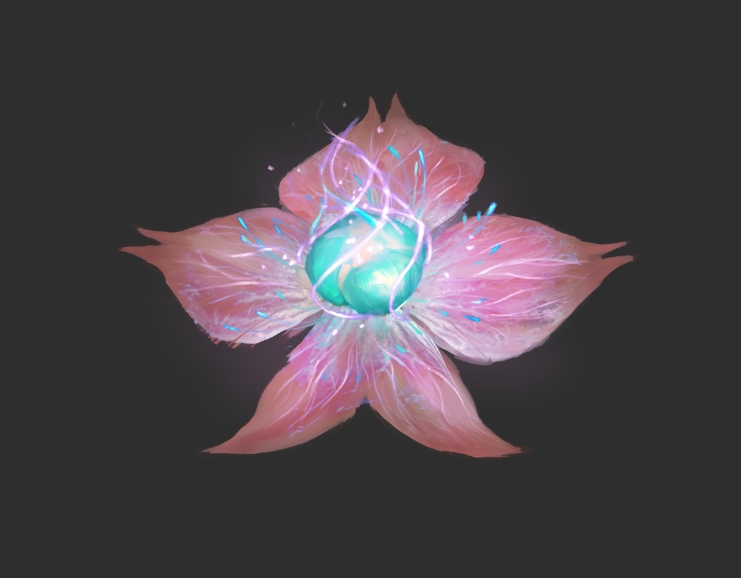 Narrative writer Michael “SkiptoMyLuo” Luo explains that Ionians have different traditions and rituals with the flowers. “The most prevalent is to place it on the tombstone of a deceased loved one. If it blossoms, that means they’re at peace, and their spirit appears allowing you to speak with them for a little while. But if the flower wilts and nothing appears, then that’s a sign the spirit has been corrupted or cannot rest in peace.”

Cool, great. We now know the lore behind the festival. But how the f*&^ do we make these skins? To figure this out, the team decided to draw some further inspiration from Ionia. 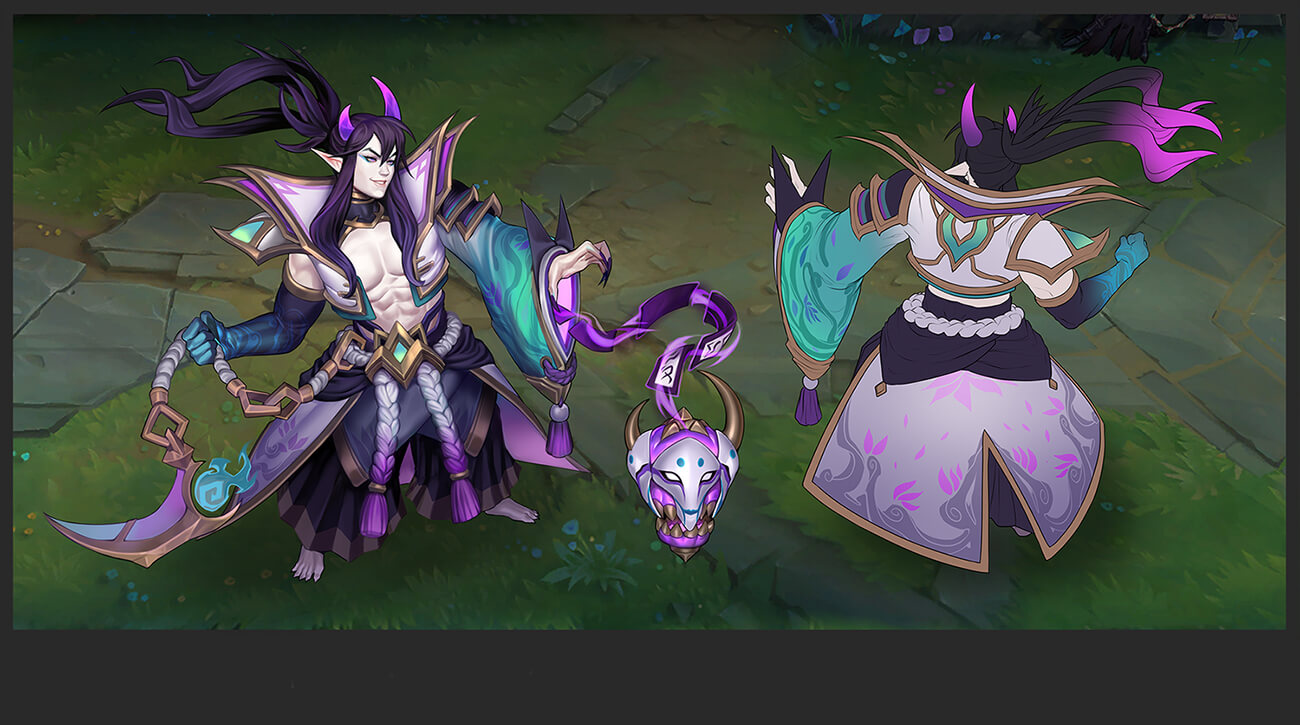 Ionia is an inherently spiritual place. There are spirits within the rocks, the trees, everywhere. This is where the team found inspiration for the Spirit Blossom skins. Each champion’s skin embodies things like nature, salvation, heroism, atonement, obsession, hate, despair, loss, temptation, and death. 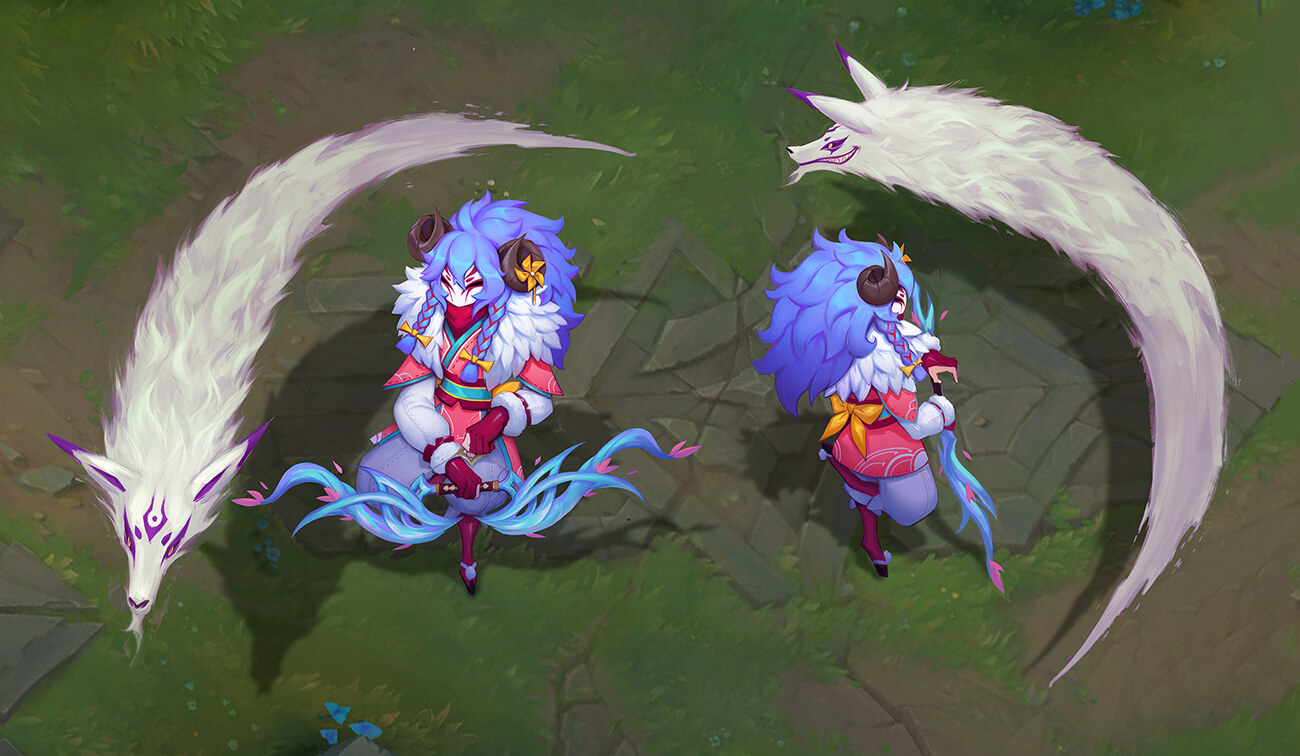 “But Riot, this doesn’t make any sense. You literally just said Spirit Blossom is canon lore. Is Thresh a hunky spirit now? I thought he was from the Shadow Isles.” Yeah, you’re right. This won’t work.

“The Spirit Blossom skins represent the oral traditions and plays around this holiday in Ionia. So the festival itself is canon, but the skins are folklore,” says SkiptoMyLuo. “You’re going to the Spirit Blossom festival to commune with your loved ones. But you might also go see a play with the Spirit of Obsession fighting the Spirit of Salvation. People get dressed up. It’s a celebration.”

The idea is that the skins are costumes that could theoretically be bought at the festival. Thresh just represents the Spirit of Obsession... with some purple body paint and a nice outfit.

Bringing the Blossom to Players

“If Spirit Blossom as an event—the skins, rewards, gameplay hours, cinematic, everything—was put into a gift box, our publishing team would be responsible for designing and packaging that gift box in an elegant way,” says publishing creative director Anton “Riot Manton” Kolyukh. “We tried to design a visual style that honors the source material, but also blossoms outside of those bounds into something original and interesting for Eastern and Western audiences.”

“Words like whimsical, spiritual, beautiful, unnatural, and mystical were being repeated a lot, so I used that to create references initially,” Riot MrParkinson explains. “Spirit Blossom is all about the afterlife, and this ethereal world where it takes place. I noticed that Yasuo’s art had folklorish patterns on his shirt, so I used that to create some geometric patterns and shapes. I combined that with natural textures, brush strokes, and colors. And that’s where we ended up.” 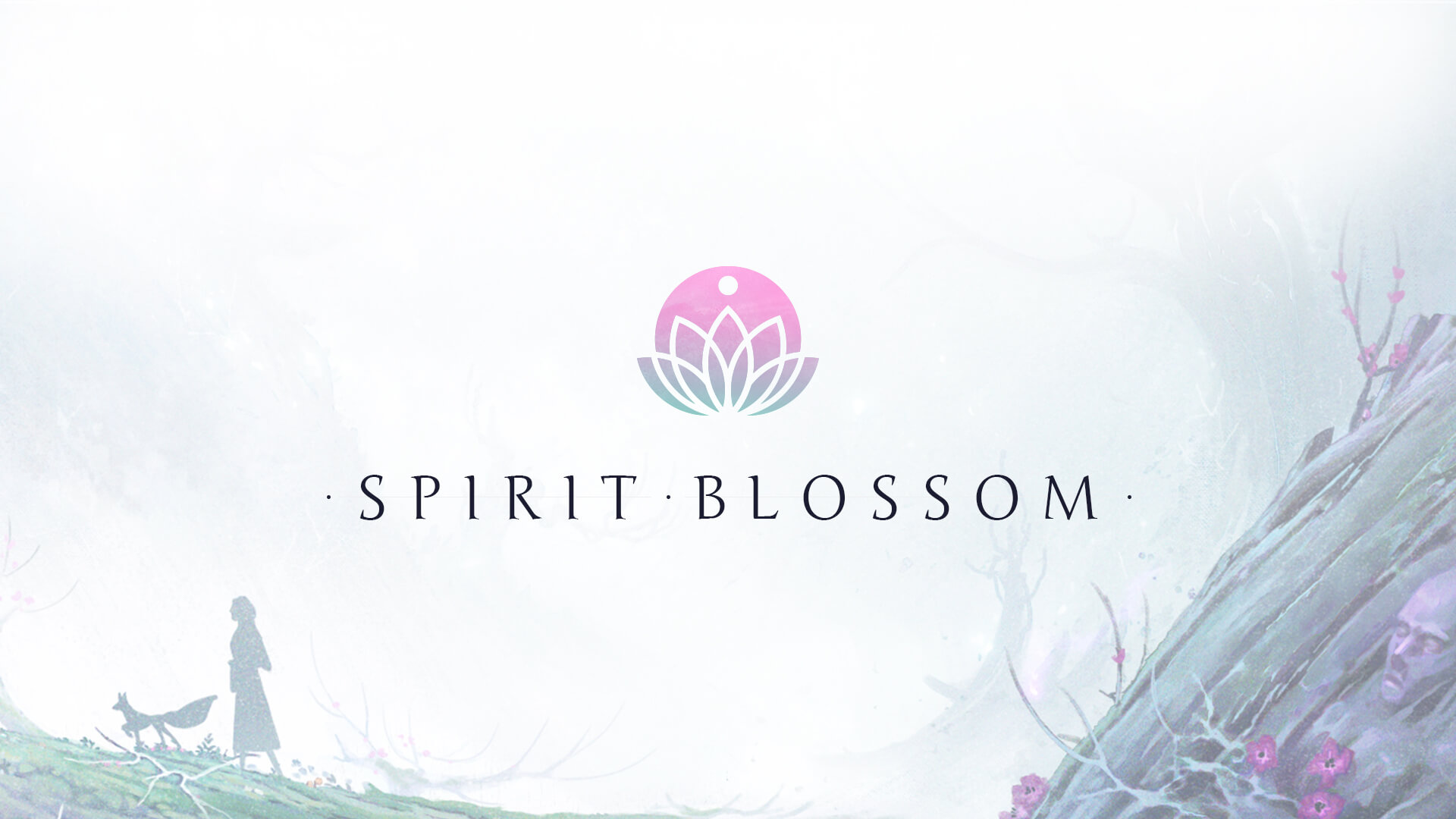 If you’re interested in learning more about the visual design process for Spirit Blossom, check out the deep-dive.

The Future of Ionia

So there it is. Spirit Blossom. It’s not an alternate universe. It’s an in-lore thematic with folklore skins. And we hope you love it. Oh, and there’s one more thing you should know...

“This year’s Spirit Blossom festival is particularly special,” says Carnival Knights. “The war with Noxus ended very recently and there are lots of battlefields that haven’t been properly scoured. Those Ionian war dead haven’t been properly buried. So across all of Ionia there’s an influx of azakana.”

Wait. What are azakana? Where else have we seen that word… 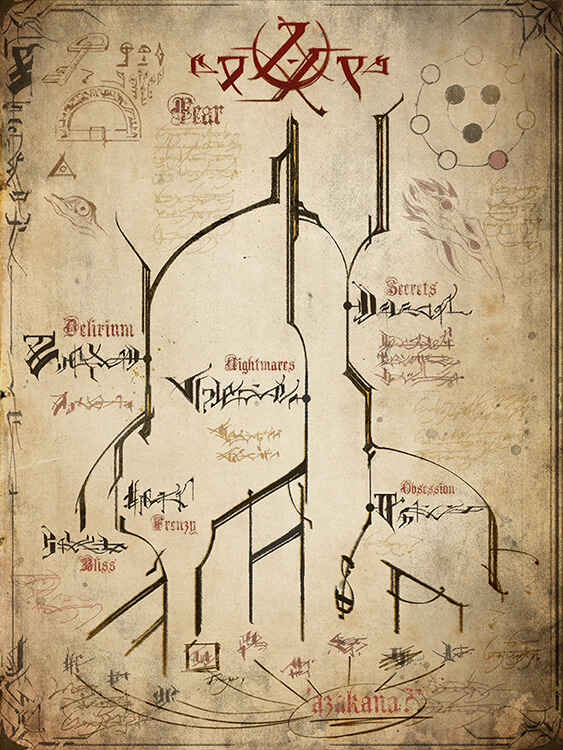 “Azakana are sort of parasitic minor demons, as they’re not full demonic entities like Evelynn or Fiddlesticks,” Carnival Knights explains. “They hone in on a single person or spirit’s fear or shortcoming, and just absorb the negative emotions until they kill the host. Then they become a full demon or move onto another host that has a more rich flavor, so to speak.”

“It’s kind of this horror undertone of the whole festival,” Carnival Knights continues. “The azakana are growing in number, and there’s a chance that in the very near future Ionia will be overrun with demons. No one outside of the Kinkou Order is dealing with them.”

If only there was someone who would.