One of our goals with preseason's item changes was to increase the strategic options and choices available. The changes have settled a bit and we’ve followed up on the most pressing issues, so we're sharing a rundown on every class to see where we've achieved our goals and where we still need to improve.

For mythic items, our goal is that “no champion chooses the same mythic in 75%+ of games.” The percent is a bit arbitrary, but we feel it represents a champion having viable options to think about each game. You might assume it'd be "each champion chooses each of their mythics 33% of the time", but we think that’s unrealistic and in some ways a worse experience. Having a most common pick is fine as long as other options are the right pick frequently enough. We don't think we'll see 100% of champions meet this goal, but we'll always try to move toward it as we iterate and improve the game.

In patch 11.3, 88% of champions hit the goal, which we're very excited about. This is a dramatic increase from historical levels: In 10.22 (the patch before preseason), only ~20% of champions would have been successful.

NOTE ON THE GRAPHS: Our data tool only uses about a dozen colors so we had to recolor double-ups. Only items with labeled pickrates (5%+) are guaranteed to be the right color, more than enough for a mythic diversity snapshot, but if you use the graphs as deep-dives the unlabeled bars may be misleading.

Some champs have lower total mythic pickrates because they don't complete a mythic every game. This typically happens when they build a legendary or two first, and games end before they finish a mythic.

21 hits, 3 misses. This is one of the classes with richest choice options, with many champs seeing significant pickrate on 3 or more mythics.

Don't sleep on: Kraken Slayer MF is very good into tankier “front to back” team comps. 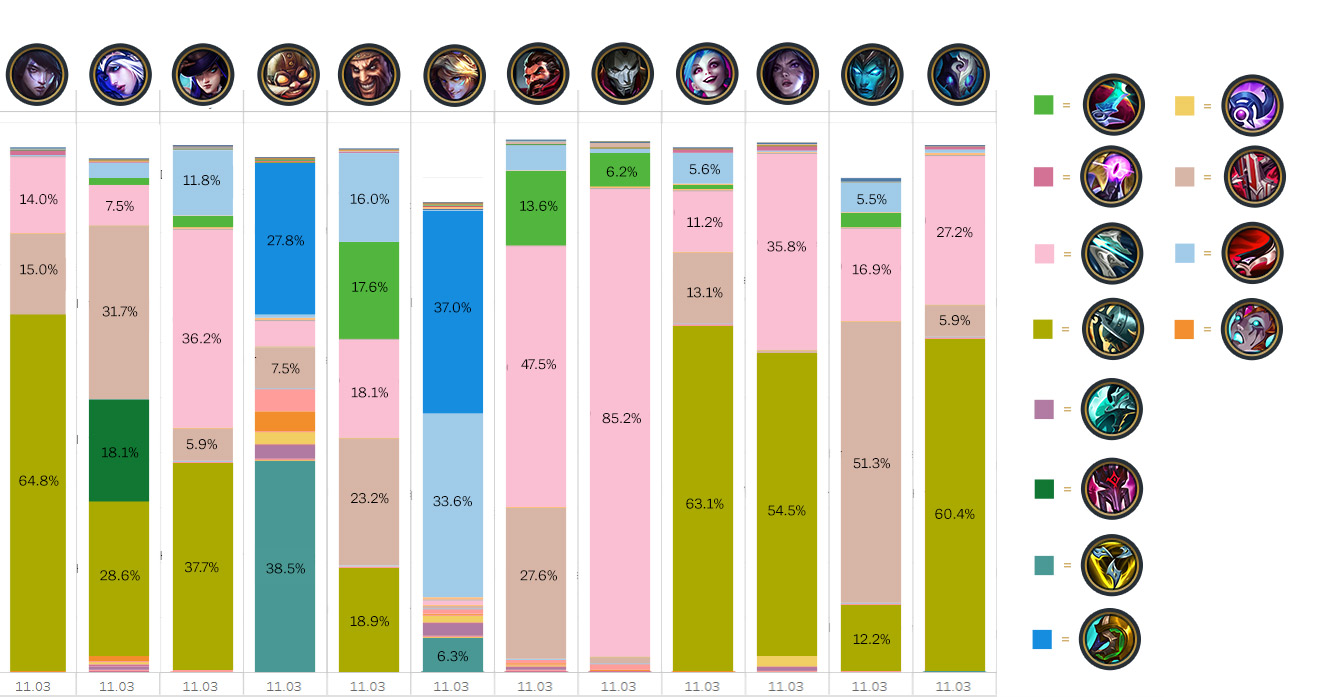 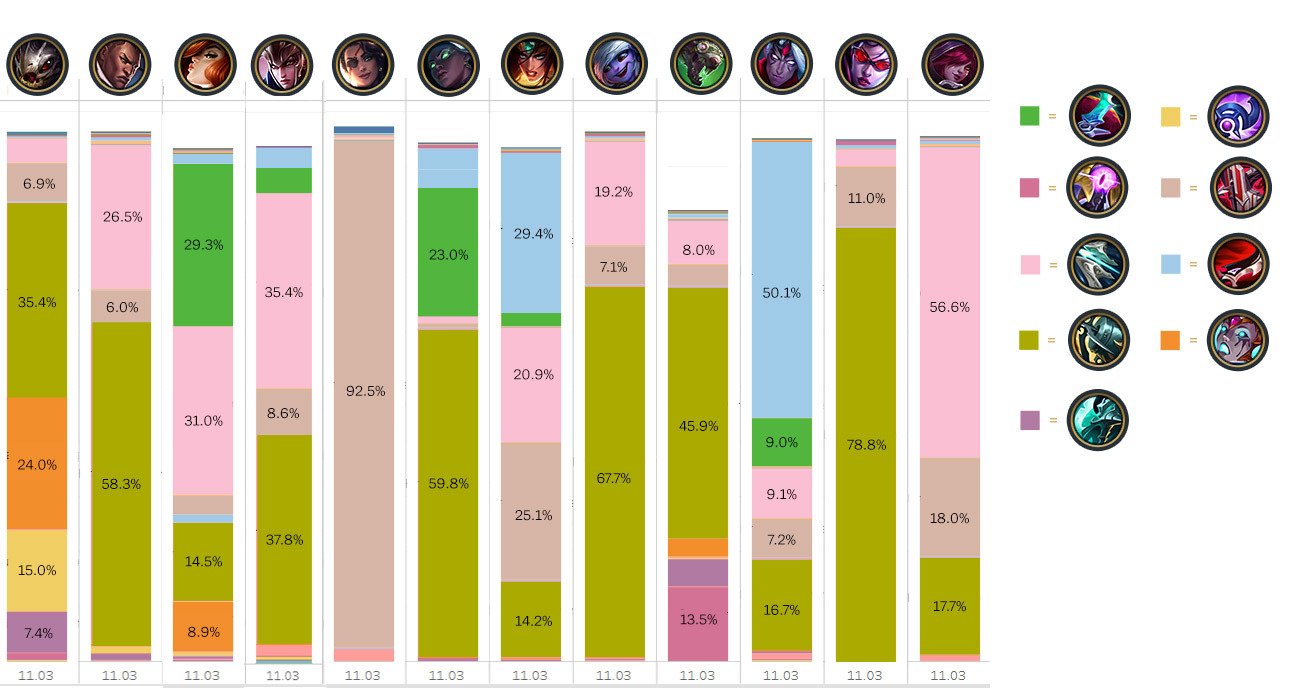 9 hits, 1 miss. Duskblade is clearly the most appealing option even though it's not actually the most powerful in all cases. Even then, only Kha'Zix is hardbound to it, though Nocturne, Pyke, and Qiyana are close to the line as well.

Don't sleep on: Both Prowler's Claw and Eclipse are strong options for most of these champs, especially in the right situations. 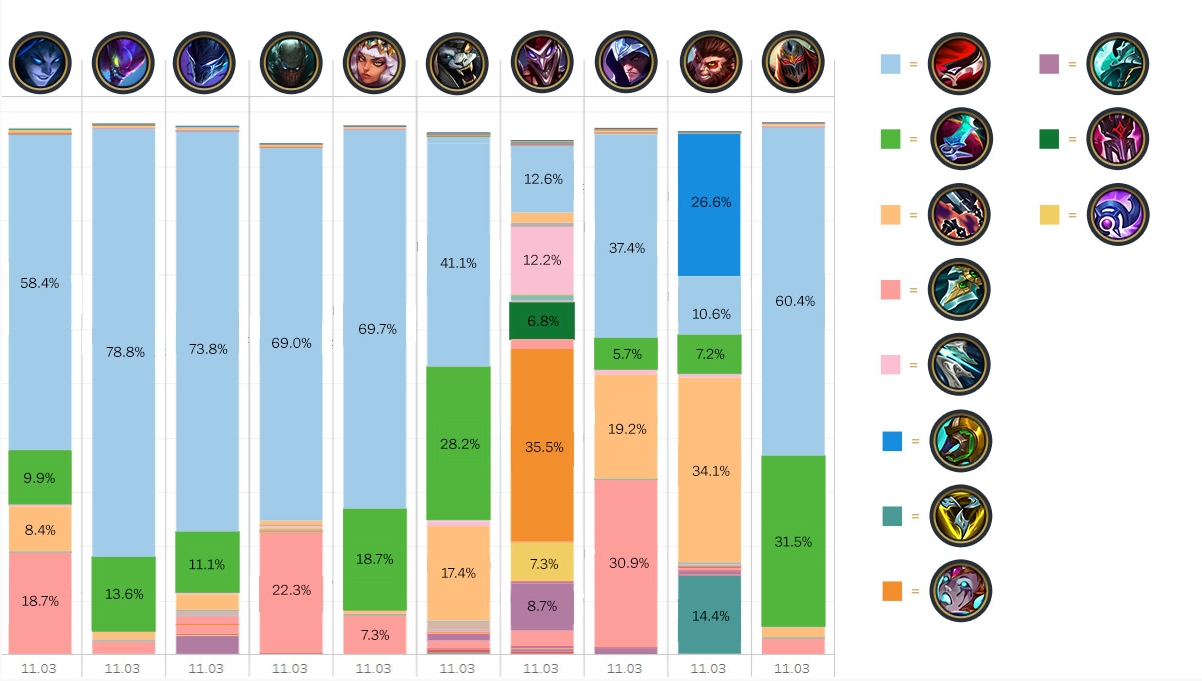 14 hits, 4 misses. There’s a pretty good balance between Rocketbelt and Night Harvester for most AP Assassins, and the few that can dip into mage items have even more choices.

Riftmaker fills a very strong niche for fighters and sustained damage dealers, but could potentially be widened a bit to provide an off-build for more champs.

Don't sleep on: Night Harvester Ekko is comparable and often better than Rocketbelt. Also Rocketbelt is quite good on Diana Jungle.

27 hits, 6 misses. This is the class we think is farthest off. Even though only six are hardbound, many are close to it. Primarily this comes from two causes:

Don't sleep on: Other than the obvious “Everfrost just got buffed,” Liandry’s is legit on Ahri, Annie, Orianna, and Vel’koz.

31 hits, 5 misses. In terms of strategic choices, we’re pretty happy with how the fighter mythics turned out. Multiple items with clear reasons and situations to pick are exactly the “right choice in the right game” dynamic we wanted.

A few Juggernauts like Garen and Darius are a bit too confined to Stridebreaker, so there may be some small work to do on this issue down the road.

Don't sleep on: Stridebreaker Aatrox and Fiora. Makes sense considering how important positioning is for them.

24 hits, 0 misses. At the start of preseason, farming and support Tanks were in the worst spots in terms of item diversity. In particular, Sunfire was the “generic damage” option while also having the most generically usable mythic passive (Ability Haste). This made it a dominant choice that worked in every situation.

Now, Tanks are the only class with no hardbinding. We were able to move from only 50% to 100% of our goal with both balance changes and some light reworks of the tank mythics to give them more clear and viable niches. 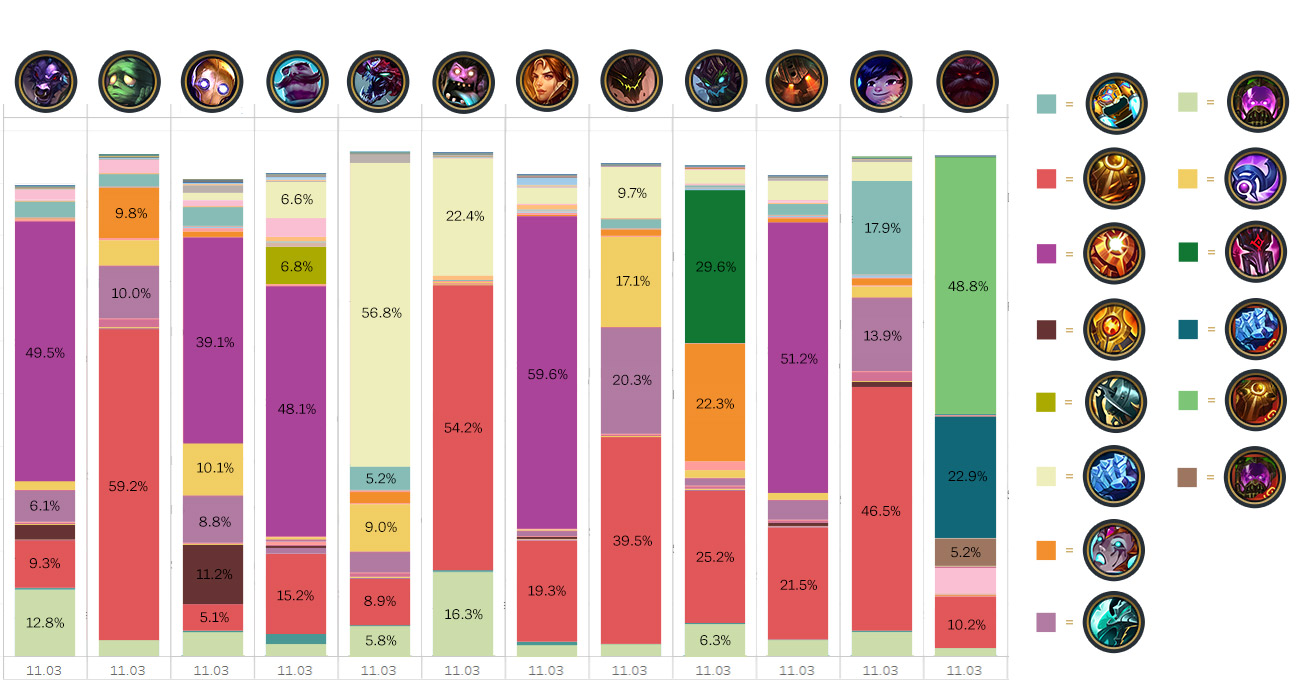 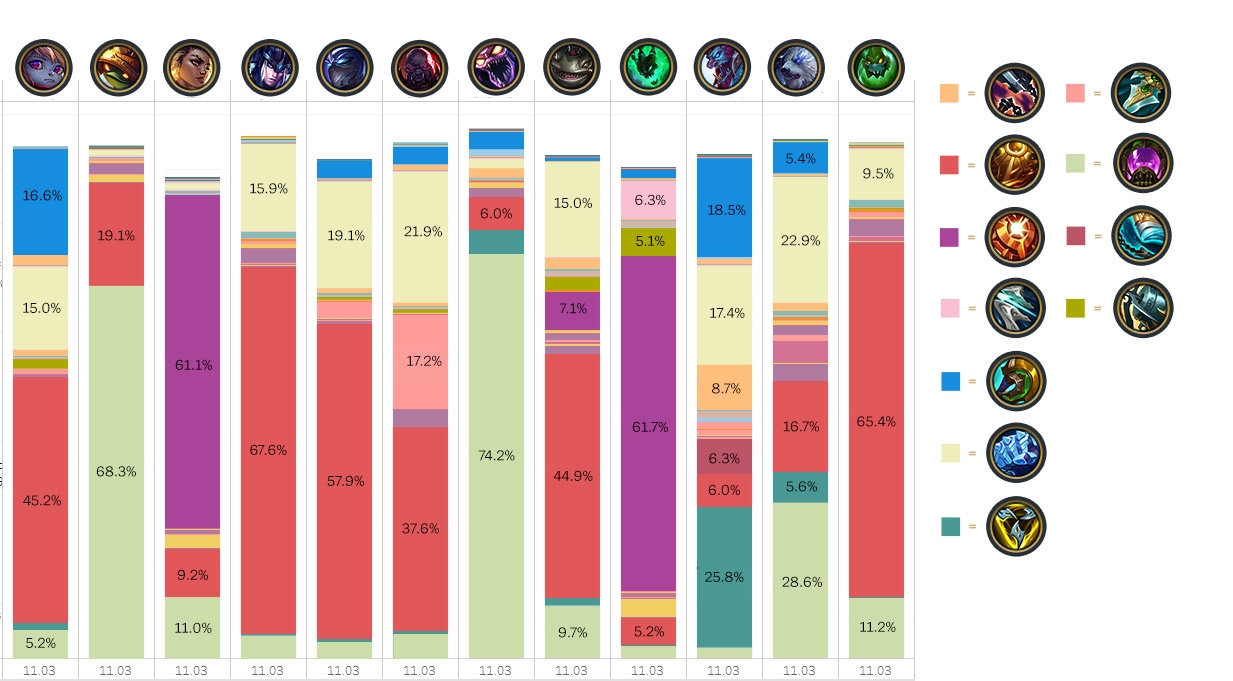 10 hits, 1 miss. Enchanters show a strange trend where Moonstone Renewer, Imperial Mandate, Shurelya’s Battlesong, and Locket of the Iron Solari are all broadly viable in terms of power. Despite that, players gravitate heavily toward Moonstone and Mandate even when Locket and Battlesong are just as powerful for them.

Don't sleep on: Locket across the board, this item is killer into bursty teams. 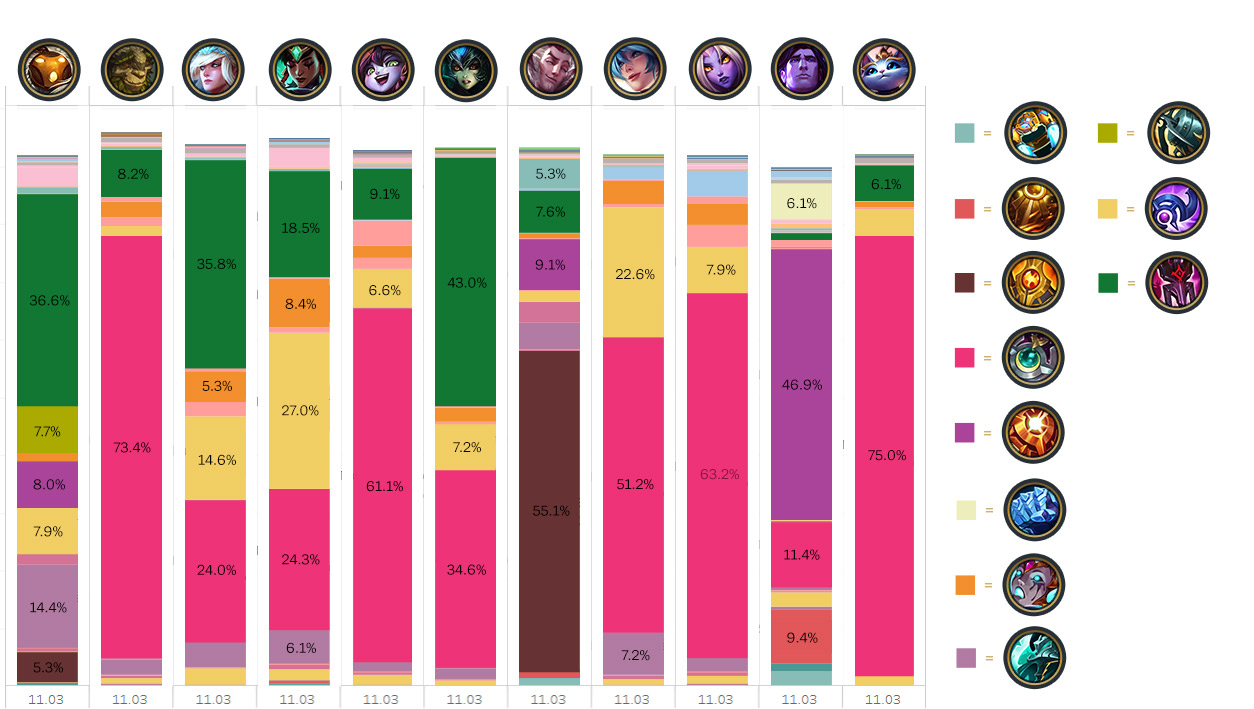 Legendary items require a different approach, but the high level is still the same: Each legendary slot should offer strategy and choice depending on the game state.

We look at factors like pick rate, win rate, pick order, and others to determine which Legendaries are over and underperforming. One particularly useful method is to see which items dominate the second item slot.

Here are the most and least purchased legendaries. Many recent changes have targeted strong (Zhonya’s) and weak (Silvermere, Cosmic Drive, Serpent’s Fang) outliers to widen the range of options. 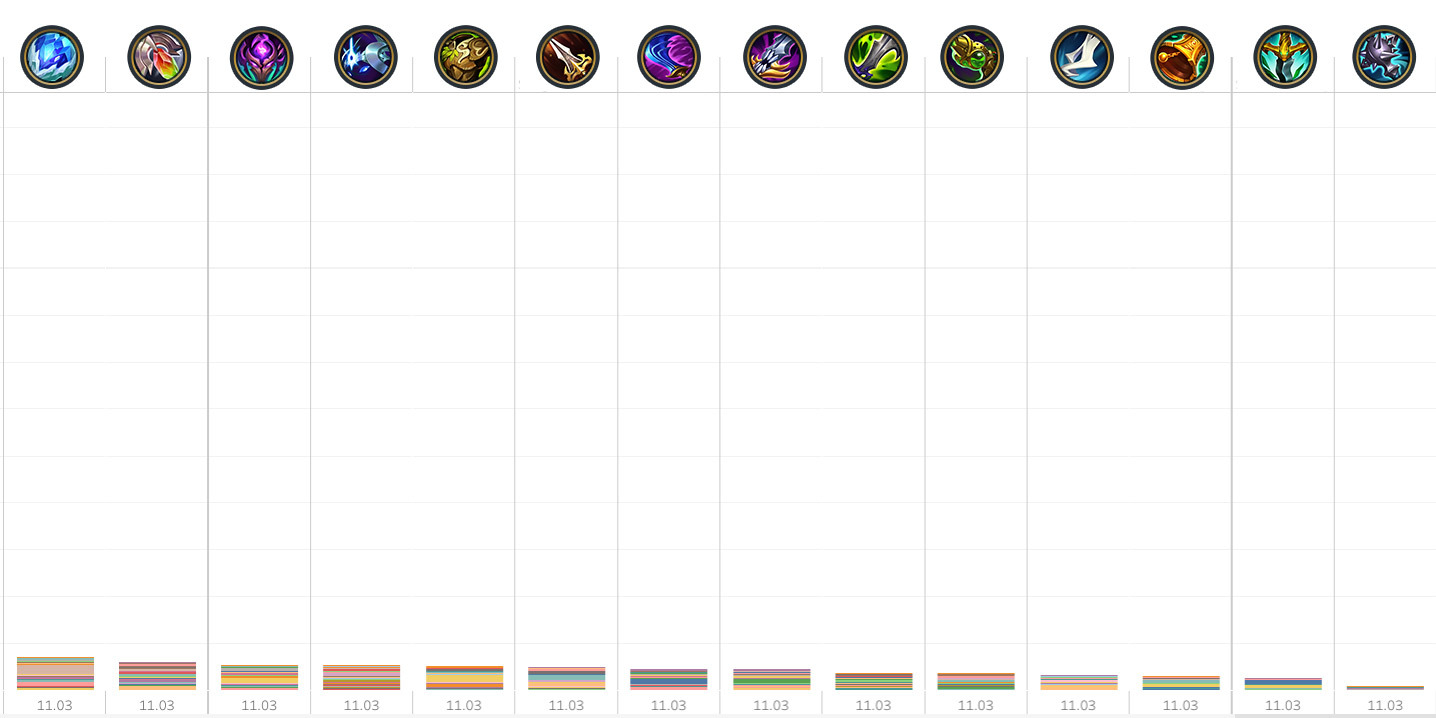 Hopefully this deep dive was interesting and helps you all understand our approach and future goals for the item system. Thanks again for playing League with us. Stay safe out there.