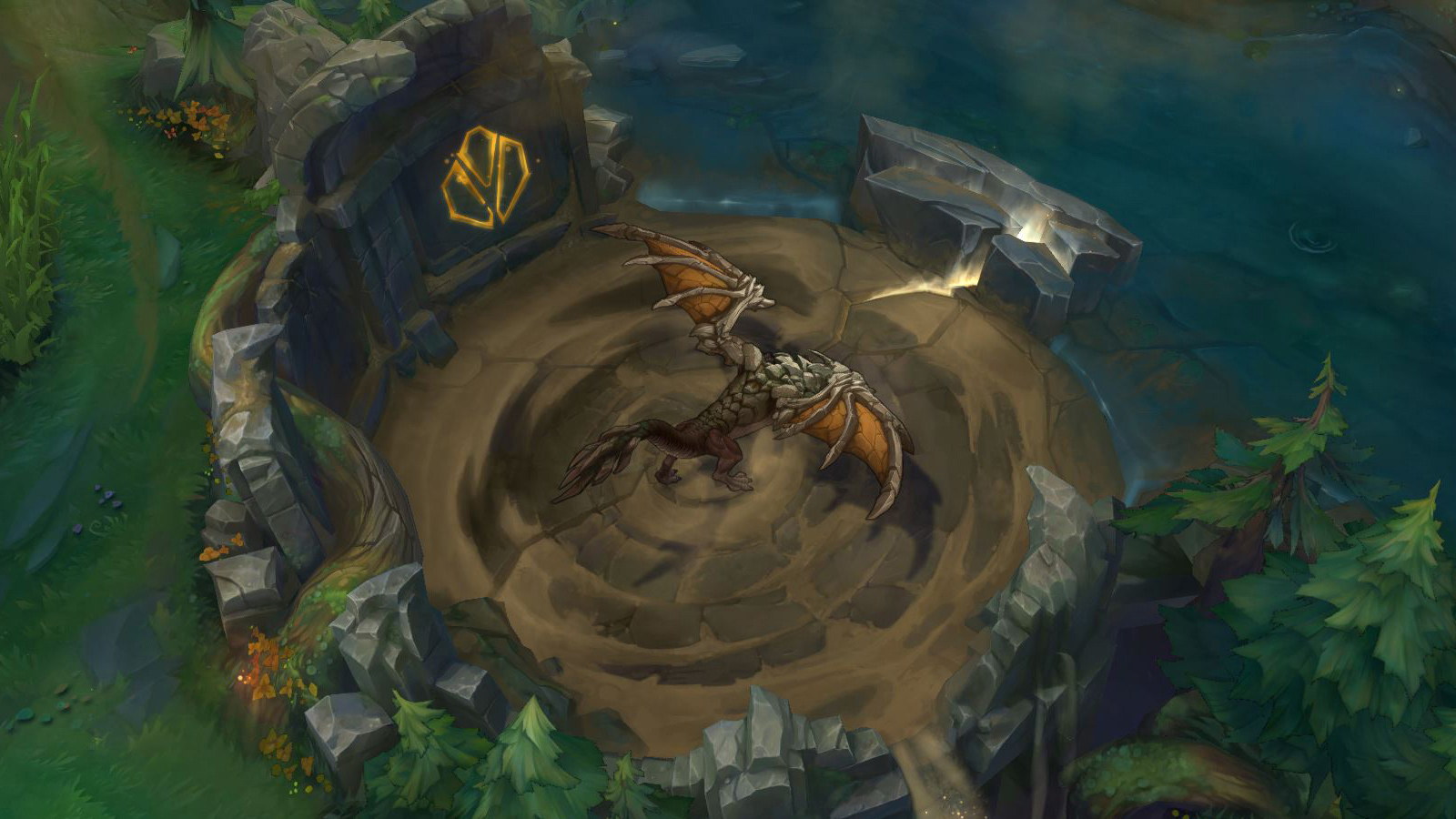 Stop in for a rundown of this preseason's gameplay changes!

Welcome to Preseason 2020: Rise of the Elements! In our high-level goals blog, we revealed that this year’s preseason would be transformative but left the details hiding in the fog of war. Then we shared a video preview during the 10th Anniversary Edition of Riot Pls. And now, the full reveal is here.

GOAL: Every game, Summoner's Rift presents a variety of distinct and memorable environments for players to master.

Rise of the Elements will bring SR to life as the primal magic of the Elemental Drakes changes the landscape each game. The third drake transforms the Rift before it spawns and after that, its element will be the only one to spawn for the remainder of the game.

The Infernal Drake sunders the Rift, creating new pathways through buff camps and burning away their brush. In addition, the dragon pit itself becomes the Infernal Drake’s molten domain, crumbling the walls at the mouth of the pit. New paths make opportunities for a quick flank or sidestep that your opponent isn’t expecting. 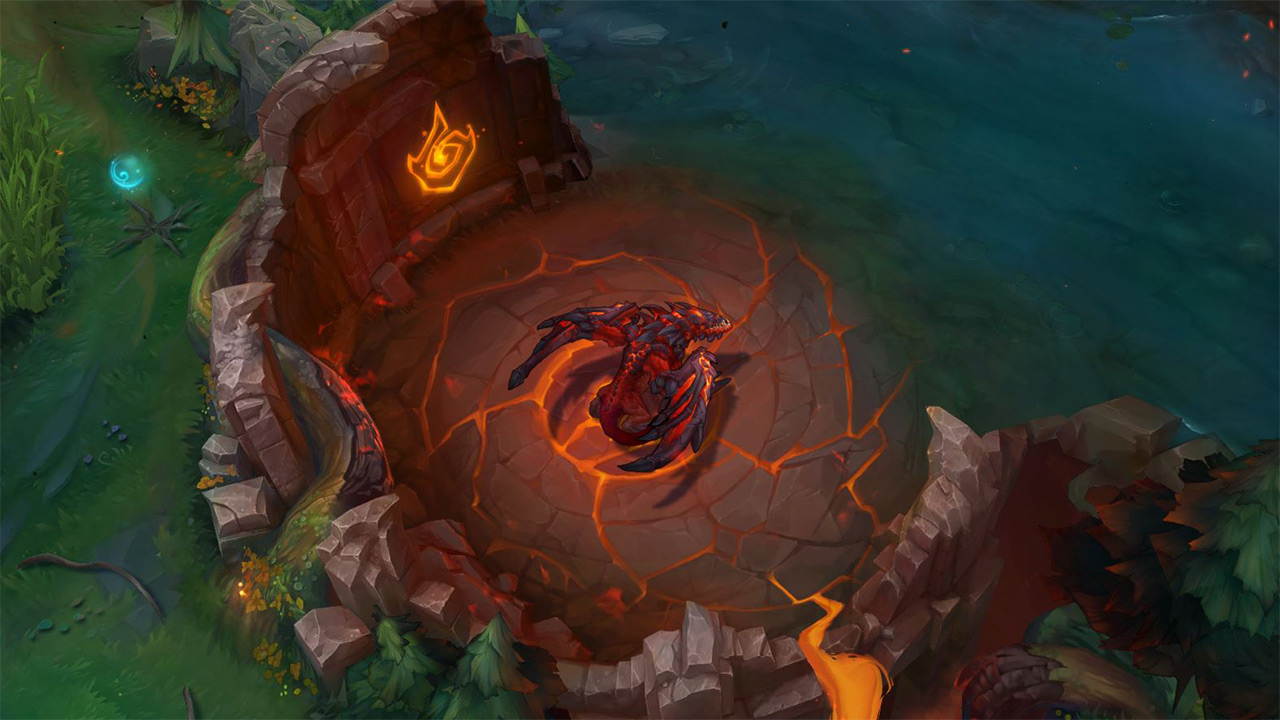 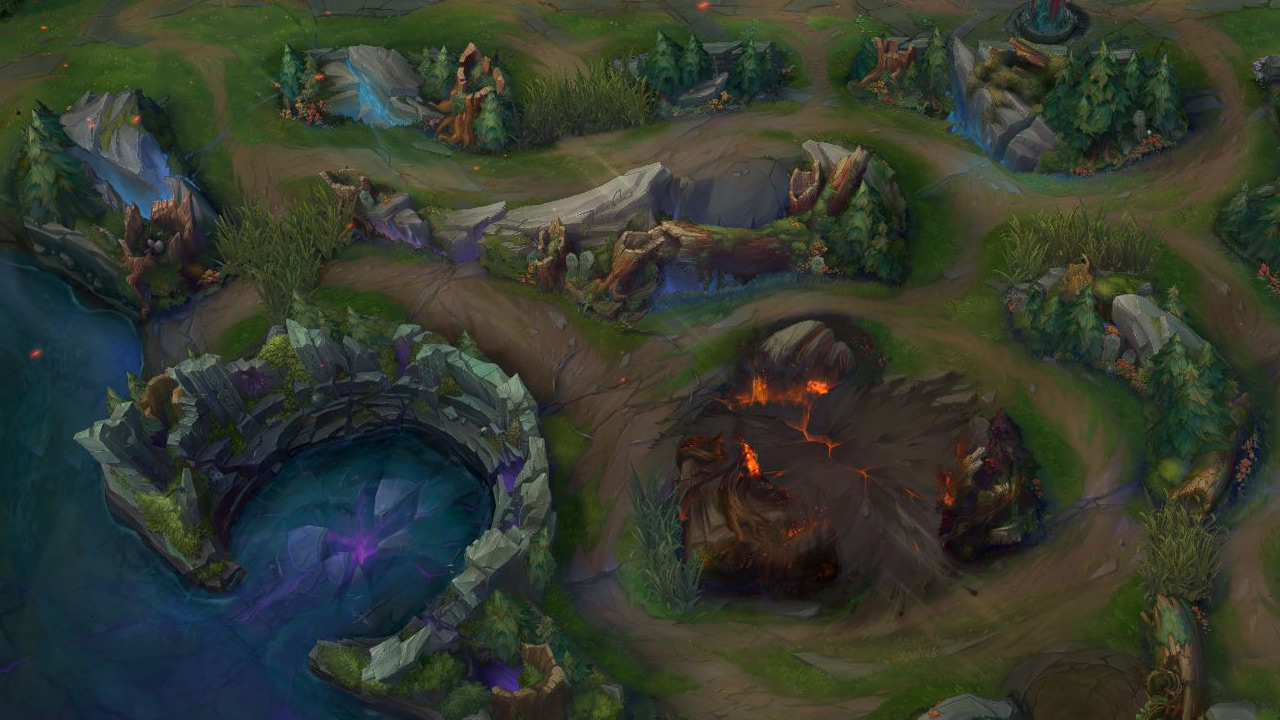 The Ocean Drake brings new life to the Rift, causing existing brush to expand, fresh patches of brush to grow around the dragon pit, and the environment to flood with pools of water. In addition, Honeyfruit plants sprout up in each jungle quadrant. Sneak around the jungle or look for a new ambush opportunity. 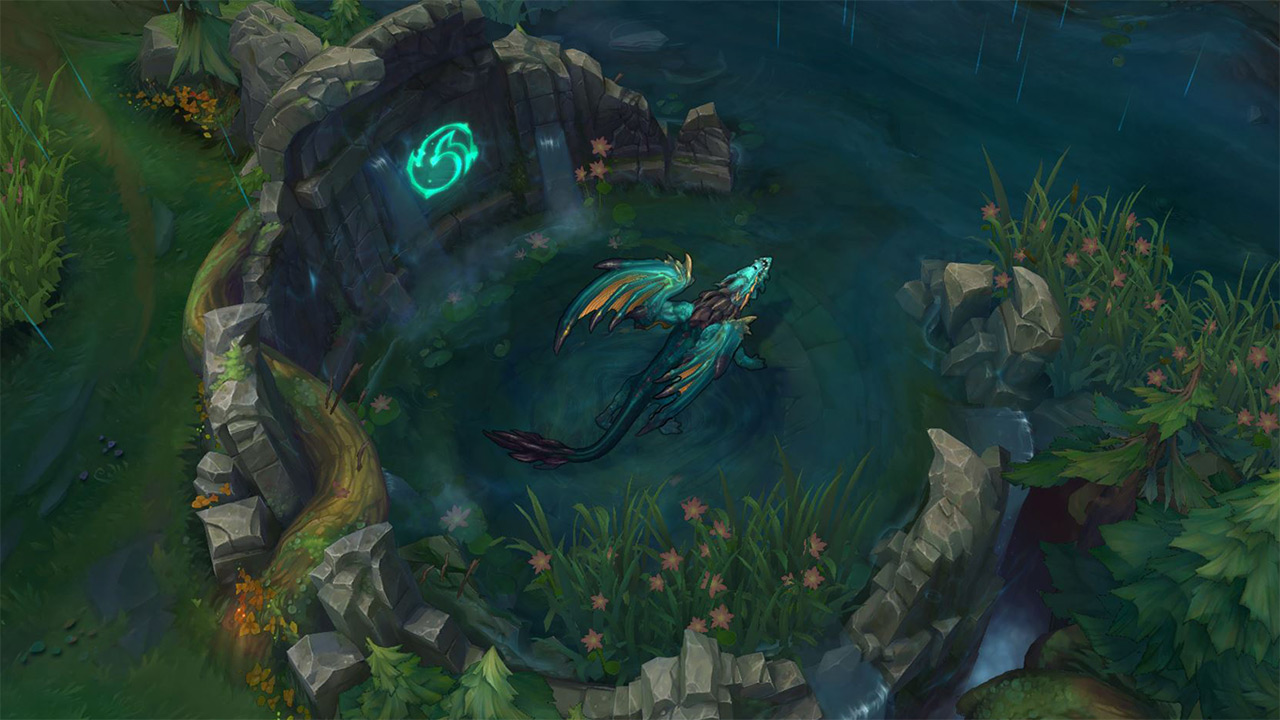 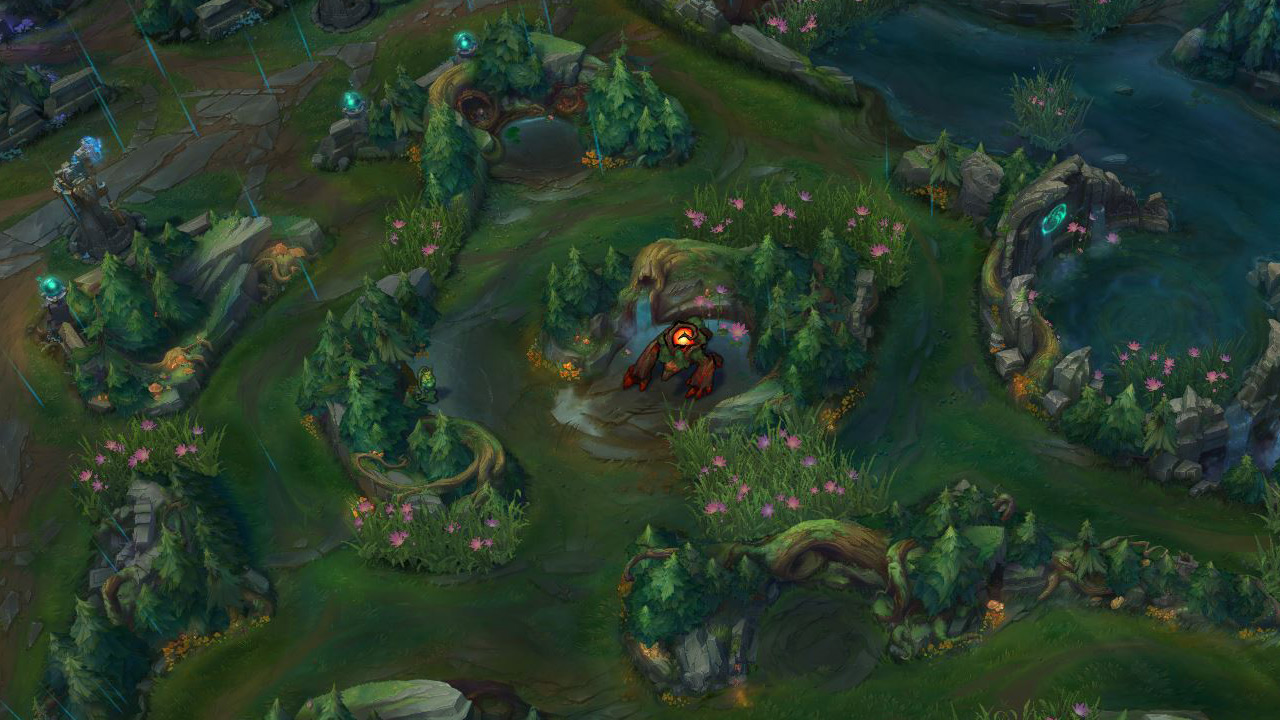 The Cloud Drake’s power spawns air currents flowing through the jungle and dragon pit, speeding up champions in the vicinity. Dodge skillshots or make a swift collapse on your enemies trying to sneak a far away objective. 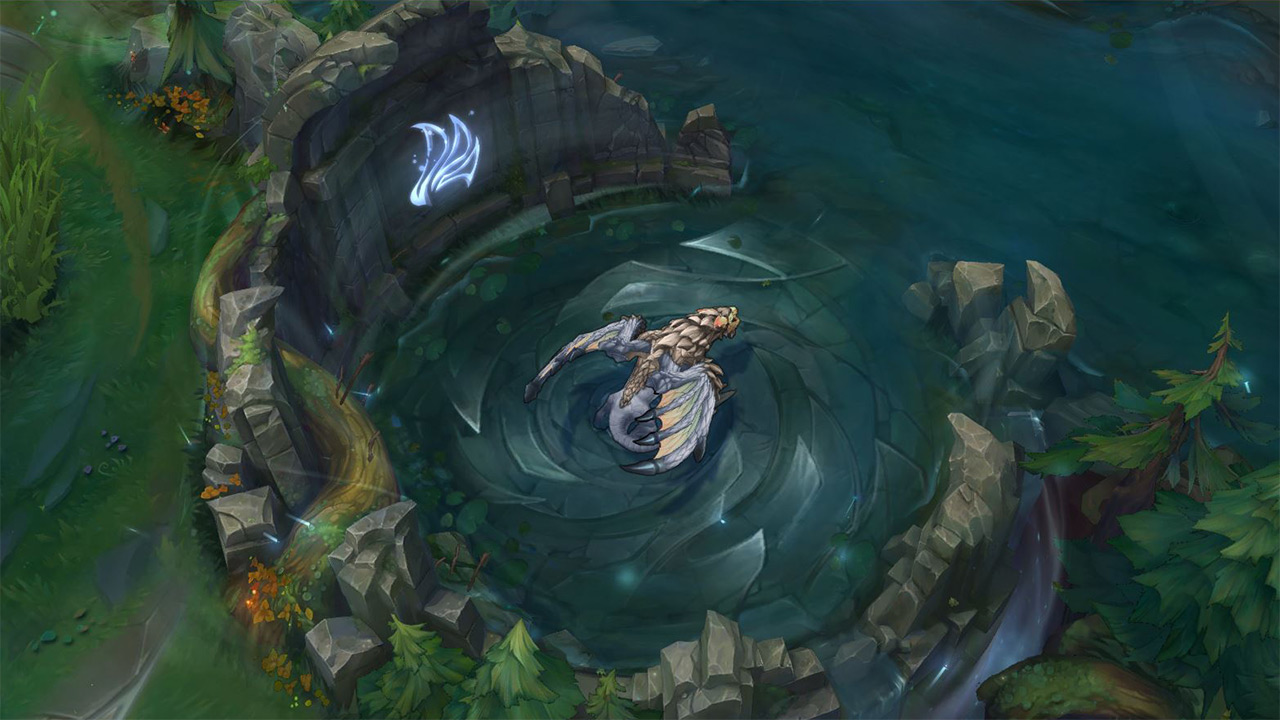 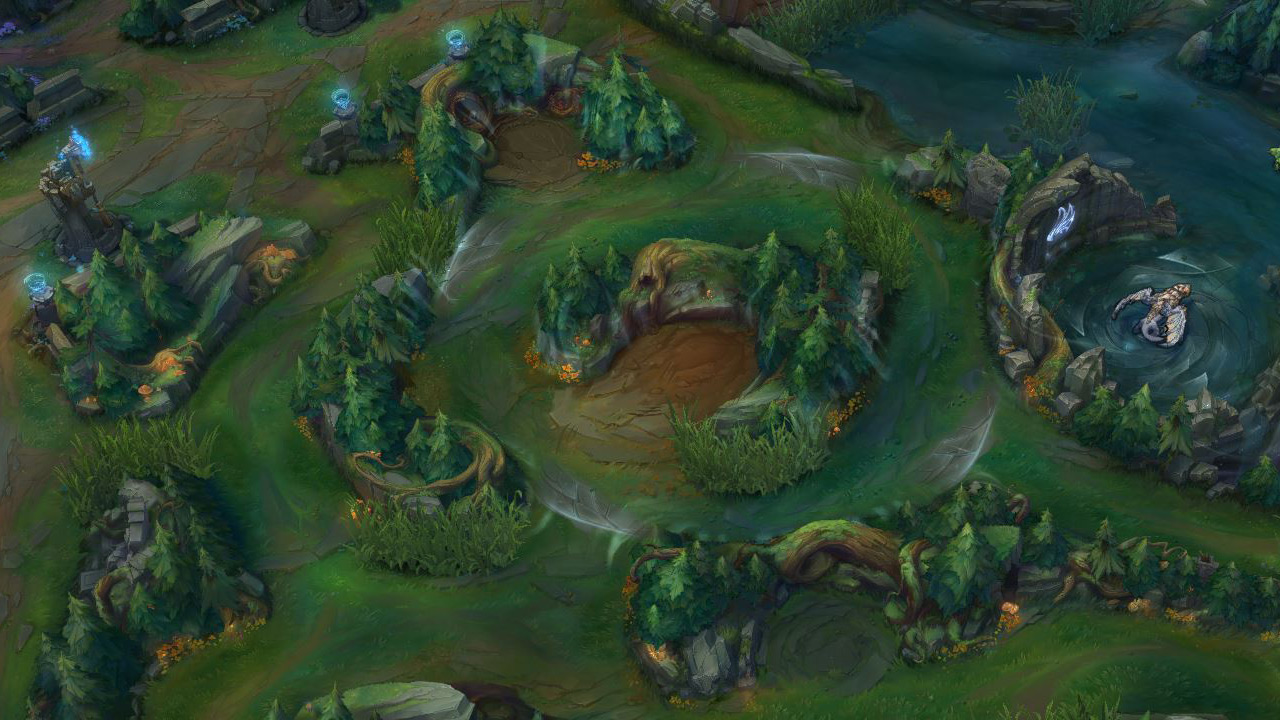 The Mountain Drake triggers a seismic shift throughout the Rift. Bluffs of rock erupt from the earth, making for some scary new choke points and ambush locations, most notably across the mouth of the dragon pit itself. Extra tight spaces give opportunities for big AOE wombos and create some interesting new hiding spots with fog of war. 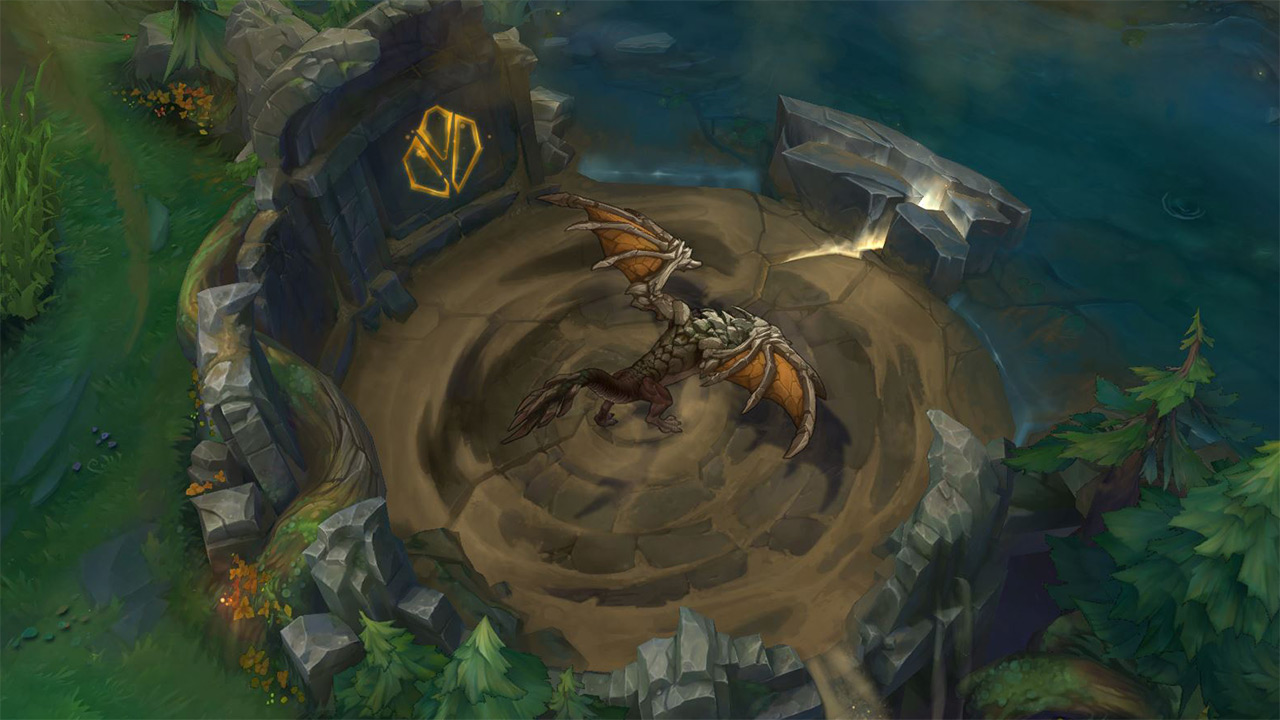 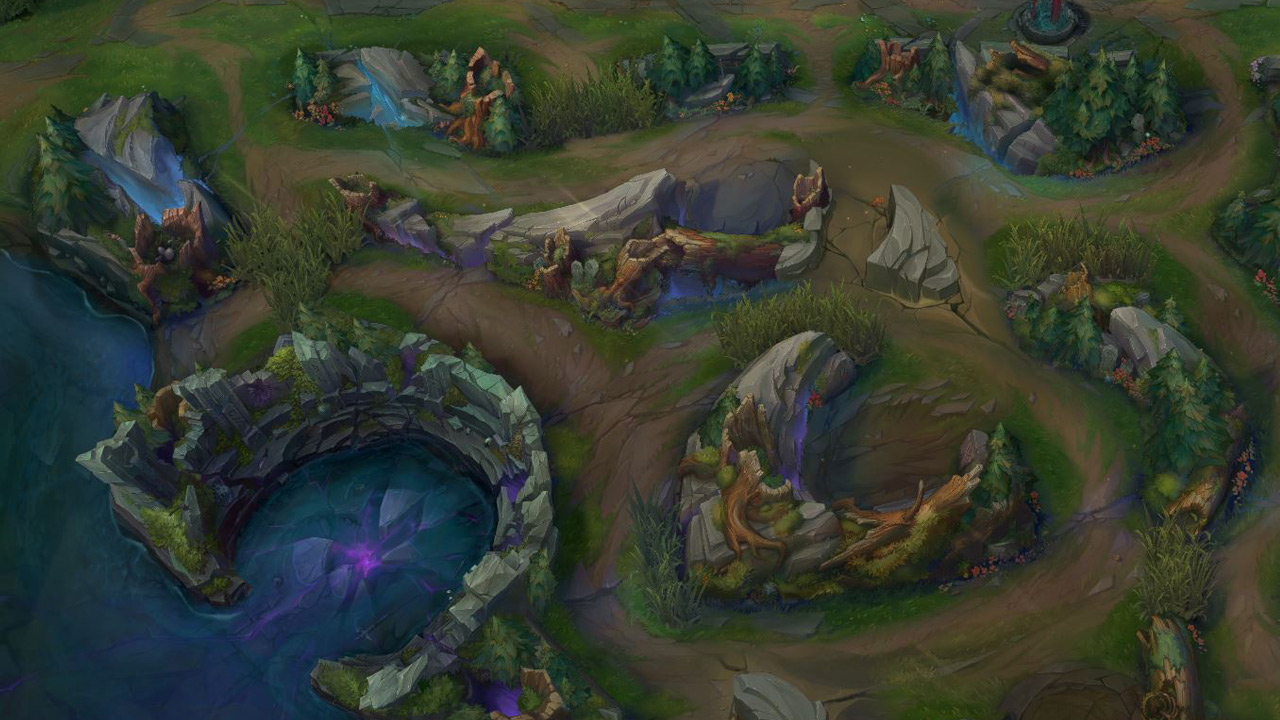 We wanted to make sure the Elemental Rifts are fair to both teams regardless of whether one team is ahead on drakes. Keeping your head in the game if you fall behind early can be hard enough as-is; we didn't want to make it feel like the map itself was trying to make you lose, too. When creating new layouts for the Rifts, we wanted to make sure each of them would be as exciting and fair as the base SR map. Both teams have the opportunity to exploit and master the new terrain equally, so the outcomes are still in players' hands regardless of which Elemental Rift takes shape.

Additionally, we wanted to ensure the Rifts feel intuitive, even in your first game. We avoided creating new gameplay mechanics in favor of expanding the SR elements you're already familiar with. We also made sure the changes always occur in the jungle near buff camps and dragon pit so that no matter which element you get, you'll interact with the layout changes around the same areas.

GOAL: The elemental buffs are more equal in both satisfaction and strength.

The Elemental Drakes themselves still grant different flavors of permanent, stacking buffs to your team when killed, but some buffs are now a little different.

When a team kills their fourth Elemental Drake, instead of stacking their elemental buff, they'll gain a powerful Dragon Soul from the dominant dragon. Dragon Souls persist through death and last the remainder of the game.

Once one team has claimed a Dragon Soul, it becomes the Elder Dragon's turn to defend the pit—this means only one team can have a Dragon Soul.

Elder Dragon still grants a powerful, short-term combat buff, and we're retooling it to offer teams who failed to claim a Dragon Soul a teamfight-focused hope of getting back into the game. To achieve this, we're removing Elder Dragon's scaling with Elemental Drake buffs (which favors the team that's ahead) and replacing it with a new execution component. If Elder's burn damage affects a low-health enemy champion, they’ll be consumed by a searing Elder Immolation—killing them instantly!

Enemies affected by the Elder burn have a small marker on their health bar, indicating the execution threshold. The execution has a brief wind-up, so with quick reactions, Immolation victims can avoid imminent execution with the usual suite of clutch save abilities or spells (Zhonya’s Hourglass, Kindred’s Ultimate, etc). The threat of Immolation will still be there when they become vulnerable again, so if the Elder buff burn is applied a second time, it’s back to the fountain!

Aside from the Elemental Rifts and other Dragon changes, we've made some renovations to other parts of Summoner’s Rift. We've created identical alcoves in top and bottom lane. Both alcoves feature three patches of brush on their outer edges and a small space in their center for champions to juke around or hide in. 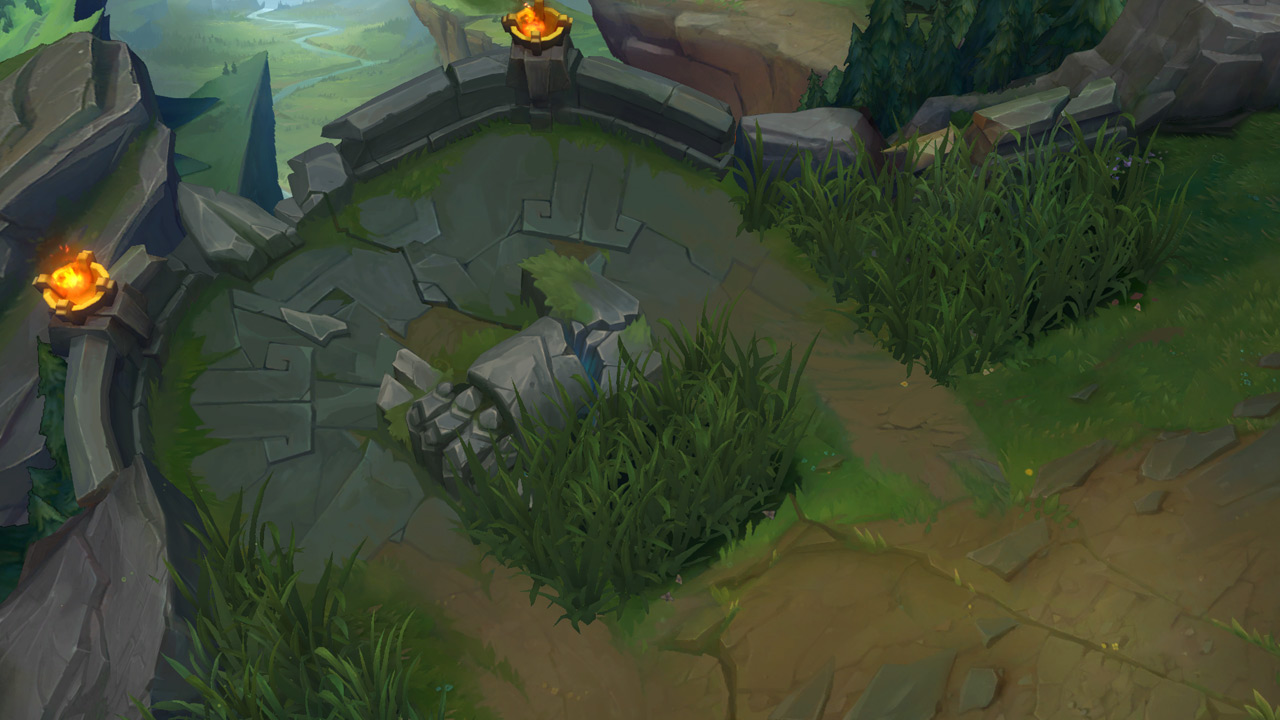 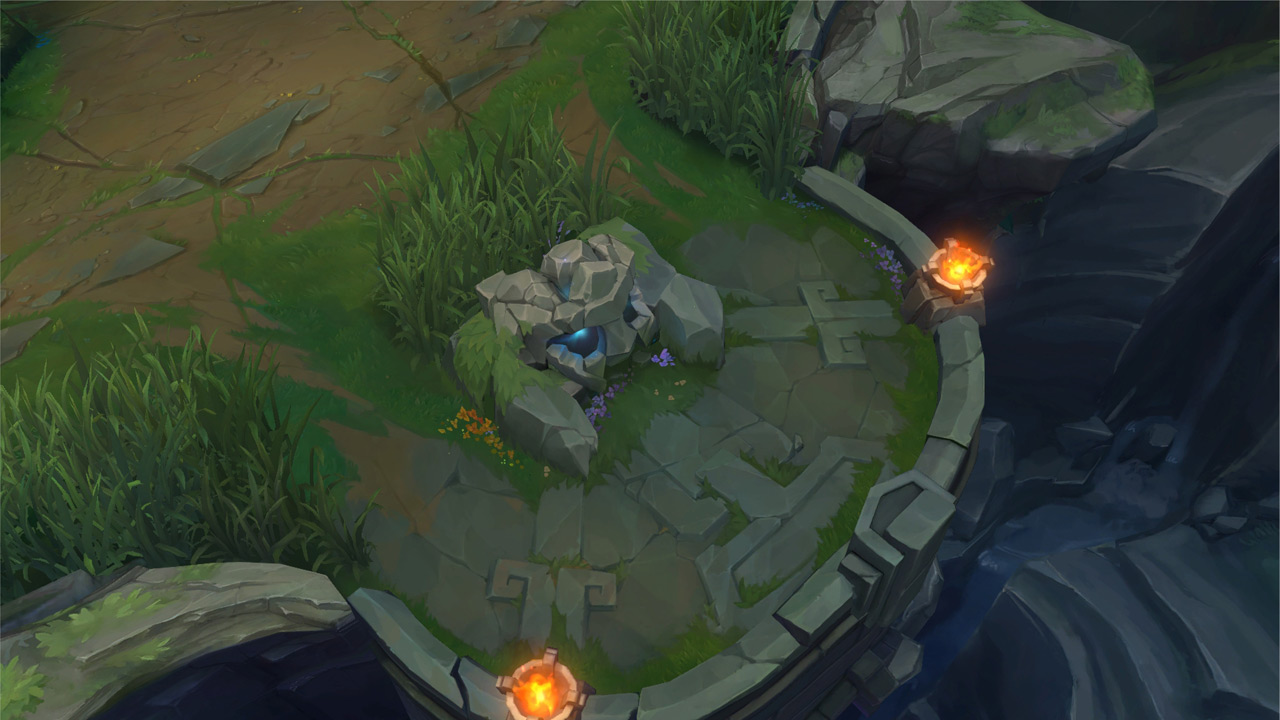 We don’t expect alcoves to be used constantly throughout lane phase. But every so often, players may turn a 2v3 into a double kill, or perhaps escape certain death due to the unique layout of an alcove. We look forward to seeing how players make use of them when they hit the Rift.

Finally, there are two new patches of permanent brush opposite the Baron and Dragon pits. These open areas to the river are high traffic, but lack the map features that create playmaking possibilities. New brush opens up a lot of new strategic and tactical options. 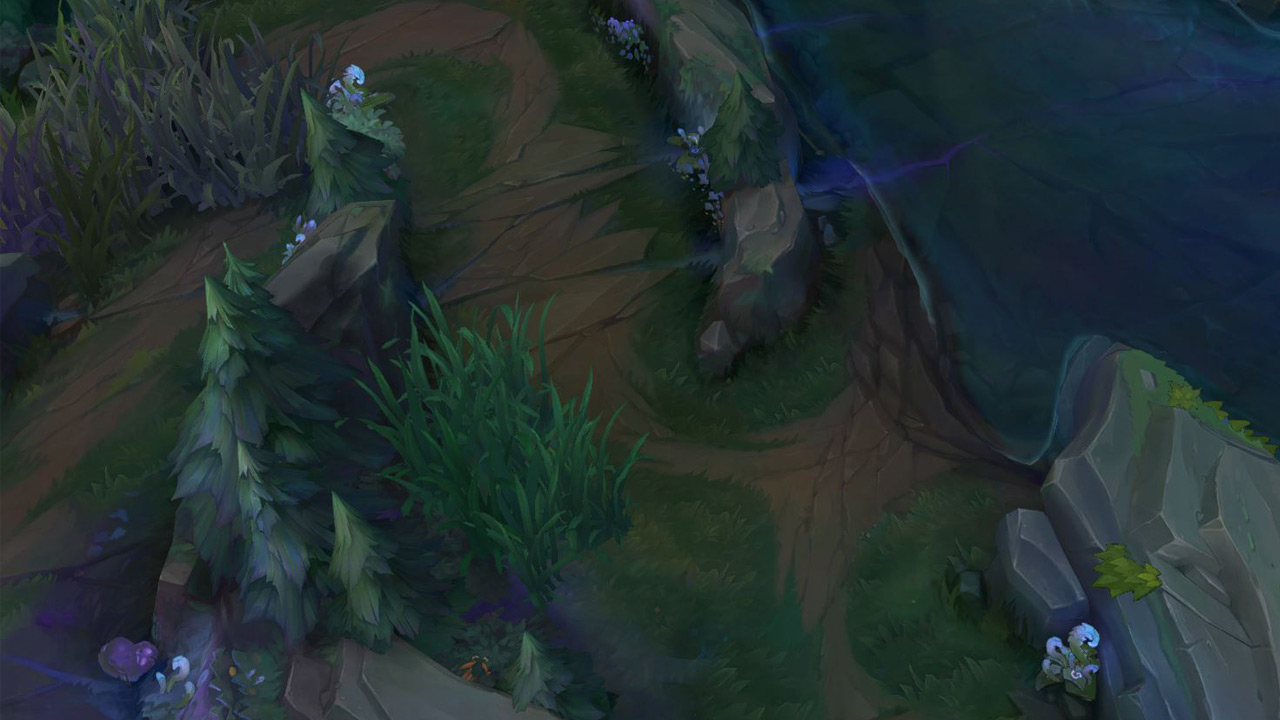 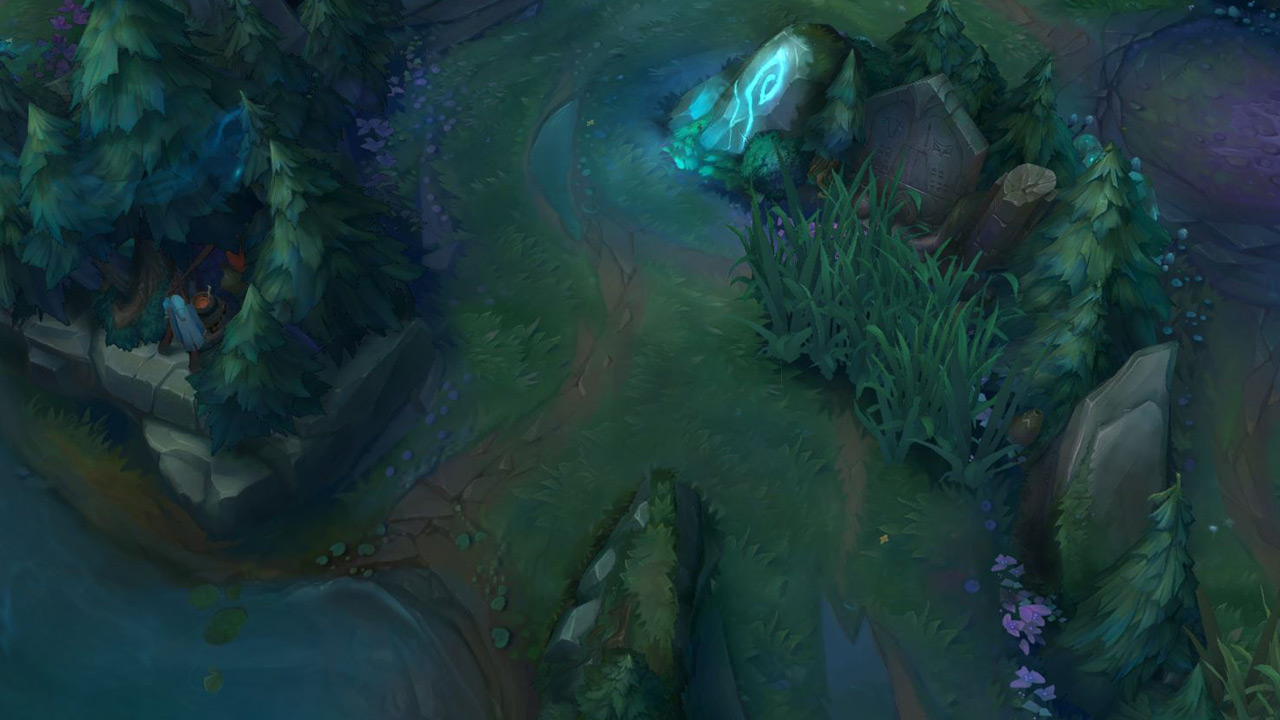 But it’s not all about the map! There’s a host of other new features and updates coming in preseason to address common frustration points in League.

Early jungling currently revolves around Krugs due to their high gold/XP tuning, resulting in pretty one-dimensional pathing and a heavy blue-side advantage due to bot lane's proximity to Krugs. We're making XP and gold changes in order to open up more diverse pathing options and jungle strategies—most significantly, reducing Krugs' value and buffing Gromp's so junglers can hit level 3 off any combination of outer camp (Gromp or Krugs), buff camp, and any third camp.

We’ve also added respawn timer icons (like you see on red and blue buff) to the minimap for every camp to help all junglers plan their next moves.

For a high-stakes solo lane, top hasn’t been able to translate a lane win into an effective mid and late game carry for their team—particularly in higher levels of play. Combined with this preseason's increased focus on Elemental Drakes drawing fights to the bot lane, we're shifting power around to give top laners better opportunities to translate their wins in lane into game wins.

Additionally, to balance out the map objectives a bit, we’re spawning Rift Herald earlier in the game and allowing her to respawn once if she is killed early.

We're refreshing support choices in the shop. They’ll be less poachable and have an expanded quest system that should be more satisfying overall. We're also reducing the current complexity and rules bloat of the lineup.

Towards the goal of creating more satisfying items, supports will no longer have to upgrade these starter items in the shop. Instead, the quest system now automatically upgrades items to their second and third tiers when milestones are reached, with the Warding passive baked into those upgrades:

This unlocks supports to begin progressing toward their item builds without having to spend their first 1500g on completing their economy item. These starting support items won’t carry as many stats as before, but we think this is a fair tradeoff for the jump-start supports are getting on their other items.

When assessing the play patterns of the income passives, Targon’s and Coin both encourage a safer, more sustain-focused playstyle compared to Spellthief’s aggressive one. To simplify the support item system, we’re removing Coin and allowing ranged champions to use the execute element of Targon’s passive.

Finally, we're adding a new poaching rule that significantly reduces the gold you get from minions if you're farming them consistently. The tuning we want should still allow supports to secure a last-hit every now and then or even farm an occasional wave like today; the penalty only kicks in if item holders begin farming like non-supports. This new rule also allows us to remove the current anti-poaching mechanics on Spellthief's (charge pausing on CS, nearby ally requirement for gold).

Lethality items are core for a pretty big group of AD assassins and fighters, but with only Duskblade and Ghostblade commonly used, choices feel limited. We want to make Edge of Night a more attractive option and add a fourth choice to the lineup:

Doubling the number of attractive Lethality items significantly increases assassins' ability to tailor their early builds to their matchup or game state, but we don't want to kill their later build variety by letting full-Lethality become optimal in every game. Individual items grant fewer stats but now feature a one- and two-piece bonus which preserves the power spikes of assassins' first big purchases. Since this set bonus stops at two, assassins should generally branch into raw-AD items like Guardian Angel or Black Cleaver after their two-item spike. Full Lethality should still feel like a strong option against exceptionally squishy comps, though.

We're removing Spear of Shojin. Its unique passive when used by the most synergistic champions is lowering the downtime of some CC, mobility, and immunity spells beyond what we think leaves healthy room for counterplay.

We’re also looking for other small improvements we can make across the item system from now through the launch of preseason.

Conqueror has been too effective at allowing sustained damage fighters to deal with tanks, who have lost their place in solo lanes as a result. We’re toning down the anti-tank nature of the rune by removing the true damage conversion and putting more power into the stacking adaptive force.

Kleptomancy has been commonly used as a way to generate lots of gold in an uneven matchup, like ranged vs melee top lane. We’re pulling power out of the “farm gold off of my enemy” pattern and pushing more into the early game elixir drops.

Aftershock continues to attract squishy champs looking to negate their intended fragility. We’re lowering the flat resistances more on this rune and buffing the power it gives to tankier champions.

Exact numbers and whatnot for all the changes we've just shared will be available soon on the PBE for an extended four-week cycle. Rise of the Elements ships with patch 9.23 in November!