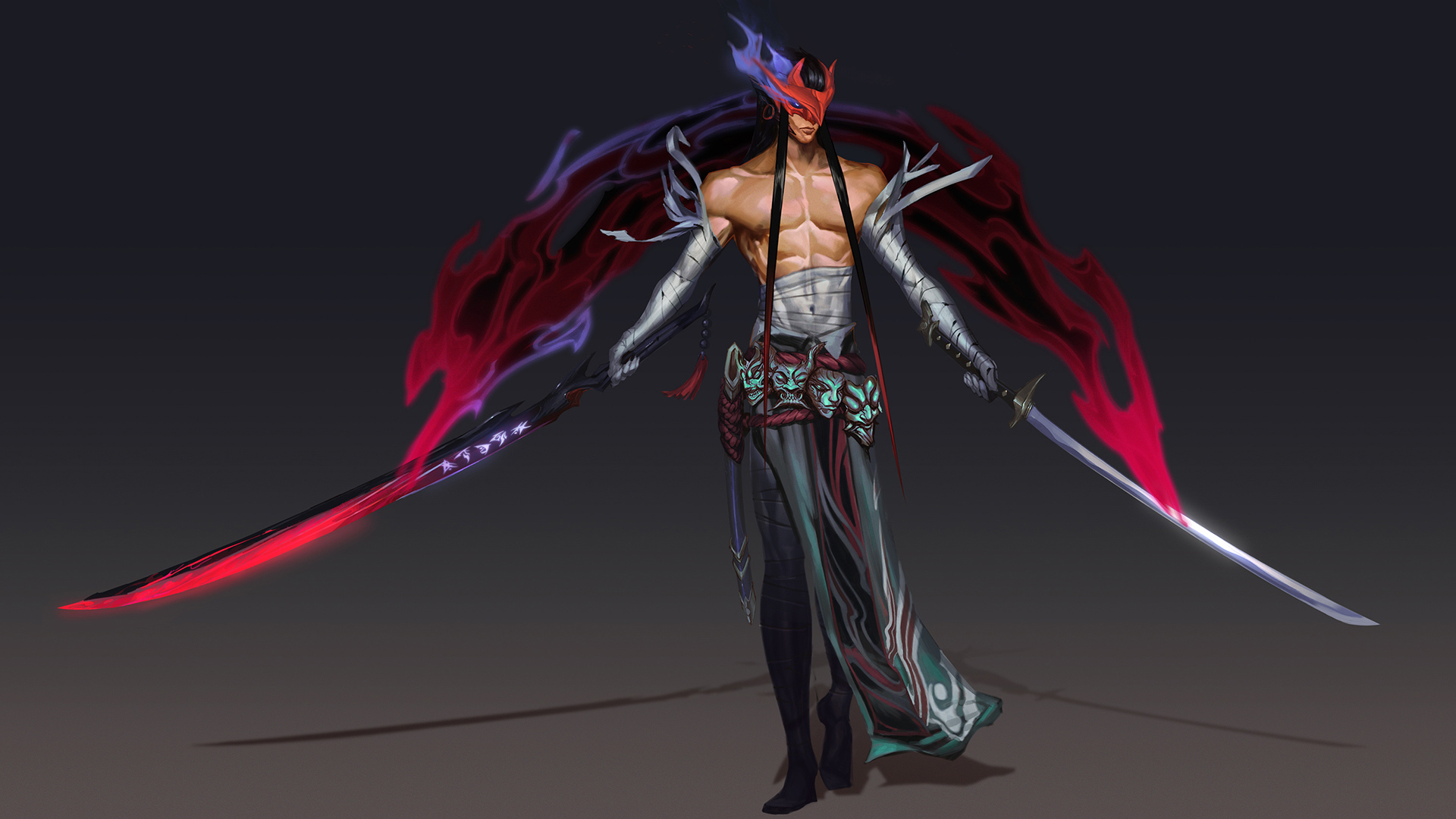 While you were playing Yasuo, he studied the blades.

What do Kai’Sa, Senna, and Yone have in common? If your answer is, “They can all be played bot lane,” well, yes… But the answer we were looking for is, “They all existed in the lore before my ban list.”

Yone is the third champion to come out of the lore and onto the Rift, and while we think his release is an exciting way to move League’s story forward, we’d be lying if we said it didn’t come with some unique complications. Up until now, Yone existed as a series of moments in Yasuo’s life. We saw him purely from Yasuo’s perspective, but that’s not enough to create a compelling champion.

So how do you turn a side-character into a protagonist (anti-hero?) while staying true to who they’ve been so far?

A Tale of Two Brothers

We first met Yone after he hunted down his brother, Yasuo—who then killed him. And for the last seven years, that’s pretty much all we’ve had: a quick glimpse at the worst moment in Yone’s (and Yasuo’s) life.

In order to bring Yone back from the grave, we needed to answer some questions first.

“The last time we saw Yone, he was presumed dead,” says narrative writer Michael “Riot Pls” Yichao. “I started off by exploring that maybe Yone hadn’t actually died in the first place, but that didn’t feel right. It didn’t do Yone justice, but more than that, it didn’t do Yasuo justice either. I really wanted to ensure that I furthered the story of these two brothers rather than rewrite it entirely or take away from what they’ve been through.”

Yone and Yasuo’s relationship has long been complicated. But before all the brotherly betrayal and murder, they grew up together and trained under the same master, which meant they should still share some similarities.

“Initially I wanted Yone to be sort of like an ‘echo fighter’ to Yasuo. We wanted to lower Yasuo’s pick rate, which sounds really weird! But it’s actually healthy for League,” says champion designer Jonathan “EndlessPillows” Fuller. “Yasuo is the highest played champion in League. Giving Yasuo mains another option with a similar playstyle helps increase champion diversity, and that keeps each game feeling fresh.”

But this approach didn’t really work. Trying to make a champion do the unique things Yasuo does without literally just making Yasuo 2.0 is pretty damn impossible. And after EndlessPillows iterated and iterated, it became obvious that there’s no way to out-Yasuo a Yasuo.

That’s when the team realized that Yone needed to be his own person. And beyond that, he had to actually stand apart from his brother.

“A lot of players were really excited when Yone was released as a card in Legends of Runeterra,” says senior concept artist Justin “Riot Earp” Albers. “His design in LoR was based on who Yone was at that point. He’s one of Yasuo’s followers, so it made sense to keep him similar. And it works so beautifully in card art. But because of League’s top-down perspective, it just wouldn’t give him the visual clarity we were looking for.”

Riot Earp tried drawing different versions of pre-death Yone—the only Yone we’d known so far—but each one looked too similar to Yasuo. And so the team started wondering if the Yone in League needed to be the same one we saw in LoR.

What if instead we showed Yone at a different time in his life? Or rather… the time after his death?

You Can’t Outrun Your Azakana

“I drew an exploration piece where post-death Yone was fully dressed in his traditional Ionian robe, but it didn’t feel right after he went through such a traumatic death,” Riot Earp explains. “It was important that we show that he had been mortally wounded, so that’s why he has bandages. After his death and the things he faced in the spirit realm… He had really changed a lot.”

“When Riot Earp showed us his design, it helped highlight the character and story differences we were going for,” Riot Pls says. “It really reflected the contrast between the two brothers and helped ground me there. Then I was able to focus on adding to the next chapter. What’s going on for Yone now? What’s his tension? What’s his purpose? That’s when I discovered the azakana.”

After dying, Yone found himself in the spirit realm. Normally when this happens, souls eventually find peace. But not Yone’s…

He was immediately set upon by an azakana, a minor demon that feeds off of negative emotions. Azakana are the weaker cousins of demons like Evelynn and Tahm Kench. And while those two embody primal emotions like desire and addiction, azakana are manifestations of more specific, personal feelings: gnawing self doubt, the fear of being forgotten, and so on.

The azakana that attacked Yone had been hunting him for some time, feeding on the negative emotions he harbored while tracking Yasuo. But Yone died before it had the chance to strike, and when he arrived in the spirit realm it saw an opportunity and struck, intent on devouring Yone’s soul. Yone managed to defeat it—or so he thought—but the consequences were severe.

The next thing Yone knew, he awoke back in the mortal realm with a mask affixed to his face—a mask in the form of the azakana he had just defeated, with the demon locked within.

But Yone isn’t a man possessed. As far as he can tell, the azakana holds no sway over him. Unlike Rhaast and Kayn, there’s no connection between them. But that’s not to say he didn’t receive some of its power.

Yone can literally tear his soul from his body, leaving his mortal form behind to traverse the spirit realm for a brief period of time. In game, this manifests as his E, “Soul Unbound,” where he unleashes an onslaught on his enemies, marking them with stored damage that, upon returning to his body, expires and deals true damage. But unlike Zed or LeBlanc, Yone gets no choice in whether he returns to his body—he must go back when the timer ends.

“When EndlessPillows discovered this mechanic, it inspired a lot of Yone’s narrative beats,” says Riot Pls. “At the time I thought that Yone existed purely in the physical realm, but the idea of him being able to project his spirit out really informed how he hunts and fights azakana.”

Uncertain why he was not allowed to die and worried about the mask affixed to his face, Yone began to hunt azakana in an effort to better understand the mystery of his own fate. He discovered that he could seal other azakana into inert masks by learning their nature and true name, and now strives to discover the name of his own azakana.

Azakana have always been around, but they’re steadily growing in number in Ionia due to the unprecedented suffering in the wake of the Noxian Invasion.

“One of the things I really like about the azakana is that it’s a meaningful way to anchor Yone and Yasuo to one another,” says EndlessPillows. “When Yone comes back, he’s not just trying to kill Yasuo because he killed him or their master. Things have progressed for the two of them. They each have their own goals, and I think that’s so important for champions in League. They need to be their own people.”

Hunting down azakana isn’t exactly an easy task, even for a guy who managed to kill one and steal its sword. Oh yeah. That’s right. Yone stole an azakana’s sword.

When Two Halves Become One

“Yone’s two different types of swords opened a lot of doors for us,” offers Riot Earp. “The azakana blade is really, really visually appealing and is unlike any other weapon in League. And his wind sword is the one he used before he died. The contrast between the two really excited me and the rest of the team. It led to some unique gameplay designs, too.”

Yone was originally designed to be a skirmisher, which his dual swords lent themselves to well. His human blade deals physical damage and his azakana sword deals magic damage, which gives Yone a mixed damage profile, letting him go toe-to-toe with even the beefiest of bois. “But the way he plays around his E and ultimate is really similar to an assassin,” says EndlessPillows. “He dives the back line and deals tons of damage to squishy carries. He plays sort of like a skirmisher-assassin hybrid.”

His Q, “Mortal Steel,” is dedicated entirely to his human blade—think Yasuo’s Steel Tempest—but instead of summoning a tornado to knock up his enemies, he harnesses the wind to dash to them, knocking them up in the process. And his W, “Spirit Cleave,” is dedicated purely to the azakana blade: a sweeping blow that deals magic damage to enemies in its path and protects Yone from harm with a shield.

“I really wanted to make each of Yone’s swords feel different. Although he has always used two swords, the weight and feel of the azakana’s blade is much different to his more familiar steel blade,” explains senior animator Adam “Cattlegrid” Turnbull. “To hint at this, we wanted to keep his steel blade attacks quick, while his azakana blade swings in large arcs, emphasizing its weight and size.”

*teleports behind you* Nothing personnel, kid

But even with Yone’s new azakana-hunter persona, he’s still Yasuo’s brother, and they still share similarities. Yone’s Q has the same ramping mechanic that Yasuo’s has. Their play patterns are similar, where they both want to dive the back line. And their mechanics compliment each other: In addition to Yone’s Q knockup, his ultimate, “Fate Sealed,” knocks up and pulls enemies in, giving every Yasuo the chance to land the perfect ult.

“All I know is that I can’t wait to play Yone as a support for Yasuo like a bad person,” Riot Pls laughs.

“Yeah, but then you’ll win the game because you’ll both hit your 0/10 power spike,” EndlessPillows jokes.